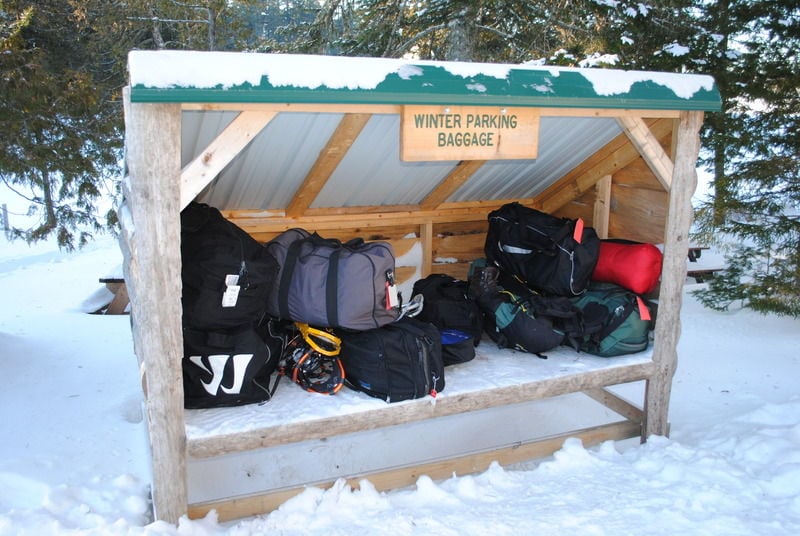 This small shed is where luggage is left for pickup by guests at the AMC's Gorman Chairback Lodge. AMC staff will transport one piece of luggage per guest by snowmobile from town to the lodge. 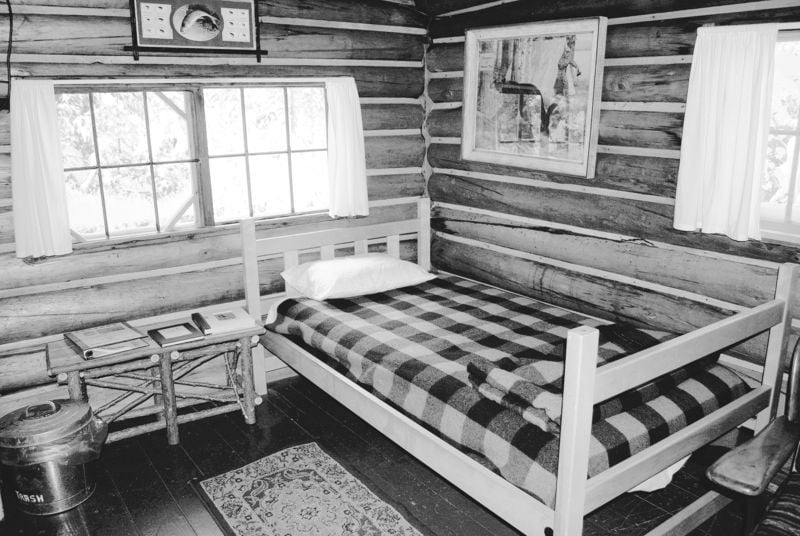 Here's the interior of a rustic cabin at the Appalachian Mountain Club's Little Lyford Lodge and Cabins, a backcountry wilderness lodge near Greenville, Maine. The cabin has no electricity, is heated by a wood stove and lit by gas lamp. 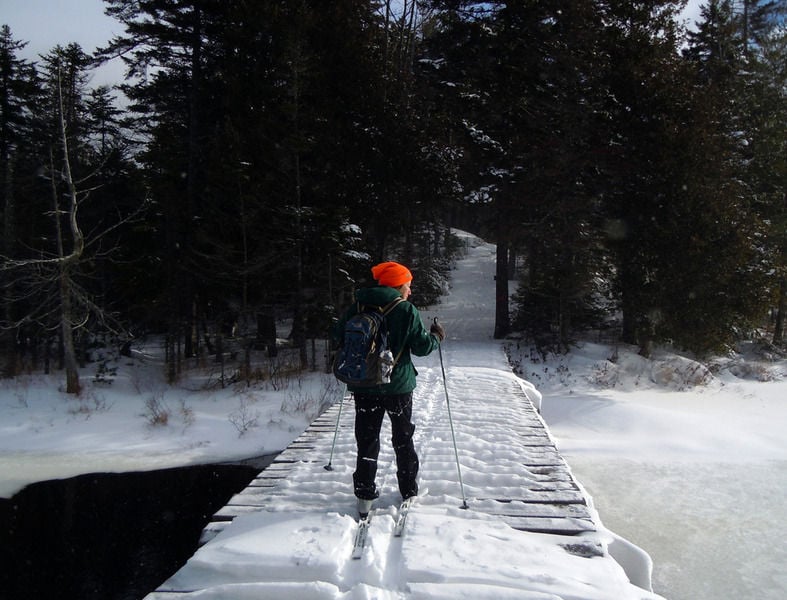 The author, Lynn Dombek, cross-country skis over a bridge on the Lodge to Lodge trail between camps at the Appalachian Mountain Club's backcountry wilderness lodge near Greenville, Maine. In winter, visitors can reach the lodges and cabins only by cross-country skiing in. 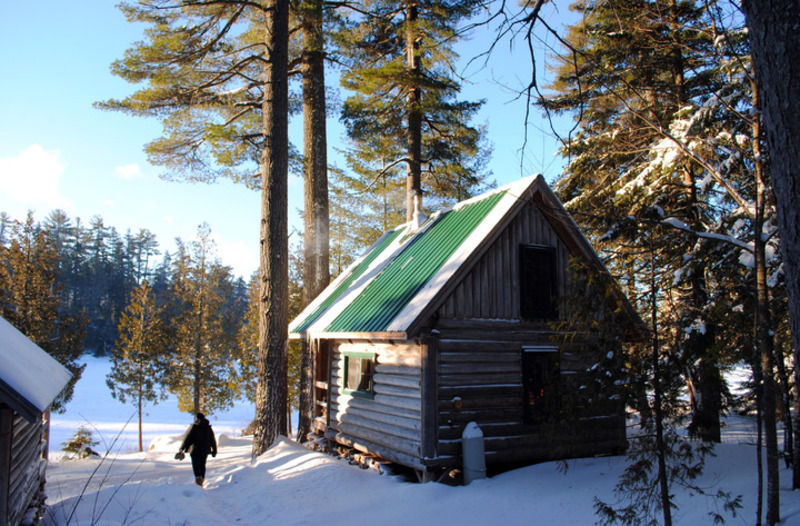 This rustic cabin is situated at the Appalachian Mountain Club's Gorman Chairback Lodge, a backcountry wilderness lodge near Greenville, Maine.

This small shed is where luggage is left for pickup by guests at the AMC's Gorman Chairback Lodge. AMC staff will transport one piece of luggage per guest by snowmobile from town to the lodge.

Here's the interior of a rustic cabin at the Appalachian Mountain Club's Little Lyford Lodge and Cabins, a backcountry wilderness lodge near Greenville, Maine. The cabin has no electricity, is heated by a wood stove and lit by gas lamp.

The author, Lynn Dombek, cross-country skis over a bridge on the Lodge to Lodge trail between camps at the Appalachian Mountain Club's backcountry wilderness lodge near Greenville, Maine. In winter, visitors can reach the lodges and cabins only by cross-country skiing in.

This rustic cabin is situated at the Appalachian Mountain Club's Gorman Chairback Lodge, a backcountry wilderness lodge near Greenville, Maine.

GREENVILLE, Maine — If you love the idea of cross-country skiing or snowshoeing through a snowy forest, stoking a wood stove at midnight, and eating great meals in good company around long wooden tables, then consider a winter adventure in northern Maine.

The Appalachian Mountain Club (AMC) operates backcountry lodges in the Moosehead Lake region of Maine near Greenville. During the winter, visitors reach the lodges by skiing in, and snowshoeing is also popular on nearby trails.

The trip is ideal for those who are moderately athletic, game to test their cross-country or snowshoeing skills, and not averse to extreme winter weather. If you’re sociable by nature, you’ll find your fill of community and conversation at the communal dinner tables. If you tend toward the solitary, that, too, is easily found in the private cabins and big wilderness of Maine.

My traveling companion, Donna Lawlor, and I set off for the lodges from Portland, Maine’s biggest city, in the midst of a nor’easter. The 150-mile (241-kilometer) car trip took five hours due to the storm.

We arrived in whiteout conditions at the AMC’s winter parking lot, where our luggage was picked up by friendly AMC staff on snowmobiles. Guests can have one item per person transported to the lodges this way, so you only need to carry a map and a backpack of basic emergency gear on the trail.

It was 22 degrees Fahrenheit with heavily falling snow as we headed to our first destination, Little Lyford Lodge and Cabins, by cross-country ski. The trail was snowed over as fast as workers could groom it. We struggled a bit in the strong winds and blowing snow, but slogged on. The 6-mile (10-kilometer) trek to the lodge took three hours.

The Little Lyford camps were built in 1874 to house lumbermen who worked the forests around the West Branch of the Pleasant River.

“The camps inherited their layout from the logging days — individual cabins cluster around a dining lodge that serves meals, with a pond or river nearby,” wrote Sarah Jane Shangraw in the 2005 issue of AMC’s Appalachia journal.

Indeed, as we skied down a hill into camp, you could almost imagine the scene 100 years earlier, with the rough log buildings and smoke curling out of the chimneys — until we spied two large solar panels on a south-facing hill.

The Lyford crew, led by manager Chuck James, was amiable and welcoming. After we were shown where the weather reports are posted and the location of the showers, sauna and composting toilets, we were taken to our little cabin on a hill. It was outfitted with bunks, a wood stove, a dresser and a gas lamp for light (no electricity). Perfect, I thought to myself, as I brought in more wood to stoke the fire.

All meals are included in the lodging rate (which starts at $101 a person for cabins), and the hearty dinner of warm soup, steak tips, rice and vegetables was served promptly at 6 p.m. (Vegetarian and other special diets can be accommodated.)

Lyford can house 50 people in its nine cabins and bunkhouse, but rarely has that many guests. At our first meal, 16 people sat at two long tables.

Our dinner companions ranged in age from 12 to 60-something, a mix of couples, families and friends. We talked about our next-day plans, comparing maps and routes.

Catherine and Curt Menyhart of South Portland were doing a 15-mile (24-kilometer) loop between lodges. Others were trekking to Gulf Hagas, a gorge also known as the “Grand Canyon of Maine.” We chose an ungroomed trail around two ponds. The trail’s 18 inches (46 centimeters) of newly fallen snow made a soft landing for the repeated falls I took while getting used to skiing again after a 25-year hiatus.

We also skied some of the groomed AMC trails, which are clearly marked and are rated easy, intermediate or difficult. Curt Menyhart puzzled awhile over the “C2C” marking on the trails he and Catherine took between two lodges until he figured out it meant “Camp to Camp.” Some trails also double as routes for snowmobiling, a popular sport in Maine.

“If we can help build a stronger economy by providing new opportunities for outdoor recreation and nature-based tourism, get local kids out through a concerted effort of environmental education, we’ll have succeeded in not only protecting a priceless natural resource but also in contributing to the overall health of the local community,” said AMC senior vice president Walter Graff in an email.

After two nights at Little Lyford, we spent our final two nights at the AMC’s Gorman Chairback Lodge and Cabins, which another guest, Dennis Encarnation of Boston, characterized as going “from rustic to deluxe.”

Unlike Little Lyford, Gorman’s four modern cabins have private bathrooms and electricity. Gorman also offers eight rustic cabins and a bunkhouse for 12. Meals are a bit more sophisticated than at Lyford, and you can buy beer or wine. It would be hard to mistake it for a 19th century logging camp, save for the towering pine trees that surround the older cabins by the lake. It’s charming, though, and the remote location does offer a retreat.

Encarnation’s wife, Kathryn Graven, said she wanted a getaway with no computer or phones; the couple and their two sons spent evenings playing games like Boggle and cribbage.

Our snowshoe trek the next day took us alongside Henderson Brook. We could hear it running under the snow and saw it in open spots in the ice. It was snowing again and the winds blew hard through the high tops of massive pine and hardwood trees on the ridge. The crackle of beech leaves still clinging to frozen branches complemented the shush-shush of our snowshoes through the deep snow. In a few spots, we used ropes the AMC strung across the brook to move ourselves along.

By our last day, the snow had stopped but the temperature had fallen to 8 degrees Fahrenheit, with winds gusting to 44 mph (71 kilometers per hour). To return to the parking lot, we chose a trail that was longer than our original route but more protected, the 8-mile (13-kilometer) Long Pond trail.

We arrived at our car tired but happy a few hours later. The North Woods of Maine are a magical place, and well worth the trek to reach them.

If You Go Appalachian Mountain Club Maine Wilderness Lodges: Located 20 miles east of Greenville, Maine, in the Moosehead Lake region; www.outdoors.org/mainelodges. Lodges are open late December to early March and mid-May to late October. Getting there: Nearest commercial airports: Bangor, Maine (70 miles from Greenville) or Portland, Maine (150 miles). Boston is 265 miles away. The drive from Greenville to the AMC winter parking lot is 11 miles tp a plowed forest road followed by 6 to 8 miles of groomed cross-country ski trails to access the cabins. Cabins are vehicle-accessible via unpaved roads in summer. Rates: Winter per-person lodging includes sit-down breakfast and dinner plus bag lunch starting at $101 daily for Little Lyford cabins, $66 for bunkhouse. Rates are higher for Gorman Chairback and vary by date. Gear rental: Northwoods Outfitters in Greenville, www.maineoutfitter.com.