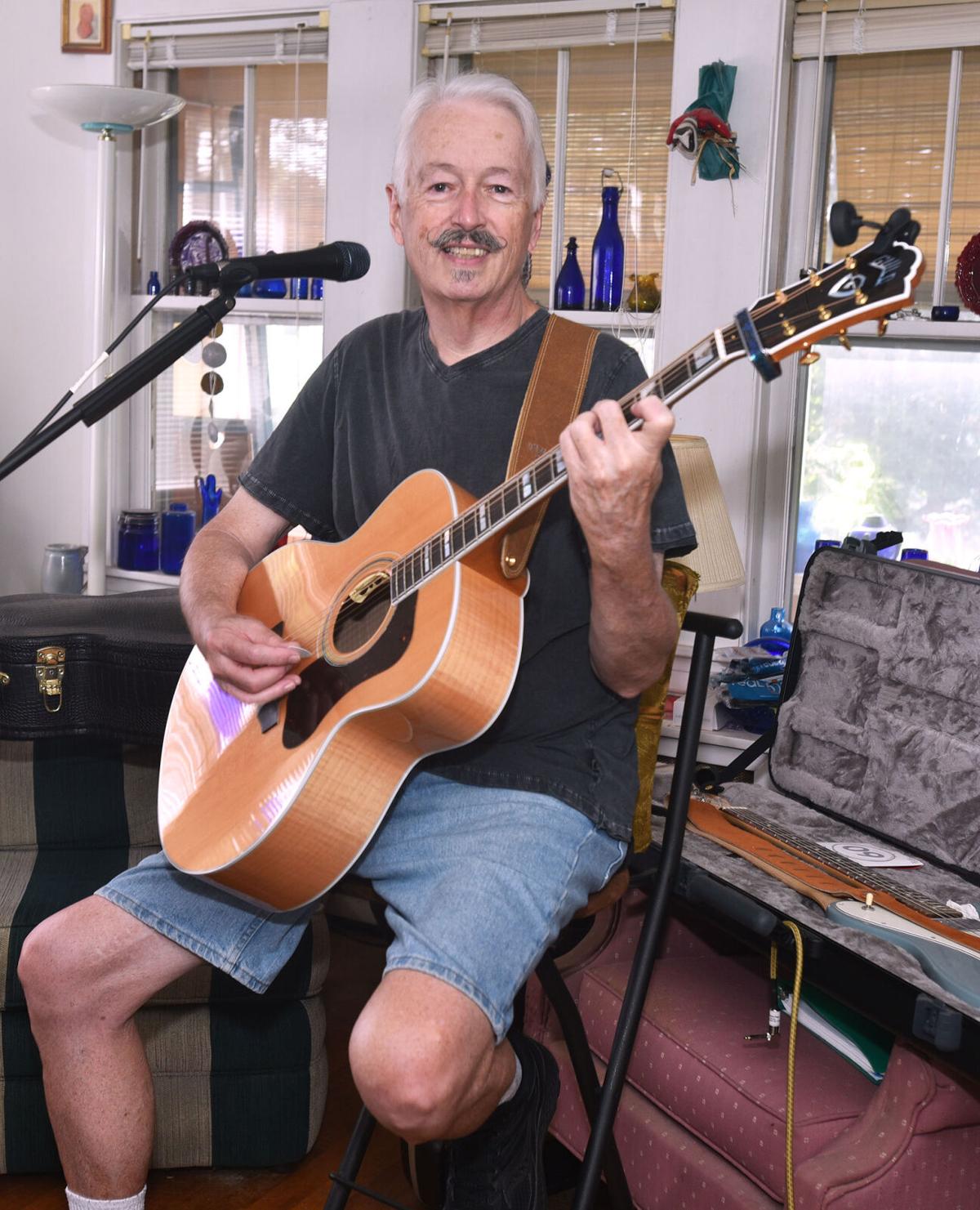 Musician Ric Page, who lives in Haverhill, has put out a CD of songs that draw on his struggles with cancer. 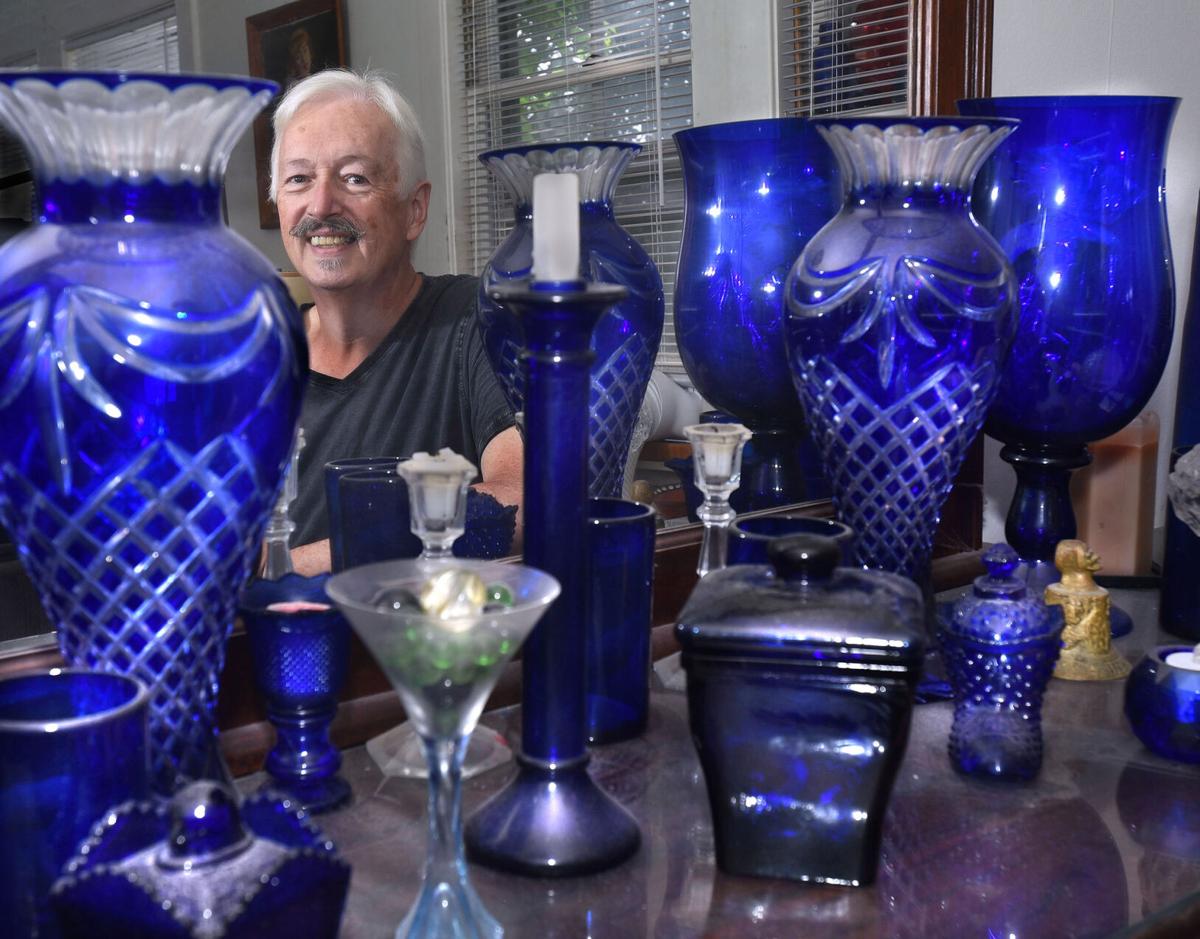 Ric Page is reflected in a mirror at his Haverhill home, framed by his collection of cobalt glass. 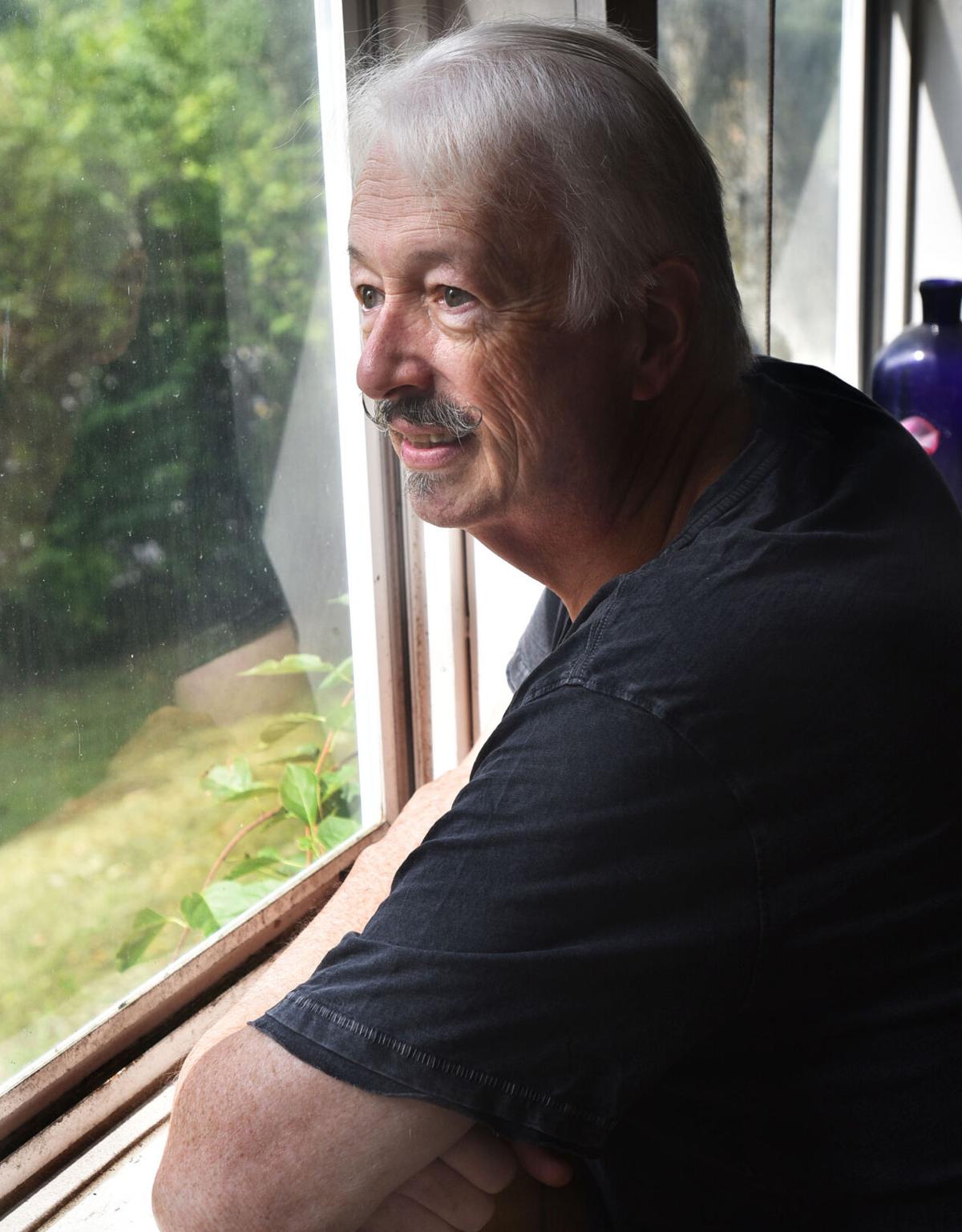 Ric Page shares his experiences with breast and bladder cancer on his blog.

Musician Ric Page, who lives in Haverhill, has put out a CD of songs that draw on his struggles with cancer.

Ric Page is reflected in a mirror at his Haverhill home, framed by his collection of cobalt glass.

Ric Page shares his experiences with breast and bladder cancer on his blog.

The main difference between male and female breast cancer is that men get it far less often than women, accounting for less than 1% of all cases.

Haverhill native Ric Page is one of those rare cases. He was diagnosed with breast cancer in 2014 and fought it for three years.

“Cancer is cancer, and the way it grows and takes hold knows no gender,” he said.

Page also knows that, while 1% of one year’s worth of breast cancer diagnoses means thousands of men get the disease every year, that fact remains obscured.

“Most people are shocked that breast cancer is not just for women,” he said.

But the relative rarity of male cases also gives a unique relevance to a blog that Page kept during his years with the disease, “My Challenge,” which records his daily struggles with breast cancer, tests and treatments.

“When this first started, many friends and family wanted to know things, and I got sick of saying the same thing over and over,” Page said. “So I decided I would have one repository that people could look at at their leisure.”

Page, who lives a mile from where he grew up, has had a dual career as a musician and state employee. He is retired now after working for many years at the Registry of Motor Vehicles, where he was eventually promoted to deputy registrar, and he also applied his managerial skills in several other government agencies.

That means he had a lot of co-workers who followed his blog because they were concerned about his health, “which was nice,” Page said.

The procedures he describes in entries included a mastectomy and sentinel node removal at Holy Family Hospital in Methuen, followed by an “edge” cleanup or second surgery to get rid of all the cancer cells.

In addition, Page underwent 12 weeks of chemotherapy, along with breast and nipple reconstruction, and received a nipple tattoo. These were followed by what he describes as “five years of chemo-lite.”

“Enough stuff transpired that I figured, I’m going to capture this,” Page said. “I would sit down and do it. To me, writing comes easily and so I would just do it and look at it after. I’m my own editor.”

There are 13 entries in March 2015, the first month he started writing, and these are followed by 119 more in the years that followed, all chronicling what it means to live with cancer.

“It was therapeutic for me to be able to do it,” Page said.

It was also therapeutic for Page to go back and reread what he had written, and recall details about what he endured that he had forgotten.

“Going through it helped me take some of the negativity of the whole experience and turn it into something positive,” he said.

Primarily, that was to let other people with cancer know that “you can survive this,” a message that he started to share in his music.

Beginning in 1968, Page’s musical career consisted of playing guitar, keyboards and bass in bands, usually with his brother, while adapting his sound to changing tastes.

That progression overlapped with 20 years in a “general business” band called Family Affair that played anything from jazz standards to whatever was new, at weddings, college parents’ weekends and other “events with food.”

“Family Affair, at the time, they were the premier general business band out there,” Page said.

He still plays in some bands, but Page started to perform solo during his recovery, and he tackles cancer in a number of songs that he wrote and recorded for a CD, “Tales From the Big C.”

“Some of them were so difficult for me to play and sing and record because it brought me back there,” Page said. “But when I do those songs live, I get some good feedback from people. Some give me a hug and say, ‘I’m sorry you had to go through that. That song is so heart-wrenching.’”

It has been especially gratifying for him to connect with other men who have survived breast cancer, who often feel stigmatized by their diagnosis, which has led to their isolation.

“A lot of men don’t want to admit they have breast cancer,” Page said.

He has learned a lot about cancer since his diagnosis, but said that it has also reminded him how little he knows about the disease.

But Page said the hormones, testosterone and estrogen, are both present in everyone’s body, and his cancer was “estrogen fed,” leading to the abnormal growth in his breast.

“Everyone has cancer, but the body is amazing enough that it knows that it doesn’t belong, so it attacks it and gets rid of it,” Page said. “But some cancer cells are sticky, and they happen to stick to a wall and grow, and that’s when there are problems.”

He wonders if some medications he took may have contributed to the development of his disease. But he knows for sure that cancer has been a scourge in his family, in which Page is the middle child among seven siblings.

Page is also confident about the link between his chemotherapy, which stopped in the fall of 2015, and the cataracts he started to develop a few months later, which finally led to surgery this year.

In an ironic development, one of his early scans revealed that he had an abdominal aortic aneurysm, or AAA, an enlargement of the aorta that can be fatal if it bursts.

“That’s why the doctor said, ‘Your cancer saved your life,’” Page said. “My mother died from triple A, but I must have forgotten it.”

The hereditary condition was unrelated to his cancer. His uncle also had surgery for AAA, which Page describes as “one of those things you don’t know you have until it’s too late.”

But while Page thought he was done with cancer when he closed his blog in 2017, he returned to writing entries after he noticed blood in his urine, then discovered in June that he has bladder cancer.

“As my sister says, all my warranties are expiring at the same time,” he said.

Page has a cystectomy scheduled for October and ends his most recent blog entry, on Sept. 13, with a promise that there will be “More to come!”

“My Challenge,” which can be read at http://rrpage0952.blogspot.com, has received more than 12,000 visits since it started.

An overwhelming majority of breast cancer patients are female. In fact, the National Breast Cancer Foundation reports that less than 1% of all breast cancer cases develop in men. However, BreastCancer.org notes that more than 2,600 men are expected to be diagnosed with breast cancer in 2021. Men who overlook breast cancer and its potential symptoms could be putting themselves in jeopardy, however unlikely that may be.

Instances of male breast cancer are so rare that the disease has not been the subject of substantial research. But researchers have learned that various factors can increase a man's risk for breast cancer.

Learning these risk factors is important, as men are not typically screened for breast cancer, which means it's often diagnosed in its later, less treatable stages.