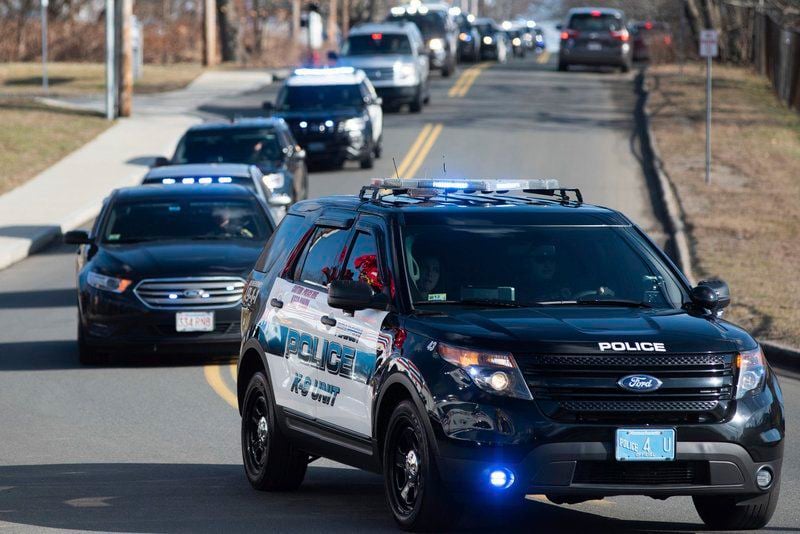 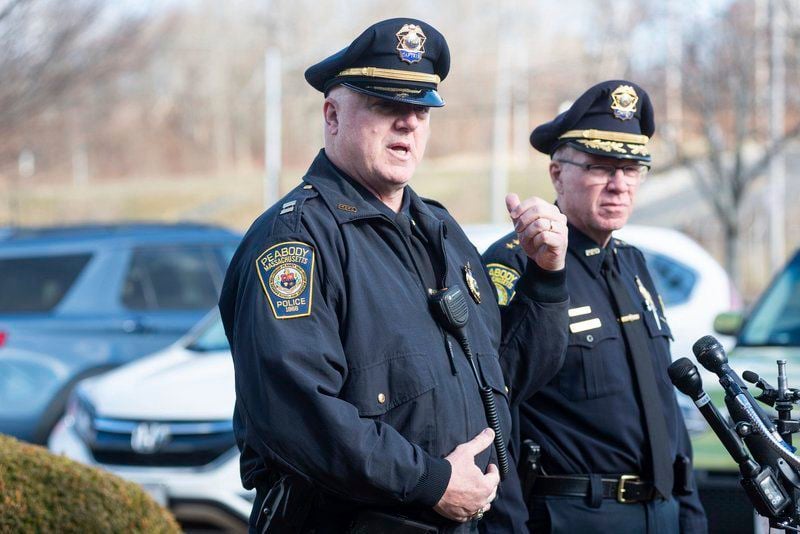 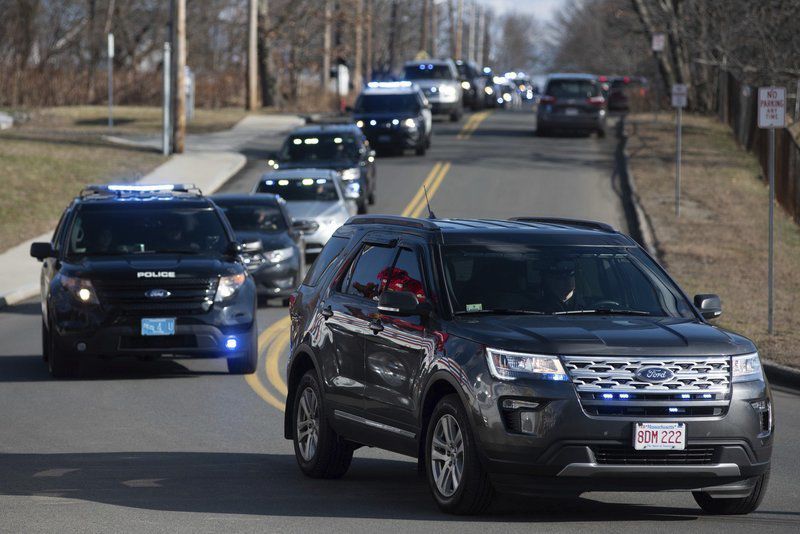 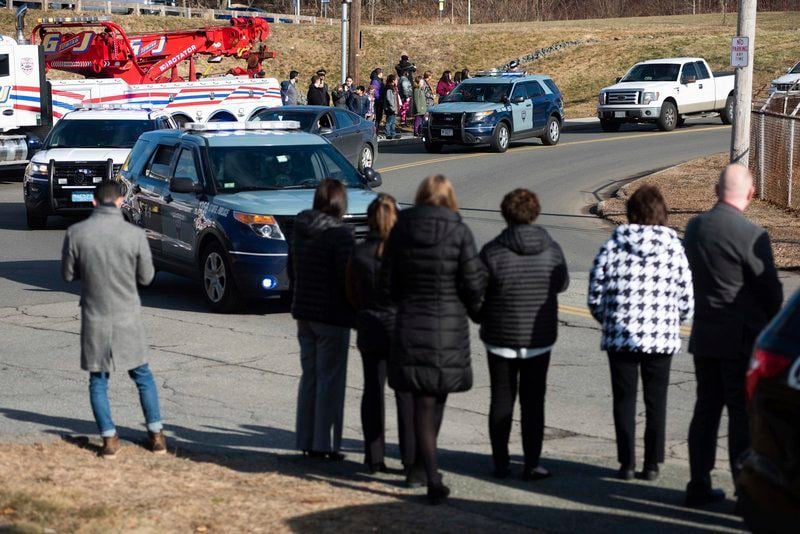 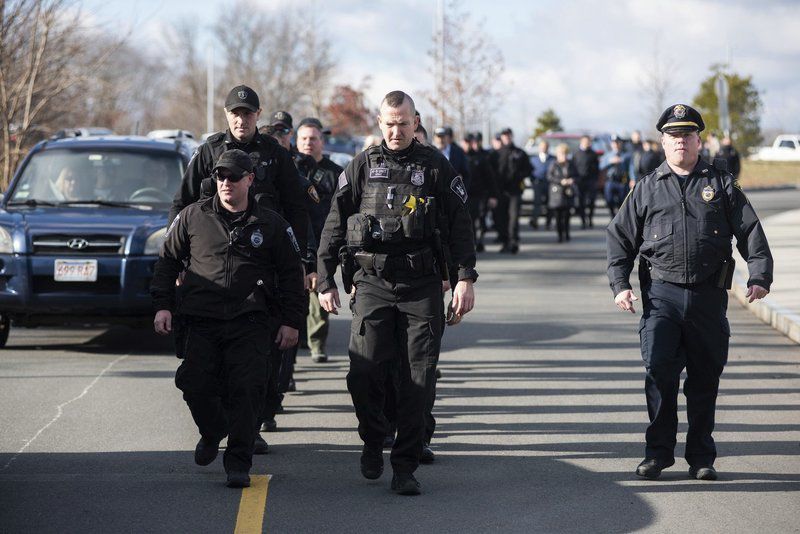 PEABODY — The sign board in front of the police station on Allens Lane flashed "Rest Easy Good Boy" Wednesday morning, as a procession of at least 30 K-9 units from across eastern Massachusetts circled the building for Peabody police K-9 Caine's final ride.

Caine, a 4 1/2-year-old German shepherd from Hungary trained to detect explosives, had been a member of the department since 2016. But he took ill last week and could not recover, police said. His partner and handler, officer Corey Salvo, and Salvo's wife were by his side when he died at Bulger Veterinary Hospital, according to a Peabody Police Department social media post.

Salvo has been with the department for more than five years.

On Wednesday, K-9 units from state police and many surrounding towns paraded down Route 114 with their lights flashing, escorting Caine from Bulger Veterinary Hospital in Lawrence to Peabody.

In a video posted to Facebook by the animal hospital, Salvo, in his K-9 officer's uniform, can be seen carrying a cremation box holding K-9 Caine's remains to his police cruiser for the 17-mile trip to Peabody. Various K-9 units, the officers and their dogs, saluted standing in a line as Salvo walks past them.

Some dog owners and about two dozen students from the nearby Higgins Middle School stood on Perkins Street as the procession headed to the police station. Two massive tow trucks from G/J Towing and Recovery were also parked nearby to show respect to the K-9.

"Some of the kids had heard the dog had passed away, so they had asked questions about it," Watson said, "so we are here with Officer Colella to just pay our respects."

Salvo's friend Adam Mekedem of Peabody, a professional dog trainer who managers Loyal Canines in Beverly, and his Dutch shepherd, Mars, were among those lining the streets for the procession. Mekedem had helped to train Caine.

"He's a good boy," Mekedem said of Caine. "Corey's a great guy, so I want to wish them the best."

As the K-9 units passed, the police dogs could be heard barking from inside.

Danvers K-9 officer Justin Ellenton led the contingent of K-9 officers from an upper parking lot adjacent to the Higgins Middle School to the police station, where law enforcement were invited inside to pay their respects.

"We just wanted to come out and thank everybody for the support that we've seen in the last week or two," Griffin said. "It really means a lot to us. Caine was a special member of the department, as you can imagine. He meant a lot to us. He meant a lot to officer Salvo. Both of them together did a tremendous amount of good work here in the community helping people. And, you you know, it was very sudden and very shocking to us that this happened and we are very saddened by it."

Richards, who oversaw the K-9 unit, explained that Caine came down with a sudden illness on Jan. 8. Salvo brought him to Bulger Veterinary Hospital.

"After extensive testing it was determined that the illness he was stricken with, he couldn't recover from that. So, the difficult decision was made to let him peaceably go, and that's what happened," Richards said.

Richards described Caine as a "dual-purpose" K-9 dog, he was a patrol dog and he was also an explosives detection dog. As a patrol dog, Caine would help locate missing people, including those with Alzheimer's, children or suspects. He had found at least 30 people and was deployed 280 times.

As a bomb detection dog, he would sweep the Northshore Mall and the schools anytime there were events.

"He was sent out of town often, to assist other agencies with their similar issues," Richards said. "So, he was constantly in demand, I will tell you that."

Peabody's K-9 unit was also part of the Northeastern Massachusetts Law Enforcement Council, or NEMLEC, connecting the Peabody department to others with K-9 units.

Richards called Salvo "a hard working kid. He's well thought of, as you can see with the response that we got from the other police departments. The K-9 community is sort of a tight-knit community."

Richards said the loss of Caine will be tough because he was so useful for the department.

"We are planning on replacing Caine fairly quickly, and getting Corey back in the K-9 business, so to speak. But he was a tremendous asset to us," Richards said. Without his partner, Richard said Salvo was "a little lost at the moment, but we are going to do what we have to do to take care of that."

The death of Caine has left the department without a police dog. Griffin said he spoke with Mayor Ted Bettencourt about getting a replacement K-9 to keep the program going.

"Corey is taking it as one would expect," Richards said. "Corey had the dog 24/7, he lived with him at home. He was with him literally just about 24 hours a day, seven days a week. So, he's much better today, but at the beginning it was a very difficult thing for him to deal with, and I'm sure that will continue, but he's doing much better today than he was a few days ago, that's for sure."