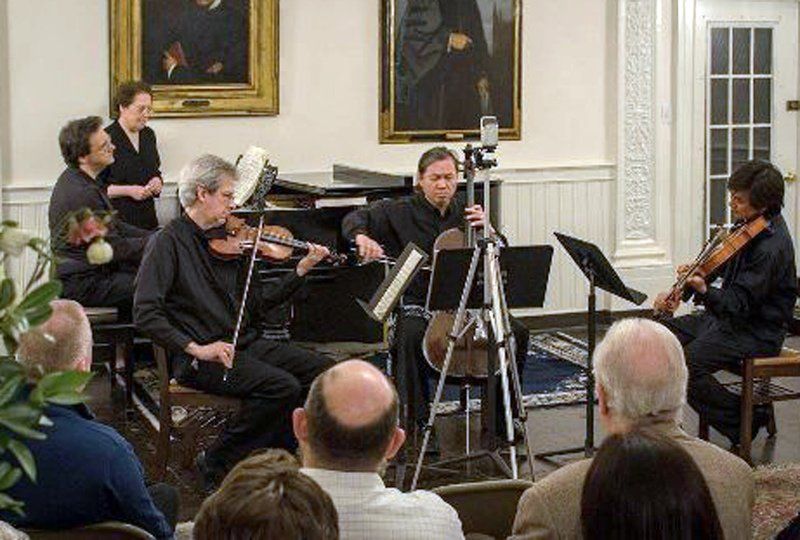 Courtesy photoPerforming in a concert at the Church of the Ascension in New York City is piano virtuoso James Bassi, a Haverhill native. He is joined by Roy Lewis on violin, Junah Chung on viola and Andrew Kim on cello.2/5/15 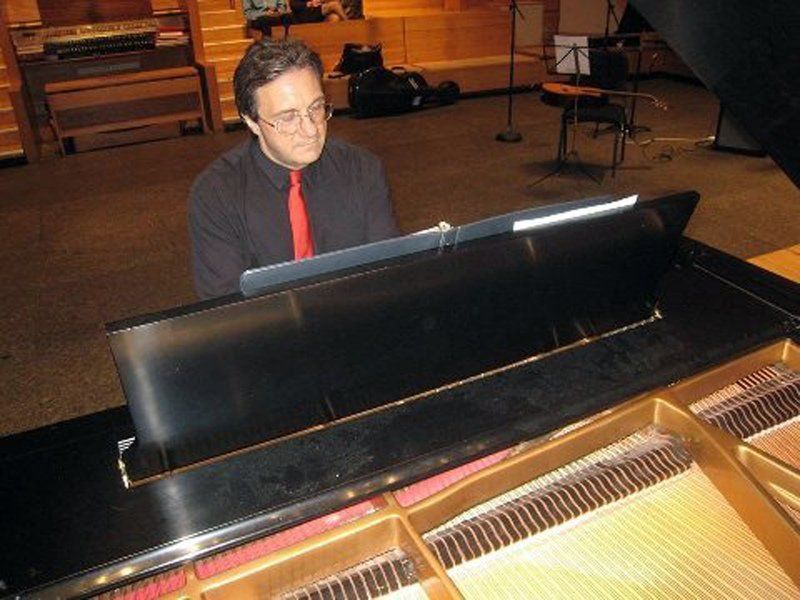 Courtesy photoHaverhill native James Bassi at the keyboard composing his world premiere music piece marking the 70th anniversary of the liberation of Auschwitz.2/5/15

Courtesy photoPerforming in a concert at the Church of the Ascension in New York City is piano virtuoso James Bassi, a Haverhill native. He is joined by Roy Lewis on violin, Junah Chung on viola and Andrew Kim on cello.2/5/15

Courtesy photoHaverhill native James Bassi at the keyboard composing his world premiere music piece marking the 70th anniversary of the liberation of Auschwitz.2/5/15

Each was a death camp that contributed to the mass extermination of 6 million Jews by Nazi Germany during World War II.

Now, on this 70th anniversary of the Holocaust, a Haverhill native has stepped forward with a presentation marking the liberation of Auschwitz. His work has taken the music world by storm.

James Bassi calls his work "Five Prayers.'' He debuted it Jan. 27 at the University of Minnesota with a full orchestra and chorus.

The January date coincides with the takedown of Auschwitz in 1945, bringing an end to this horrific chapter of world history.

"My oratorio reflects a journey of the human spirit,'' Bassi said of his musical presentation. “By turns, it honors the struggles, mourns the tragedies and celebrates the triumphs of all Jewish people and, by extension, the whole human race. As a means of opening up the expressive and dramatic scope of the chosen texts, I allow the sung language to fluctuate somewhat freely back and forth between Hebrew and English.”

An oratorio is a large-scale musical work for an orchestra and singers, typically a narrative on a religious theme.

The idea for the piece originated a year ago over dinner, when Bassi met with two musical colleagues: Dr. Sean Vogt and baritone Aaron James. The question Bassi posed to himself was one of capability and logistics.

"What could I possibly contribute to commemorate such a momentous, historically important event as the liberation of Jews from the horrors of Auschwitz?'' Bassi said. "It seemed such a daunting experience.''

Bassi undertook the challenge. In addition to his work as a composer, pianist and music director, he is also a professional choral singer. His experiences have included more than 30 years of singing services in various New York area temples and synagogues.

"It’s given me some familiarity with Jewish liturgical music and the Hebrew language,'' he said. “When I set out to compose 'Five Prayers,' I decided from the very beginning that I would not attempt to simulate an entire musical and cultural history of which I am not directly a part.''

Instead, Bassi selected sacred texts appropriate for this occasion.

The five movements are each counterpart to one another. The first psalm is a song of joy, praising God with deep enthusiasm. The second is a hymn portraying a people confident in their faith, followed by an elegy which speaks of people enslaved.

The fourth movement is titled “Meditation,” a journey inward, an opportunity to reflect and connect with the soul. He concludes it with the final — "Hayom'' — the Hebrew word for "today,'' reflecting upon struggles of the past while gathering the strength to step forward into better days.

Planting the seeds of music

Bassi grew up on Pilling Street in Haverhill's Mount Washington area. He has maintained a close connection with Mary Gullo, the piano teacher from his youth.

Bassi credits his success to what learned from this iconic music tutor, now 87 years old and still teaching young students.

"When James was 6, his mother (Josephine Selvaggio Bassi) brought him for lessons,'' Gullo recalled. "After a few lessons, the talent began to show. He stayed with me for the next 12 years.''

He performed at Lincoln Center when he was commissioned to put Walt Whitman’s poems to music. He won a competition grant in New York’s Foundation for the Arts.

His works also embody theater, chamber and instrumental, including two piano sonatas and vocal performances which ultimately met with the commissioned Auschwitz presentation.

He is also a rehearsal pianist with the New York Philharmonic and for Lincoln Center’s Mostly Mozart Festival.

Over a career that has stretched three decades as a versatile pianist, composer and music director, Bassi has played concerts for a variety of megastars in the industry. They include opera stars Deborah Voigt and Jessye Norman, cabaret singer Ute Lemper, and New York artists Judy Kaye and Tovah Feldshuh.

Bassi's compositions have been heard at the Lincoln Center, Carnegie Hall and other major venues. His music has been performed by such noted artists as Judy Collins and Frederica von Stade, along with the Orchestra of St. Luke’s and Voices of Ascension.

Off Broadway has brought Bassi further success. He has worked with James Lapine, who wrote the screenplay for the current hit Disney film "Into the Woods.''

He has received composition grants from NEA, Meet-the-Composer and the New York Foundation for the Arts. His music publisher is Oxford University Press.

Gullo began her piano tutoring with neighborhood children such as Bassi and eventually extended it to the entire the city and beyond. She has three children, four grandchildren and three great-grandchildren of her own.

A grandson, Patrick Gullo, has a master’s degree in composition. He is manager of marketing and public relations for an international music publishing company in New York.

"One of my highlights growing up in Haverhill was studying piano with Mary,'' Basso said. “She claims my feet barely reached the (piano) pedal when I started, and has been a constant source of inspiration and support ever since. She recognized my natural abilities and helped me refine them over the years. I remember her writing copious notes into my music suggesting further refinement of dynamics, phrasing and pedal work. My mother also studied with Mary.”

Bassi and Gullo stay connected, often meeting for lunch on the holidays and keeping updated on all Bassi’s latest developments. Gullo will often summon him to perform an impromptu mini-recital — an eclectic program which usually runs the gamut from Gershwin songs to Liszt and Beethoven.

Bassi also credits two other women who were important childhood mentors: Theater director Barbara Smart who cultivated students through the Scotland Hill Children’s Theater, and Rachel Batchelder, Haverhill High choral director, who introduced him to the world of vocal and choral music.

"I’ve never forgotten my roots in Haverhill,'' he said, "nor the important role they have served in laying out the foundation for my life as a musician.''

Dec. 13 and 14: Was musical director/pianist for "Tovah Feldshuh'' at the Nikko in San Francisco, Calif.

Jan. 27: World premiere of Bassi's oratorio titled “Five Prayers,” at the University of Minnesota, commemorating the 70th anniversary of the liberation of Auschwitz