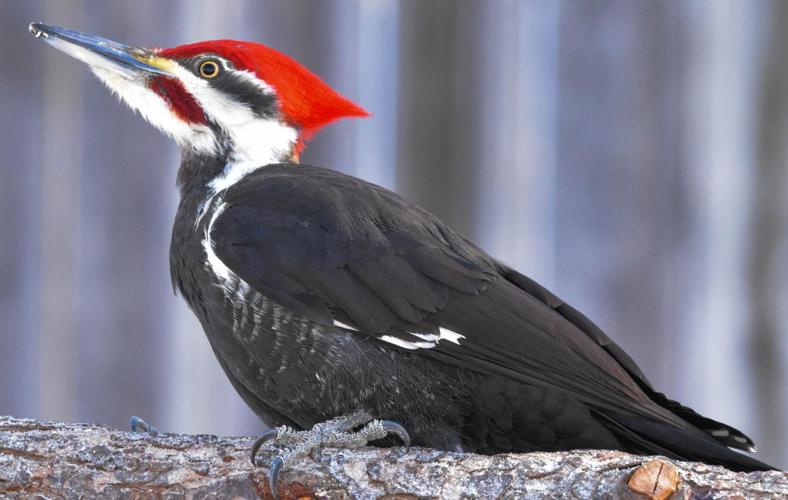 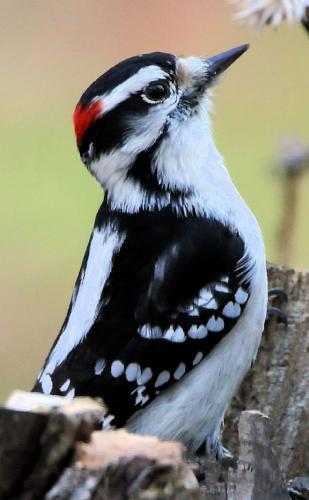 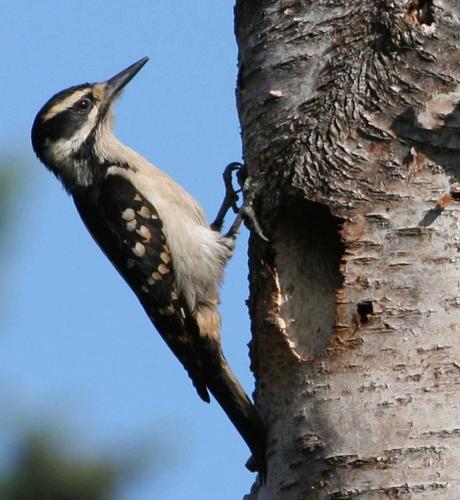 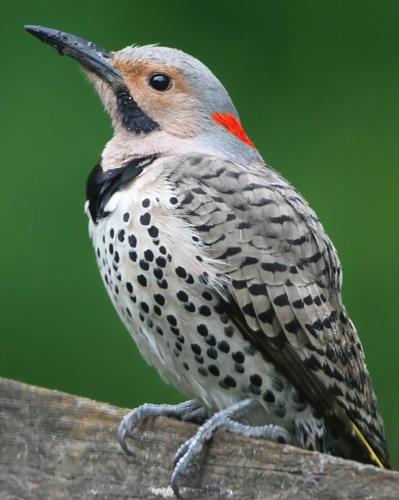 Tweetings, fellow birders and thanks for flying in today. I think it’s time we put on our detective hats and investigate a fascinating group of unique birds who seem to have a genuine knack for woodworking. No need for a hammer or nails, all they use is a sturdy bill.

Here in New England, you’ll most likely come across four types of woodpeckers. We’ll start with the smallest and probably most common species, that being the downy woodpecker. It sports a black back with a white streak (white spots along the wings as well), white belly, dark bill and tail, along with black-and-white stripes along the face and neck. The male features a red patch on the back of its head and its overall body length is only 5 to 7 inches. You’ll often see the downy moving rapidly along a tree branch, searching for insects and hammering away nosily at the trunk. They will also eat nuts, seeds and fruit, and are especially found of suet (animal fat) — and even peanut butter.

The hairy woodpecker checks in next, very similar in appearance to the downy variety. Two of the main differences you’ll find is that the bill of the hairy is much longer and larger, and the bird is often several inches taller than its downy cousin. The male’s red head patch is also usually split instead of being solid, and the outer tail feathers are more of a pure white rather than spotted. Like the downy, they nest in cavities, feasting on insects, fruits and seeds, and are generally found in deeper woodlands, although they may pop in for a visit.

Another strikingly beautiful specimen is the Northern flicker, a large woodpecker with a brown body, black bars across the back, a black spotted breast and long bill. Males feature a black stripe along the face with a red bar at the nape, while females wear a black necklace just below the throat. The tail is dark with a white rump, pronounced in flight, and the bird is very vocal, calling loudly and often. You will usually see them on the ground feeding, hunting for beetles and ants, but they enjoy fruits and wild berries as well. Flickers are excellent at controlling the population of pest animals, such as caterpillars. They are found all throughout North America, even extending as far south as the Caribbean islands.

Finally, there’s the pileated woodpecker, the largest of this group with a wingspan of nearly 3 feet. They exhibit a black body, long heavy bill, white stripes along the neck and a face ending with an impressive red sloping crest (usually shorter in juveniles). Males offer a red line along the throat, which is black in females, and the claws are strong for grasping as they move among the branches. They are exceptional drummers and will hammer their bills into a tree trunk to send out their call, either to mark territory or attract mates. The pileated dines on insects, but also nuts and fruits, including white poison ivy berries. While making homes, they excavate holes in trees large enough for other species, such as songbirds, owls or even raccoons.

I realize woodpeckers might wake you up in the morning, or perhaps drill holes in your favorite backyard tree, but please be aware of how immensely important they are when it comes to removing harmful insect species, which can ruin crops or cause disease. They are an integral part of the natural cycle, and should always be celebrated and held in high regard.

And now, the bad joke:

Q: Why are woodpeckers considered to be superstitious?

A: Because they’re always knocking on wood!

Born and raised in Methuen, Vincent Spada is the author of three books, as well as a plethora of poems and short stories. Reach him with questions or ideas for his column at vinspada@yahoo.com.