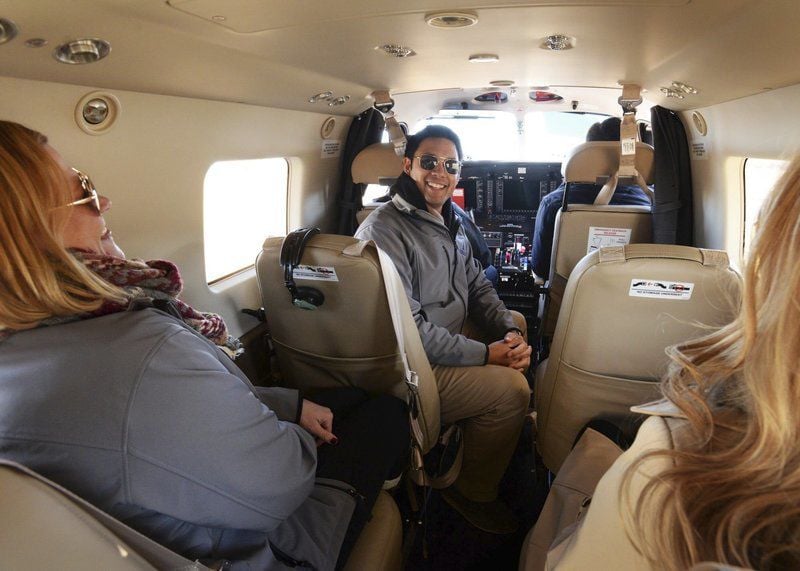 Kane Smith at Plum Island Airfield with his airplane, which he flew down from Lawrence Airport with friends and employees. The plane can seat eight passengers. 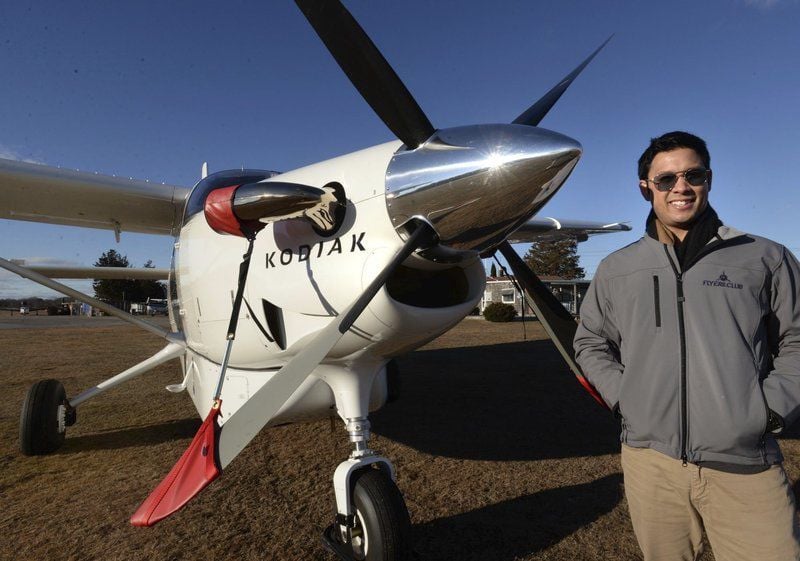 BRYAN EATON/Staff photosKane Smith at Plum Island Airfield with an airplane he will offer clients use of in a time-share arrangement.

Kane Smith at Plum Island Airfield with his airplane, which he flew down from Lawrence Airport with friends and employees. The plane can seat eight passengers.

BRYAN EATON/Staff photosKane Smith at Plum Island Airfield with an airplane he will offer clients use of in a time-share arrangement.

A Newburyport man determined to expand an air shuttle business to fill what he sees as a niche market hopes to fly customers up to 500 miles and land at airports or on water.

“If you could leave here and land on the East River in New York, it would save a lot of time by avoiding airports and traffic,” said Kane Smith, who is trying to expand his small company at Plum Island Airport from one to two planes.

Two years ago Smith launched The Flyers Club LLC for those who want to fly within a few hundred miles, including trips to Martha’s Vineyard, Bar Harbor and New York.

Members don’t have to buy the plane or fly it, but purchasing a time-share membership can save hours and offer amenities, he said.

Smith, 28, is a native of Ohio who got his pilot’s license at age 17, the youngest year the state allows. He has flown for more than a decade, and his background includes piloting numerous models of aircraft.

The young aviator came east in part to take a full-time management position at Smith & Nephew, Inc., a medical-device company in Andover. But he wanted to start a business, and he has committed himself to the Flyers Club to accommodate high-end travelers.

Those buying into his program would want to travel about once a month and would have to pay for the convenience.

A time-share on his leased Kodiak 100 costs about $180,000, and there’s a $2,000-per-month management fee and a small per-mile charge for flights. The time-share of the airplane is seen as equity and can be sold later.

Smith, a Newburyport resident, mused that a round-trip from here to New York would cost about $200 per person, based on eight passengers and two pilots, which is the maximum load.

“Regular airports are at capacity,” said Smith. “I am excited about our service, which will eventually include the capability to land on water” with a float plane.

The Daily News could not reach paying clients or people taking demonstration flights for comment.

Smith flies his leased Kodiak out of Plum Island and Lawrence airfields.

“We could use more business here,” said John Murray, who runs the flight school at the airport on Plum Island. “This is a good, small airfield and people seem to enjoy having our own facility.

“Sometimes families just come and watch the planes take off and land, but I think the local area would be OK with a few more flights.”

Smith said his big move this spring will be to acquire a second aircraft — one that can land on water.

He has several investors who apparently believe in the rebirth of smaller airports serving niche markets.

An aviation veteran who is backing the company is Paul Fayard, who runs Fayard Enterprises, of Raleigh, North Carolina.

He leased the first Kodiak to Smith, and is considering a deal to make the second craft available.

“There are already a number of small companies doing quite well in this area of aviation,” said Fayard, whose five-decade career has included buying, selling and leasing aircraft. “Large airports are having big problems with delays and security issues. A lot of time is wasted. Enabling people to use local airports at a reasonable price makes for a workable plan.”

Dyke Hendrickson can be reached at 978-961-3149 or dhendrickson@newburyportnews.com.