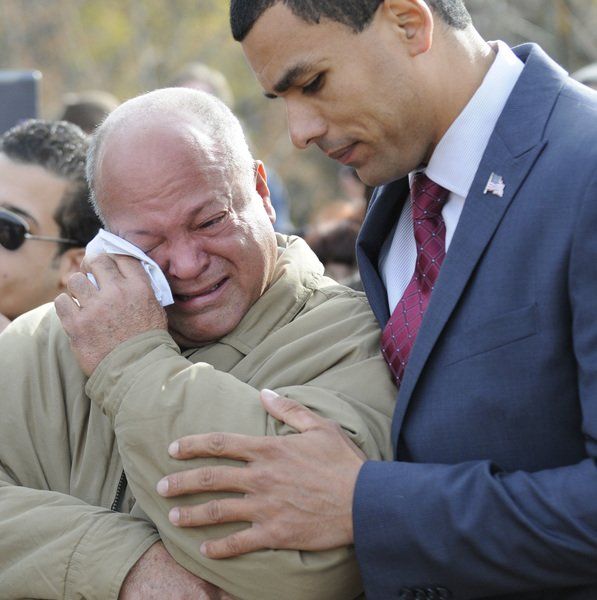 PAUL BILODEAU/Staff file photoAndy Jiminez, left, father of the late Staff Sgt. Alex Jiminez is comforted by then Lawrence veterans agent Francisco Urena during a 2013 ceremony naming a bridge after Sgt. Jiminez who was killed in Iraq in 2007. 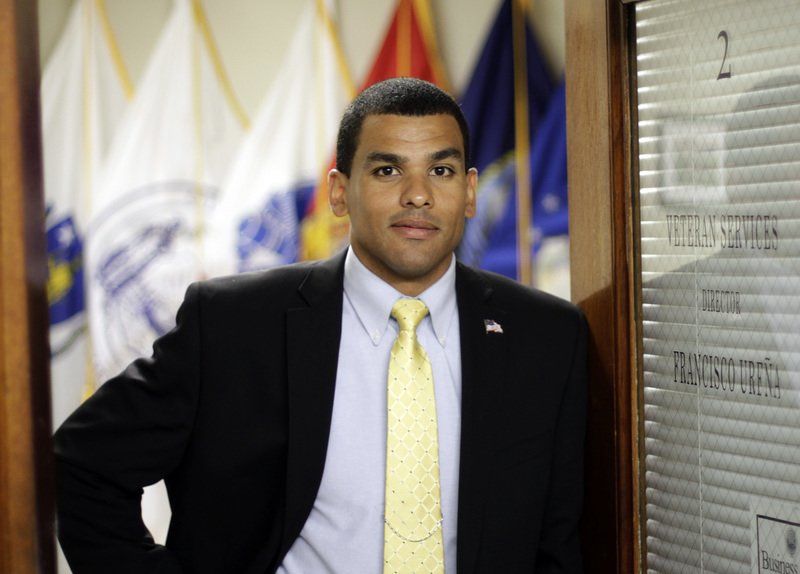 MARY SCHWALM/Staff file photo Franciso Urena stands in the doorway of his office at City Hall in Lawrence in 2011. Urena has been appointed Massachusetts Secretary of Veteran's Affairs by Gov.-elect Charlie Baker

PAUL BILODEAU/Staff file photoAndy Jiminez, left, father of the late Staff Sgt. Alex Jiminez is comforted by then Lawrence veterans agent Francisco Urena during a 2013 ceremony naming a bridge after Sgt. Jiminez who was killed in Iraq in 2007.

MARY SCHWALM/Staff file photo Franciso Urena stands in the doorway of his office at City Hall in Lawrence in 2011. Urena has been appointed Massachusetts Secretary of Veteran's Affairs by Gov.-elect Charlie Baker

LAWRENCE — As Francisco Urena assumes a role in the cabinet of incoming Gov Charlie Baker, he has the pride of the Immigrant City behind him.

"How proud are we for a Lawrence kid!" said Lawrence Mayor Daniel Rivera, after learning Urena was appointed by Baker Monday as the state's Secretary of Veterans Affairs.

Urena will oversee services for some 385,000 veterans statewide.

A Purple Heart Marine veteran, Urena, 34, served as Lawrence Veteran's Director and most recently Commissioner of Veteran's Services in Boston.

"He exemplifies what every Lawrence kid can grow up to be ... It's a Lawrence success story. The Commonwealth is getting a great secretary," said Rivera, an Army Desert Storm veteran.

Abdoo detailed Urena's roots as a Boy Scout earning Eagle Scout rank, who then joined the Marines and later came home to Lawrence to work with fellow veterans.

"His attention to detail was amazing in a city where details are often lost. Francisco's paramount concern was, as has always been serving the needs of people. Each and every one of them, regardless of their need and station in life," said Abdoo, an Army National Guard veteran.

Urena described his appointment as "bittersweet," explaining he's assembled a great team in the Boston veteran's office during the past three years.

"We are engaging veterans in all of the neighborhoods," Urena said.

But, Urena said he will take that approach to a larger audience - encouraging outreach to veterans statewide. You can't rely on all veterans to come by an office and look for help and services. You have to go to them, Urena explained.

Urena moved from the Dominican Republic to Lawrence at age 4, the son of a single mother. He attended the Tarbox School before moving to Florida. In 1998, the day after he graduated from Broward High School, he joined the Marines.

He spent eight years in the service, guarding U.S. embassies in Syria and Kyrgyzstan and was a tank commander during Operation Iraqi Freedom.

During a clash with insurgents in the Anbar Province, Urena was struck in the face with flying glass and debris. He still has a piece of scrap metal in his cheek. In 2005, he awarded the Purple Heart, a decoration for military members who are wounded in action.

Former Lawrence Mayor Michael Sullivan first met Urena during the Mother's Day floods of 2006. Sullivan was holding a press conference about flood damage and Urena showed up with a video camera and started asking him questions. Urena, at the time, was volunteering with local access television.

"He was a veteran who had come back to Lawrence and was looking to volunteer his time," Sullivan said.

In 2007, when the city veteran director's job opened, Sullivan encouraged Urena to come aboard. It was a successful move, he said.

"I think it's really his personality," said Sullivan, when asked what's won Urena such respect and praise. "There's no one thing about him. He's respectful to everyone, he listens and he's very caring," he said.

"He realized he was just one part of the city. They respected him. I don't think you can teach things like that. He's just a good kid. And it's brought him to where he is today," Sullivan said.

Starting in May 2007, Urena was instrumental in assisting the family of Staff Sgt. Alex Jimenez of Lawrence who was captured, tortured and murdered by insurgents in Iraq. Jimenez's body was recovered 14 months later.

"Thank you is not enough for what Francisco did for me and my family during our ordeal," said Andy Jimenez, Alex's father, in a 2011 Eagle-Tribune interview.

"He went above and beyond his duties," Jimenez said.

In 2008, Urena was named Veterans Services Director of the Year in part for his work with the Jimenez family.

When Urena was hired in Boston in 2011, the late Mayor Thomas Menino cited Urena's service in Operation Iraqi Freedom and helping veterans in Lawrence. Menino described him as "uniquely suited to lead this department."

Urena has undergraduate and graduate degrees from the University of Massachusetts at Lowell and Boston and an associate's degree from Northern Essex Community College.

Abdoo said he has no doubt Urena will "hit the ground running" in his new state role.

But above all, Urena is a mentor and great role model for the city of Lawrence, Abdoo said.

"He really is emblematic for what any Lawrence citizen can accomplish. From Lawrence to Boston to the statehouse. All the while bettering himself along the way," Abdoo said.

BOSTON — Charlie Baker was sworn into office as Massachusetts' 72nd governor on Thursday, pledging to reach across party lines as the chief ex…