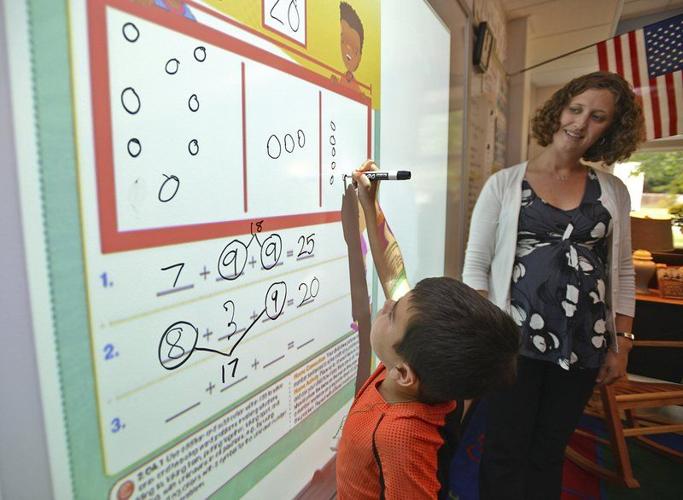 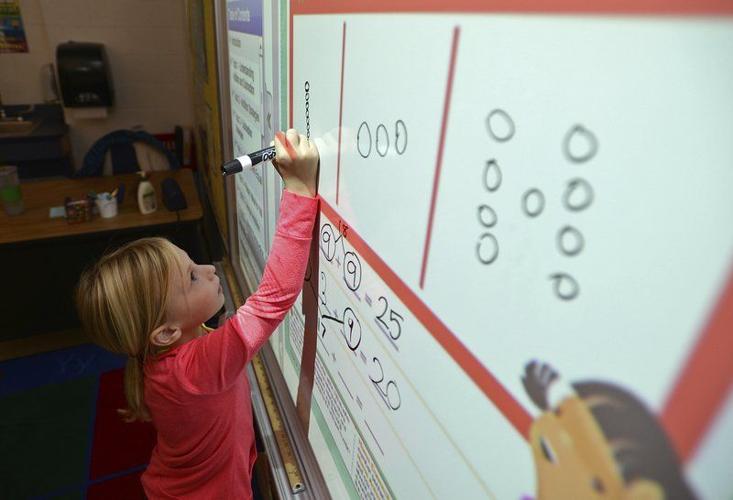 RYAN HUTTON/Staff photoFisk School second-grader Brady Chane, 7, does a math lesson using one of the school's new interactive projectors on the classroom whiteboard. 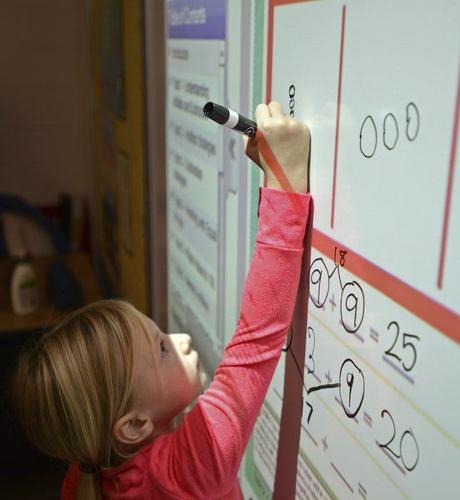 RYAN HUTTON/Staff photoFisk School second-grader Brady Chane, 7, does a math lesson using one of the school's new interactive projectors on the classroom whiteboard.

SALEM — It's not your parents' blackboard or even your children's whiteboard.

It's the BrightLink 595 Wi by Epson — the latest educational technology installed in Salem elementary school classrooms.

There's no need for chalk or markers, students can write in a multitude of colors using their fingers.

If there's a misspelled word or incorrect answer to a math problem, it's fixed almost instantly. The particular computer program that's being used gives a correct explanation.

Thanks to a special projector and other equipment installed in classrooms at the district's elementary schools this summer, the state-of-the-art technology is improving how children learn, Superintendent Michael Delahanty said.

It makes school more interactive and just plain fun, keeping students engaged in learning, he said. The district was told it's the first in New England to use the technology, he said.

"It's almost magical," he said. "There is a great deal of excitement."

The veteran school superintendent isn't the only one who feels that way.

The district's teachers and administrators are pleased as well, including Fisk principal George Murray.

"They are very interactive, it's like touching an iPad," he said. "They are used in every classroom, every day. It really has changed how we teach."

The days of chalk and blackboards ended about eight years ago, Delahanty said.

They were replaced by whiteboards and markers.

A limited number of interactive whiteboards were introduced at Woodbury School and Salem High School because the district wasn't confident it was worth the investment, Delahanty said.

Compared to the new projectors, the advantages of interactive whiteboards are limited. They are also subject to a lot of wear and tear, he said. Teachers and students must use a stylus.

When the district was completing more than a year of renovations at Fisk and Soule schools this summer, officials decided it was worth the investment to provide the interactive systems.

They were also purchased for Barron, Lancaster and North Salem schools, which were renovated a few years ago. The systems will be installed at Haigh School in the next three weeks. More may be purchased for Woodbury and the high school at some point, Delahanty said.

The district expended $227,736 from its technology budget to include the interactive systems in 89 classrooms, according to information technology director David Hasbany. That's a cost of $2,558 per classroom, Hasbany said.

The money spent was well worth it, he said.

"We thought it was important for student engagement," he said. "The students naturally took to it right away."

Teachers, using a laptop, can write on the board without leaving their seat, Hasbany said.

"It's made such a difference," she said. "I feel the kids are so much more involved in learning. The kids love it."

Teachers can now stand in front of the board, without worrying about creating a shadow that prevents students from seeing the board, Murray said. Students can also use websites on the board as well.

While that may be important in learning the day's lesson, the main objective is teaching in a more efficient and effective manner that keeps students interested, Hasbany said.

It also helps young students such as Tyler and his second-grade classmate, Sophia Kelly, learn to embrace a world of ever-changing technology.

They both love the interactive systems, especially being able to use their hands.

"We use it a lot," Sophia said. "I like to draw on the boards — it's like fingerpainting."