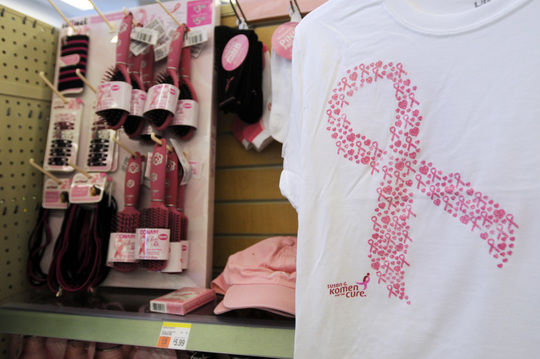 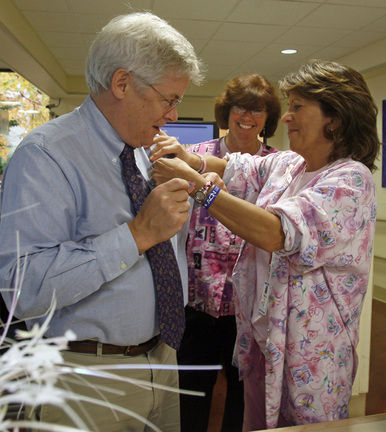 NORTH ANDOVER — Located at the end of a low aisle in the cosmetics department of Walgreens, a couple shelves of pink-hued products, surrounded by a few hanging pink T-shirts, tout the pharmacy chain's efforts to promote breast cancer awareness.

The display, barely noticeable amid the store's thousands of other items for sale and the blaring Halloween aisle a few rows away, is one piece of a multimillion dollar marketing campaign that has drawn backing from nearly every corner of modern American society — from the NFL and Barbie dolls to toothbrushes and toilet paper.

The movement is all part of an effort to bring awareness to the scourge of breast cancer, the second leading cause of fatal cancer in women. For businesses, it has become a wildly popular part of their "cause marketing" budgets, relying on traditional and new media to spread the word about their support of a charity and the products they sell.

But to a growing chorus of detractors, the campaign is nothing more than a crass ploy by big corporations to link up with a charity to increase profits — a practice labeled by one group as "pink-washing." Some fear the movement has taken attention and research money away from other, more deadly forms of cancer, such as prostate and lung disease.

"The pink stuff is just awful," said Hester Hill, manager of the oncology social work group at Beth Israel Deaconess Medical Center in Boston. "Pink ribbons on toilet paper? How is that helpful? For every roll of toilet paper they donate a penny? Really? Where is it going?"

Hill, who runs support groups for people dealing with all types of cancer, said some current and former victims of breast cancer have told her they don't like to leave the house during the month of October.

"They can't go to the store or open the newspaper," she said, because they are bombarded with pink displays and advertisements about Breast Cancer Awareness month. "And for non-breast cancer patients, they say they feel uncared about, angry, hurt and worried that no research is being done on their kind of cancer."

But supporters of the seemingly ubiquitous advertising, public relations and marketing campaign say a rising tide lifts all boats — that what's good for breast cancer awareness is good for all kinds of cancer, not to mention being good for business.

"This month is terrific," said Nick Zaharias, vice president for philanthropy and marketing at Lawrence General Hospital. "We have seven major events. We had a breakfast at the Lawrence Senior Center with 200 guests and a fashion show with 400 guests, and our messaging around these events is all about the importance of breast cancer awareness."

He said the result is that the average number of mammograms at the hospital's cancer-screening unit increases from 650 a month to 850 or 900.

"We have a free breast clinic going on right now, and it's packed," Zaharias said, "Every October we have an uptick."

At Methuen's Holy Family Hospital, a cadre of women known as the Pink Ladies greet patients and hospital visitors in the lobby of the hospital throughout the month of October, answering questions and raising awareness about breast cancer.

A number of events are also being planned to raise awareness about the issue, according to Joanne Voigt, director of Holy Family's Breast Cancer Care Center, who noted that it's important to jump-start a dialogue among women, whether that push comes from television, newspapers or radio ads.

"It's very beneficial," she said of the awareness campaign. "We are seeing results from these efforts. Women are talking with other women, their friends, co-workers, family members, mothers, daughters and sisters. That this is an important element to their health care."

While it's good for hospitals and some patients, the movement is also good for business.

New Balance, a Boston-based athletic apparel company with a shoe manufacturing plant in Lawrence, has been a longtime partner with the Susan B. Komen foundation, one of the original breast cancer fundraising groups that uses pink ribbons and other pink products to raise money and awareness about breast cancer.

"The issue of breast cancer and our partnership with Susan G. Komen for the Cure is our first and longest-standing cause marketing initiative, dating back to 1989," said Jennifer Hamel Keddy, head of cause marketing at New Balance. "We take great pride in our association with Komen, as the originator of the breast cancer movement, and stand beside them in our commitment to finding a cure for this devastating disease."

She went on to say that cause marketing is "an integral part of who we are as a company, of how we identify ourselves as associates and of how we position ourselves to our customers and consumers."

She wouldn't say how much money the company has made as a result of its association with the Susan Komen group, but said that "through sales of the Lace Up collection alone, we have donated more than $8 million to Susan G. Komen for the Cure over the past decade."

Other athletic organizations have also joined the fight for breast cancer awareness.

Last Monday night's NFL football game was a blur of pink — cleats, patches, arm bands, mouth guards — as players from both the New York Jets and Miami Dolphins jumped into the cause. The display was encouraged by the owners of the NFL, who have decided to have all of their teams wear some form of pink all month.

Linking up with a good cause is just good business, said Joseph Stasio, a Merrimack College associate professor in marketing.

"Because it (breast cancer movement) is so popular, everyone wants to link to it," he said. "Cause marketing creates awareness, that you are doing good and which helps you in the process."

"The NFL is trying to develop a new market," he said. "They are trying to get more women to watch their games. Here's an opportunity for the NFL to get involved in a cause, create awareness, promote it, and attract women to their brand and the NFL.

"It's good business. There's usually a quid pro quo, and it's usually a win for everybody. I don't think there's an ethical dimension to it. It's fine. It's the way to do business."

Not everyone agrees with that statement, however.

The group's "Think Before You Pink" website lists some of the more egregious uses of the pink label by companies that sell products that are notoriously unhealthy and have been linked to cancer-causing chemicals.

In 2008, the group made national headlines when it took on General Mills, which owns the Yoplait yogurt brand, for its "Lids Save Lives" campaign. Consumers of Yoplait can save the pink, metal tops of yogurt containers and send them to Yoplait, which makes a 10 cent donation to the Susan G. Komen group.

But it turns out Yoplait at the time used an ingredient that was linked to breast cancer, a chemical called rBGH, a genetically engineered hormone injected into dairy cows. Shortly after Breast Cancer Action started its campaign, General Mills announced it would stop using milk from cows treated with rBGH in its Yoplait yogurt.

"We confronted General Mills and they stopped using rBGH in their yogurt," said Kimberly Irish, program manager for Breast Cancer Action. "Then Dannon yogurt did the same. Now much of the yogurt market is rBGH-free."

Breast Cancer Action also attacked Kentucky Fried Chicken and the Susan Komen group when it announced its dubious partnership, "Buckets for a Cure." The group's "What the Cluck" campaign mocked the campaign as "pink-washing" at its worst, because it encouraged people to eat unhealthy food. A poor diet is customarily listed as one of the leading causes of all kinds of cancer.

"What most concerns us are companies we consider 'pink-washers' — corporations who say they care about breast cancer, or donate a certain portion of their profits to breast cancer research, but also make products that contribute to an increased chance of breast cancer," Irish said.