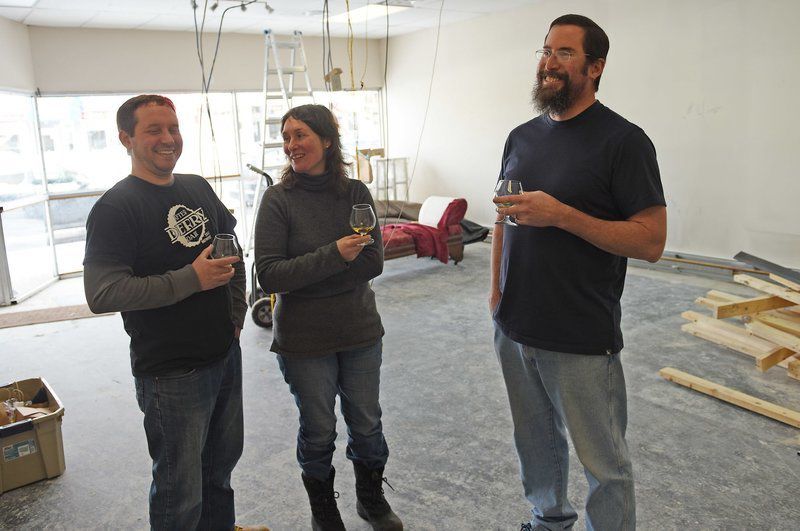 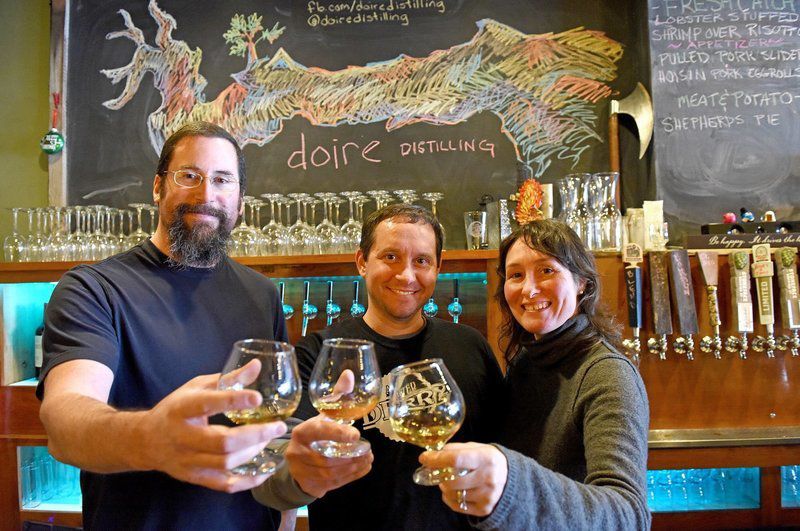 TIM JEAN/Staff photoToasting to a new business venture called Doire Distilling are, from left, Bill Herlicka, Andy Day and Alana Wentworth. The new distillery will be next door to Cask and Vine in downtown Derry.

TIM JEAN/Staff photoToasting to a new business venture called Doire Distilling are, from left, Bill Herlicka, Andy Day and Alana Wentworth. The new distillery will be next door to Cask and Vine in downtown Derry.

DERRY — It's a spot where people gather to share a meal, try wine and taste some of the area's most unique craft beer offerings.

It's also a beacon to what's good about downtown Derry and its business community. And there's room to grow — right next door.

Doire will take shape in vacant commercial space right next door to Cask and Vine at 1 1/2 East Broadway. Work is now underway including renovations, bringing in the distilling equipment and making way to start creating a whole new product that the downtown hasn't seen before.

"We are anxious to get started," Day said, adding having the distillery right next door to Cask and Vine will make a complete package as to what he hopes customers will enjoy.

The word Doire (pronounced dwar-ay) is derived from a centuries-old Irish word meaning "oak grove" or "oak wood." The name is a tribute to Derry and its early settlers.

Joining with Day and Wentworth is business partner Bill Herlicka, known for his 20 years of brewing and distilling experience and founder of White Birch Brewing in Hooksett. Herlicka said he is ready to offer insight and knowledge to help bring Doire to life.

"We became good friends over the years," Day said of his relationship with Herlicka. "This is the next thing."

As Cask and Vine celebrates five years in 2018, Day said bringing Doire to Derry can only complement what the downtown already has to offer. He points to a big feeling of energy, and pride that, as a downtown business owner, he wants to keep that energy going.

Saying the word "doire" also sounds a bit similar to pronouncing the word "Derry," a place Day noted, that means a lot to both he and Wentworth and what they hope to accomplish as both business and life partners.

As Derry readies to celebrate the 300th anniversary of the original Nutfield settlement in 2019, opening a new business can support the town and bring awareness to what the community has to offer moving into the future, while honoring its rich past and traditions.

Herlicka said he has been making beer since 1994 and felt the distilling opportunity in Derry would help perfect many ideas he has collected through the years.

Doire will be a smaller operation, Herlicka said, and that only adds to its charm as a homegrown downtown business.

"And in a town with a lot of character and history, to draw on that, that's what makes it fun," he said.

Bringing those tasting "journeys" to customers is also part of the fun of being in the business, Herlicka said.

Herlicka also wants to bring those stories about brewing and distilling to those tasting the product, whether there are specific herbs added to a batch of gin or vodka that have a strong history in New Hampshire's foraging environment, or other tastes and spices making a good bourbon or whiskey. It's all about being creative and appreciating the process and forming potential partnerships with those experts who may offer insight on specific tastes.

Day said customers will be able to taste Doire's products at Cask and Vine.

"If you want to come in and drink whiskey, it will be here at Cask and Vine," he said.

Day said downtown Derry has a lot to be proud of. He and Wentworth support all things Broadway and beyond, organizing "This is My Derry" movie nights and special events throughout the year, and also bringing the town's first "Derry After Dark" event to the downtown last September, putting area craft breweries, restaurants and other businesses in the spotlight for a Broadway block party.

"There's more and more growth and a lot of positive things going on," Day said. "There's a lot of pride existing in Derry that we didn't hear about before."

For Wentworth, it's all about working together, spreading the good work and pride of being a business owner while offering great products and service.

"It's bringing back community, bringing it together," Wentworth said.

Day said Cask and Vine will be offering hours of operation seven days a week with a new brunch menu on Saturday and Sunday.

He is looking forward to bringing Doire to the downtown, hopefully opening this spring once the town approval process is complete. There are also several opportunities to support Doire by visiting doiredistilling.com.

"It's one more reason for people to come to Derry," Day said.