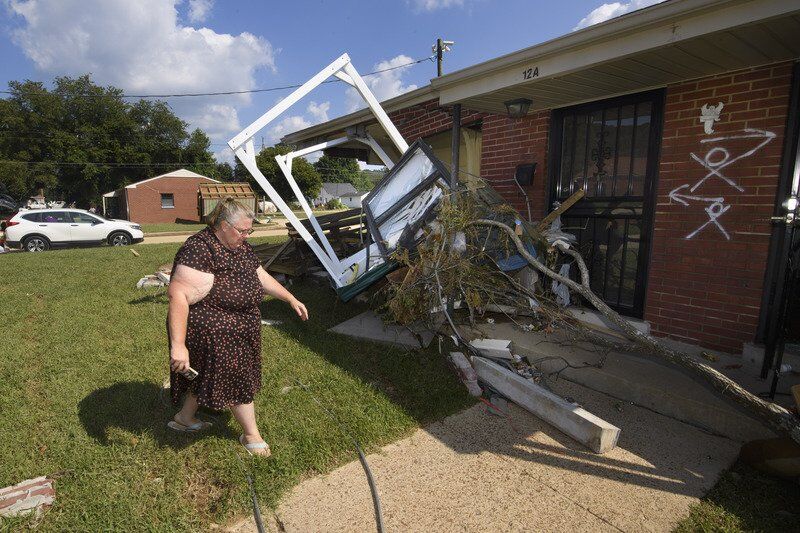 Annie Rushing walks up to her home after it flooded and forced her into a shelter, Monday, Aug. 23, 2021, in Waverly, Tenn. Heavy rains caused flooding in Middle Tennessee days ago and have resulted in multiple deaths, and missing people as homes and rural roads were also washed away. (AP Photo/John Amis) 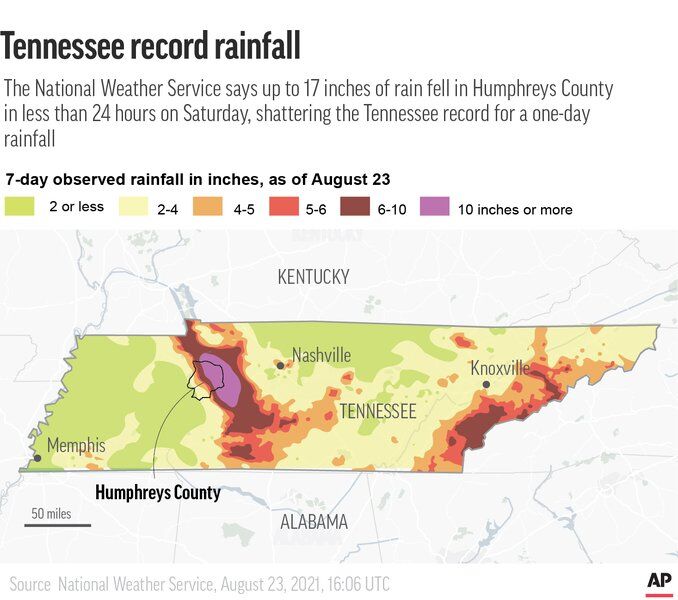 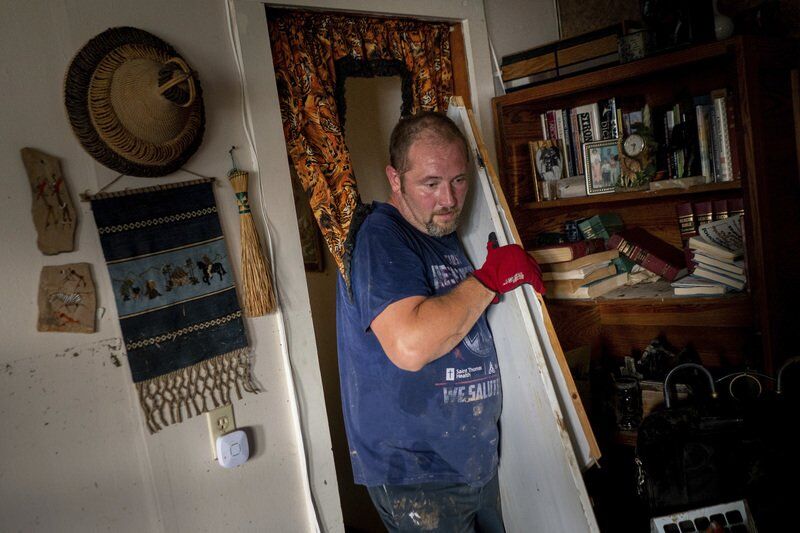 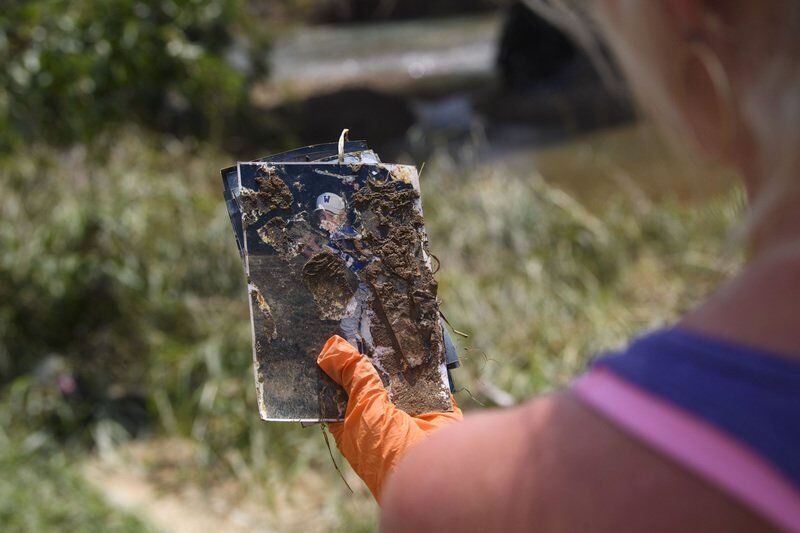 A woman holds a photo she found as she searches for personal items lost in recent flooding, Monday, Aug. 23, 2021, in Waverly, Tenn. Although she did not recognize the person in the photo she planned on posting it on social media to reconnect it with the owner. (AP Photo/John Amis)

Annie Rushing walks up to her home after it flooded and forced her into a shelter, Monday, Aug. 23, 2021, in Waverly, Tenn. Heavy rains caused flooding in Middle Tennessee days ago and have resulted in multiple deaths, and missing people as homes and rural roads were also washed away. (AP Photo/John Amis)

A woman holds a photo she found as she searches for personal items lost in recent flooding, Monday, Aug. 23, 2021, in Waverly, Tenn. Although she did not recognize the person in the photo she planned on posting it on social media to reconnect it with the owner. (AP Photo/John Amis)

Even cars and sheds were woven into the tangle of debris lining Trace Creek in Humphreys County, where the town of Waverly saw the most death and destruction from Saturday’s flooding that killed 18 people. Three people remained unaccounted for Tuesday.

At one bridge, an excavator crawled into the creek to dig through a debris plug that included large trees, huge spools of cable, panels of wooden fencing and chunks of concrete. Officers watched from above and downstream in case a body was uncovered.

Other crews were working with chainsaws along the banks, clearing smaller objects. Several miles downstream, officers had deployed drones to help with the search. It’s difficult to know how far the bodies might have been carried, but one car was found about a half-mile from where it had been parked, Humphreys County Chief Deputy Rob Edwards said.

Sheriff’s deputies and police were aided by crews from agencies all over the state, he said. The teams have cadaver dogs at the ready if they suspect a body might be nearby. With the heat in the mid-80s and rising, it was not difficult to detect the odor of decay, Edwards said, although crews also were finding animals.

As the search for the missing continues, officials have started to comprehend the scope of devastation in the community. The Humphreys County Emergency Management Agency said in a news release that more than 270 homes had been destroyed and 160 have major damage.

“Some are just gone — off the foundation — twisted, turned," Humphreys County Sheriff Chris Davis said at the news conference. "They would probably have to be totally destroyed before they could be built back.”

“The sheer devastation that we saw in that helicopter ride yesterday has made me realize that we have got an extremely long road to go in all of this,” he said.

Authorities revised the confirmed death toll to 18 people Tuesday, a drop from as high as 22. Waverly police Chief Grant Gillespie said that one person in the emergency room who died of natural causes was mistakenly added to the count and John and Jane Doe victims were not crossed off the list once they were identified.

Gillespie said authorities had detectives follow up on each case and confirm the numbers, which now line up with the state tally.

“Just an honest mistake, and I hope everybody understands that,” Gillespie said. “It’s still a tremendous loss of life. I hope that number doesn’t grow.”

Three people are still on the list of those missing who witnesses said they saw in the water, he said.

The flooding took out roads, cellphone towers and telephone lines in the county of about 18,000 people, leaving some uncertain about whether family and friends survived the unprecedented deluge, with rainfall that more than tripled forecasts and shattered the state's one-day record.

It also left large swaths of the community about 60 miles west of Nashville suddenly displaced, leaving many to sort through difficult decisions about what comes next. GoFundMe pages sought help for funeral expenses for the dead, including 7-month-old twins swept from their father’s arms as they tried to escape.

Matthew Rigney and Danielle Hall described to WTVF-TV how the water began to rage through their apartment as he held onto their twins and two other young children.

“The water, when it hit us it just pulled us under, all of us and we were trapped underneath a bed,” Rigney told the station, his voice trembling behind tears.

The other two children survived.

“I was trying to find all of them, and Leah came up like a big girl. You swam like a big girl, and I’m so proud of you,” Rigney said to 5-year-old Maleah, who sat with her family during the interview.

A neighbor helped Rigney and the two children up to the roof. Hall was ultimately rescued from a tree by boat.

School was canceled for the week, according to the sheriff’s office. Waverly Elementary and Waverly Junior High had extensive damage, according to Kristi Brown, coordinated health and safety supervisor with Humphreys County Schools.

About 750 customers were without power Tuesday, down from 2,000 the night before, utility officials said.

Meanwhile, the state received approval from President Joe Biden for a major disaster declaration, which frees up federal aid to help with recovery efforts in Humphreys County, the White House said in a statement Tuesday.

Sheriff Davis told reporters Tuesday, “You've seen us get a little emotional. You have to remember, these are people we know, people's families, people we grew up with — just the people of our small town. It's just very close to us.”