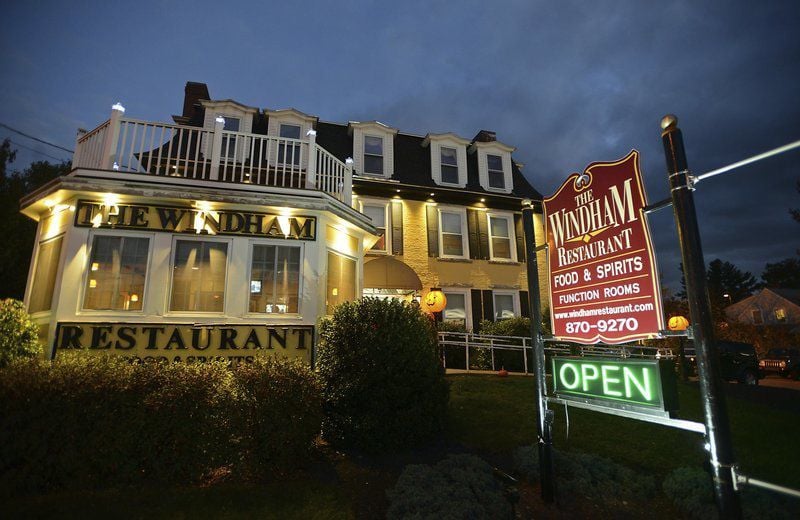 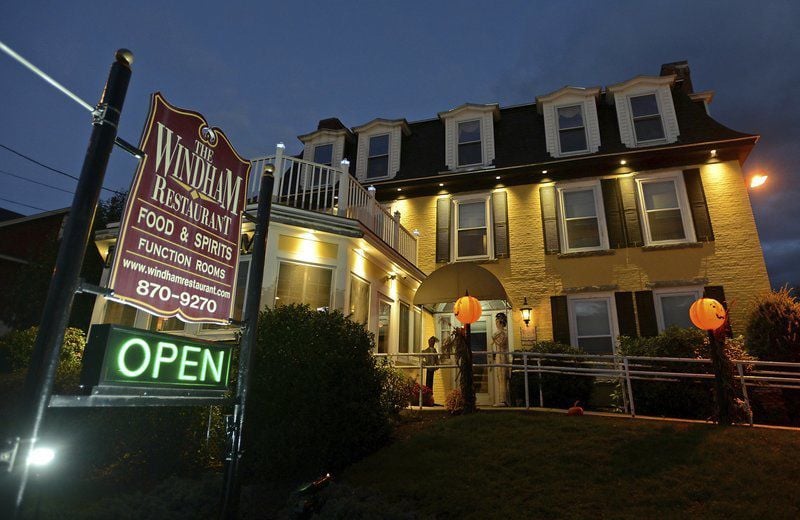 RYAN HUTTON/ Staff photoThe Windham Restaurant is perfectly decorated for Halloween with lighted plastic pumpkins. The popular establishment is believed to be haunted.

RYAN HUTTON/ Staff photoThe Windham Restaurant is perfectly decorated for Halloween with lighted pumpkins. The popular establishment is believed to be haunted. 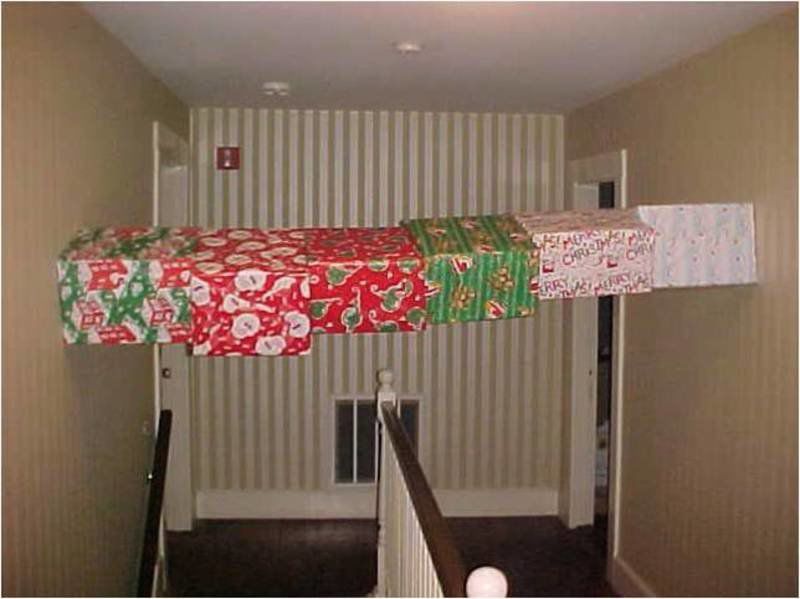 COURTESY/N.E. GHOST PROJECTHalloween may be known for ghosts, but spirits are believed to be active any time of year, including the holiday season. This is what restaurant employees discovered when they went to work one day nearly 20 years ago. 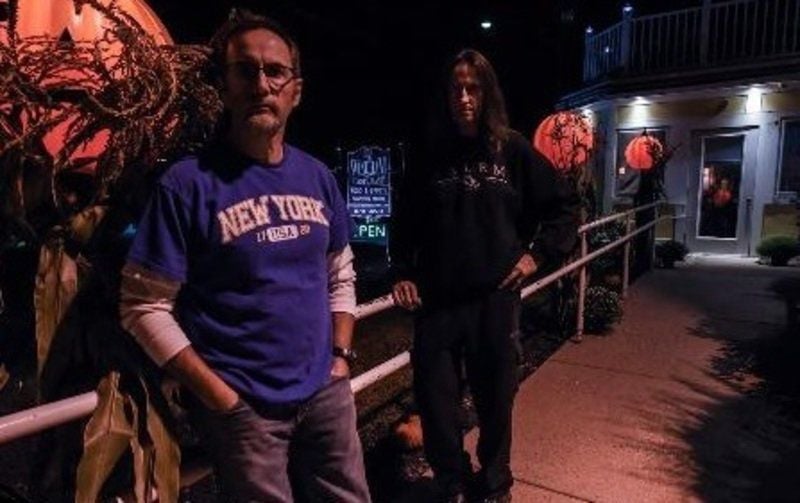 COURTESY PHOTOThe Windham Restaurant is a haven for ghost hunters such as Rich Damboise, left, and former professional wrestler Jerry "The Candyman" Seavey of Adventure Cam Paranormal. They recently investigated the establishment.

RYAN HUTTON/ Staff photoThe Windham Restaurant is perfectly decorated for Halloween with lighted plastic pumpkins. The popular establishment is believed to be haunted.

RYAN HUTTON/ Staff photoThe Windham Restaurant is perfectly decorated for Halloween with lighted pumpkins. The popular establishment is believed to be haunted.

COURTESY/N.E. GHOST PROJECTHalloween may be known for ghosts, but spirits are believed to be active any time of year, including the holiday season. This is what restaurant employees discovered when they went to work one day nearly 20 years ago.

COURTESY PHOTOThe Windham Restaurant is a haven for ghost hunters such as Rich Damboise, left, and former professional wrestler Jerry "The Candyman" Seavey of Adventure Cam Paranormal. They recently investigated the establishment.

WINDHAM — If you're not one to dine alone, head over to The Windham Restaurant.

Chances are you won't be alone as you sit down to enjoy the rack of lamb, Windham chicken or any other one of owner and chef Vess Liakas' specialties.

That's because the restaurant is believed to be haunted. Some will tell you there's no question it's haunted.

Things suddenly fall off shelves, there are strange noises and voices, lights go on and off, objects appear to move on their own, and customers and employees say they see apparitions.

"There are a lot of strange things that happen here," said Liakas, a Dracut resident who opened the Range Road restaurant with his aunt, Lula Liakas, in September 2001.

"It's more mischievousness than anything," he said.

It is no coincidence there is a sign over the front entrance that reads "Food & Spirits."

Before the Liakases opened their business, the 204-year-old former farmhouse was the home to other restaurants.

They included The Riviera, where Liakas said he later learned there had been many strange occurrences. Several families, such as the Dinsmores, lived there from when it was built on an old home site in 1812 until it was last occupied in the 1980s, he said.

During the holidays, employees of The Riviera would come to work and find boxes, wrapped like Christmas gifts, suspended in midair between the walls of the third-floor stairway.

"I heard the stories after I bought it," Liakas said. "They said, 'This place is haunted.' Then, things started happening to me."

Dishes would repeatedly fall and break, people would hear voices, and customers and employees would say they saw an old man in a blue suit, a young boy and a girl.

Female guests and waitresses would report being touched, often saying their jewelry suddenly fell off.

"They feel like someone is touching their hair ... I've heard from customers that their necklaces will fall off or an earring will fall off," he said. "People will call me over and say, 'My glass just moved across the table."'

Liakas, 56, said he never used to believe in ghosts and is still skeptical, but there have been too many unusual occurrences.

"Things fall without any explanation," Lyons said, showing how dishes and plastic containers suddenly plummet to the floor without being touched. "It doesn't make any sense."

Only seconds after she spoke, the tops to several large plastic containers, which appeared to be jammed in place, fell several inches forward even though they had not been touched.

Earlier in the evening, the same plastic tops came crashing to the floor, falling about eight feet and landing only inches from Beliveau. The night before, the tops had also fallen without being touched, Lyons said.

Lyons, 47, said the most unusual thing she has seen at the restaurant was a recliner spin on its own in the basement. It's said to be the most haunted area of the restaurant along with the second floor, where there are two dining rooms.

"I will never go in the basement by myself again," Beliveau said.

Beliveau, an employee for 14 years, said she's seen apparitions of the old man, young boy and the girl, along with others, and heard voices.

"A lot of things have freaked me out," she said. "One time, I looked and saw three men, all dressed up, sitting at a table in the dining room. Then, I looked again, and no one was there."

Another time, she was in the kitchen and suddenly heard a gruff voice, but no one was present.

But Liakas said the spirits that are believed to inhabit the building are friendly and more interested in causing mischief than scaring anyone. Customers continue to flock to the restaurant, not worried about encountering spirits.

"The service is excellent and the food is good," said Sheila Hand of Salem, a regular.

One night, Liakas' brother, Nick, said he was tending bar when four customers suddenly asked in unison, "'Nick, did you see that?' They all swore they saw someone walking in the upstairs hallway."

Even before the Liakases purchased the building, it was a popular place for paranormal investigators.

At least a half dozen ghost-hunting groups have visited the restaurant late at night, complete with sophisticated electronic equipment, with the hope of recording and photographing spiritual activity, Liakas said.

"We've had all kinds of people come here," he said. "Most of the stories match up."

Each tries to communicate with the old man, who is believed to be named Jacob and apparently died after suffering a heart attack and falling down the stairs.

They also tried to speak with the young boy, believed to be named William. It's said he was struck by a horse-drawn carriage and carried inside the building, where he later died.

There is also believed to be a teenage girl who haunts the restaurant. She lived in the home when killed in a car accident down the street on the night of a school dance back in the early 1980s, Liakas said.

Liakas said he regularly receives requests from paranormal groups that want to investigate the building.

One group that recently explored the restaurant was Adventure Cam Paranormal.

"We've heard it was haunted, so we just wanted to check it out," Seavey said. "I heard so many people talk about it."

They weren't disappointed — there were plenty of strange noises and unexplained activities that night.

"The staff of The Windham Restaurant had some great stories of their experiences with the spirits there and we were able to confirm a few of them," Damboise said.

The two men had a few hair-raising experiences of their own that night when Seavey felt something touching his long hair and Damboise also noticed something unusual.

"I felt someone blow on the back of my neck," he said. "I quickly turned around and no one was there. It wasn't like a breeze or a fan, it was a very close, concentrated breath."

Others who have investigated the restaurant include The New England Ghost Project, a group founded in 1998 by Ron Kolek of Dracut. The group often offers popular "Dining with the Dead" events at the restaurant.

Kolek serves as the lead investigator and has co-written books on paranormal activity with fellow group member Maureen Wood — one of six generations of psychic mediums in her family.

The two have participated in more than 100 investigations and wrote about their numerous visits to the Windham establishment in their book "The Ghost Chronicles."

Although it's been several years since the group last visited, "People still contact me about things that happen there," Kolek said.

When The New England Ghost Project conducted an investigation at the restaurant while it was still known as The Riviera, blond waitresses said they thought they were being targeted by a spirit who liked to touch their hair.

There were the incidents involving the Christmas boxes, and then the key to the second floor was found stuck in a window frame.

Liakas spoke of two particular incidents he said he would never forget. Kolek and Wood were there as well along with a film crew and newspaper reporter.

When they stepped inside a small kitchen on the second floor, the video camera suddenly shut off and a coffee maker turned on, they said.

"It literally turned on and coffee started pouring out," Wood said. "Everyone jumped up in the air."

But the incident that particularly spooked the restaurant owner occurred when he watched Wood and fellow investigators check out the dark, eerie basement.

As a medium, Wood said she can communicate with the spirits of the deceased and "transchannel" their messages to the living.

Wood spoke of communicating with Jacob, who apparently didn't want strangers investigating in the basement, which once had a dirt floor.

As Wood spoke, she appeared to be in a trance and suddenly started speaking loudly and sternly — as if she really were him, Liakas said.

"She had a man's voice — I was freaked out. I never felt so threatened in my life," Liakas said of the menacing voice. "She said to me, 'What are you looking at? I have papers buried here.'"

Wood just stood there in a trance, he said, until a member of the group grabbed the medium. She didn't remember anything.

"There are a lot of things we witnessed there," Wood said. "There is a lot of activity there. ... Sometimes, they just don't want to leave."