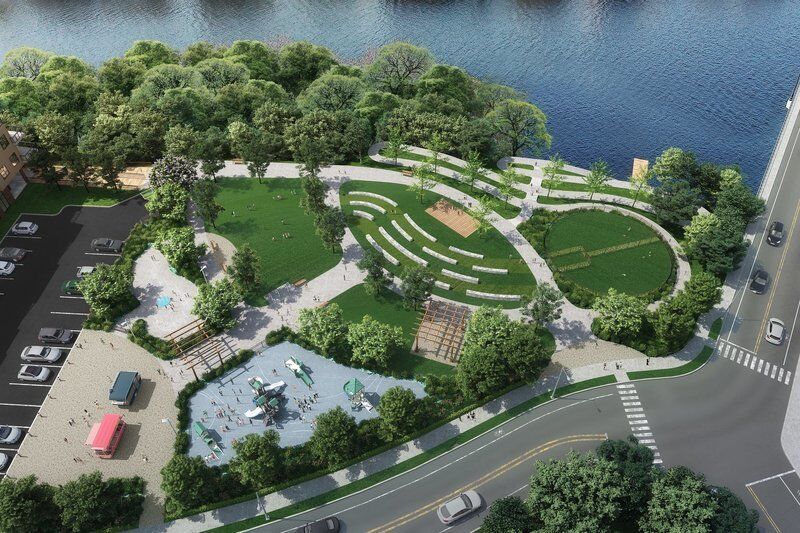 Courtesy imageThe project, when viewed from above in this artist's rendering, shows a public park and amphitheater closest to the river. 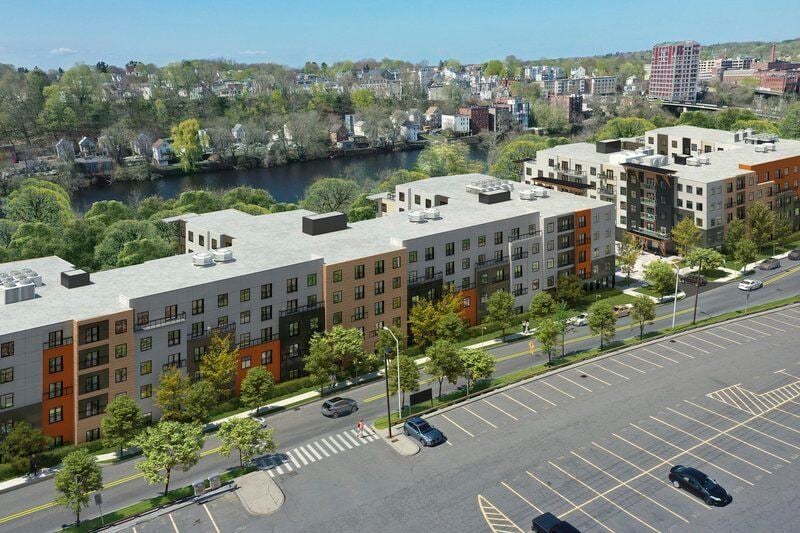 Courtesy imageAn artist's rendering of the project shows the Merrimack River and downtown Haverhill in the background. 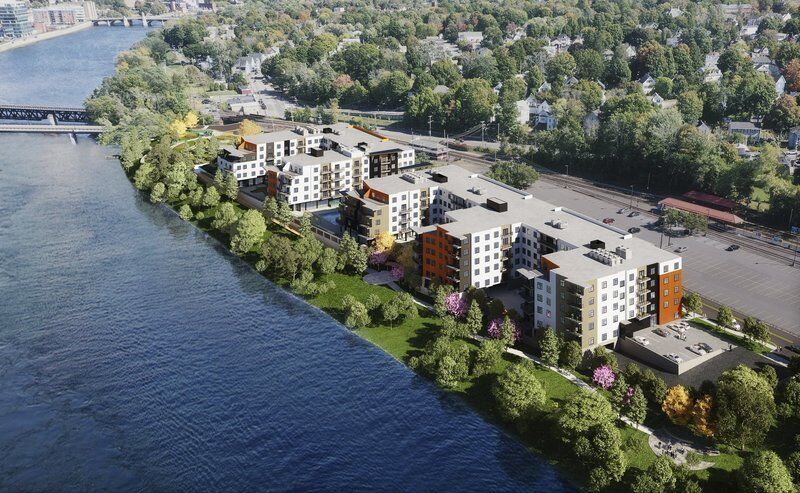 Courtesy imageAn artist's rendering of the riverfront project shows its two buildings. When viewed from above, the larger building has an E shape and the other building a C shape.

Courtesy imageThe project, when viewed from above in this artist's rendering, shows a public park and amphitheater closest to the river.

Courtesy imageAn artist's rendering of the project shows the Merrimack River and downtown Haverhill in the background.

Courtesy imageAn artist's rendering of the riverfront project shows its two buildings. When viewed from above, the larger building has an E shape and the other building a C shape.

HAVERHILL — A proposed $100 million project to transform the long-vacant Ornsteen Heel property on the Bradford side of the Merrimack River into a 290-unit apartment complex goes before the City Council Tuesday night.

If the council approves the project, it will be the latest in a series of riverfront projects coming to Haverhill.

Mayor James Fiorentini said the project would clean and cap the former factory site, creating what he calls a "beautiful riverfront park" for the public — plus an amphitheater.

"They would put in a trail along the river which would connect up to our existing rail trail," Fiorentini said.

The project, named "The Beck," would generate $19 million over 20 years for city, the mayor said. "Beck" is a term for a mountain stream.

The developer, Procopio Companies of Lynnfield, plans a large public park and two five-story buildings — one of them a C-shaped structure and the other an E-shaped structure.

Tailored to professional single people and couples who generally rely on public transit such as the commuter rail, the project would offer 30 studio apartments, 148 one-bedroom units, an additional 21 one-bedroom units each with a den, and 91 two-bedroom units.

Ten units would be reserved as workforce housing with rental prices set at the area's median income.

Retail stores and restaurants are planned for the project. Most of the 320 parking spaces for residents would be under the building and visible only from the river. The project would provide 27 public parking spaces.

Michael Procopio, CEO of Procopio Companies, said that in addition to the former Ornsteen property being sold by the city to his company for $1 million, he also has a contract to buy two other neighboring properties — the Skateland roller skating rink and an abandoned gas station at the southern end of Comeau Bridge.

"We would be looking to begin road and traffic improvements this summer, and begin site work late winter and construction early next spring," he said.

The project would include a roughly 1,500-foot-long boardwalk along the river, which would be open to the public, and a large public park at the Comeau Bridge side of the project.

Procopio said members of the public were involved in designing the public space to ensure it would satisfy the wishes of Haverhill residents.

"We created one large park designed with public input, along with small pocket parks and shade areas, all connecting with the boardwalk," he said. "The entire riverfront will be accessible to the public."

He said a seasonal dock would allow for residents of the complex and the public to launch small water craft such as kayaks and canoes.

Procopio said his company was awarded a MassWorks grant of nearly $2 million to improve roadways and intersections next to the property and the surrounding area, and his company is investing more than $500,000 for that work as well.

He said road work would include realigning Railroad Avenue so drivers will have greater ease on that street; widening Railroad Avenue and sections of South Elm Street, Blossom Street and Laurel Avenue; adding sidewalks and bike lanes around the project to link to those streets, improving crosswalks and adding traffic signals; improving access to the rail trail; and synchronizing traffic signals at both ends of Comeau Bridge.

"This would be a massive improvement and will vastly improve safety," he said.

Fiorentini said a traffic engineer reviewed the plan and determined the improvements will allow for improved traffic flow in the area.