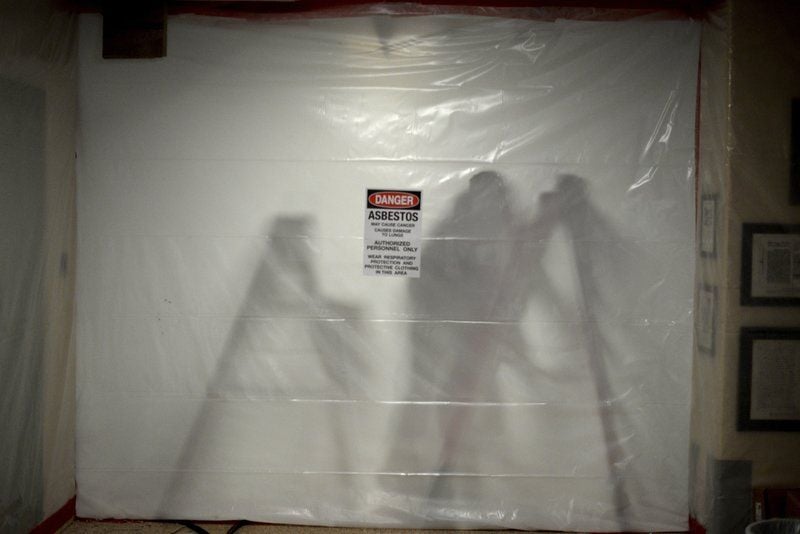 PAUL BILODEAU/Staff photoA worker behind a plastic seal cleans an area after massive flooding from a broken pipe at Consentino School. 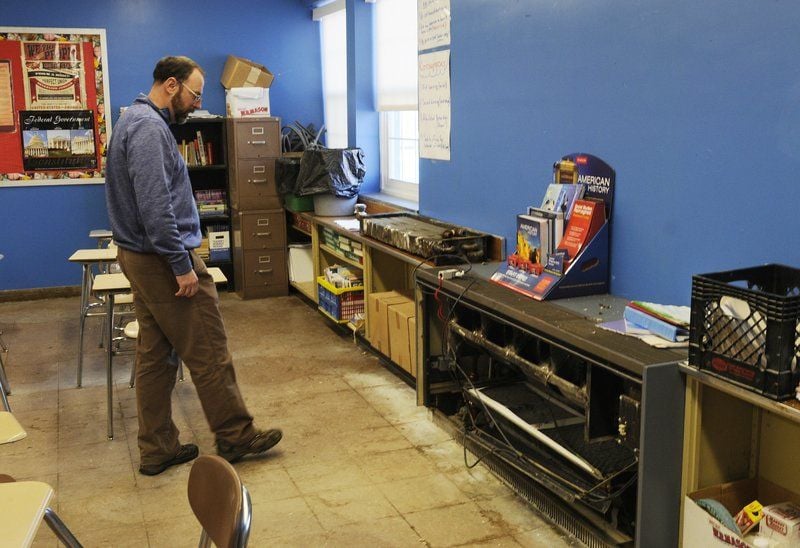 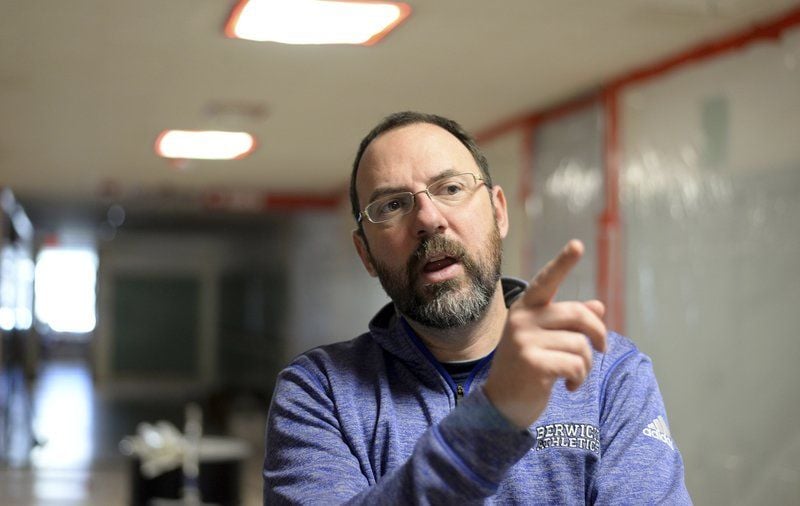 PAUL BILODEAU/Staff photoJared Fulgoni, director of strategy and accountability for Haverhill schools, talks about the flooding damage at Consentino School. 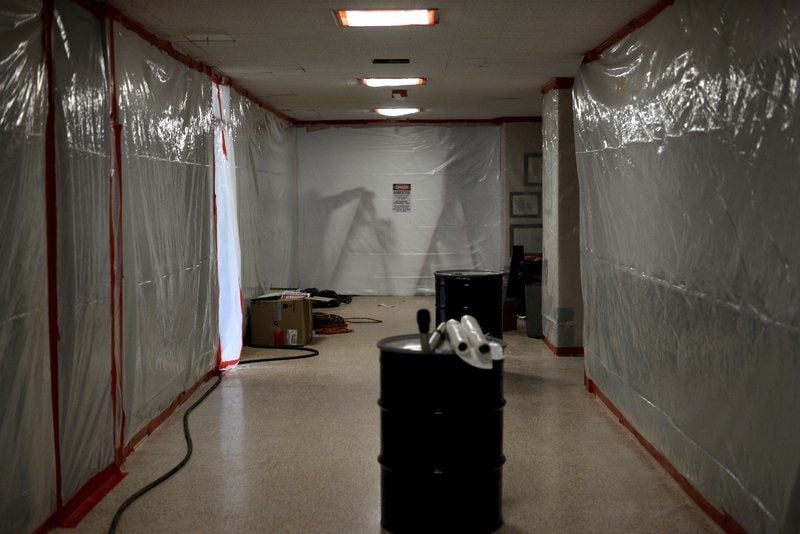 PAUL BILODEAU/Staff photo.A hallway at Consentino School is covered with plastic to keep any contaminants from spreading.

PAUL BILODEAU/Staff photoA worker behind a plastic seal cleans an area after massive flooding from a broken pipe at Consentino School.

PAUL BILODEAU/Staff photoJared Fulgoni, director of strategy and accountability for Haverhill schools, talks about the flooding damage at Consentino School.

PAUL BILODEAU/Staff photo.A hallway at Consentino School is covered with plastic to keep any contaminants from spreading.

HAVERHILL — It's like a scene out of a science fiction movie.

The hallways next to the Consentino School library are sealed in plastic to prevent anyone other than hazardous materials workers from entering the library. Students' lockers are also covered in plastic.

Large air filtration devices stacked in the school's main hallway are channeling air to an outdoor courtyard to prevent any contaminants from spreading through the building. Workers dressed in full body suits and air filtration masks have been removing ceiling panels and collecting wet asbestos materials.

All this work is being done because a heating unit in a second-floor classroom above the library sprang a big leak on Monday.

The leak caused flooding that all but destroyed the library, school officials said. The flooding also damaged sections of hallways and an elevator shaft just outside the library. Computers in the library were ruined, as were books and other materials.

School Superintendent James Scully said the cost of the damage has not been fully calculated yet, but it is expected to easily reach $500,000 or more. He gave that figure to The Eagle-Tribune after visiting the school early Wednesday night.

The work will include cleanup; removal and replacement of walls, ceilings and electrical fixtures; and replacement of computers and books ruined by the flooding, Scully said. The school district's insurance company and an insurance adjuster are doing calculations, he said.

Somehow, portraits of the school's past principals that were hanging on a wall of the library were left undamaged.

But those leaks were minor compared to the damage at Consentino, which school officials hope to reopen for Monday's return of students following this week's vacation.

officials said the library will continue to be sealed off from the rest of the school and will be off limits to students and staff while repairs are made. Workers will be on site, but only after school hours, officials said.

"A firm that is working with us as our consultant is performing air monitoring and project management services," Geary said, noting that MassDEP officials planned to stop by the school on Wednesday to make sure all procedures and protocols were being followed.

Geary said Consentino was built in 1969, when the use of asbestos as a fireproofing material was allowed. He said current safety standards allow for undamaged and undisturbed asbestos to remain in place. The asbestos that is being removed was affected by the flooding, he said.

"The library has been completely sealed off and will not be a danger to students," Geary said. "Before anyone is allowed back into the school, our consultant will take air samples to make sure it is safe."

An elevator shaft outside the school library that filled with water, hydraulic fluid and oil because of the flooding will be pumped out by an environmental clean-up company, officials said. They said an elevator company will conduct a full assessment before the elevator returns to service.

Scully praised the work of Geary and his maintenance staff.

"We're lucky in Haverhill schools to have people who jump in in an emergency,'' the superintendent said. "One of the individuals on the scene right from the beginning is Tom Geary. He and his crew and the school custodians have all jumped in to do everything possible, along with the environmental firms, to make sure we can get this school open Monday.''

Jared Fulgoni, the school district's director of strategy and accountability, took an Eagle-Tribune reporter and photographer on a tour of the school on Wednesday.

Fulgoni pointed out the extreme precautions being taken by workers who are removing asbestos and other contaminants from the library and surrounding hallways, as well as from the elevator shaft.

Warning signs about the physical dangers of asbestos are taped to plastic that seals off the hallways where work is happening.

"They are scraping out wet, damaged material, including old asbestos fireproofing insulation," Fulgoni said. "They are starting with the hallways so we can reopen the school on Monday. Then they will gut the library, which will remain sealed off from the rest of the building."

The leak that caused the damage began in a heating unit that sits against a wall in Room 39, a social studies classroom on the second floor of the school. Flooding also stained floor tiles in that room and left a dank odor that will be addressed with ventilation units, school officials said.

Fulgoni said anything that got wet, such as ceiling tiles and walls, will be removed and disposed of.

He said there are no non-ambulatory students at Consentino who need to use the second floor, so the broken elevator will not affect students.