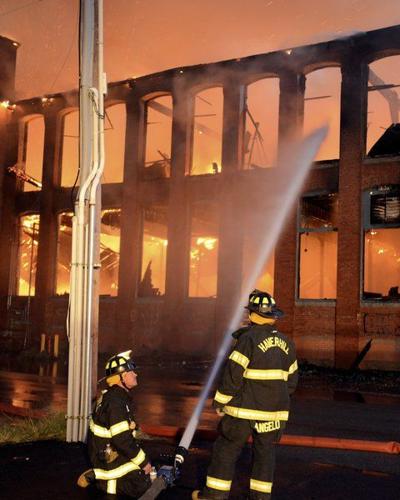 RYAN HUTTON/Staff Photo Haverhill firefighters douse the vacant mill on Stevens Street after the ongoing fire had collapsed the roof and second floor on Sunday night. 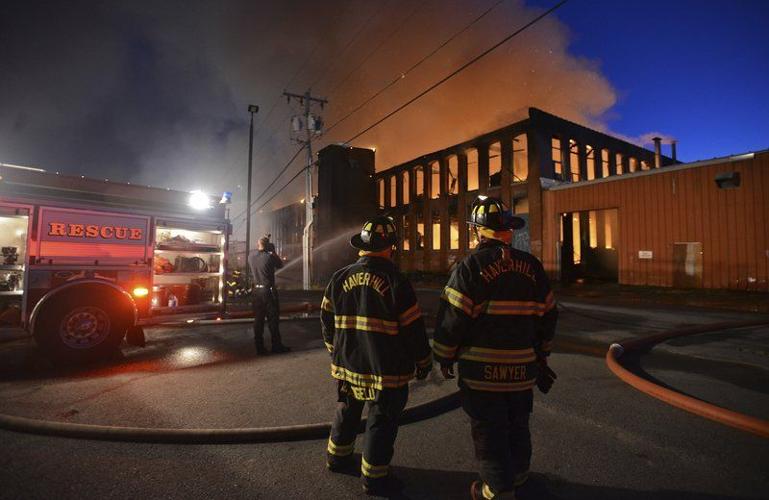 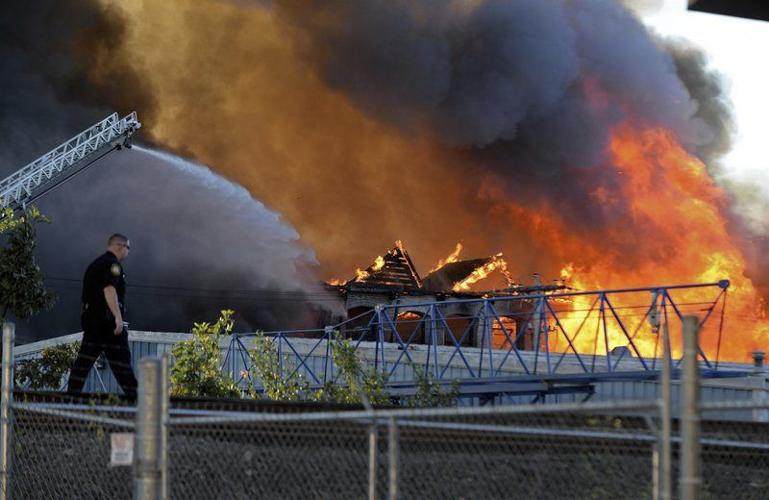 RYAN HUTTON/Staff photosA Haverhill police officer clears spectators off the railroad tracks between Hale Street and Stevens Street where an eight-alarm fire broke out in an abandoned mill. 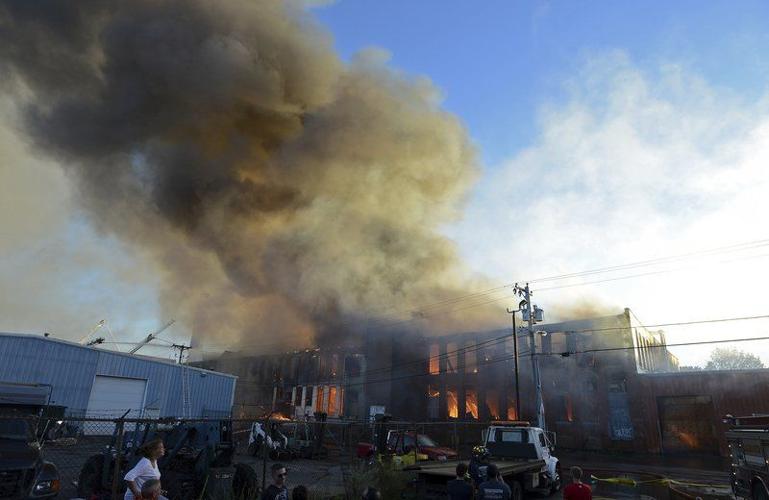 Smoke billows into the sky from the eight-alarm fire as it consumes a building in Haverhill. 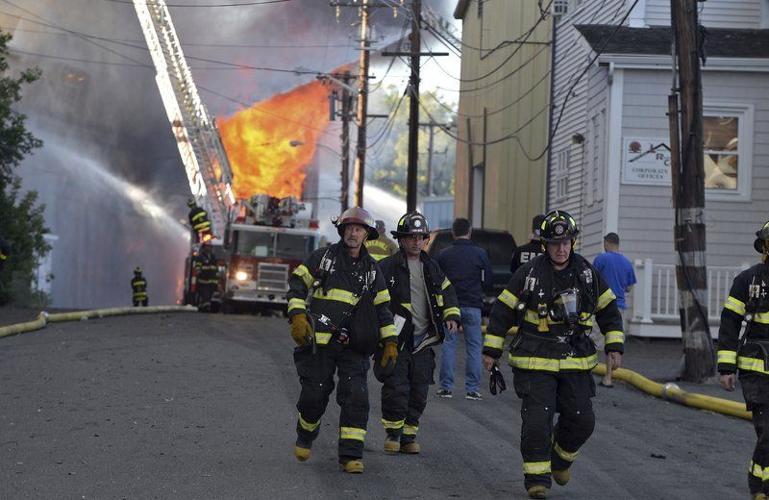 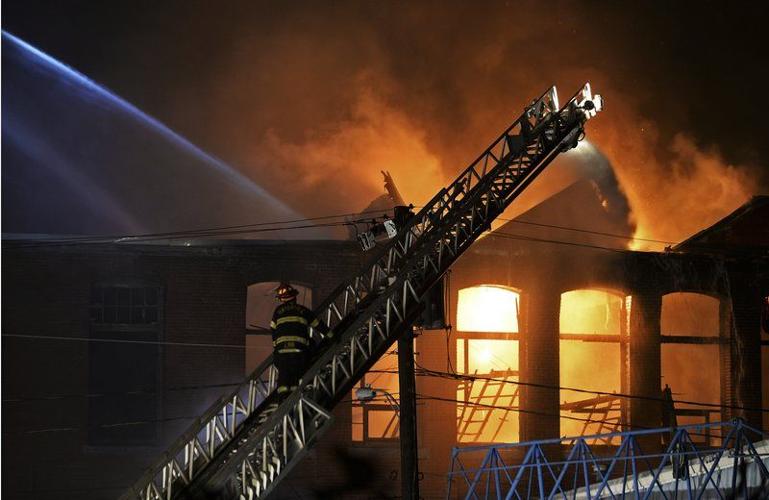 RYAN HUTTON/Staff Photo Haverhill firefighters douse the vacant mill on Stevens Street after the ongoing fire had collapsed the roof and second floor on Sunday night.

RYAN HUTTON/Staff photosA Haverhill police officer clears spectators off the railroad tracks between Hale Street and Stevens Street where an eight-alarm fire broke out in an abandoned mill.

Smoke billows into the sky from the eight-alarm fire as it consumes a building in Haverhill.

HAVERHILL — Firefighters battled a eight-alarm blaze well into the night Sunday at a mill building on Stevens Street adjacent to the Little River just off Lafayette Square.

The fire broke out just after 5 p.m. and firefighters were still on the scene after 10 p.m.

Smoke could be seen from as far away as Newburyport to the east, and North Andover to the west, as departments from across the region rushed to assist Haverhill firefighters.

Departments from Andover, Boxford, Lawrence, Merrimac, Newburyport, Rowley, Salisbury and West Newbury were just a few of the many Essex County departments to send help, while firefighters from Atkinson, Hampstead, Newton, Plaistow, and Salem, N.H., also showed up at Lafayette Square to lend a hand.

Deputy Fire Chief William Laliberty said that an investigation into the cause of the fire would be begun immediately after firefighters put it out.

The fire was in an area of old mill buildings the city was targeting for redevelopment into housing, much as had been done with the former shoe mills around Washington and Essex streets. The Stevens Street area had recently been rezoned for residential uses.

Mayor James Fiorentini said that a group is coming to meet with city officials about redeveloping the vacant buildings on Tuesday.

“It’s an incredible shame that these buildings went up,” he said late Sunday afternoon as the mill was still fully involved. “I know our chief (Jack Parow) has set up a firewall to try and contain it and there has been great cooperation between the fire departments.”

Fiorentini stressed the number one concern at that moment was safety.

“I have not heard of any injuries,” he said, adding that he was knocking on doors on North Broadway when he heard about the fire. “All the neighboring communities are here helping us out. We’re very grateful.”

According to city records, the Stevens Street building and property are valued at $1.2 million.

Several hundred people lined Winter and Hale streets to get a look at the blaze as flames reached up the side of the building, which several years ago had been the Hudson Machinery Company. Ladder trucks were pouring water on the fire in an attempt to bring it under control as people milled about with camera phones held high, documenting the former home of Hudson Machinery’s smoky demise.

“I was at the event at Tattersall Farm earlier, saw the smoke and headed home,” said Elaine Barker of Broadway, adding she was shunted all over the city trying to get home. She said she feels bad about the fire.

“I’ve lived here my whole life and I was looking forward to this building being the anchor for the revitalization of Lafayette Square,” she said.

Andrew Greeley was riding his bicycle back from the city’s downtown bus station when he saw the smoke and said he couldn’t breathe once he got closer to Lafayette square.

“It just went up so fast. It was intense,” he said.

Greeley said his boss, now in his 80s, used to live behind the mill and was shaken up when he first heard about the fire.

Economic Development Director William Pillsbury said that redevelopment talks will still go on in the area, even if the building is destroyed.

“It’s still an area of great interest, which is why this is such a disturbing situation,” said Pillsbury. “Something like this could potentially change things drastically.”

Embers floated through the air and caught nearby brush on fire behind the Haffner’s gas station in Lafayette Square as fire engines from Newburyport and Boxford arrived to assist with the fire.

One of the building’s owners, Barry Levine of Groveland, was in Lafayette Square during the fire. Levine said the building had been sold, was ready to close, and had been empty for the last three years.

He told The Eagle-Tribune that he suspects the fire may have been started by kids or a homeless person.

“There have been intrusions in that building recently,” he said, adding that there had been a small trash fire there earlier this week.

The fire is the largest the city has seen since Feb. 10, 1989, when four buildings at 70 Washington St. burned in a 10-alarm fire that caused millions of dollars in damage, according to the book “32 years on a Home Town Fire Department” by former Haverhill firefighter Ralph Brown.