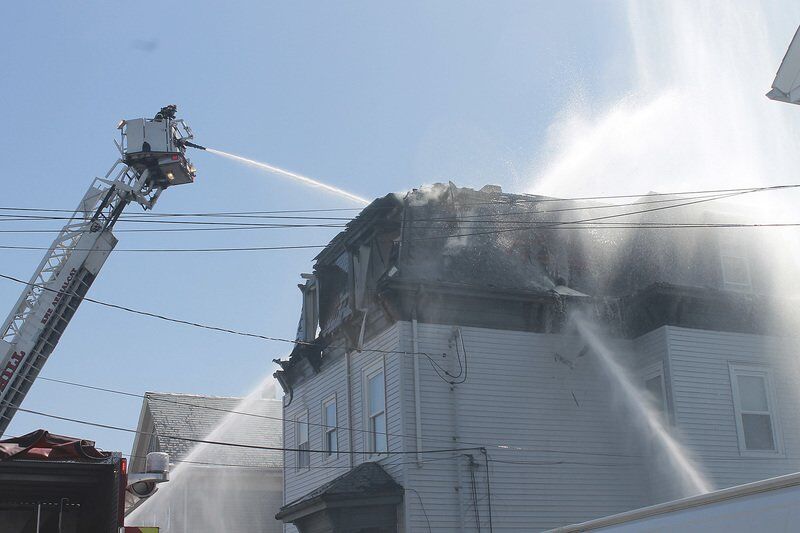 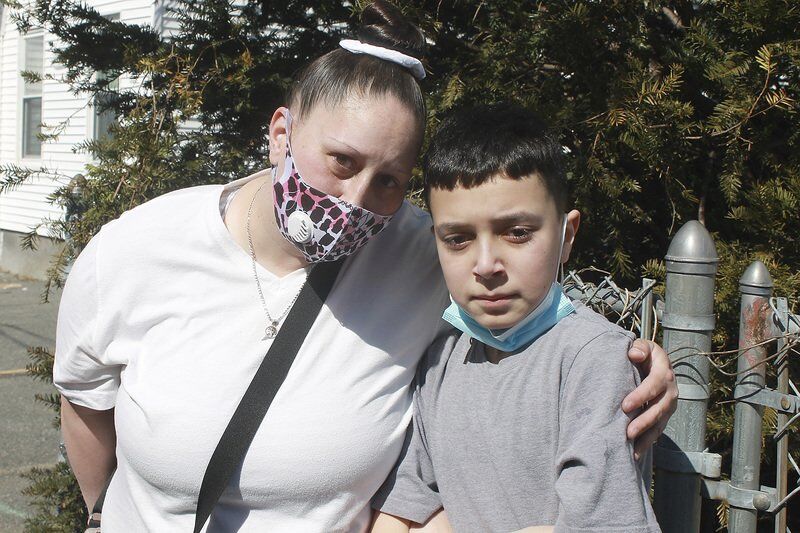 HAVERHILL — As fires go, this could have been much worse.

After flames spilled out of the third floor of an apartment building at 38 Jackson St. just after noontime Monday, several fire trucks rushed to the neighborhood. Crowds of neighbors gathered, watching and wondering whether everyone would get out.

Firefighters battled the blaze from above with a ladder truck and from the ground. Pieces of the burning roof flew in all directions from the force of the spray, while smoke filled the neighborhood. Nine residents of the burning four-unit building escaped safely, thanks to a neighbor who kicked in the front door and banged on apartment doors.

Despite the drama, no one was injured, fire officials said. They said it appears some of the tenants' possessions may even be salvageable.

After the blaze was extinguished and the neighborhood was clear of smoke and debris, the building was turned over to its owner, fire Chief Robert O'Brien said. He said it's up to the owner whether tenants will be allowed back into the building to retrieve what is worth saving.

O"Brien said firefighters were able to limit most of the fire damage to the third floor, but water ran into the lower two floors, resulting in the building being declared a total loss.

The improper disposal of smoking materials was determined to be the cause of the fire, according to an announcement by O'Brien, police Chief Alan DeNaro and state Fire Marshall Peter Ostroskey. O'Brien said the investigation by Haverhill fire officials and police and state police assigned to the state Fire Marshal's Office shows the fire started on a roof that extended out below the third floor of the building.

He said investigators believe a smoker tossed cigarettes out a third-floor window, igniting the roof or debris in a gutter along the roof, or perhaps debris in a gap between the gutter and the building.

"It's important to dispose of smoking materials safely in an ashtray or a can with sand or water, especially at this time of year when winds can quickly fan cigarettes back to life in dried grass, leaves or mulch," O'Brien said.

Ostroskey said there have been many terrible fires in the past two weeks resulting from smoking materials. Those fires have left many people homeless, he said.

He said smoking is the leading cause of fires that kill people. In 2019, smoking caused 21 percent of fire deaths in Massachusetts homes, he said.

Deb Duxbury, disaster program manager for the American Red Cross of Northeast Massachusetts, said a disaster team provided services to eight people who were displaced by the fire.

Duxbury said that prior to the pandemic, this kind of team would typically arrive on the scene of a fire or a natural disaster, such as a hurricane, and begin gathering personal information from displaced residents. She said now the team does most of its work mostly by phone after fire officials gather up essential bits of information and relay it to the Red Cross.

Duxbury said services provided to residents displaced by the Haverhill fire include financial help that can be used for a variety of purposes, such as a hotel stay, food or clothing. The Red Cross also helped pay for medical prescriptions that were lost, she said.

Follow-up case workers referred the displaced residents to other community-based agencies such as Ruth's House and the Salvation Army for assistance they can provide, Duxbury said.

Christina Sheldon, who lived on the second floor with her son Aaron Boldon, 11, a sixth grader at the Consentino Middle School, said she was in the process of moving to another apartment in Bradford and had only moved a few things before the fire. She said she believes her furniture, clothing, television sets and her son's new computer he got for Christmas were all ruined by water.

Consentino Assistant Principal John Mele said he replaced the boy's school-provided Chromebook so he can continue with his school work.

"We're doing whatever we can to help them get back on their feet," he said about efforts in Consentino's school community to help Sheldon and her son.

As of Tuesday, two GoFundMe pages had been set up, including one for Sheldon and her.

To find the pages, search GoFundMe for "Help Christina & son they lost everything in fire" (organized by Corina Crowell), and "Jackson st house fire Ollman family" (organized by Amber Jordan and Tanya Ollman).