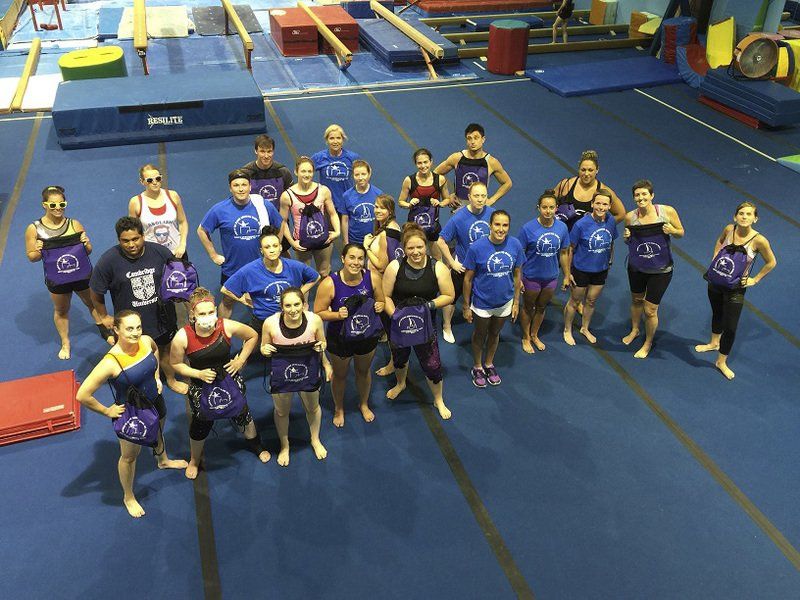 These men and women from various countries attended an adult gymnastics camp created by a Haverhill woman. 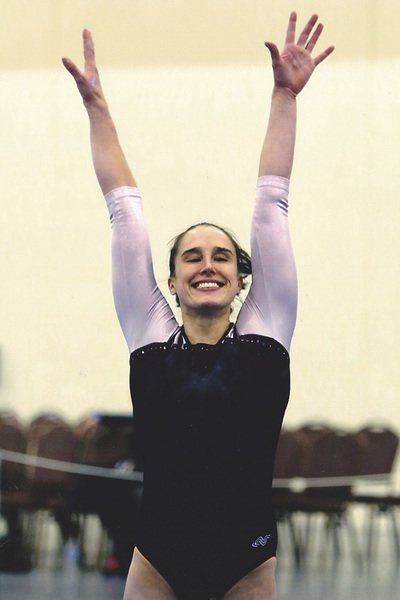 Gina Paulhus of Haverhill after she successfully completed her balance beam routine at the 2015 Winter National Championships.

These men and women from various countries attended an adult gymnastics camp created by a Haverhill woman.

Gina Paulhus of Haverhill after she successfully completed her balance beam routine at the 2015 Winter National Championships.

HAVERHILL — If you're an adult gymnast, it can be a lonely sporting life, Gina Paulhus said.

Because most gymnasts are 18 or younger, it's tough for adults to find a place to train with other adults, said Paulhus, a gymnastics expert and personal trainer from Haverhill.

So Paulhus decided to create what she believes is the world’s first ever all-adult gymnastics camp. It took place over the weekend of July 17 to 19.

The idea worked. The camp drew 40 adult male and female gymnasts from the United States, Canada and the United Kingdom, Paulhus said.

Paulhus, the AAU Junior Olympic Level 8 Adult Gymnastics Champion in 2013 and 2014, said the camp was born out of the idea to offer adults a judgement-free zone to learn gymnastics drills and techniques, while also having the opportunity to socialize outside of the gym.

"As a competitive adult gymnast, I had always thought about how fun it would be to go to an adult gymnastics camp, but I wasn’t aware of an all-adult camp," Paulhus said.

"As a trainer, I really enjoy promoting fun ways to stay active, and an adult gymnastics camp is a perfect way to do just that," she said.

Offering an adults-only gymnastics camp is a very unusual thing, Paulhus said, as most gymnasts are 18 or younger.

"Almost everyone who won the Olympics did so at around age 16, although it's different for males, where strength is essential," she said. "Also, male gymnasts have an easier time finding a place to train.

"I've talked to so many people and no one ever heard of an adult camp," she said. "Although some camps will have a week where adults can attend, but they'll likely be with kids. This camp was exclusively for adults."

Of the 40 adults who attended the camp, eight were men. Participants ranged in age from 23 to 61 and all of them embraced the slogan, "Proud to Hang Around Bars All Night." Paulhus said that didn't literally happen, as most of the athletes turned in early to keep up with the rigorous schedule of the training camp.

"They came to get some coaching so they could learn and go home and be able to practice on their own," Paulhus said. "There aren't usually enough adults to form this type of a class, so there aren't enough adult gymnasts to hold adult classes."

Participants worked hard, but also fit in time for fun.

"Everyone was super friendly and helpful to one another and instant friendships were made," Paulhus said. "The hotel and restaurants were within walking distance from the gym."

Following Saturday's workouts, the group enjoyed a dinner at a restaurant together.

"Since New England is known for its lobster, people started putting a lot of effort into posing as a lobster for pictures," Paulhus joked. "That sure generated some laughs."

On Sunday, the presence of a TV camera filming for "New Hampshire Chronicle'' perked everyone up for the afternoon training, Paulhus said.

"We also had an optional show in the afternoon where the groups presented what they had worked on at camp,'' she said. "Many new skills were learned, old skills were revisited, and current skills were polished. Campers also left with plenty of drills they can work on at home."

The feedback Paulhus received was so positive that she decided to do the camp again.

"Every participant said they wanted to come back next year," she said. "I plan to hold a winter camp (Jan. 16 to 18) because of the interest generated from this camp. They didn't want to wait another year and wanted to do it sooner."

Paulhus hopes to offer the camp twice a year from this point on.

"We recently started a boot camp for fitness training for men and women in which we incorporate basic gymnastics," she said.