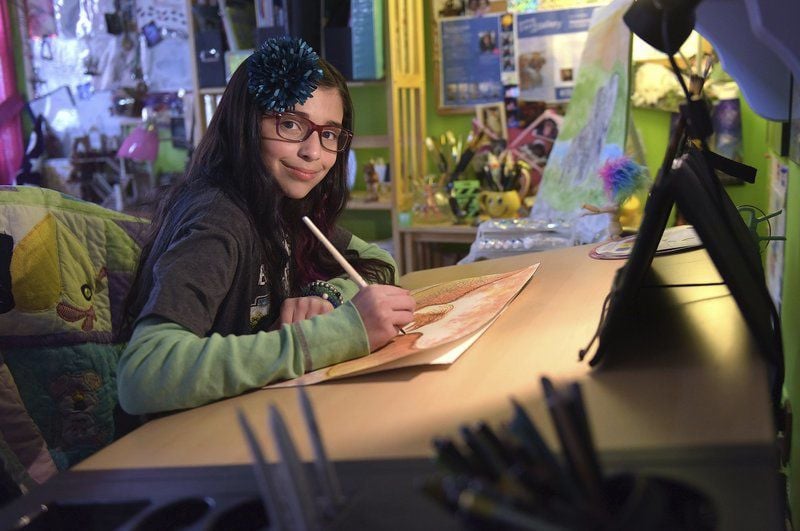 TIM JEAN/Staff photoArtist Mackenzie Casto, 12, of Bradford, works on a watercolor painting in her home studio. Mackenzie has 10 pieces of her work on display at Boston Children's Hospital and recently won an award in Newburyport for her art. 3/27/18 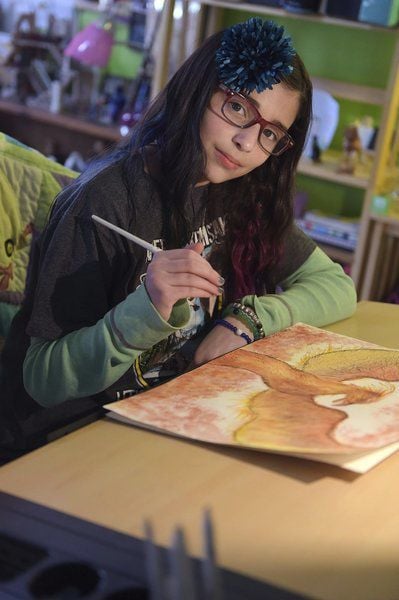 TIM JEAN/Staff photo Artist Mackenzie Casto, 12, of Bradford, works on a watercolor painting in her home studio. Mackenzie has 10 pieces of her work on display at Boston Children's Hospital and recently won an award in Newburyport for her art. 3/27/18

TIM JEAN/Staff photoArtist Mackenzie Casto, 12, of Bradford, works on a watercolor painting in her home studio. Mackenzie has 10 pieces of her work on display at Boston Children's Hospital and recently won an award in Newburyport for her art. 3/27/18

TIM JEAN/Staff photo Artist Mackenzie Casto, 12, of Bradford, works on a watercolor painting in her home studio. Mackenzie has 10 pieces of her work on display at Boston Children's Hospital and recently won an award in Newburyport for her art. 3/27/18

HAVERHILL — Inspired by an online video of a boy who donates stuffed animals to hospitalized children, 12-year-old Mackenzie Casto of Bradford decided to share her art with young patients at Boston's Children's Hospital as a way to brighten their day.

She submitted 10 watercolor paintings of animals to the hospital, which were put on public display. And now the hospital plans to hold a contest to determine which of Mackenzie's paintings will become part of a permanent exhibit there.

"It's super exciting to have my art on display and I was super happy to make one little girl happy by giving her one of my paintings in person," Mackenzie said. "People will get to vote on the ones they want to keep on permanent display and I'll donate those to the hospital for children to enjoy."

A student member of the Greater Haverhill Arts Association, Mackenzie recently submitted a watercolor painting of an owl to the Newburyport Art Association's Young and Budding Artist Show. Her painting won an award for Excellence in Watercolor, which came with a $50 prize.

"I do some landscapes, but I mostly stick with animals," Mackenzie said. "My favorite subjects include wolves, cats, owls, foxes, sea turtles and giraffes ... which I love because they are so cute."

The Hunking School sixth-grader said she gets a lot of her ideas for her marine life paintings from visits to the the Boston Aquarium.

"I also painted a jellyfish and rockhopper penguin, both of which I saw at the aquarium," she said.

Neither her parents, Mark and Tammy Casto, nor her brother, Mark, a freshman in Haverhill High School's Classical Academy, are artists.

"We don't know where she gets it from, although her grandmother Diane likes to do quilts and other crafts," Tammy Mackenzie said.

Mackenzie has been drawing and coloring since she was a toddler.

"I think art has the magic of bringing people together and making them happy," she said. "I like bringing animals to life through my art."

Two years ago she began taking lessons at the Joan Gessner studio in Amesbury, where Mackenzie focuses on watercolor painting.

In a typical week, she'll spend two to three hours a night painting, plus a few hours more on weekends.

"I like watercolor because it's hard and you can't hide your mistakes," Mackenzie said. "Once you make a mistake, you can't really fix it, although I'll try to work around it.

"It's a medium that works very well with animals," she added. "And I like it because the colors are mild and soft."

Some of her paintings are done from looking at photos, some of which she takes herself.

"I also go outside to places like Wolf Hollow in Ipswich to take pictures," she said. "They have real wolves there and they inspired me to do some of my wolf paintings."

She's even sold a few pieces.

Earlier this year, Mackenzie was searching for a hospital where she could display her art to brighten the surroundings for young patients.

She'd heard about Boston Children's Hospital and knew that many of its young patients stay there for quite a while.

"We reached out to the creative arts director, Jessica Finch, who told us they accept artist submissions," Tammy Casto said. "She told us that she'd love to have Mackenzie's art for display there."

Mackenzie worked on 10 paintings, including a monkey, a seal, an elephant, a rockhopper penguin, a sea turtle, a giraffe, a fox and other creatures.

"I get a good feeling looking at animals and I thought other children would too," she said. "Everybody loves giraffes."

Finch arranged for the Casto family to be part of a meet-the-artist night in February. Along with her parents and brother, Mackenzie was accompanied by her grandparents, Tony and Diane Casto of Watertown. Several weeks later, Mackenzie's family delivered the art with the intention of giving one or more of the pieces to young patients there.

That night, Mackenzie met a family whose 11-year-old daughter was awaiting a liver transplant.

The girl noticed Mackenzie's paintings, as it was new art she had not seen before, and she loved the pieces, especially a painting of a fox.

Mackenzie wanted to give the girl the painting she liked the best, but was unable to hand it to her in person as the girl was in the Medical Intensive Care Unit and couldn't leave her room. But the two of them connected through Facetime and talked about their lives.

Two weeks later, Mackenzie hand delivered her painting to the girl, and both of them spent time painting in the girl's hospital room.

"I felt very happy as I thought it would help take her mind off the many medical procedures she was going through," Mackenzie said. "I also learned that she wants to be an artist too."

In a letter to school officials in support of Mackenzie's hopes of organizing a fundraiser for the hospital's creative arts program, Finch called Mackenzie's artwork "quite remarkable, especially for her age."

"I was particularly impressed with her spirit and desire to help others through art," Finch said in her letter.