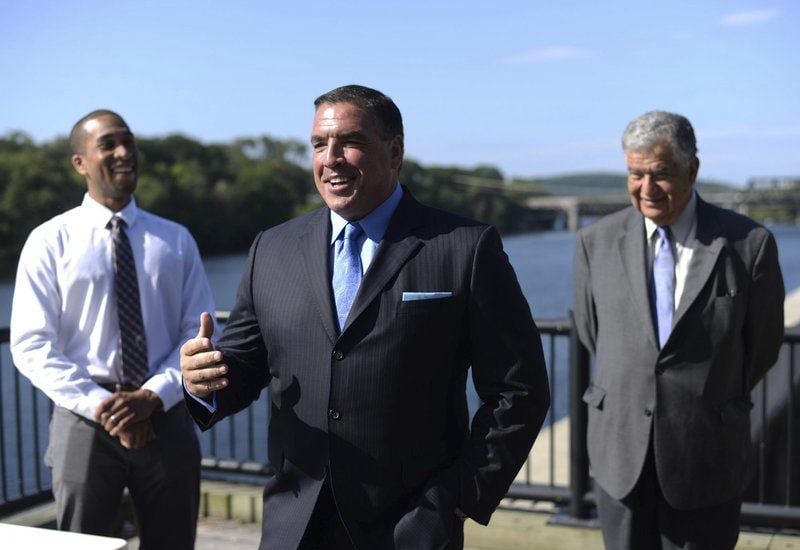 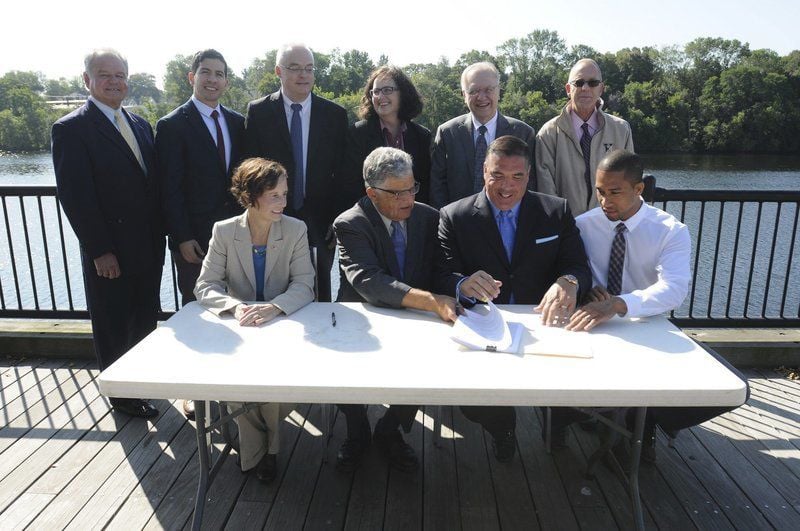 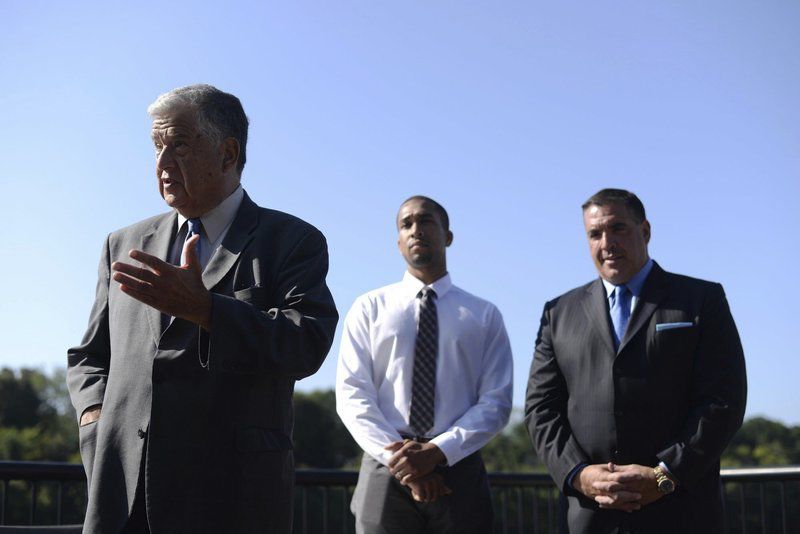 HAVERHILL — Local developer Sal Lupoli said the 10-story building he plans to build on downtown Merrimack Street will be unlike anything in the area.

Lupoli, who brought businesses and jobs to his Riverwalk complex in Lawrence says he wants to do the same thing in Haverhill.

His towering project, called "The Heights," is planned for what is now a municipal parking lot between the Rent-A-Center and Haverhill Bank. The building will have a high-end function space on the top floor that will overlook the Merrimack River and will feature an outdoor bar and fire pit.

"We can host weddings and meetings, or you can wait for a table in the boutique restaurant we have planned for the first floor," Lupoli said. "There's not another thing like it in the Merrimack Valley."

Lupoli was in Haverhill on Thursday where Mayor James Fiorentini signed a contract with MassWorks that will provide $1.9 million in funding for infrastructure improvements that will benefit the public and help support Lupoli's project. The ceremony was held on the boardwalk behind Haverhill Bank.

Fiorentini said the grant would not have happened without the support of Haverhill's legislative delegation.

"This is part of our overall vision for downtown and it (the grant) helps makes Sal's great project possible," Fiorentini said.

The funding will be used to extend the 860-foot long public boardwalk that runs from Harbor Place to behind Haverhill Bank, an additional 80-feet west, and will also pay to create two levels of public parking (57 spaces) at 192 Merrimack St., which is a building that Lupoli owns and will be torn down this fall. Green space will be created as well for the public to enjoy.

"This is what people want," state Rep. Linda Dean Campbell said about creating walking paths on both sides of the river. "People want to be out and be able to walk in their city at night... The whole concept of making Haverhill a walking downtown community is one of the most important strategic decisions you've all made."

The funding will also pay for underground utility improvements needed to support Lupoli's project, and will also pay to create a new landscaped walkway connecting the boardwalk to Merrimack Street, on the west side of Haverhill Bank.

"There's a lot of public infrastructure that needs to be upgraded for this and future projects," said Andrew Herlihy, the city's division director for Community Development.

Herlihy said the city is seeking another grant to further extend the boardwalk to Washington Square, with the ultimate goal of connecting it to the boardwalk behind The Tap Restaurant and all the way to the Comeau Bridge at the western end of downtown.

Lupoli said construction of his new building will begin by the end of the year, however, work on the boardwalk is expected to begin in October.

He explained that the first floor of "The Heights" project will include a boutique restaurant along with retail space.

Lupoli said he's actively trying to bring Northern Essex Community College into the project, in hopes the college will open a hospitality and culinary arts program on the second and third floors. The state recently issued a request for proposals for space for the two programs.

"I believe community colleges are a perfect fit for hospitality, which accounts for 10 percent of our nation's GNP," Lupoli said.

Floors four and five are being reserved for innovation and entrepreneurial space.

"We're looking to work with local entrepreneurs, and within their budget," Lupoli said.

"We would not be here today if not for the mayor and Gov. Baker," Lupoli said. "They all encouraged me as has the City Council."

William Pillsbury, the city's economic and development director, said MassWorks has been a vital component in the redevelopment of the downtown.

Campbell, who has been a tireless advocate for the Bradford Rail Trail, said that by extending the boardwalk, it will help bring new life and vitality to the downtown.

"When we finally connect the boardwalk to the bridge (Comeau Bridge) it will bring a tremendous amount of young families to the downtown and will be a tremendous asset to the city," she said.

Following the signing ceremony, Bevilacqua noted that Lupoli's project will boost the downtown through commercial tenants, market rate residences, and a restaurant that will draw people from throughout the area.

"This will bring a vitality to the downtown that long been needed," he said. "And with Sal's reputation, once he starts investing he doesn't stop. He has a proven track record of filling space.... he did it in Lawrence at the Riverwalk, he's doing it in Lowell and he's done it in Boston, which is a difficult city to build in. If anyone can turn around downtown Haverhill, it's Sal Lupoli."