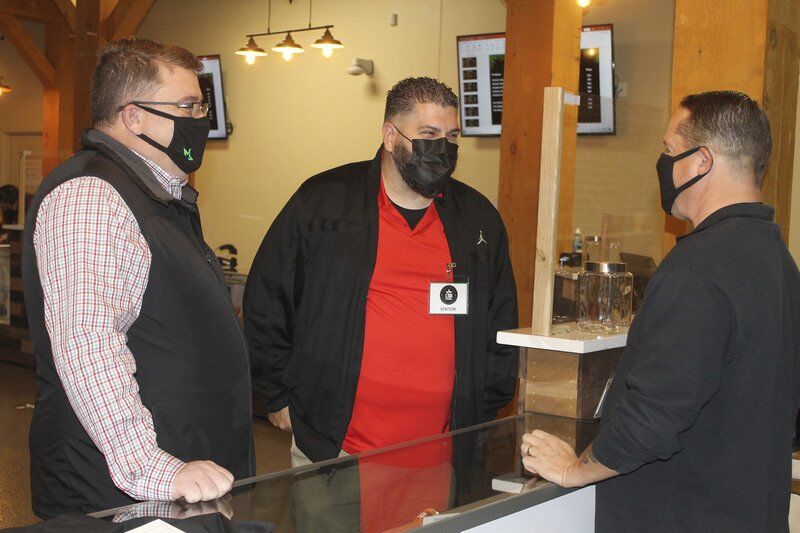 MIKE LABELLA/Staff photoDiscussing products for sale at CNA Stores on River Street are, from left, owner Robert DiFazio; his first customer when the shop opened, Stephen Mandile, an Uxbridge selectman and military veteran who advocates for veteran access to cannabis; and CNA sales representative Christopher Mansur. 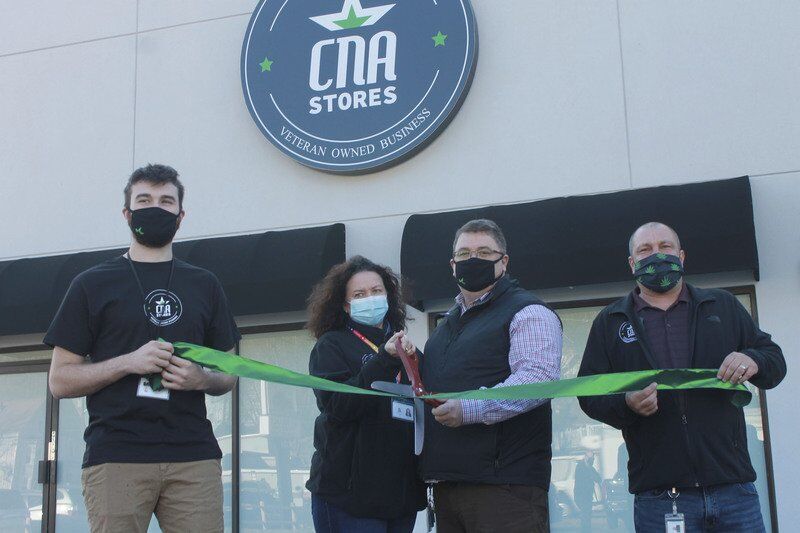 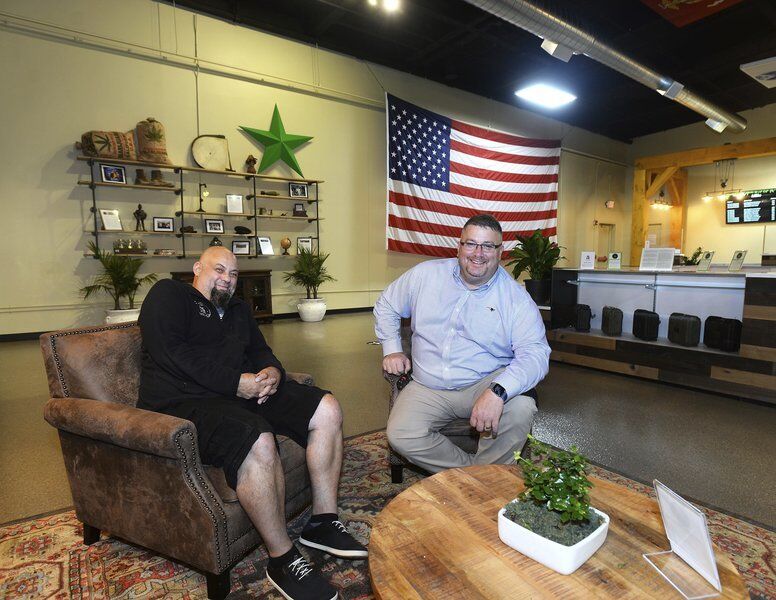 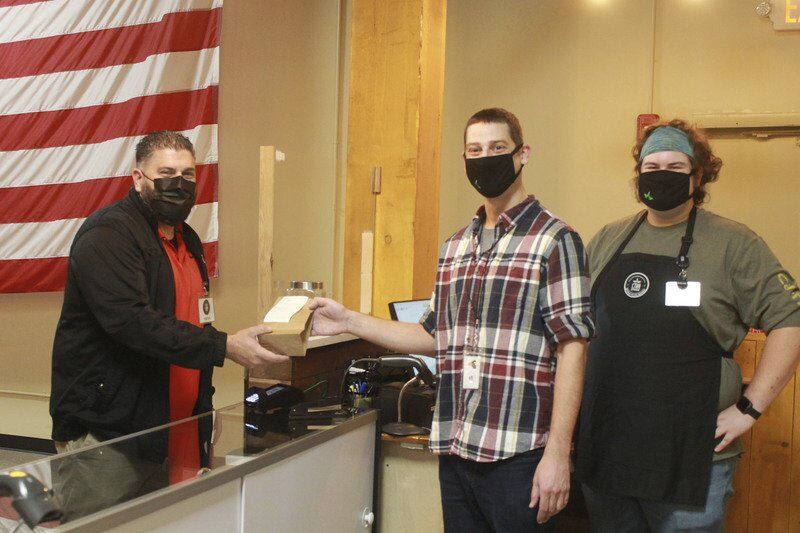 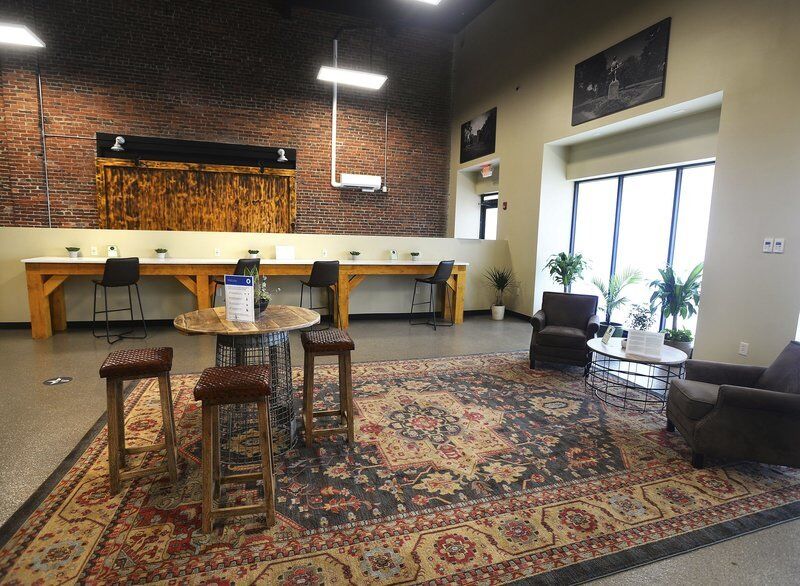 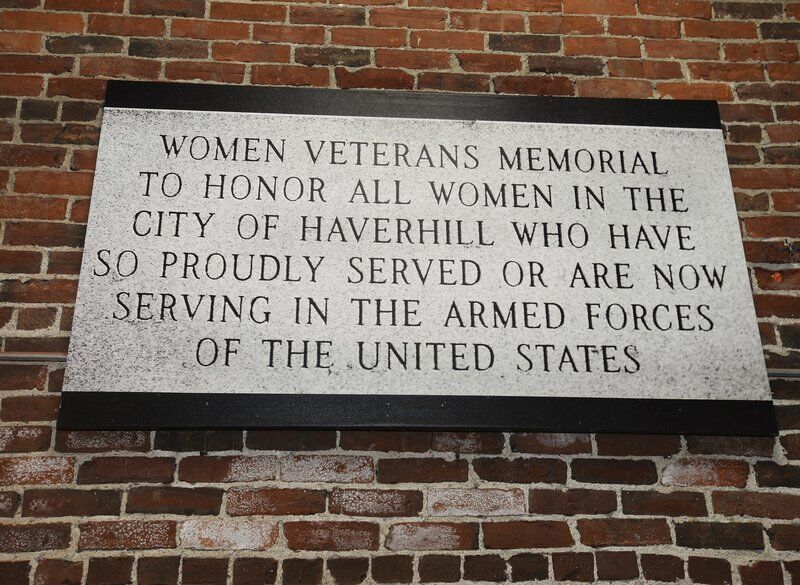 CARL RUSSO/staff photoCNA Stores honors veterans with displays like this photo of wording on the Women's Veterans Memorial Monument in Haverhill. 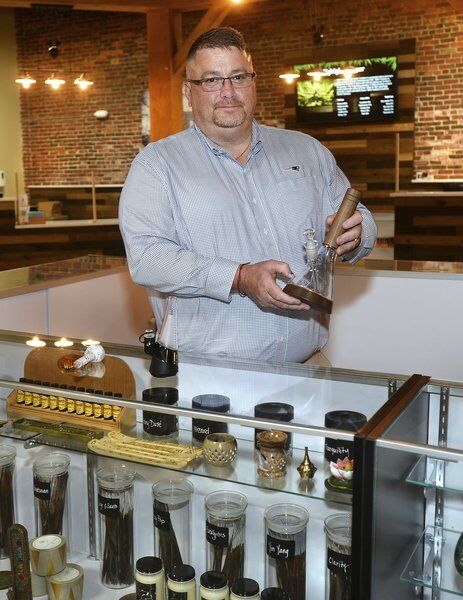 MIKE LABELLA/Staff photoDiscussing products for sale at CNA Stores on River Street are, from left, owner Robert DiFazio; his first customer when the shop opened, Stephen Mandile, an Uxbridge selectman and military veteran who advocates for veteran access to cannabis; and CNA sales representative Christopher Mansur.

CARL RUSSO/staff photoCNA Stores honors veterans with displays like this photo of wording on the Women's Veterans Memorial Monument in Haverhill.

Robert DiFazio of Amesbury, a Navy veteran, opened the shop — CNA stands for Completely Natural Alternatives — at 558 River St. on Tuesday morning, accepting appointment-only business. He was joined by his wife, Joy, and their son Niall, and the store's manager, Tom Rossi.

"It's a long time coming. With all the red tape, it's been a two- to three-year process," said DiFazio, who first met with neighbors to discuss the store in February 2019 and received a special permit from the City Council in July 2019. "We're hedging the fact that this industry is going to continue to grow."

CNA Stores is the second marijuana shop to open in Haverhill. A shop called Stem, owned by Caroline Pineau, opened in May in the heart of the city's downtown district at 124 Washington St. The City Council has issued special permits to two other shops, with the potential to grant two more permits for a total of six shops.

Full Harvest Moonz plans to open early next year at 101 Plaistow Road on the Plaistow line, according to owner Janet Kupris.

Construction is expected to begin in December at Mellow Fellows at 330 Amesbury Road, formerly the Seafood Etc. restaurant, as owners of that shop await their final license from the state Cannabis Control Commission, spokesman Phil Brown said.

CNA has a strong military veteran influence. The shop is owned is owned by a veteran and has veterans working there. Its first customer Tuesday was also a veteran — Stephen Mandile, an Uxbridge selectman and former sergeant in the Army National Guard. A retired disabled combat veteran, Mandile has worked to advocate for U.S. veterans in need of marijuana. He has filed legislation aimed at eliminating hurdles for disabled veterans to purchase the drug.

During his visit to CNA, Mandile purchased a small package of cannabis indica flower. He said retail cannabis shops are a benefit to veterans who enjoy the increased access to safe, tested products rather than relying on what he called the "gray" market or having to visit a doctor to obtain a medical marijuana card.

He said many veterans use cannabis products for issues such as anxiety, PTSD, pain and insomnia.

"Veterans we surveyed told us they are drinking (alcohol) a lot less and using tobacco products a lot less," Mandile said of veterans who use cannabis.

John Mura, 56, of Haverhill was one of the new shop's first appointments Tuesday.

"This is a very convenient place to shop," Mura said. "They have dedicated parking, which I like.''

Products include items from Sanctuary Medicinals, Sira Naturals, Holistic Industries and the Heirloom Collective, according to Scott Winters, director of business development and community outreach for CNA Stores.

The shop sells prepackaged items only and has a sale limit of one ounce of flower or its equivalent in edibles.

About 25 people work at CNA Stores, and of those about one quarter are veterans. About 20 percent of all employees are from Haverhill.

According to its permit from the city, CNA Stores is allowed to have 16 customers per hour — four every 15 minutes, by appointment only at this time with oversight by police Chief Alan DeNaro, fire Chief William Laliberty and City Engineer John Pettis. The shop must also get approval from those city officials if it wants to increase the number of appointments per hour or change its hours of operation.

DiFazio said CNA employees helped design the shop. Staff members contributed to the early design, and in some cases, built parts of the interior, DiFazio said.

With CNA's sense of military honor, respect and pride comes a love for its new hometown of Haverhill, said DiFazio. As often as possible, CNA used area retailers and contractors, including Axis Builders and Kitchen Design, the company next door to the marijuana shop.

Winters toured Haverhill to take photos of various landmarks. Those photos dot the walls of the CNA shop and accompany what DiFazio calls "museum art," with photos of items like the U.S.S. 420 and an airplane called the Mary Jane.

"Almost all of the work in here, with the exception of the walls, mechanical and electrical, was done internally by our team," DiFazio said. "They can now say, 'I changed that. I made this.' Now they're looking at it not just as a place to work, but somewhere that they helped build.

"That's what makes CNA different,'' he said. "We're trying to develop that caring culture for our employees and where they work, and hopefully that will translate over to our customers. I hope when people are here, they'll realize that."