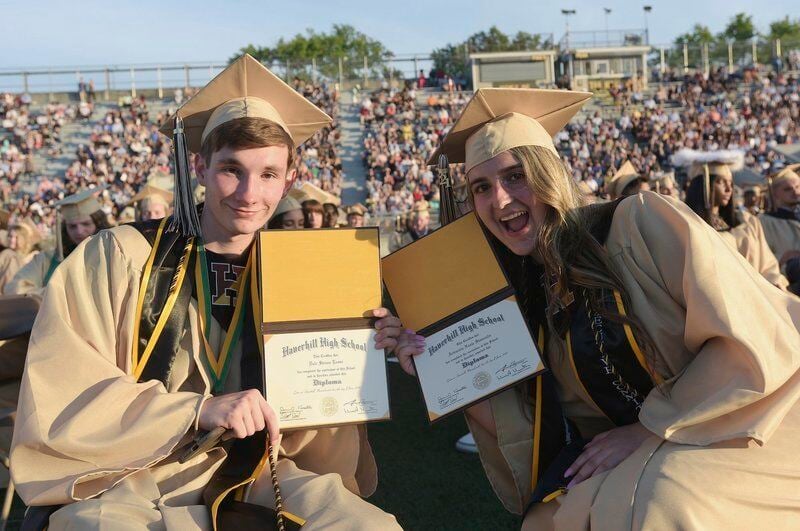 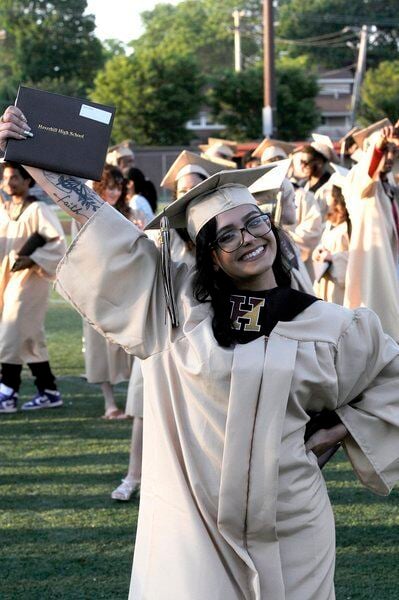 TIM JEAN/Staff photoStephani Castro is all smiles after receiving her diploma from Haverhill High School on Friday. 6/4/21 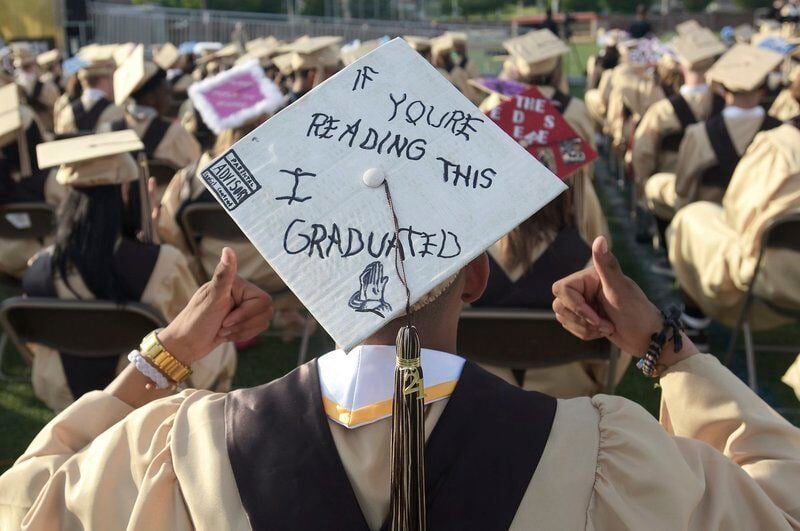 TIM JEAN/Staff photoRobert Wesley, who decorated his cap with "If you're reading this I graduated" gives a thumbs up while waiting for his diploma during Haverhill High School's graduation. 6/4/21

TIM JEAN/Staff photoStephani Castro is all smiles after receiving her diploma from Haverhill High School on Friday. 6/4/21

TIM JEAN/Staff photoRobert Wesley, who decorated his cap with "If you're reading this I graduated" gives a thumbs up while waiting for his diploma during Haverhill High School's graduation. 6/4/21

HAVERHILL — It's been a challenging year for the 2021 graduating class at Haverhill High School, but now it was time to celebrate what's to come.

Diplomas were presented to 464 graduates Friday night at Haverhill Stadium as families and friends gathered to honor the past year's challenges, successes, and prospects for the future.

"Hillie Nation" was out in full force to celebrate, showing off spirit in traditional gold colors, with families cheering and honoring this class that came through a year full of changes and unknowns.

School Superintendent Margaret Marotta told graduates to look around at their classmates, give them a smile, a fist pump, and remember their "beautiful faces."

"Remember the good times, and even the not-so-good times," Marotta said. "Soak in the memories like sunshine, they are yours to keep. Know you are forever connected as the Haverhill High School Class of 2021."

James Kritzas, class president, told his classmates it's been his joy to be part of the graduating class, together since 2017 and a group that symbolizes everything and more of what it means to be a Hillie.

"Over the past four years we have faced obstacles that have challenged us in all aspects of life," Kritzas said. "But regardless of the challenge, we persevered and moved forward. When students were fed up with recent national school violence, they spoke up. When the early college students feared their credit values would drop, they resisted. When students wanted a change in graduation gowns, they advocated and when the hockey team wanted to keep their season alive, they protested."

Valedictorian Evan Tsioropolous offered many thanks to school administrators and staff and went on to say this year's class had an unforgettable high school experience.

"If ever there was a time to give up, it was the spring of 2020," Tsioropolous said. "During that period we were kept from many of the people and groups that pushed us forward."

Tsioropolous added that in the face of many challenges, many immense barriers were overcome to create an environment of success.

"Throughout the last four years, the class of 2021 has refined what 'Hillie nation' and 'Hillie pride' means," he said. "In a year when less than half the school would be present on a particular day, we proved, now and forever, that school pride is more than what you wear during Spirit Week. Throughout our four years here, we've proven to be the class of resilience and inspiration and, as your name is called today, I hope you can each look back on your time here and celebrate."

Haverhill Mayor James Fiorentini offered his own sentiments aimed at the class of 2021, a group of students he said went through an incredibly difficult and challenging year.

And he remembered Logan Todd, a member of "Hillie Nation" who died in January. The mayor presented Todd's family with an honorary diploma.

"This pandemic hit our nation and our community hard," Fiorentini said. "We saw families devastated. We saw thousands of people out of work, some out of hope and unemployment levels we have not seen since the Great Depression. And for 105 families, it was the ultimate, as they lost a family member.”

Students struggled too, the mayor said, but the community came together, stood together and got through the crisis together. About half of Haverhill is now fully vaccinated.

Haverhill High Principal Glenn Burns, also celebrating his birthday Friday, told graduates they have the power to make a difference, quoting John F. Kennedy's "Things don't happen, they are made to happen."

"Recall this as you go forward onto your next journey," Burns said. "Continue to be bold and engage with your community and always work to create that environment that humanity deserves."