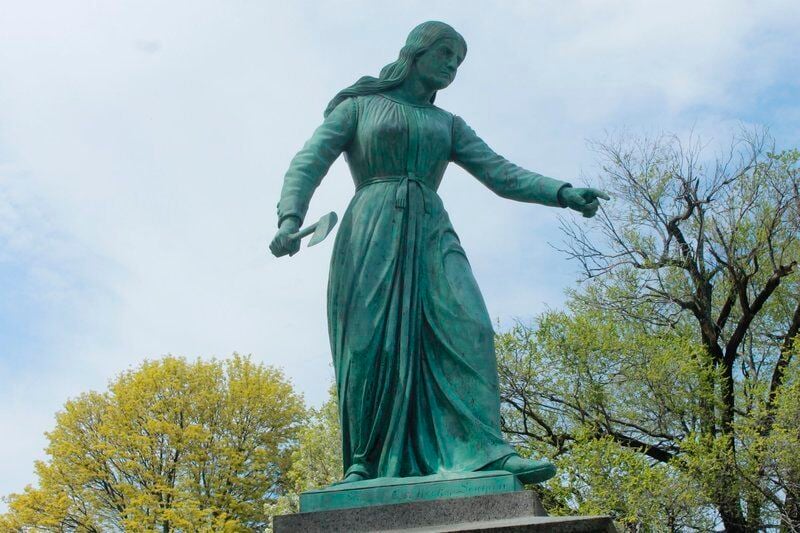 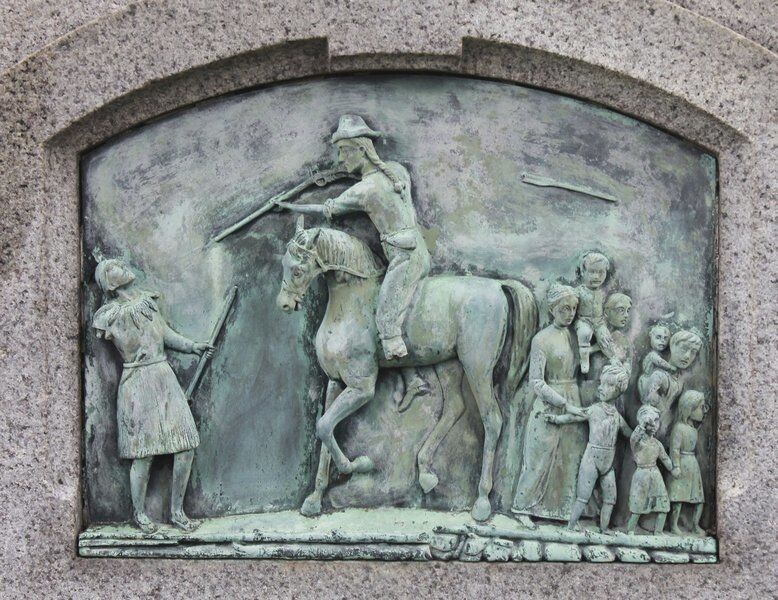 MIKE LABELLA/Staff photoThis plaque on the granite base of the Hannah Duston statue in Haverhill's GAR Park depicts Hannah's husband, Thomas Duston, firing his rifle at a Native American, while his children cower in fear behind his horse. The inscription below the plaque reads: "Her husband's defense of their children against the pursuing savages."

MIKE LABELLA/Staff photoThis plaque on the granite base of the Hannah Duston statue in Haverhill's GAR Park depicts Hannah's husband, Thomas Duston, firing his rifle at a Native American, while his children cower in fear behind his horse. The inscription below the plaque reads: "Her husband's defense of their children against the pursuing savages."

HAVERHILL — History and modern concerns over racism and violence have found a way to coexist as Haverhill debates the future of the Hannah Duston statue.

As historians and human rights activists argue the future of the statue — and whether it should remain in its prominent location in GAR Park — city leaders have decided against moving it.

Haverhill is planning changes to the statue, however, including removing a plaque referring to Native Americans as “savages’’ and taking the hatchet out of Hannah’s hand.

The City Council voted unanimously this week to leave the statue in the park, but to remove the hatchet and any words inscribed in the statue’s granite base that are considered offensive. Councilors also voted to provide space in the park for Native Americans to erect their own monument so they can share their history. Mayor James Fiorentini said he supports the council’s decision.

The statue, which has stood in GAR Park near City Hall for generations, depicts Hannah Duston, a Colonial woman who, according to historical accounts, was kidnapped by Native American Abenaki people in 1697 during a raid on Haverhill and later escaped by killing many of them as they slept.

The statue shows her holding a hatchet in her right hand. The four sides of the statue’s granite base tells her story, with accompanying bronze plaques featuring images of her capture and escape. An inscription under one of the plaques reads, “Her husband’s defense of their children against the pursuing savages.” The plaque above the inscription bears the image of Hannah’s husband, Thomas Duston, on a horse and firing his rifle at a Native American while his children cower in fear behind the horse.

As part of the City Council decision this week, councilors also voted to ask the mayor to spend money needed to alter the statue.

Fiorentini said the city will pay for the project, but he did not specify where the money will come from. He said he will also honor to the council’s wish to have the Native American story told in some way.

“We owe so much to our Native American forebearers,” Fiorentini said. “Their side (of the story) and their struggles must never be forgotten.”

Fiorentini said he also supports removing or rewording the inscription on the statue’s granite base that refers to Native Americans as “savages.” He said that kind of language is “inappropriate in this day and age.”

“I also agree with the council that the statue should be modified to remove the hatchet from her hand,” he said.

Fiorentini said he has created a Native American Commemoration Commission to determine the best way to honor Native Americans and make certain their story is told. He chose people with close ties to Haverhill to be members of the commission.

At this week’s council meeting, Councilor Thomas Sullivan recapped two public meetings held last November, during which city officials and the public offered opinions on two options for the statue: keeping it in GAR Park near City Hall or moving it to a less conspicuous location.

Sullivan asked the council to approve the recommendation from the Natural Resources and Public Property Subcommittee that he heads to keep the statue in GAR Park. He also asked the council to give members of the Abenaki Nation an opportunity to erect their own monument in the park, with space and site preparation work to be provided by the city.

Sullivan said the city’s Historical Commission took the opposite view and recommended moving the statue elsewhere, such as to the Buttonwoods Museum or the historic Duston Garrison House on Hilldale Avenue, but representatives of those organizations have indicated they do not want the statue because of concerns it may attract vandalism.

“Nobody wants her (the statue) and we have land in GAR Park to create a meaningful Native American memorial,” said Sullivan, who suggested the city consider decorating the concrete band stand at the southwest corner of the park to make it a mural honoring Native Americans. “Why not take that unattractive space and make it into something remarkable, something transformational ... that would be a fitting tribute to Native Americans.”

Councilor Michael McGonagle said he supports leaving the statue in GAR Park and removing any offensive language and the hatchet, but that he was “not supporting white supremacy.”

McGonagle referred to the minutes of an Oct. 7 meeting of Sullivan’s subcommittee and the Historical Commission, in which resident Ben Roy referring to the statue as a “symbol of white supremacy.’’ Roy also said the City Council “endorses white supremacy’’ if it fails to support removing the statue from public property.

“I don’t think there was any need for that,” McGonagle said of Roy’s comments, adding the words were “just spreading hate.”

“I think the hatchet is especially offensive to people,” she said. “It doesn’t speak to the woman herself, and I’m saying that as a mother ... I would not want to be defined by the hatchet.”

The council also decided to add a QR code to the statue so visitors can access information about the times Hannah Duston lived in. The code will allow visitors to point their cell phones at the statue and receive the information electronically.