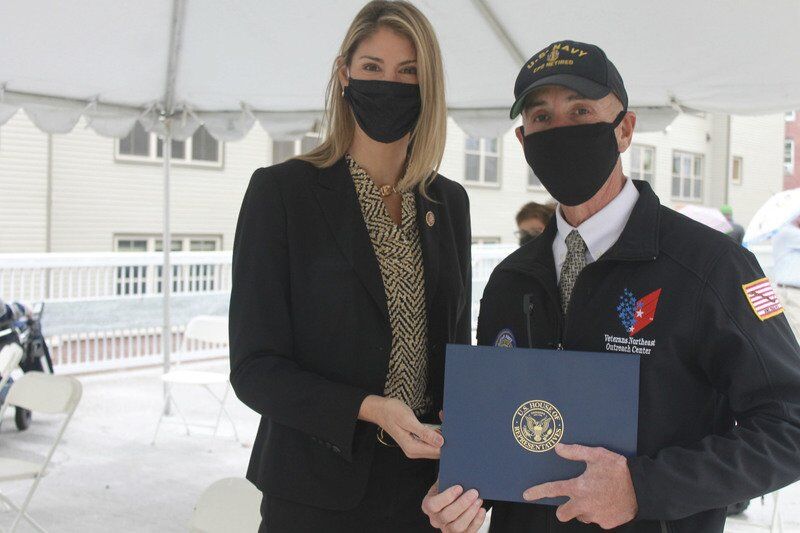 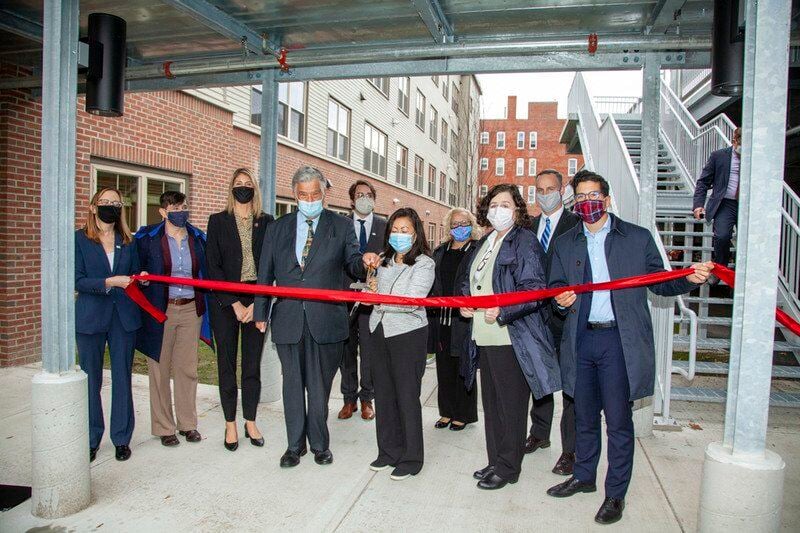 Photo courtesy of Meg Moore of MegPix PhotographyTaking part in a ribbon-cutting event for the new Gerson Building are, from left, Kerry Regan Jenness and Claire Ricker of the Coalition for a Better Acre; Congresswoman Lori Trahan; Mayor James Fiorentini; Thomas Emery and Yun-Ju Choi of the Coalition for a Better Acre; Nancy McCafferty of the Massachusetts Housing Partnership; city councilors Melinda Barrett and Tim Jordan; and state Rep. Andy Vargas.

Photo courtesy of Meg Moore of MegPix PhotographyTaking part in a ribbon-cutting event for the new Gerson Building are, from left, Kerry Regan Jenness and Claire Ricker of the Coalition for a Better Acre; Congresswoman Lori Trahan; Mayor James Fiorentini; Thomas Emery and Yun-Ju Choi of the Coalition for a Better Acre; Nancy McCafferty of the Massachusetts Housing Partnership; city councilors Melinda Barrett and Tim Jordan; and state Rep. Andy Vargas.

HAVERHILL — The city is continuing partnering in the development of affordable housing for area veterans and their families with the official opening of the Gerson Building.

The new complex consisting of 44 units, mostly for veterans, was built on the site where Gerson Furniture company operated for decades —181 Washington St., just outside Railroad Square at the western entrance to downtown.

Officials gathered for a ribbon-cutting ceremony the day after Veterans Day to celebrate the project, a partnership between the Lowell-based Coalition for a Better Acre, the city of Haverhill and the Veterans Northeast Outreach organization of Haverhill.

Officials said that at least 70 percent of the units have been set aside for low- to moderate-income military veterans and their families.

A lottery held during the summer determined who would get the new one-, two- and three-bedroom apartments. In response, the city received 11 applications for every available unit, all of which are now taken, officials said.

"Housing, health care and transportation are the three biggest needs of veterans at this time," Santiago said. "These new units will help many veterans who are suffering hardship and financial crisis and will allow them to live in a (home) they can afford as the rents (elsewhere in the city) are so high."

The mayor said Haverhill is one of many public and private financial partners who helped make the complex happen. He pointed out that the city first sought to transform the site into veterans housing in 2015 and worked on that effort closely with the late John Ratka, longtime director of the Veterans Northeast Outreach Center.

"We've done more and sometimes much more for housing for veterans that any other local community," Fiorentini said during his address. "We're on our way to meeting the goal that I set sometime ago that there should never be a homeless veteran in Haverhill."

Trahan said veterans and their families sacrifice a great deal when they volunteer to serve the nation, and they deserve to have a nice place to live that they can afford.

"We have to step up and fight for them as they so valiantly fought for us," Trahan said.

Vargas gave credit to Veterans Northeast Outreach for creating veterans housing in Haverhill, and then announced some good news for that organization.

"Despite the deficit we are facing at the state level, the Haverhill (legislative) delegation was able to secure a $50,000 earmark, thanks to the leadership of (state Rep.) Linda Dean Campbell (D-Methuen) for VNEOC to continue doing they work they are doing here," he said of Veterans Northeast.

The Coalition for a Better Acre is a community development corporation based in Lowell that pairs resident empowerment with neighborhood revitalization to build strong, safe communities and help families build better lives for themselves and the next generation.

The new Gerson Building is the latest in a series of housing complexes built in or near downtown during the last two decades. Several of the complexes are in old shoe factories that were vacant for decades. Those projects, plus the addition of a variety of restaurants and other businesses, have revitalized the economy and social scene in the city center.