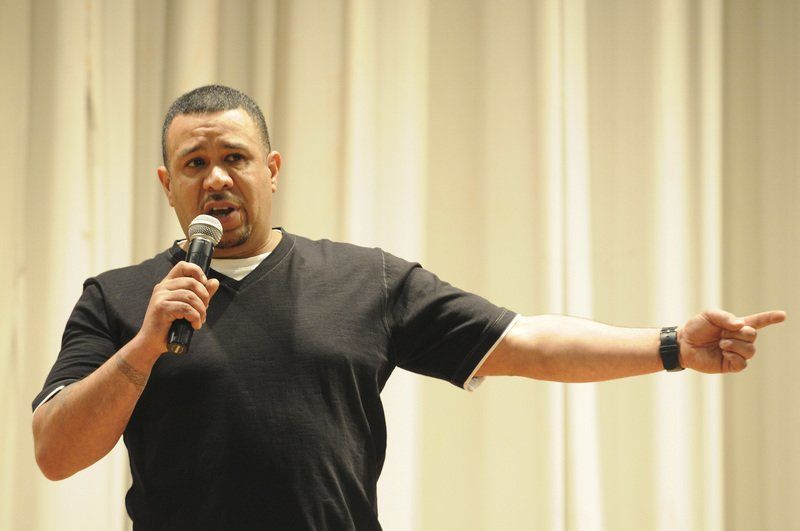 Former Lawrence gang member Antonio Santiago, who spent several years in federal prison, talks about his life on the streets during a program at Haverhill High School. 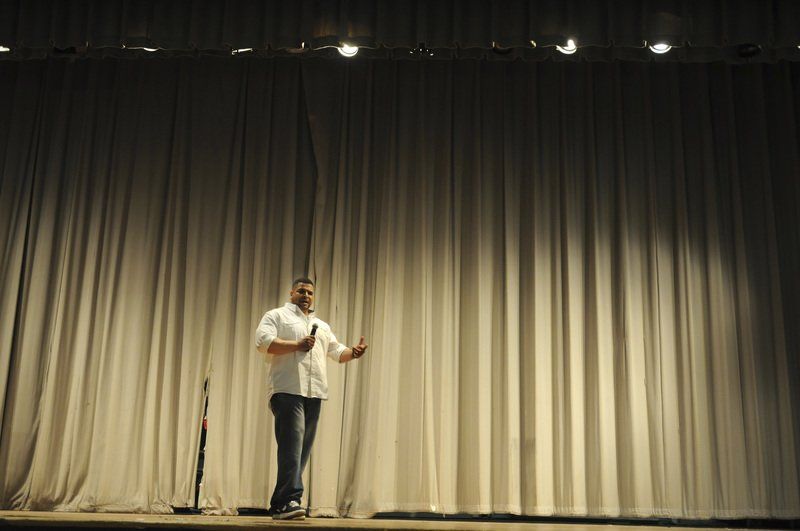 PAUL BILODEAU/Staff photoFormer Lawrence drug dealer Jose Duran, who spent several years in federal prison, talks about his life on the streets during a program at Haverhill High Monday. 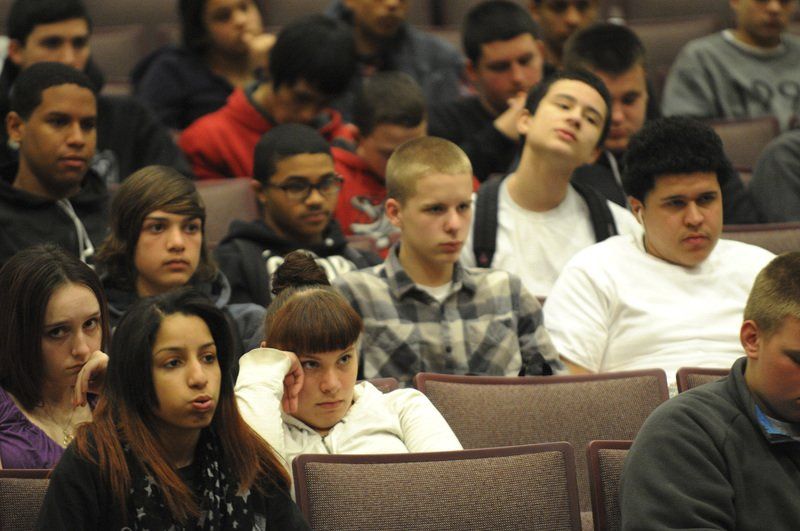 PAUL BILODEAU/Staff photoStudents at Haverhill High School listen to two former inmates talk about their lives on the streets.

Former Lawrence gang member Antonio Santiago, who spent several years in federal prison, talks about his life on the streets during a program at Haverhill High School.

PAUL BILODEAU/Staff photoFormer Lawrence drug dealer Jose Duran, who spent several years in federal prison, talks about his life on the streets during a program at Haverhill High Monday.

PAUL BILODEAU/Staff photoStudents at Haverhill High School listen to two former inmates talk about their lives on the streets.

HAVERHILL — Stepping onstage wearing black Adidas shell-toes matching his shirt and the aged ink on his forearms, Antonio Santiago took the microphone to share the sort of knowledge a man learns only after making mistakes with 120 of Haverhill High School's most at-risk students .

Together with friend and fellow Lawrence native Jose Duran, Santiago founded The TEAM (Teach, Encourage And Motivate), an initiative bent on keeping kids from getting involved with gangs and drugs, the activities that locked the men in the same Pennsylvania prison cell years ago.

Once known as "pinch" and the leader of the Lawrence street organization Latin Gangsta Disciples, Santiago shares a story that runs against the traditional gangsta grain, one of being born to a stable family, dreaming of playing pro baseball.

But after getting his then-girlfriend pregnant, Santiago turned to drinking, smoking marijuana and loitering in the streets.

"I started hanging with the wrong crowd, hustling on the block, quit my job and formed a gang with the older block crew," Santiago said in the Haverhill High School auditorium. "If I only knew then what I know now."

After getting stabbed at a neighborhood party and igniting a gang war in Lawrence, Santiago and 14 of his fellow Disciples were arrested by the FBI thanks to a snitch, who Santiago credits today with saving his life.

"Every Jesus needs a Judas," he told the students, adding that he might be dead today had he not been arrested then.

The 11 years Santiago spent in a federal penitentiary drove his father to alcoholism, his mother to depression and, in his own words, destroyed his family.

"There is nothing positive that can come from being in a gang," said Santiago, who today works as a construction worker.

Santiago stressed what he called the "five P's" he learned on the street: "proper preparation prevents poor performance." It's a mantra he hopes now can help steer kids away from lives of crime.

"When I'm freezing on a site in the winter, I think of how I could be in a warm office with a secretary bringing me coffee ... if I'd stayed in school," he said. "Always remember that a goal without a plan is just a wish. These are the times that prep you for your future."

A recovering drug addict and dealer, Duran regaled the audience with stories of his adolescent battles with narcotics.

"I started with cocaine and I'll never forget that numb feeling," said Duran. He began dealing cocaine at 15, which began a progression of abuse that ended with heroin by age 21.

"I was feeling miserable, but I continued using, because that's what addicts do," said Duran, a tall, barrel-chested man who stands in stark contrast to the skeletal image generally associated with heroin addiction.

Duran spoke of the "hot corners" where crime occurs, of "unhealthy contracts" — the friends who have your back until you're in handcuffs, and the shame of earning his GED in prison, while his supposedly "lame" family members who kept their noses clean attended college.

Duran expressed remorse he didn't enter a residential drug treatment program in prison until he was 18 months away from completing 15 years of what was initially an almost 22 year sentence.

"I wished I had let go of being a convict much sooner," he wrote.

He now attends counseling and Narcotics Anonymous meetings, has a family and a job, and says he's "at his happiest stage of life."

He told the audience that they're in the right place: school.

"It went really good. Kids get nervous sometimes talking about things that are actually happening in their lives," said Polanco, also a Lawrence native. "They made the effort to come here and if we can plant the seed with some of these kids, it's good. This is our life's work."

Asked how many of his fellow students in the room will graduate, sophomore Edward Gonzales said 80 percent.

"It was a lesson on how to act, to go to school and do your work," said Gonzales of the program's message.

The TEAM's stories hit especially close to home for some of the students in attendance.

"I connected when they spoke about gangs," said junior Valeria Zuniga. "I'm not affiliated but I know people who are and like (Santiago) said, 'the devil is always lurking' when it comes to gangs."

Junior Natasha Santana is one of the audience members involved with the school's chapter of Violence Intervention Prevention (VIP) and, though optimistic, has doubts the program reached more than 10 percent of the audience.

"A lot of kids are starting out (with crime) in middle school, so when they get here, they feel they have to roll with their guys," she said. "I have family members in jail and if they'd heard (a speech) like this, it might have prevented their situation."

After the bell rang dismissing the audience, Duran said the feedback he received told him his message got across.

"They seemed to know what they have to do. A few kids confessed to me that they're doing drugs and they have to stop," he said, adding The TEAM has been speaking with students and community groups for several months and are expanding to bigger area venues.

Footage of the group's speaking engagements can be seen on Jose Duran's YouTube Channel.

Santiago said he agreed with Santana's assessment that students should be exposed to these sorts of programs even earlier than high school.

"It should be done in the fifth-, sixth-grade. Once you're in the high school grades, it's tough to unplant that seed. But we're just thankful for the opportunity to speak," he said. "If we got one kid's attention, we've done our job."