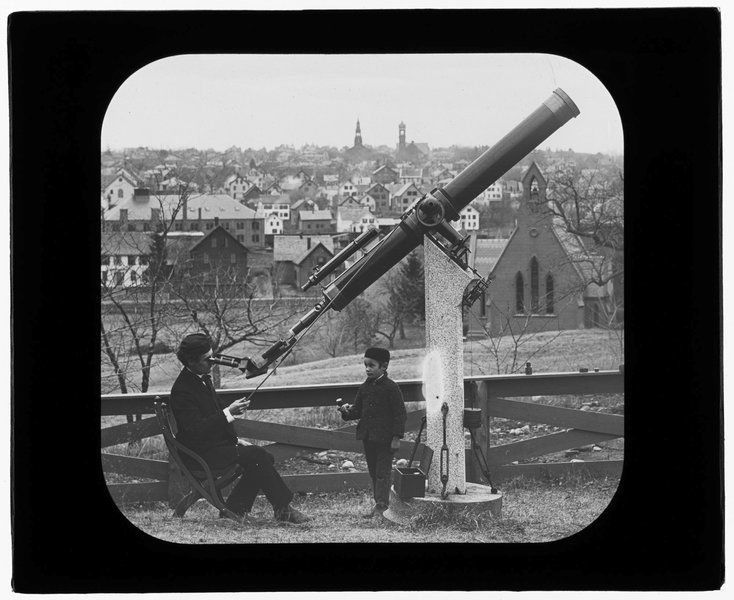 Photo courtesy of Haverhill Public Library Special Collections. Clarence Erskine Kelley and son, with telescope at Wingate Estate, Broadway. Kelley is on the left, looking through the eyepiece of a large telescope pointed at the sky. It is daylight. His young son (name not given) is standing on the right, holding what may be a separate eyepiece. 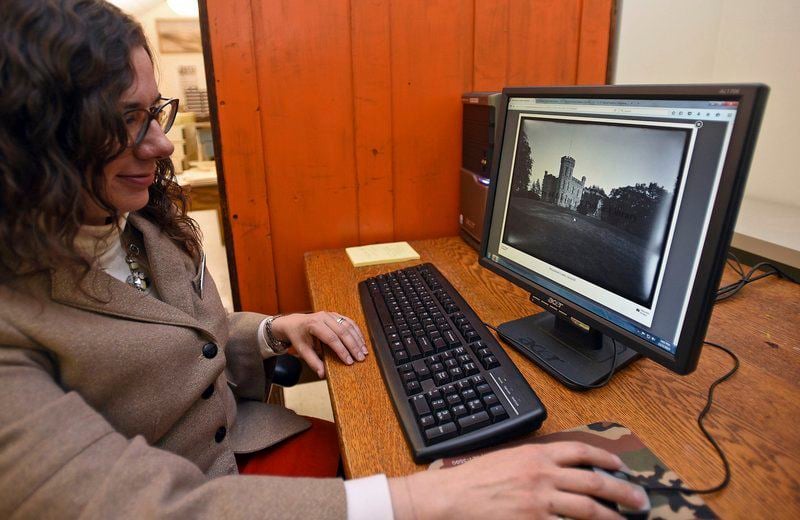 Photo courtesy of Haverhill Public Library Special Collections. Clarence Erskine Kelley and son, with telescope at Wingate Estate, Broadway. Kelley is on the left, looking through the eyepiece of a large telescope pointed at the sky. It is daylight. His young son (name not given) is standing on the right, holding what may be a separate eyepiece.

HAVERHILL — It is impossible to know what Clarence Erskine Kelley was looking at through the eyepiece of a large telescope at a place called Wingate Estate on Broadway.

After all, the photograph of him seated at a telescope that is pointing skyward as his young son looks on appeared to have been taken in daylight, which is not an optimal time for stargazing. Then again, he could have been looking at the moon, which is sometimes visible during the day.

The photograph, taken sometime between 1880 and 1890, included some valuable information.

The photograph, which is now available online through the public library's Senter Digital Archive, shows a view from Pecker's Hill, with St. John the Evangelist Church in the background.

Kelley's photograph is one of more than 11,000 photographs that are now online, up from 4,000 since the library launched the archive's website in late June of 2018.

Dana Gee, the project's cataloger, is currently sorting through library's collection of 19th- and 20th-century prints and that once she has completed the task those images will also be made available online.

"There are images being made available every week as I'm putting them online as we go," she said.

Gee said the project began with cataloging 19th and 20 century negatives that are in the collection.

"A vendor reversed the images to create positives, which we then made available online for viewing," she said.

The online images have watermarks, but can be requested without watermarks, at no cost for personal use, although there is a charge for commercial use.

Gee said that as images are added to the archive website, any clarifying information regarding those images is being added as well.

Members of the public are encouraged to contact the library with information about images they see on the archive website and which the library can use to better describe these images.

Gee said that since launching the Senter Digital Archive website, many library patrons have been requesting digital files of the available images, which they can then print out, or have printed out, for their own collection or to share with friends or family.

She said that some of the more popular requests are for houses, people and streets of the 19th century in particular.

For an example of the kinds of images people have been requesting, you can visit the website and click on the "random images" link.

The images range in date from the 1850s to the late 20th century and include studio portraits, press photographs, and work by local photographers.

Negatives are displayed as positives and the subjects include Haverhill and area architecture, businesses, people, schools, churches, manufacturing, engineering, historical documents, neighborhoods, maps, monuments, the library itself, and more.

Gee said the project, when completed, will result in a total of about 50,000 images that will be available online.

The library's Special Collections Department is open Wednesdays and Thursdays from 10 a.m. to noon and from 1 to 3 p.m.

Members of the public are invited to drop by to conduct genealogy research and to review items in the library's vast collection of images, books, maps, and other historical documents.

The Senter Digital Archive is available for viewing and ordering at haverhill.pastperfectonline.com.