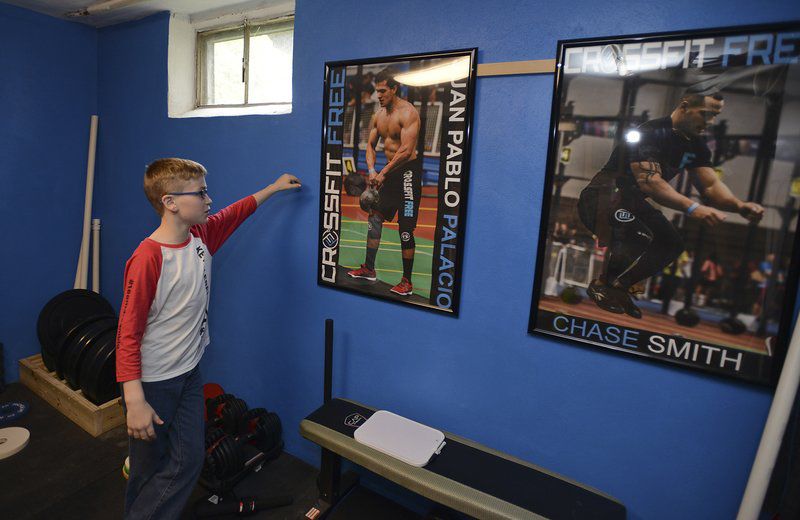 RYAN HUTTON/Staff photo Shiloh Ellis points out the posters he has in his home gym of his Crossfit trainer Chase Smith and Crossfit friend Juan Pablio Palacio. 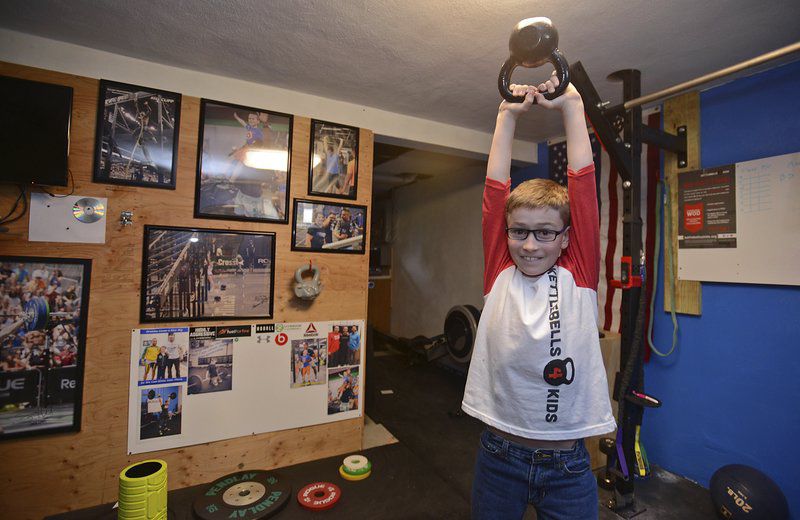 RYAN HUTTON/Staff photoShiloh Ellis, 10, hoists a kettle bell over his head in his home gym. 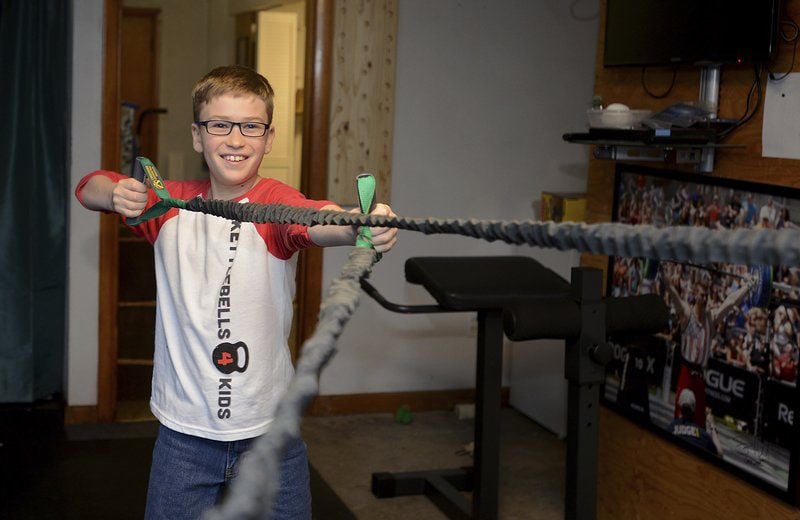 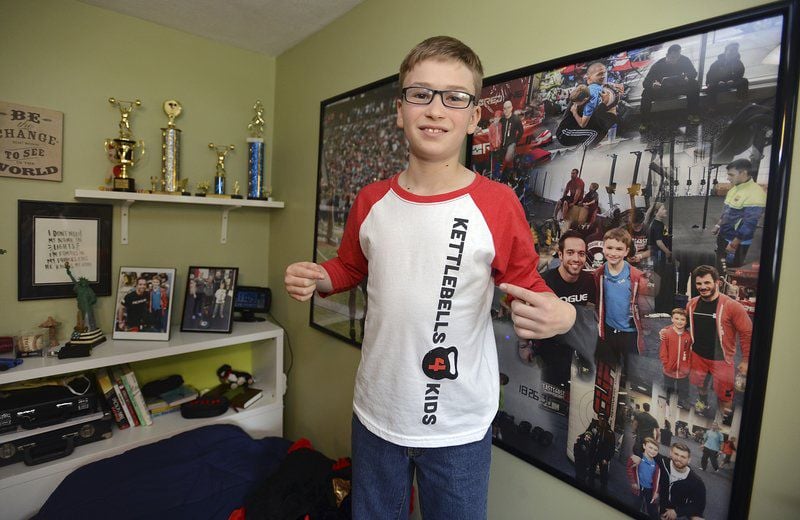 RYAN HUTTON/Staff photoSurrounded by Crossfit memorabilia in his room, Shiloh Ellis points to his Kettlebells4kids shirt. 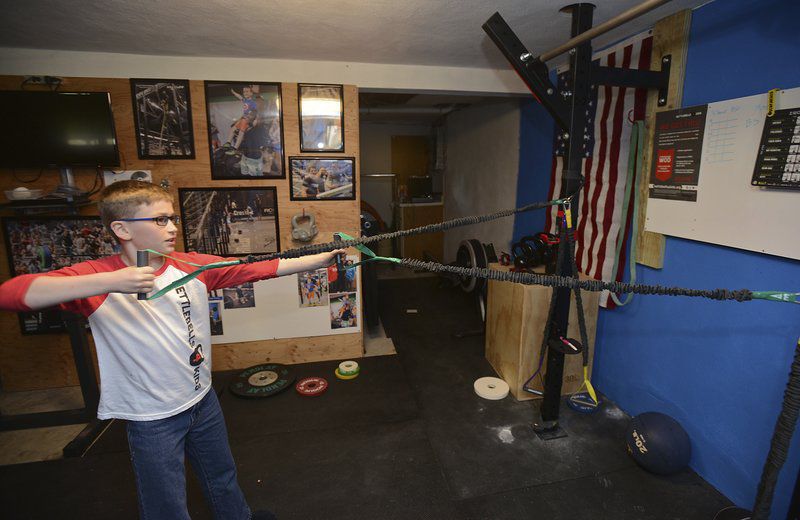 RYAN HUTTON/Staff photo Shiloh Ellis points out the posters he has in his home gym of his Crossfit trainer Chase Smith and Crossfit friend Juan Pablio Palacio.

RYAN HUTTON/Staff photoShiloh Ellis, 10, hoists a kettle bell over his head in his home gym.

RYAN HUTTON/Staff photoSurrounded by Crossfit memorabilia in his room, Shiloh Ellis points to his Kettlebells4kids shirt.

HAVERHILL — Shiloh Ellis has a passion for lifting, whether it's a 100-pound barbell or helping others who face difficult circumstances.

A fourth-grader at Sacred Hearts School in Bradford, Shiloh has been participating in workouts at a local CrossFit gym in Salem, N.H., pushing the limits of his 4-foot, 4-inch, 72-pound frame several times a week. He also lifts weights in his basement.

But while the 10-year-old Groveland boy's physical abilities are remarkable on their own, the strength of his heart is more impressive.

For the past two years, Shiloh has been on a crusade, raising more than $10,000 for Kettlebells4kids, a Foxborough-based organization which seeks to educate the public about the issue of childhood homelessness that affects 2.5 million children nationwide.

Through the power of social media, Shiloh formed Team Dream Big last year and has rounded up a squad of more than a dozen like-minded kids from California, Connecticut, Florida, Iowa, Louisiana, Oregon, Pennsylvania and South Carolina to help less fortunate children.

"It was last year about this time. I was at east regionals and they (Kettlebells4kids) had a booth. I saw that the average age of a homeless person in the United States is 9 years old ... which was how old I was," Shiloh said. "There are 31,000 homeless kids in Massachusetts. That hit me, and I decided to get involved."

Shiloh's father Robb Ellis said his son emailed the organization's founder, Amie Owens, to see what he could to help provide exercise equipment for homeless shelters around the country.

"No one thinks of a child when they hear the word 'homeless.' They think of a 45-year-old man with an addiction," Owens said. "We wouldn't be where we are today without (Shiloh). You meet him and you're immediately drawn to him. His character is top notch."

What started initially with Shiloh asking the owners of local CrossFit gyms if he could give a presentation to gym members about donating even a few dollars eventually led to visiting boardrooms and addressing companies to explain Kettlebells4kids' mission, asking for their help.

"It was unique in the way he was doing it," his dad said. "It's hard to say no to kids, especially when what they're asking for is help helping kids. Most people, when he tells them (the homeless statistics), they're in disbelief."

Shiloh and his family have traveled all over the country not only to compete in Junior CrossFit events and weightlifting competitions — he placed second in the junior weightlifting Olympics in Minnesota last year — but also to visit gyms around the country to solicit donations.

"We went to Iowa and visited 12 gyms in two days," his father said. "In February, we went to Georgia and went to 18 (gyms) around Atlanta."

Despite being three months removed from his 10th birthday, Shiloh is a folk hero in the Crossfit community, with more than 2,100 followers on his InstaGram page, and having rubbed shoulders with Crossfit icons like Rich Froning, four-time winner of the CrossFit Games who was dubbed "The Fittest Man on Earth" by Men's Fitness Magazine.

"Everywhere he goes, people know him. We went to a gym in Cookeville, Tennessee, in the middle of nowhere, and two people knew him," Robb Ellis said. "We'll go to a local diner and people will say 'Hi Shiloh' and then say to me 'Hi, Shiloh's dad.'"

For his efforts, Shiloh has been recognized by Groveland selectmen with an Outstanding Fundraising Award. He has appeared on TV's New England Cable News promoting his cause.

The youngest of three boys, Shiloh has grown up in a home where helping less fortunate people has been a way of life. His older brother, Troy, has held coat drives and put together bags for the homeless as part of his Eagle Scout project.

While every mother believes her child is unique, Shiloh's mom, Kristen, said her youngest really is one of a kind.

"For Christmas, he took the money he got from his grandparents, went to Old Navy and bought hats, mittens and scarves on sale. I don't even remember how many he bought," she said. "We haven't met a child quite like him."

In addition to doing CrossFit and lifting weights in his basement, Shiloh also plays baseball and does jiu-jitsu, a form of martial arts. Later this year, he will travel to Austin, Texas, to compete in CrossFit Youth Nationals — where he will also operate the Kettlebells4kids booth.

Owens said she plans to bring the organization to CrossFit and Ironman competitions, as well as Fitness on the Rocks in Colorado this summer. She said her goal is to raise $500,000 in 2016 and to receive donations from at least one gym in all 50 states.

"The fitness community knows the power of exercise and activity, which is one thing this population needs," she said, adding the structure of CrossFit has timed exercises as athletes pursue personal bests in time and weight. "It's the only sport where the loudest cheers are for the last one to finish. The things I hear personally at CrossFit, they're things homeless parents need to hear — 'you got this,' 'don't give up.'"

When asked about his son's interest in helping needy people, Robb Ellis said he doesn't want to shield his children from the horrors of the world.

"People say to me 'He shouldn't know about homelessness. Why can't he just be a kid?'" he said about the importance of young people helping others. "I just say to them, 'If not him, who?'"

Owens didn't initially want to recruit young kids to help raise money, but said she has noticed a big change in kids these days regarding social justice, adding she recently received an email from a young girl in Minnesota asking to help.

"Kids who are under 16, they want to help. They have helping people on their mind," she said. "If we can build healthier, more confident kids, our communities will be healthier and more confident, too."