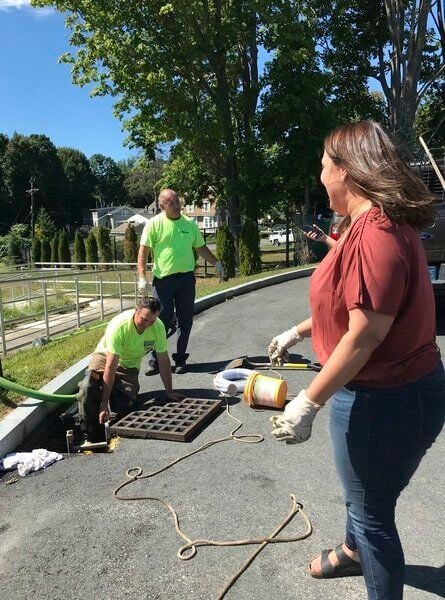 Courtesy photoDepartment of Public Works employees open a catch basin where they used a metal detector and sifted through dirt to recover a diamond ring lost by a new Haverhill teacher. 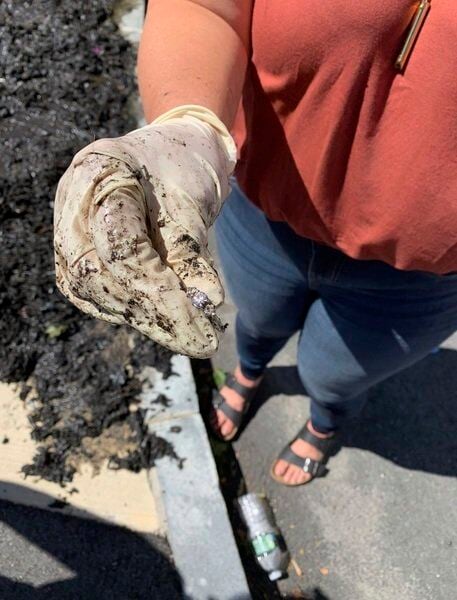 Courtesy photoDepartment of Public Works employees open a catch basin where they used a metal detector and sifted through dirt to recover a diamond ring lost by a new Haverhill teacher.

HAVERHILL — Perhaps Mr. Rogers of TV fame said it best: In times of need, look for the helpers.

That's just what a team of teachers did Wednesday when a new colleague's $20,000 diamond ring fell off her finger and disappeared during a staff orientation event at Hunking School.

Jennifer Rubera, director of remote learning for the school district, first worried it was a food allergy attack that caused commotion around the woman, who is a new seventh-grade teacher.

Rubera and other school staff members taking their lunch break outside the school quickly realized it wasn't a health issue.

"Jen heard the woman yell she had lost her ring," said Dianne Connolly, the district's director of multi-tiered systems of support. "The ring was new and she hadn't gotten it sized, and when she reached into her lunch bag to pull out her sandwich it flew off."

The new teacher was near a catch basin when she lost the ring. Once Rubera realized the woman was not ill, she jumped into action to help find her new colleague's prized possession. Rubera called employees from the city's Department of Public Works, who came to the school on South Main Street. They were armed with tools and a desire to help.

"The DPW could not have been nicer," Connolly said. "One guy was down in the storm drain and had a metal detector. It was the best community team spirit effort, which was nice, since our (staff meeting) theme was about team building."

The DPW worker found the ring in the catch basin. Connolly said the teacher recently moved to Haverhill from Vermont and had received the diamond dazzler as a 20th anniversary gift.

"This was her introduction to Haverhill and we welcomed her well," Connolly joked.

The new teacher will work at Nettle Middle School and has quite a story to tell her students when they arrive in her classroom next month. Students return to classes Sept. 16.