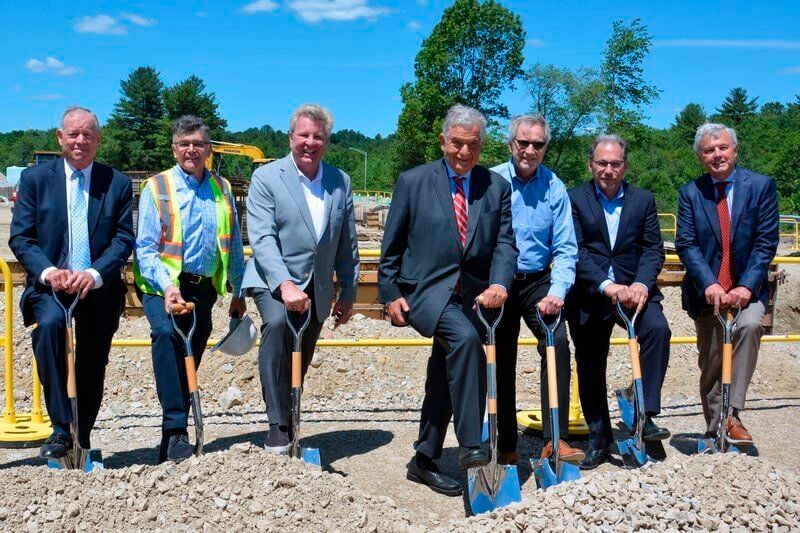 HAVERHILL — As construction begins on a new facility in the Broadway Business Park for Monogram Foods, city officials are looking ahead to three other companies that have plans to build in the park as well.

City officials say they expect these companies will bring upwards of 1,000 jobs to Haverhill.

A groundbreaking ceremony was held last week for the Tennessee-based Monogram Foods, which company officials said will launch with 250 transfer jobs plus 250 new jobs for a total of 500 within the next few years.

"It's great to see the expansion of job opportunities in Haverhill," said William Pillsbury, city economic and planning director. "These are jobs that people can take advantage of and can live in and work in Haverhill, which is one of our goals of economic development."

Monogram’s state-of-the-art facility, owned by the real estate investment group Paradigm Properties, is being designed and constructed by Dacon Corporation of Natick. The facility’s focus is making sandwiches, supported by a 109,000 square foot, multi-temperature warehouse and a 26,000 square foot product assembly area.

Monogram's products include 10 meat snack brands, with products including hot dogs, sausages, beef jerky and bacon, along with three licensed lines, most notably Butterball and Johnsonville.

He said the commercial real estate broker who arranged the deal to bring Monogram to Haverhill had very high praise for the streamlined process the city put in place several years ago for obtaining permits.

Monogram is part of a cluster of four new companies the city has recruited to the Broadway Business Park.

Pillsbury said Howland Development Company of Wilmington plans to build a 140,000-square-foot warehouse and distribution facility in the park. The Howland company has not yet identified its tenants, Pillsbury said.

Dacon Corporation also plans to construct a 121,800-square-foot building in the business park for Edwards Vacuum, a developer and manufacturer of sophisticated vacuum products, exhaust management systems and related services. Edwards Vacuum plans to open an innovation center in the summer of 2022, bringing as many as 250 jobs to Haverhill, many of them high-paid scientist and engineering positions, the mayor said.

Amazon also plans to open a 142,000-square-foot distribution center in the Broadway park as part of the e-commerce giant's "last mile" fulfillment program. Fiorentini said he expects Amazon will bring 100 or more jobs to the site, which was formerly occupied by the Southwick clothing company and before that was a Lowe's home improvement store.

Last week's groundbreaking event included the announcement of a philanthropic program that will match client donations to community projects.

Monogram and Paradigm Properties collaborated with Dacon Corporation's new "Designed with Dignity" philanthropic program to create the fund. For each city that Dacon builds a facility in, a community charity will be identified as a recipient, company officials said.

The inaugural recipient of the fund is Emmaus Inc. in Haverhill, which will use the $15,000 it received to help move 60 families move from shelters into their own homes next year.

Jeanine Murphy, CEO of Emmaus Inc., said her nonprofit is thrilled to partner with the three organizations to secure sustainable housing options for families whose lives have been impacted by homelessness and poverty.

"We've learned over the past 35 years that families need stable housing, nutritious food, access to education and employment, and a solid community support network to be successful," she said. "This $15,000 investment into our organization will go a long way toward helping families fulfill their dreams for a brighter future."