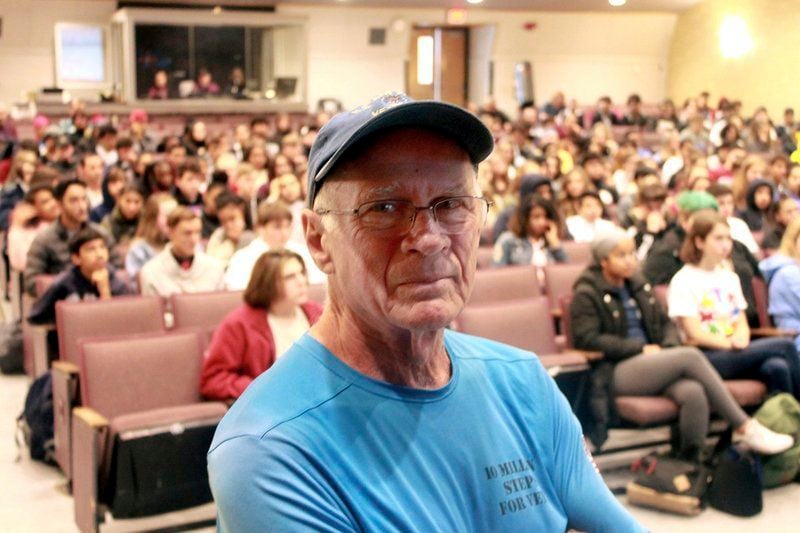 MIKE LABELLA/Staff photo. William Shuttleworth of Newburyport walked across America in support of disabled veterans and recalled his journey during a talk with history students at Haverhill High. 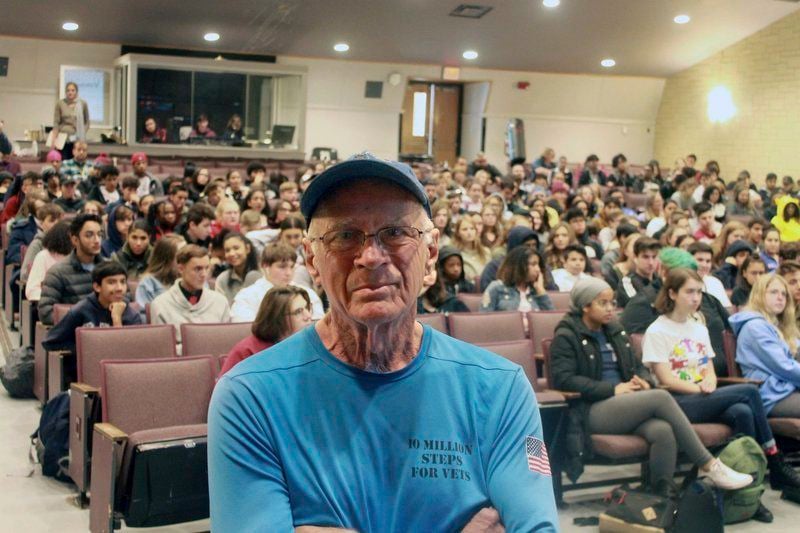 MIKE LABELLA/Staff photo. William Shuttleworth of Newburyport walked across America in support of disabled veterans and recalled his journey during a talk with history students at Haverhill High Friday.

MIKE LABELLA/Staff photo. William Shuttleworth of Newburyport walked across America in support of disabled veterans and recalled his journey during a talk with history students at Haverhill High.

MIKE LABELLA/Staff photo. William Shuttleworth of Newburyport walked across America in support of disabled veterans and recalled his journey during a talk with history students at Haverhill High Friday.

HAVERHILL — William Shuttleworth of Newburyport went on a very long walk in support of our military veterans. In fact, the Air Force veteran crossed the country on foot, racking up about 3,300 miles on his journey that ended in San Diego, California.

On Friday, the retired educator spoke to about 200 students in history classes at Haverhill High.

Shuttleworth began his 110 day coast-to-coast journey across America on May 15, which included stops at VA centers, American Legions, VFWs, coffee shops and homes of veterans he spoke to individually and in groups. He finished his walk on Sept. 1.

Haverhill High's Student Council gave him a $200 donation in support of disabled veterans.

Shuttleworth told students that he is among a small group of people who have taken on such an adventure, noting less than 50 people have trekked across America on foot, and that half of those walkers did it on relay teams.

He carried a 35-pound backpack and pitched a tent each night until reaching Pennsylvania. By then, he'd captured the attention of the national news and from then on he was invited to spend his nights in hotels and at fire houses, at no cost.

He told students that more than 25% of all homeless men are veterans, and many of these forgotten warriors struggle with employment, addiction and sobriety. These men and women have little voice in Congress, he said.

As he notes on his website, vetsdontforgetvets.com, Shuttlworth told students about his five recommendations for America's veterans.

They are to elect a veteran, at the national, state and local level; to eliminate veteran homeless by 2030; to provide free medical care for any veteran who was ever drafted and was discharged with an Honorable Discharge; to guarantee medical and mental health treatment within 30 days for all veterans, and to increase the starting pay for enlistees to a 'livable wage.'

"It is tragic that most enlistees qualify for food stamps," he told the crowd.

Shuttleworth captivated his audience with stories and a slideshow presentation highlighting the many things he saw and the many veterans he met on his journey.

He said he witnessed the construction of a home, in a single day in Illinois by 100 people, for a young, disabled veteran who literally moved in that night.

"There are 63,000 homeless veterans in America," Shuttleworth told the crowd.

While walking along a cornfield in Kansas, he encountered a veteran who was waiting for him and who told Shuttleworth how he had disposed of bombs in Iraq and that it caused him congestive heart failure. Shuttleworth said the military lost the man's records, and refused him medical treatment.

"I made several calls to veterans officers I knew, and by the time I got to San Diego two months later, he was getting services from the VA for the first time," Shuttleworth told the crowd. "That's why I walked across America."

Two veterans he met had served in World War II, the Korean War and the Vietnam War.

"They are both 96 and very seldom will you see a soldier who fought in three wars," Shuttleworth said.

In all, Shuttleworth made 10 million steps on his journey and wore out five pairs of shoes.

"Tonight when you watch the news, you'll see violence and shootings and all that stuff. But you put a pair of shoes on and you walk across the country, you'll meet the kindest, most gracious, hardworking and creative people you'll ever meet. America the beautiful, starts with your feet."

Following Shuttleworth's talk, senior Brandon Burns said he is now more aware of the many pressing issues facing veterans, from homelessness to suicide.

"These are issues that many people are not aware of," Brandon said.

History teacher Tom Jordan said the purpose of the event was to highlight the continued relevance of veterans in our society.

"Veterans don't cease to exist when the fighting stops, rather, their lives as veterans just begin," Jordan told his students. "Many go on to lead healthy, constructive lives, while others struggle."

Jordan said that in deciding to take on this monumental task of walking across the country, Shuttleworth made very clear that "veterans exist."

"They are everywhere and a country that feels it's important enough to send these young men and women into war, should have the decency to remember them and help them in the ensuing years," Jordan said. "And this is a message given to us, not by a politician, but by a 71-year-old American citizen."

While Friday's event had elements of a typical Veterans Day assembly, the invitation of Shuttleworth as the guest speaker had the bigger goal of honoring the whole concept of civic engagement, Jordan said.

Prior to Shuttleworth's talk, members of the high school's Jr. Marine ROTC program celebrated the 244th birthday of the Marines with an honor guard and a cake.