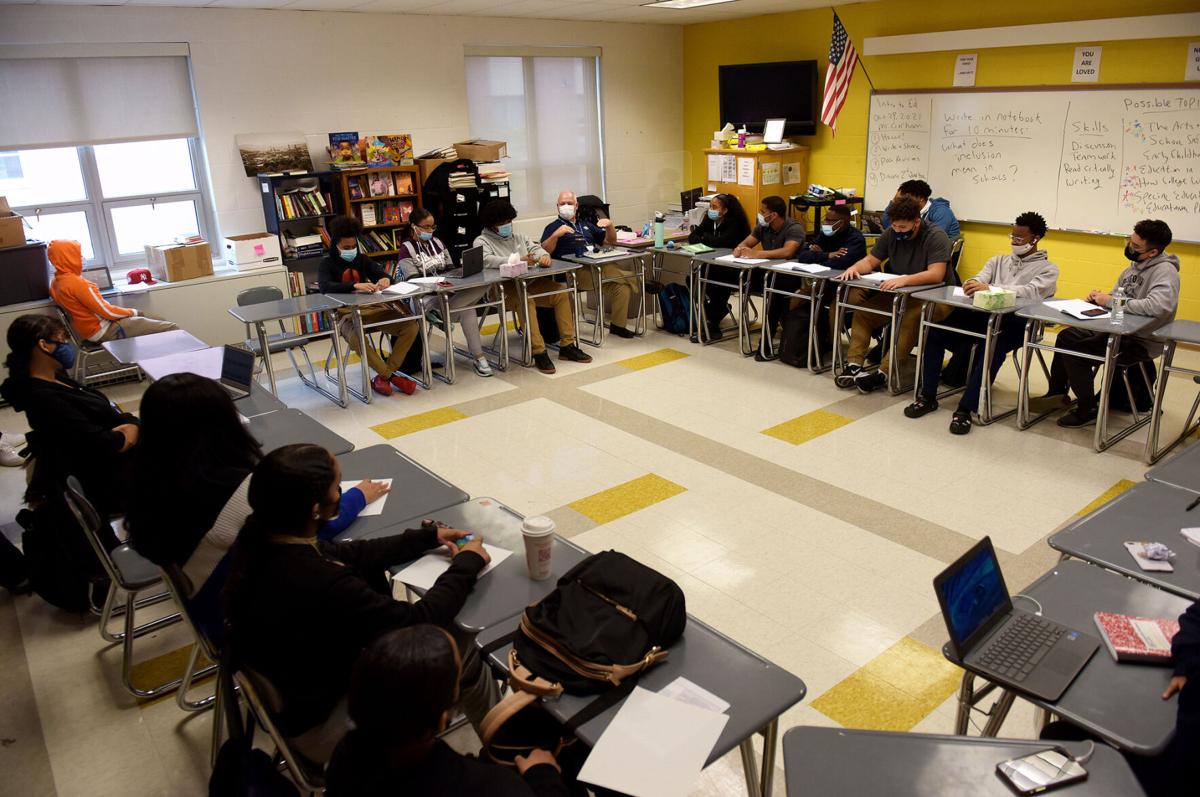 Students gather with teachers to discuss some social issues students feel are impacting them at Lawrence High School. 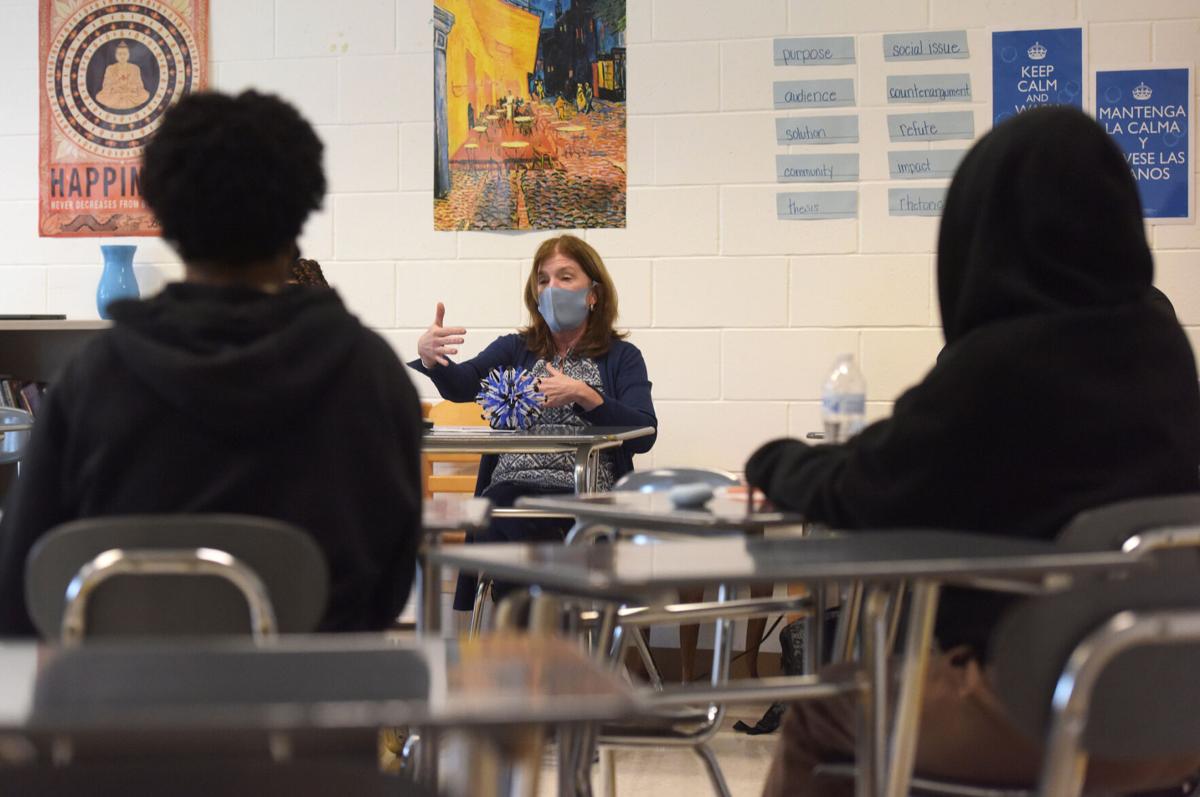 Students gather in a circle as an English teacher discusses some social issues they feel are impacting them at Lawrence High School on Friday,. 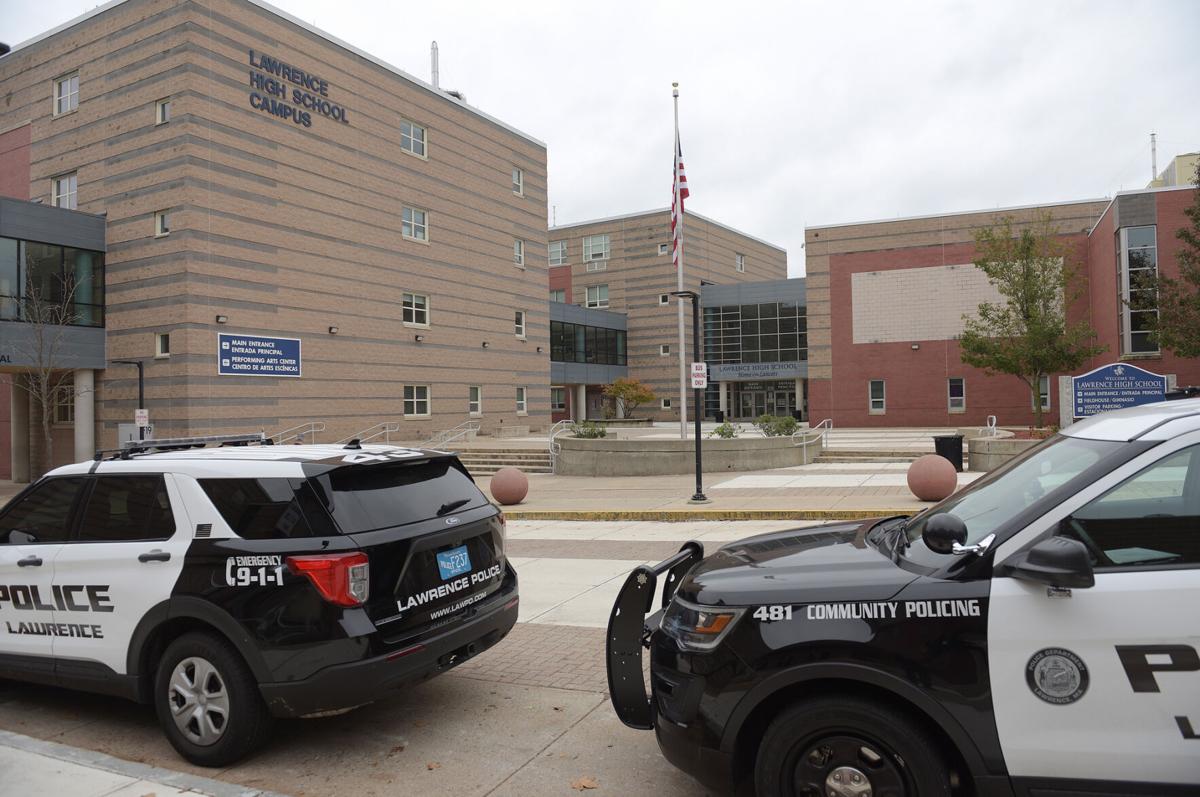 Several police vehicles sit parked outside of Lawrence High School on Friday. Police officers have had more of a presence in schools recently because fighting. 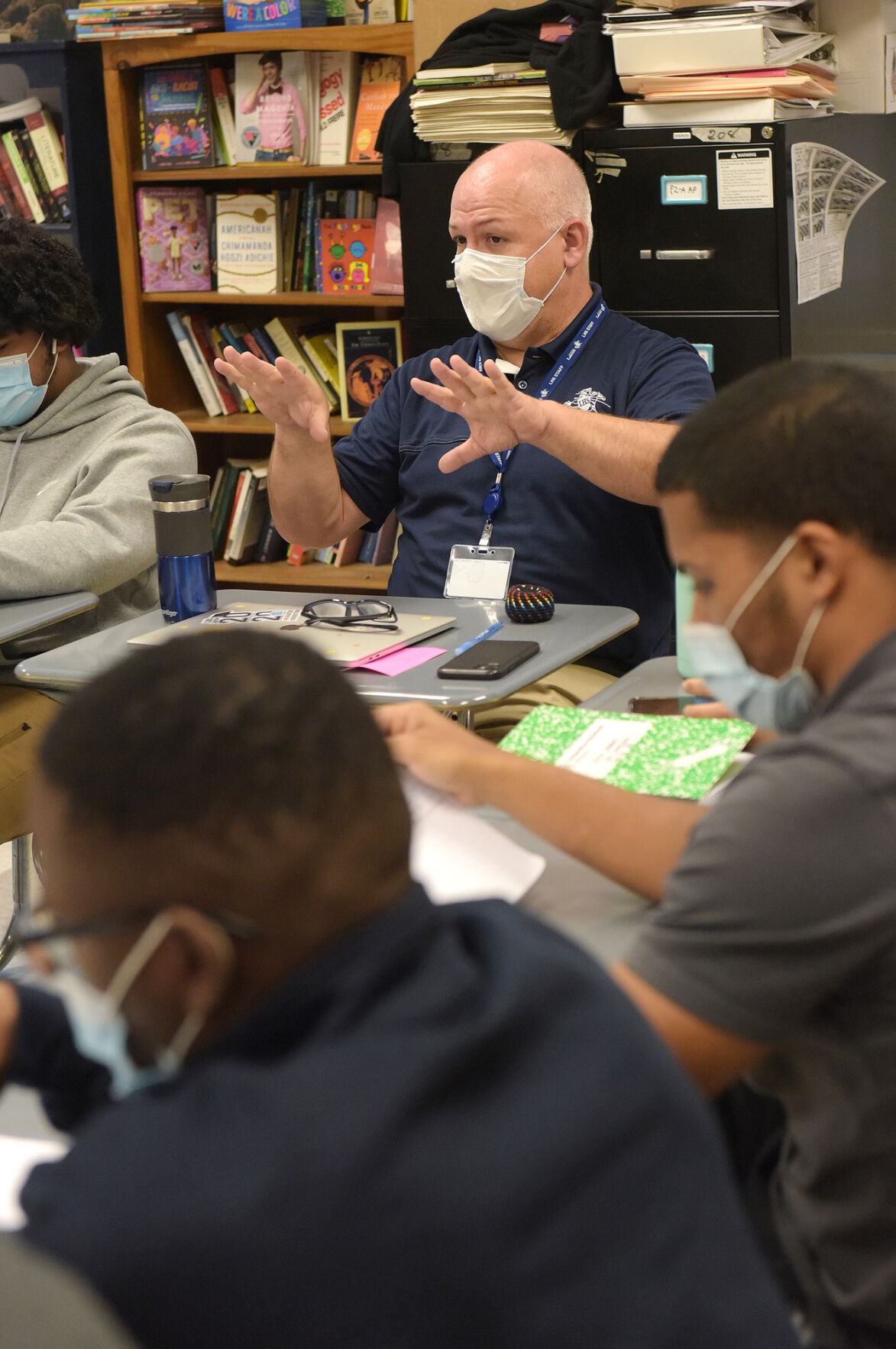 Students gather in a circle as Lawrence High School teacher Richard Gorham, center, asks them: “What does inclusion mean in schools?” 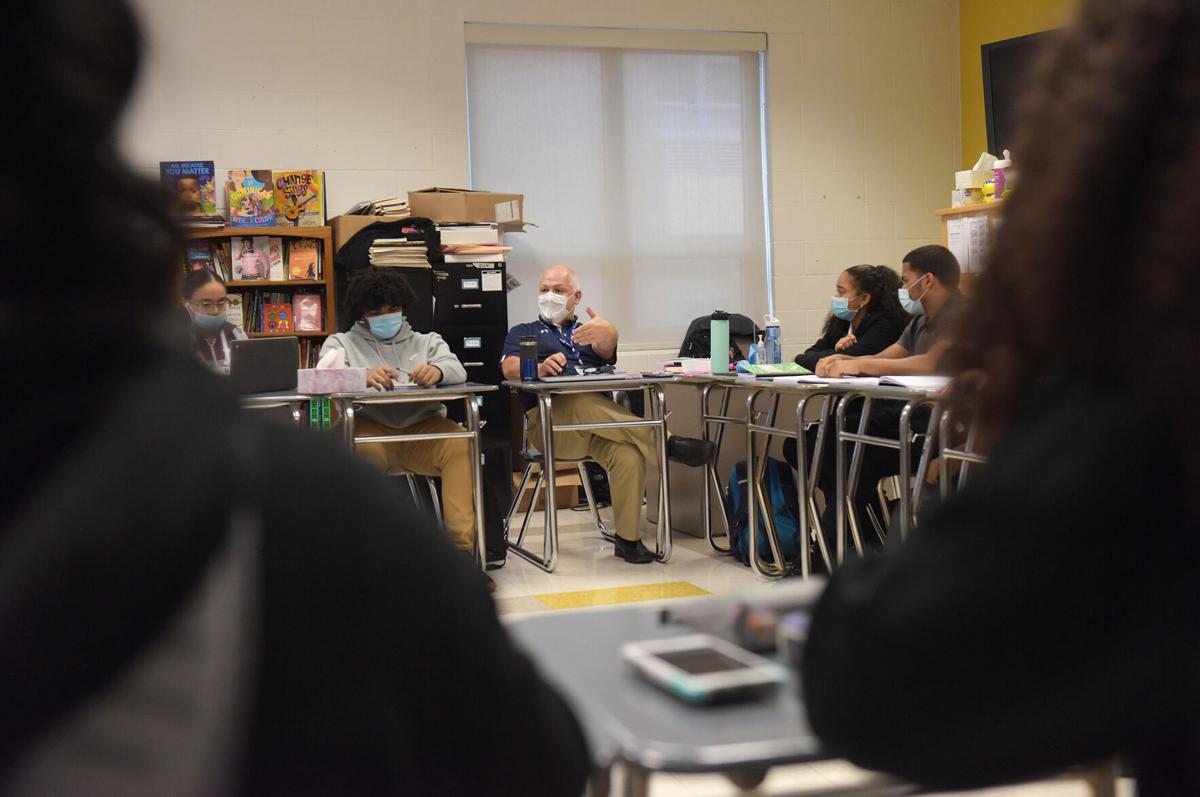 Students gather in a circle as teacher Richard Gorham, center, asks them “what does inclusion mean in schools?”

Students gather with teachers to discuss some social issues students feel are impacting them at Lawrence High School.

Students gather in a circle as an English teacher discusses some social issues they feel are impacting them at Lawrence High School on Friday,.

Several police vehicles sit parked outside of Lawrence High School on Friday. Police officers have had more of a presence in schools recently because fighting.

Students gather in a circle as Lawrence High School teacher Richard Gorham, center, asks them: “What does inclusion mean in schools?”

Students gather in a circle as teacher Richard Gorham, center, asks them “what does inclusion mean in schools?”

A Lawrence teacher was assaulted when trying to break up a fight at the high school.

A Hunking School student in Haverhill waved a hot dog around his groin sticking it in the face of a girl and saying, “I know you want to suck it,” while being cheered on by other students.

Since students returned to classrooms after more than a year of disruption and trauma caused by the COVID-19 pandemic, schools have faced growing behavioral issues ranging from disengagement in activities to physical and sexual violence. The pandemic and being away from school exacerbated issues schools were already confronting pre-pandemic. For some, schools were where students got their most consistent support systems, their only meals, medical and mental health resources and where they got much of their socialization.

Many of the behavioral issues stem from an increase in anxiety and depression, which has been on the rise for years, said Dr. David Rainen, a psychologist at Merrimack Valley Psychological Associates.

“This is the first time in our lives (collectively as a society) we’ve had to wonder if things will be OK,” Rainen said.

Anxiety typically manifests in either fight or flight responses, Ranien said, which can range from irritability and actual physical fighting to being avoidant.

Lawrence Public Schools was already dealing with the largest number of reportable acts of violence pre-pandemic, with 195 students disciplined for such violence in the 2018-2019 school year, according to state data. Now, two months into the school year, officials have reported 78 students facing discipline and there have been 26 fights at the high school, said Christopher Markuns, spokesman for Lawrence Public Schools.

Officials from Haverhill wouldn’t provide an exact number of violent incidents this year, however, fights reported at the high school have gotten the attention of parents after incidents were recorded and shared on social media.

“It is fair to say that the numbers are up this year across all of our schools and in schools across the nation,” said Haverhill Superintendent Margaret Marotta in an email.

The Department of Children and Families has also conducted two investigations into sexual harassment at Haverhill schools, including the hotdog incident, said Andrea Grossman, spokesperson for DCF.

Officials from Andover, North Andover and Methuen schools did not respond to request for comment about student disciplinary incidents.

To immediately respond to the violence, Lawrence and Haverhill have added more security guards and resource officers to the schools.

However, one former teacher who went to a rally led by students in opposition to the violence in their schools, pushed back on the idea of adding police as the best way to address mental health issues. When adding more police in schools “students assume they are in the wrong even when they are not and they feel a lot of anxiety,” said Sarah Booth, a former Lawrence teacher.

Across the Merrimack Valley, including in Lawrence and Haverhill, districts are trying to instill wellness routines that can preemptively address mental health issues before they get to a crisis point.

“If we don’t provide students with proper services, they won’t achieve the academic success they deserve. We have to invest in student well-being to make them successful,” said John Crocker, Methuen’s director of school mental health and behavioral services.

Transition years are the hardest

Despite the pandemic, Salem, New Hampshire students were in classrooms every day last year, only having some go remote occasionally for outbreaks of illness — a choice Salem officials now say they’re reaping the benefits of.

“We haven’t seen the issues other schools have, and that I believe is in part to us being here everyday. As hard as it was, it was a huge benefit to our kids,” said Tracy Collyer, assistant superintendent for academics and support.

However, the youngest students in pre-K and kindergarten — especially those who did not attend school last year — are having a harder time transitioning, she said. She explained their social skills were not at the level of pre-pandemic students because they hadn’t had much contact with peers because of the pandemic.

Similarly, the transition from middle to high school has hit Lawrence freshmen and sophomores hardest, said Markuns. They were in seventh and eighth grade, respectively, when schools went completely remote at the beginning of the school year.

In these first few months the vast majority of the recorded incidents — 93% of incidents this year — are from ninth and tenth graders, Markuns said. Both of those grades are adjusting to the high school because last year the district was fully remote until May of 2021 when state officials forced schools to offer an in-person option. However, only about 24 current tenth graders went to school in the remaining weeks of last year, Markuns said.

Despite these compounding crises, the mental health issues facing students are all treatable, Rainen said, but it will take work. There will also be more work needed in some areas over others because of pre-pandemic disparities, he said.

“The pandemic certainly highlighted the disparity of communities where, like Andover, there are more resources; those kids will likely rebound quicker,” Rainen said.

Building out supportsDistricts have each received federal funds from pandemic spending bills. Each is using some of the funds for mental health supports.

The district is also creating a Restorative Justice Center to give students who are facing in-school suspension or who need other social-emotional supports a place to go, Markuns said. The center will have a school culture specialist, counselor and social worker for students to turn to, he said.

Pre-pandemic, mental health had already been a focus for Methuen schools, implementing mental health screenings, individual and group therapy sessions to help students struggling. Crocker, who is also the founder and director of the Massachusetts School Mental Health Consortium, is working to implement those ideas across the state and also working to find new solutions, he said.

“We are open-sourced,” he said.

“Schools need to orient to the social-emotional needs of our students. Schools are in a unique position to do screenings” and get students other support, Crocker said. Explaining that the school partnering with local organizations can work in tandem to help as many people as possible.

Also, parents play a large role in mental health support. If their child is having an off day, and exhibiting any symptoms the best thing to do is ask about it, Rainen said.

“If we all play a little bit of detective with the people we love we can find out if it’s just a bad day or something more,” Rainen said.

Crocker is working with North Andover state Rep. Linda Dean Campbell on a bill that would allow school mental health counselors to conduct their clinical work in schools to become a licensed therapist, provided the counselor has the proper coursework and a licensed therapist oversees their work.

The bill does not change the requirements to become a counselor, it instead provides schools the option to be a training ground that many already are, she explained. Also, having licensed therapists in the schools working with children would allow for schools to bill Medicaid and other insurances, which would provide more funding to schools to conduct these services, she said.

“It (the mental health crisis) is something the (pandemic) laid bare, and because it was laid bare we can put an emphasis on fixing a broken system,” Campbell said.

The good thing is, “everything that we are witnessing is treatable,” Rainen said. “Kids are resilient and if we play to that strength and show that we can get out of this, they will realize it too.”

Reporters Mike Labella and Jill Harmacinski contributed to this report.