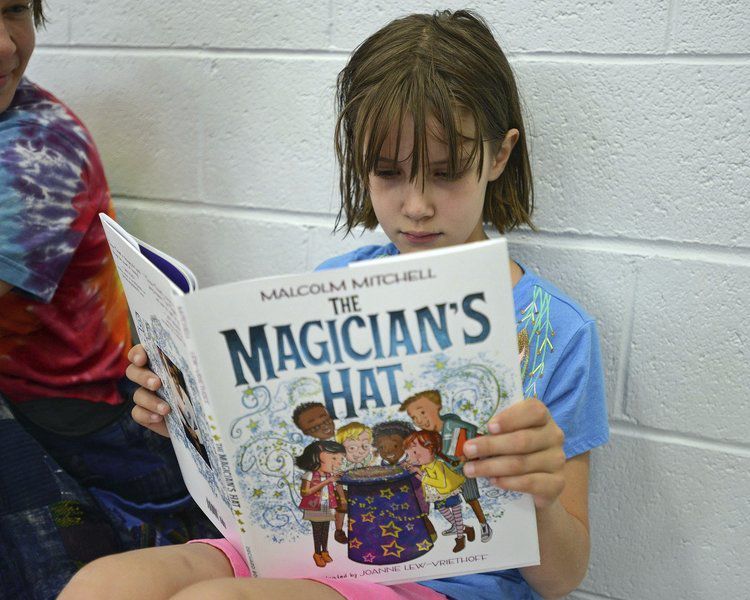 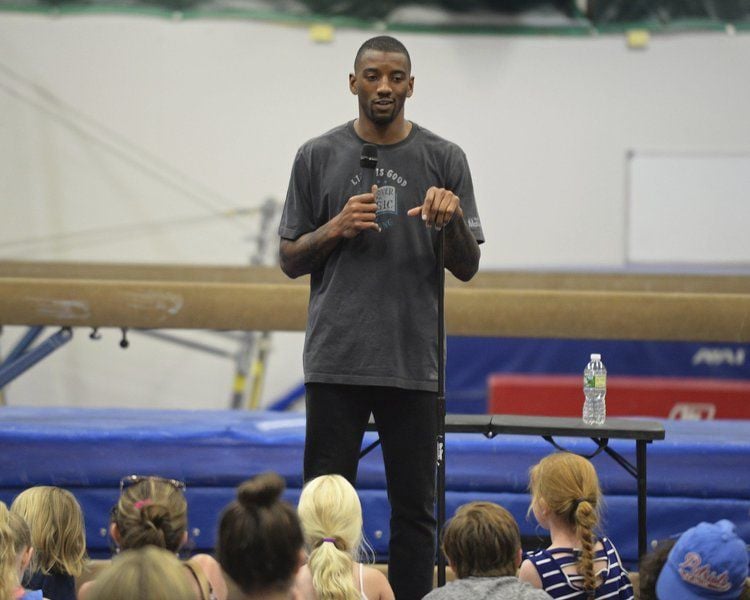 RYAN HUTTON/ Staff photo New England Patriots wide receiver Malcolm Mitchell speaks to a crowd of kids at the Haverhill YMCA as part of a "Reading Rally" put on by Mitchell's literacy foundation "Read with Malcolm." 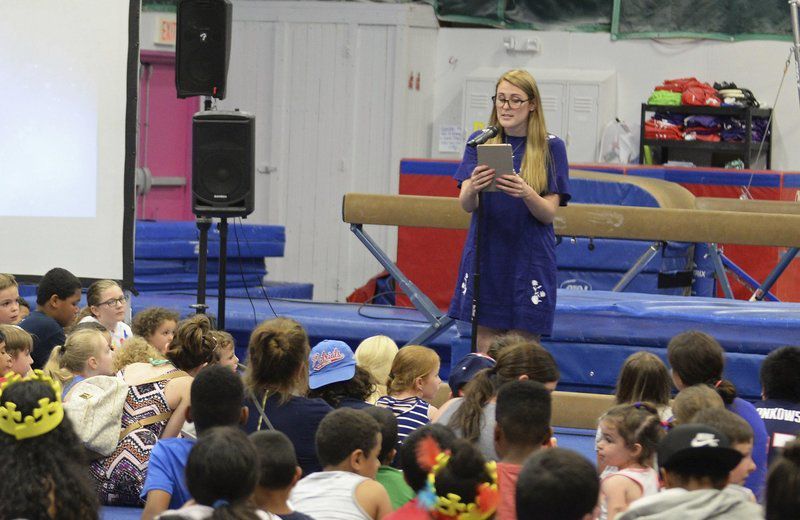 RYAN HUTTON/ Staff photo Kelsie Hinds, of the Haverhill-based "Stories" podcast warms up the crowd of children at the Haverhill YMCA as part of a "Reading Rally" put on by New England Patriots' wide receiver Malcolm Mitchell's literacy foundation "Read with Malcolm."

RYAN HUTTON/ Staff photo New England Patriots wide receiver Malcolm Mitchell speaks to a crowd of kids at the Haverhill YMCA as part of a "Reading Rally" put on by Mitchell's literacy foundation "Read with Malcolm."

RYAN HUTTON/ Staff photo Kelsie Hinds, of the Haverhill-based "Stories" podcast warms up the crowd of children at the Haverhill YMCA as part of a "Reading Rally" put on by New England Patriots' wide receiver Malcolm Mitchell's literacy foundation "Read with Malcolm."

HAVERHILL — Patriots wide receiver Malcolm Mitchell brought a little magic with him when he spoke to a crowd of more than 300 children and family members on Monday evening at the Haverhill YMCA.

He was there to lead a "reading rally" intended to encourage children to read over summer vacation.

In addition to reading aloud his book, "The Magician's Hat" — every first grader in the city received a copy — Mitchell teamed up with John Logan, the unofficial team magician for the Patriots, for a fun, interactive show.

Mitchell and his youth literacy initiative, "Read with Malcolm" and the nonprofit "Share the Magic Foundation," organize reading rallies that are designed to boost reading skills and provide access to books for students in communities where resources are limited, organizers said.

Children enjoyed pizza before the rally, which was held in the Y's gymnasium, then were treated to ice cream afterwards.

Logan and Mitchell worked together on one illusion in which Logan poured orange juice into a cup, placed a sheet of paper over the cup then placed the cup, upside down onto the head of a young girl they picked from the audience.

Joanna Dix, president of the HEC, said her organization's objective this year is to get kids excited about reading.

"We're partnering with Haverhill Promise and the YMCA to help prevent a loss in reading skills over the summer," she said.

Many children in the audience clutched their copies of "The Magician's Hat," including Tilton first-grader Enelyse Morales, who sat next to her mother, Vianela Cedano, while waiting for Mitchell to arrive.

"It's a good book," Enelyse said. "There's a magician who shows up at a family fun fair and does a lot of magic tricks."

Michelle Dissler, a first-grader at Walnut Square School, came with her brother, Miles, 3, and their mother, Amanda Dissler.

"I love the book," Michelle said about "The Magician's Hat."

The first 75 students (who were not first-graders attending the event) also received a copy of Mitchell’s book.

Mitchell told children that his biggest challenge in life was learning to read, and that he didn't start reading until he was 19 years old.

He told kids that reading can sometimes be boring, and tough, and that "sometimes I just like watching Sponge Bob instead of reading."

"In order to be the best you can possibly be, you need to read," he told kids just before reading his book aloud. "For those who have a book, I'd like you to follow along with me. I'll show you the page I'm on."

Following his presentation, Mitchell, who had come to Haverhill in March of last year to speak with children at the Tilton School about the importance of reading, told The Eagle-Tribune that he came to Haverhill again because of the community.

"It's their willingness to do whatever it takes to encourage their kids to understand the importance of reading, that brings me back here," he said. "Every community wants to send that message, but not all of them have the resources."

Mitchell said he's currently working on two new children's books with Scholastic, and that his next book will be released next year.