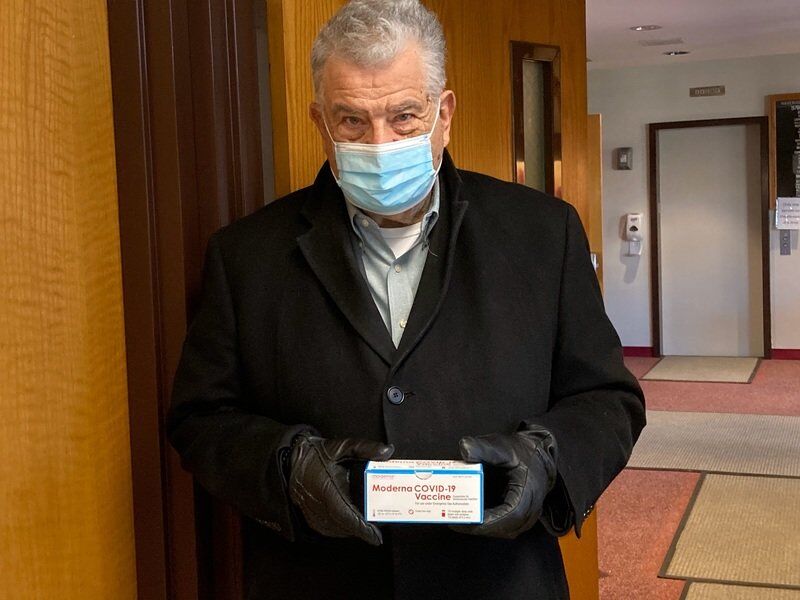 Courtesy photoHaverhill Mayor James Fiorentini holds a box of vaccines delivered to the city for use immunizing police and firefighters. 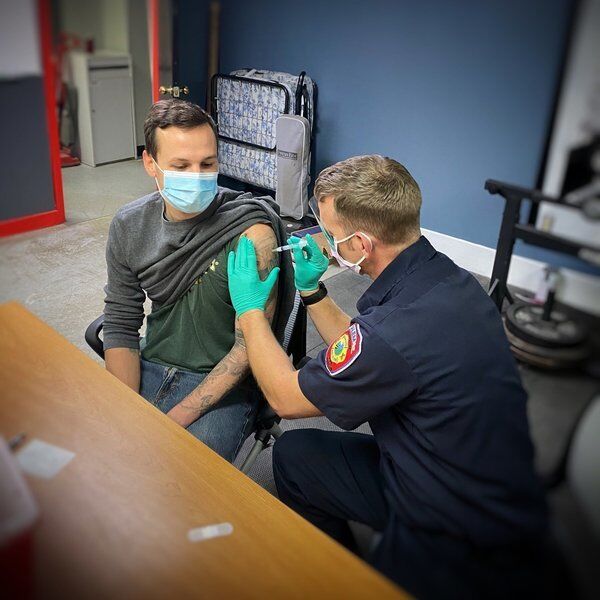 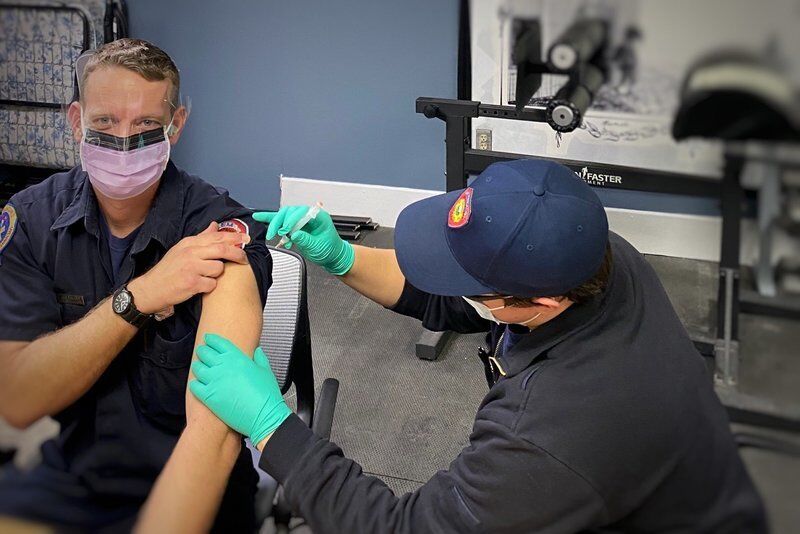 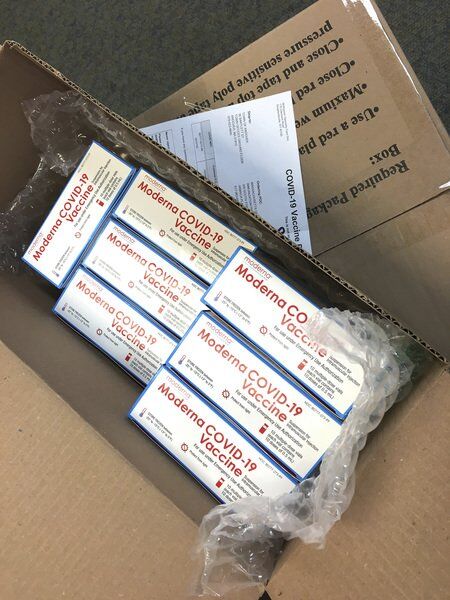 Courtesy photoA thousand doses of the Moderna COVID-19 vaccine are being held in an undisclosed location in Andover before they are given to police and firefighters across the region.

Courtesy photoHaverhill Mayor James Fiorentini holds a box of vaccines delivered to the city for use immunizing police and firefighters.

Courtesy photoA thousand doses of the Moderna COVID-19 vaccine are being held in an undisclosed location in Andover before they are given to police and firefighters across the region.

Somewhere in Andover is a freezer containing 100 vials of frozen fluid so valuable that town Health Director Thomas Carbone refused to reveal its location.

The COVID-19 vaccine has finally arrived.

"It's like gold," Carbone said, referring to the Moderna vaccine that will start going into the arms of local police and fire personnel this week.

Each vial holds 10 doses, he said.

In a plan worked out with the state Department of Public Health, Andover is the storage location for 1,000 doses of the vaccine which will be injected into the arms of police and firefighters from eight communities, including Andover, Methuen, North Andover, Readiing, North Reading, Lynnfield, Saugus and Wilmington.

On Monday, the day designated by the state for the start of the immunization phase for first responders, representatives of those communities will arrive in Andover to pick up their allotment of the drug. Each community will hold vaccine clinics for its first responders over the next week or so.

Health and public safety officials from both Massachusetts and New Hampshire said it's been a long wait, but that news of the vaccine's arrival is welcome after 10 months of unrelenting pressure on police officers and firefighters on the front lines of the global pandemic.

"You know as you're going out the station door and you are walking into someone's house, you will be surrounded by a virus that's taking its toll on the whole world," said Salem EMS Director Doug Devine, who has run the COVID-19 response for the Fire Department since the pandemic began. "Now we'll feel just a little safer. We'll have some more protection. We've got PPE, and now the vaccine."

He called Thursday of last week a "great day," as the first round of vaccinations was given to the first group of police and firefighters.

"We've been dealing with this for 10 months and it has taken a toll on staff and families," Devine said. "This is a big turning point for us."

In Andover, Carbone said while he was thrilled when the vaccine was delivered, "My stomach has been in knots since it arrived.''

"It's a very fragile vaccine,'' he said. "We've got to make sure we're treating it right, temperature-wise, and how we handle it. I'll worry until we get it into the arms of our first responders. But we were very happy when it got here on Tuesday (of last week)."

Carbone noted the vaccine can be stored in a freezer for up to six months, but that once it thaws, it cannot be refrozen. He said it can stay in a refrigerator for 30 days and can stay at room temperature for 12 hours.

"But once we puncture it, we have to use the dose in six hours," he said. "If we make a mistake in handling it, you've wasted vaccine that is needed. I just want to get these vaccines going."

Carbone said health departments around the state are accustomed to running flu clinics for 400 or 500 people, so these local clinics for 50 or 60 police and fire department staff members each day over the course of the next week or so shouldn't be too challenging. It's just that the stakes seem a lot higher.

He said this group of vaccinations will serve as a good test for when the vaccine is rolled out to a larger population, including teachers and people with multiple health issues in the next phase. Making things easier, he said, is that the state has authorized EMTs and paramedics in every community to administer the vaccine, meaning there will be plenty of people available to help with immunizations.

In Methuen, Mayor Neil Perry told the City Council last week that immunizations will start Wednesday of this week for firefighters. He refused to comment further to The Eagle-Tribune about any other vaccination plans, though he did tell the council that the next phase for teachers and people with "co-morbidities," or multiple health problems, is scheduled to start in February.

Methuen fire Chief Tim Sheehy did not respond to several requests for comment. Lawrence fire Chief Brian Moriarty said the city's vaccination program would begin Monday, adding that he was already signed up to get his shot.

Moriarty and Sheehy were infected with COVID-19 last year.

In Haverhill, the Moderna vaccine will be given by city Health Nurse Mary Connolly during clinics Monday, Wednesday and Friday for firefighters and Tuesday and Thursday for police officers, according to Mayor James Fiorentini.

In Massachusetts, state health officials required that any community ordering vaccines for its first responders must have at least 200 people to vaccinate. Haverhill and Lawrence met that threshold, but because most other communities in the area did not, they joined forces, said Carbone, Andover's health director.

"By combining communities, it made it easier to ship it out," Carbone said of getting the vaccine from the state.

Andover fire Chief Michael Mansfield said clinics for police and firefighters in his town will be held from 7 to 9 a.m. on Jan. 14, 15, 16 and 19. He said those receiving the vaccine will get it at the end of their shifts and then will have at least one day to recover, should there be any side effects.

Other communities are using similar precautions. While the vaccine has been deemed 95 percent effective against the virus, there is the potential for side effects that could sideline some first responders, Mansfield said.

"The most common are headache, fatigue, pain at the injection site and joint pain," he said. "This will offer ample recovery time. I want them 100 percent while on duty."

In NH, a shared experience

Police and firefighters in New Hampshire had the choice of going individually to one of 13 locations across the state to get vaccinated, including one in Londonderry, or waiting a few days and getting the shots with other members of their departments, said Devine, the Salem EMS director.

Members of the Salem fire and police departments chose to take the shots together, which Devine said has served as a morale-boosting and team-building experience.

"Salem was one of the hardest hit towns in New Hampshire," he said of the effect of COVID-19. "We really felt the sting. The state has done a really good job of making the vaccine available and we felt compelled to do a closed pod — to do it as a team."

He said two battalions came in for shots Thursday of last week and two other battalions are getting immunizations Sunday.

"We asked the guys and they said they'd rather take it as a group," he said. "That's a testament to this group. They wanted to do it together."