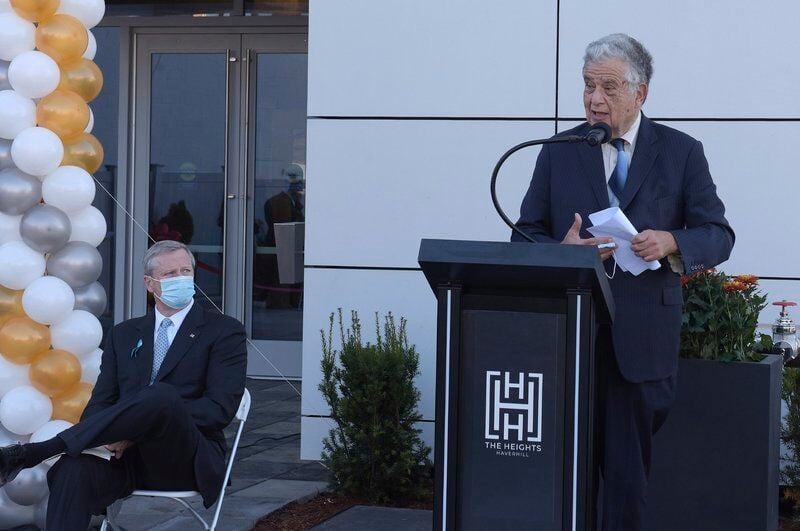 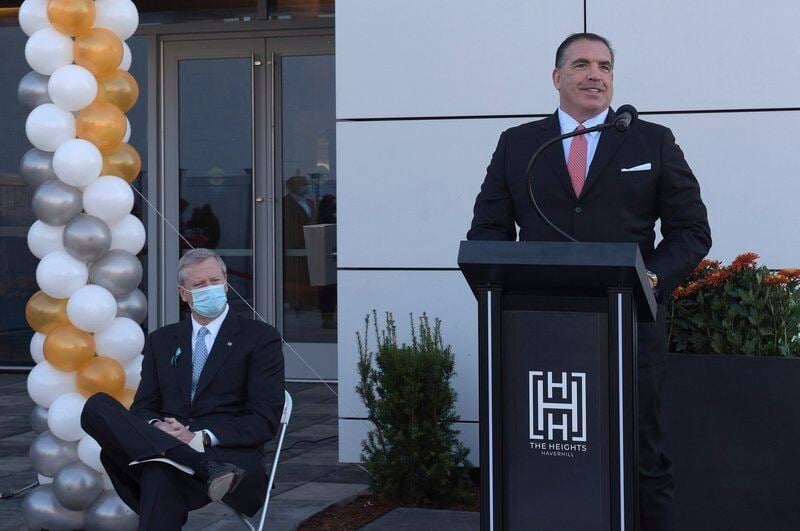 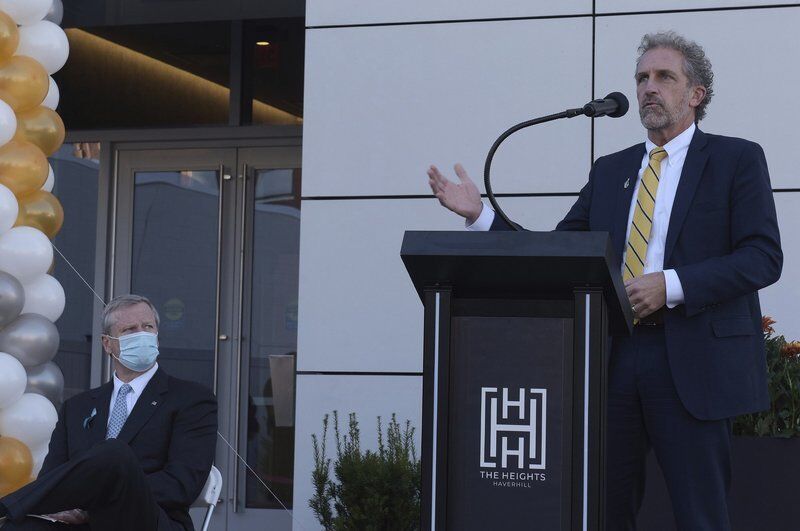 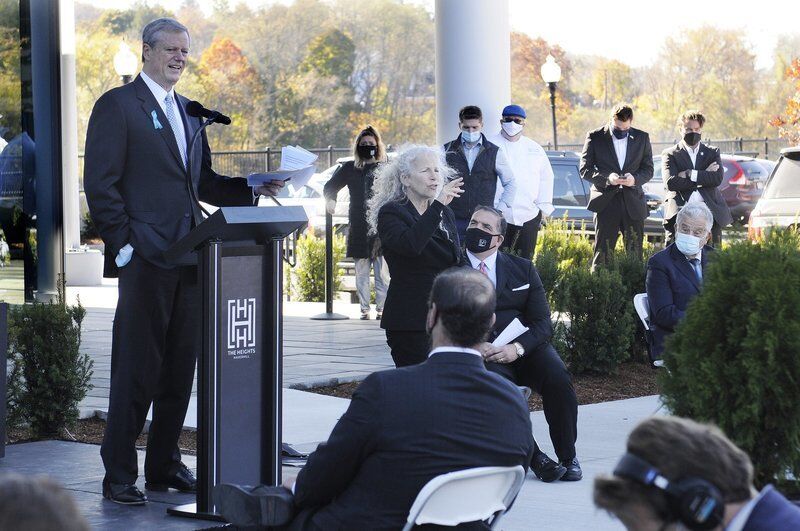 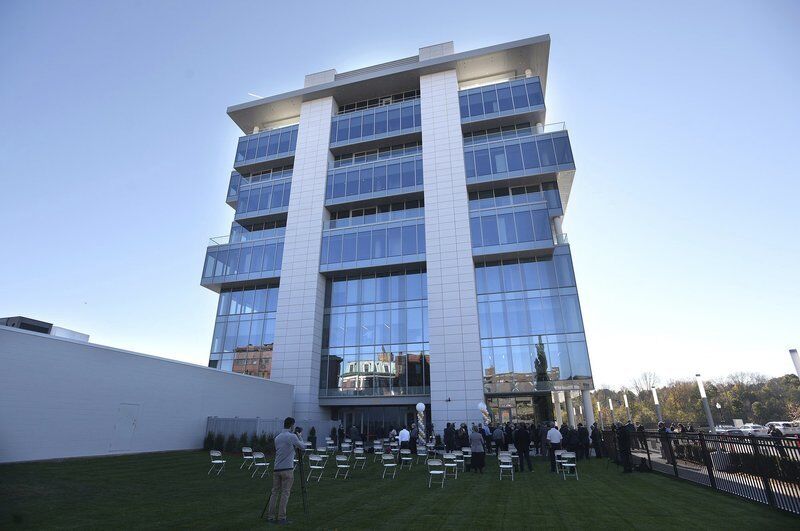 TIM JEAN/Staff photoChairs are set up socially distant for guests before a ceremony to open Sal Lupoli's new complex called The Heights at Haverhill. 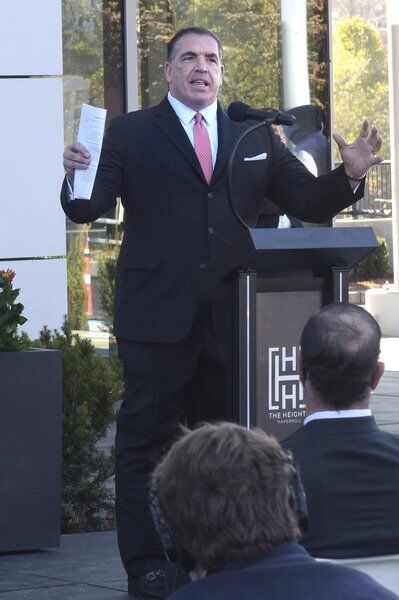 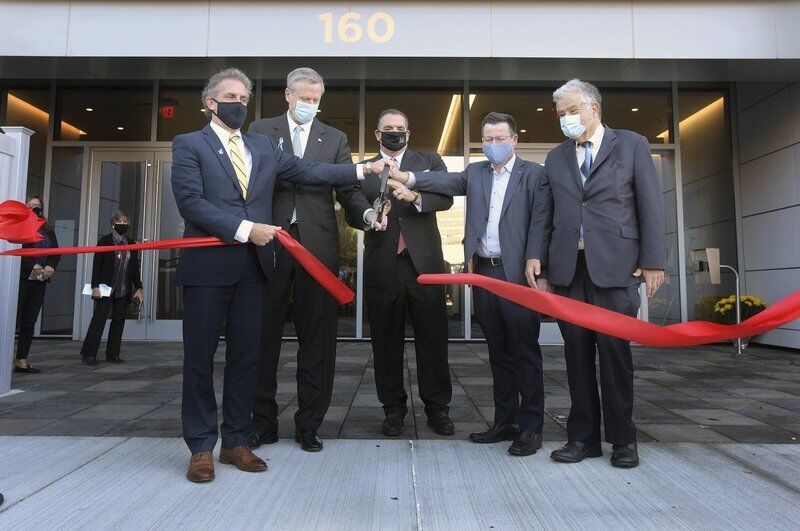 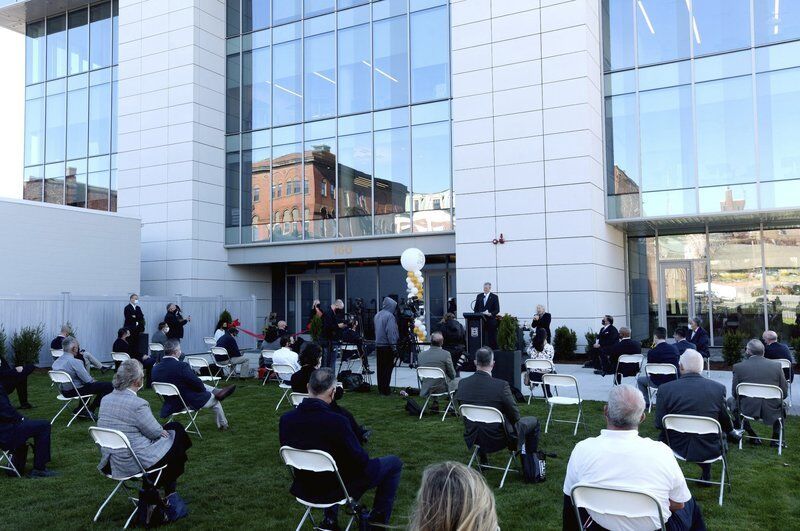 TIM JEAN/Staff photoChairs are set up socially distant for guests before a ceremony to open Sal Lupoli's new complex called The Heights at Haverhill.

So say local and state leaders as the new Heights at Haverhill complex, a towering 10-story housing-commercial building, opens in the eastern end of downtown.

They talked about the balance of money that is allowing big projects like the Heights at Haverhill to happen — private investment by developers like Lupoli supported by public investment from the state.

They also talked about the geographic balance which the project brings to the downtown. Projects like the Heights at Haverhill and Harbor Place at the eastern gateway to downtown will bring the same economic boost to the east that has been enjoyed by western downtown thanks to development there in recent years.

Western downtown has been thriving after developers invested millions upon millions of dollars to turn old, abandoned shoe factories into hundreds of housing units. That, combined with a series of new restaurants and other businesses, has made Washington Street and the rest of western downtown a bustling area.

At Thursday's Heights at Haverhill event, Baker referred to Lupoli's project at 160 Merrimack St. as being part of the "reimagining" of Haverhill.

"Sal and his team, working with local officials, state officials, lenders and others, have managed to create and reimagine properties across gateway cities all over the Merrimack Valley," Baker said in reference to projects that Lupoli has created in Lowell and Lawrence, and now Haverhill.

Fiorentini told a crowd that the Heights building is a "magnificent part of the new Haverhill" and that it was made possible through the creation of a public-private partnership, similar to the kind that resulted in the creation of Harbor Place at the eastern end of Merrimack Street.

The mayor said Merrimack Street and the eastern end of downtown languished for 50 years, while the Washington Street and the western end saw much activity, with the new housing and restaurants.

Then came a turnaround with the demolition of the Woolworth Building, which had sat vacant for decades. It opened the door to the construction of Harbor Place, a housing-commercial partnership between the nonprofit Greater Haverhill Foundation and the Planning Office for Urban Affairs, the nonprofit residential development arm of the Boston Catholic Archdiocese.

Fiorentini said that about a decade ago, Merrimack Valley Chamber of Commerce President Joseph Bevilaqua brought him to Lawrence to meet Lupoli.

"I asked Sal Lupoli to get into my car and take a look at a building that had recently come on the market on Merrimack Street," Fiorentini said. "Sal eventually bought the building. A few years later, he came to us and suggested that if we sold him this site, the Haverhill Heights site, which had been a municipal parking lot, that he would consider redeveloping it."

Fiorentini said the key to public-private partnerships is private industry, which serves to drive such projects, while the public sector plays a supporting role.

The public side of the partnership involved the infrastructure, the mayor said, adding it was critically important to have a major tenant in the Heights building. That happened when Northern Essex Community College agreed to establish a culinary arts institute at the Heights.

"The city also contributed money and the state put millions of dollars in, primarily in a MassWorks grant, to help build the boardwalk and the parking facility," Fiorentini said.

Turning to the governor, the mayor thanked him, saying Lupoli's project would not have happened without Baker's support.

"We hope that this isn't the end of the redevelopment of Haverhill and that it is only the start," Fiorentini said.