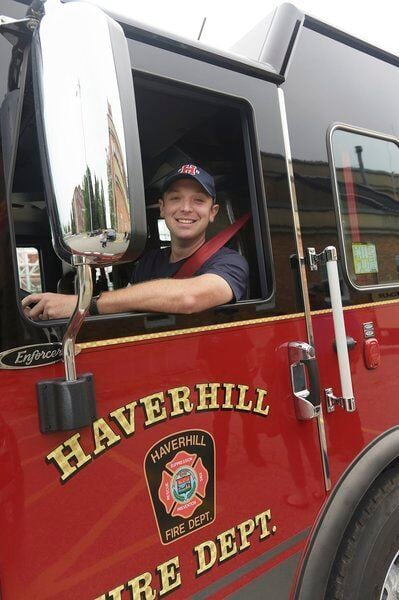 TIM JEAN/Staff photoHaverhill firefighter Corey Pond prepares to drive Engine 3 at the Water Street Fire Station during a training exercise on one of the city's new trucks. 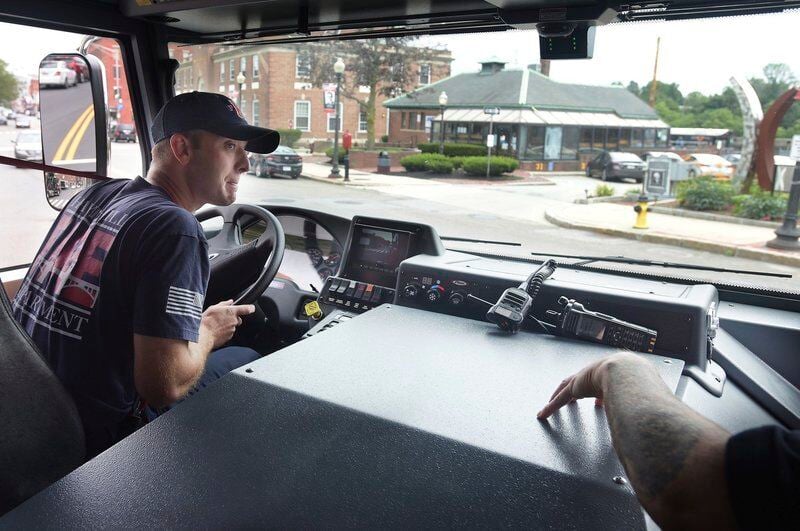 TIM JEAN/Staff photoFirefighter Corey Pond, left, looks up Washington Street before pulling out onto the road during driver training on one of the city's new trucks. In the passenger seat is Capt. Gregg Roberts.

TIM JEAN/Staff photoHaverhill firefighter Corey Pond prepares to drive Engine 3 at the Water Street Fire Station during a training exercise on one of the city's new trucks.

TIM JEAN/Staff photoFirefighter Corey Pond, left, looks up Washington Street before pulling out onto the road during driver training on one of the city's new trucks. In the passenger seat is Capt. Gregg Roberts.

HAVERHILL — There are still a few weeks to go until the Haverhill Fire Department’s two new pumper trucks are fully outfitted and ready to hit the streets to answer calls, but firefighters from the Water Street station recently took Engine 3 for a ride around town to get a handle on it.

On this day, they were learning the mechanics of the Pierce Engine 3 pumper truck that rolled into Haverhill last week. An identical pumper truck will be stationed on High Street, according to Roberts, after six city councilors last year decided to hold out on voting for Mayor James Fiorentini’s budget until he would agree to purchase the trucks to replace 33-year-old ones.

“The new trucks provide reliability and an added water capacity,” fire Chief Bob O’Brien said. “If one of those trucks (in the outer Rocks or Ayers Village stations) went down for maintenance or any other reason, we struggled to backfill — we didn’t have anything to replace it. Reserve trucks are very important.”

The department now has two ladder trucks, eight pumper trucks and a rescue truck, the chief said. The new trucks are instrumental, he said, because pumper trucks carry water to a fire scene.

According to Roberts, all firefighters are cross-trained on each truck and assignments are rotated every eight weeks.

“We try to get them experienced on all of the trucks,” he said.

Roberts explained the role each firefighter plays when a truck arrives at a fire scene.

The person sitting in the passenger seat is the senior officer, Roberts said, and takes command until a person of a higher rank arrives. The Deputy Chief will then command the entire blaze.

Firefighter functions vary by the type of trucks dispatched.

“With the rescue (truck), our primary mission is initial search and rescue,” Roberts said. “The ladder (truck firefighters) have a primary mission of ventilation. They want to get to the roof or windows, while the pumper is going to be establishing a water supply from the hydrant to the pump so they have a continuous water supply.”

A typical working fire has four pumper trucks, Roberts said, with each truck containing the industry standard 750 gallons of water. Each gallon weighs roughly 8.5 pounds and the truck can be depleted in approximately seven minutes, Roberts said.

Cross-training is key so that all firefighters are able to work with any equipment available to them, Roberts said.

“The most common thing we get asked is why there are so many firemen and trucks at a fire and the easiest way to explain it is to use a football analogy,” Roberts said. “A running back is only as good as his offensive line. Every guy in that line has an important thing he’s good at. It’s the same thing with firefighting. You can’t have a good knock-down if your ladder isn’t getting good ventilation going. Each truck plays a part in the outcome of that fire.”

Stronach said that once Engine 3 is outfitted with additional radio equipment, tools are mounted, and medical supplies are stocked, the rig should be ready to hit the road in a few weeks.