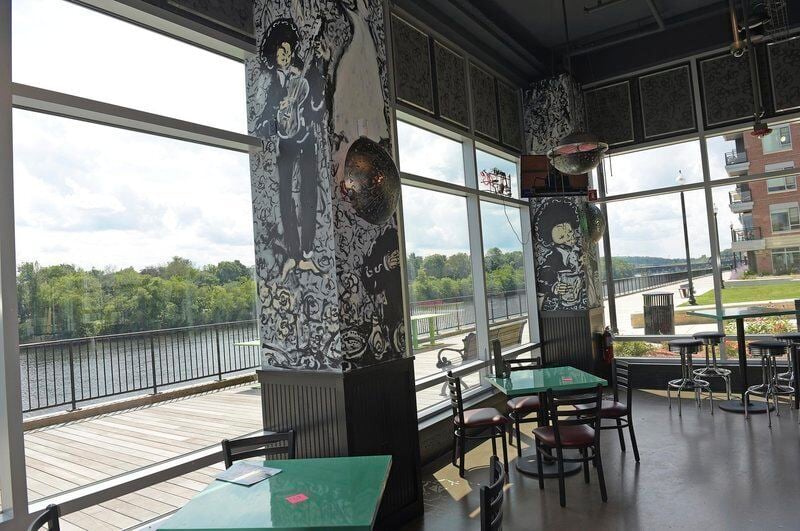 TIM JEAN/Staff photoLooking out at the boardwalk and the Merrimack River behind Barrio Tacos restaurant at Harbor Place in Haverhill. 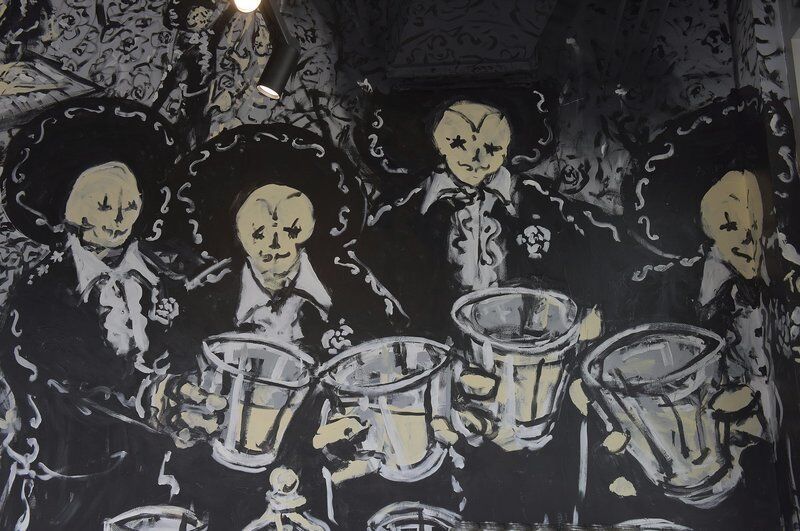 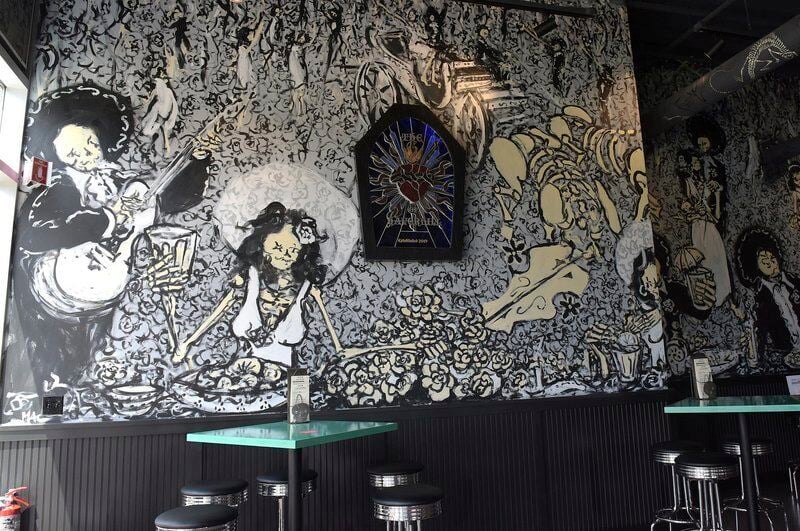 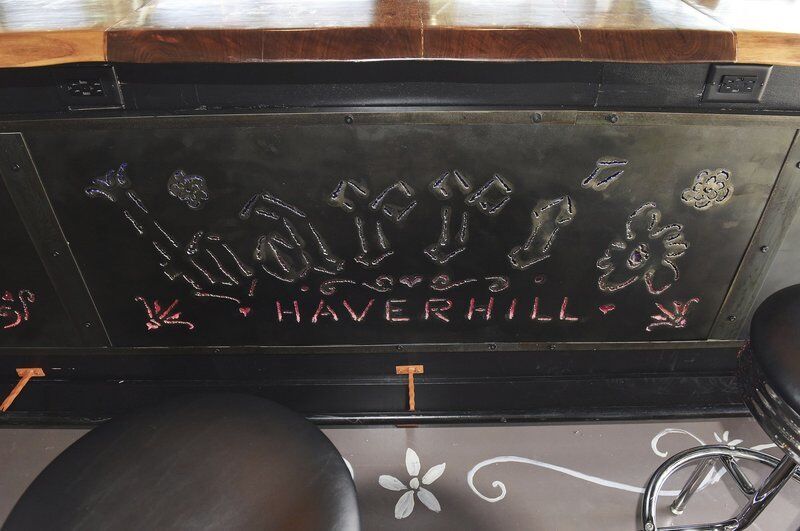 TIM JEAN/Staff photoHand-crafted steel around the bar with "Day of the Dead" decor is part of the look at the new Barrio Tacos restaurant at Harbor Place in Haverhill. 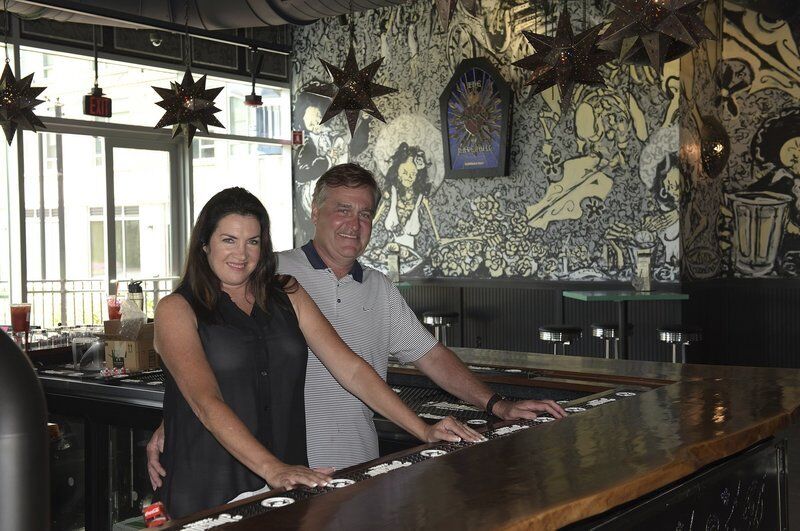 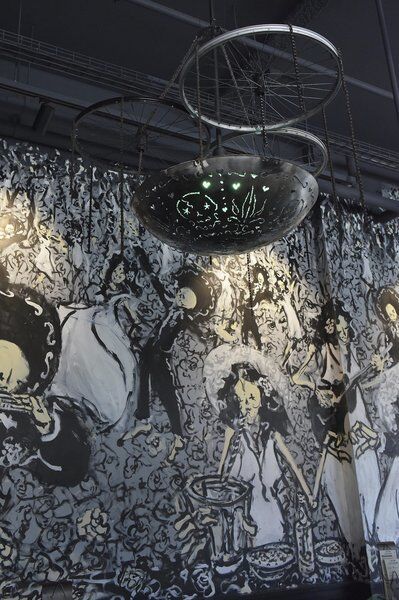 TIM JEAN/Staff photoTorch-cut steel cooking woks are coupled with bicycle wheels to create lamps that hang from the ceiling, while painted walls feature the restaurant's trademark "Day of the Dead" decor at Barrio Tacos restaurant at Harbor Place in Haverhill. 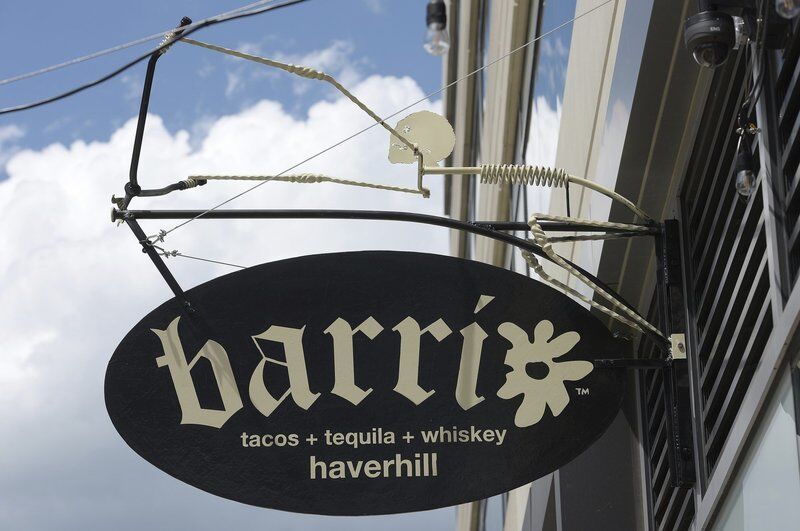 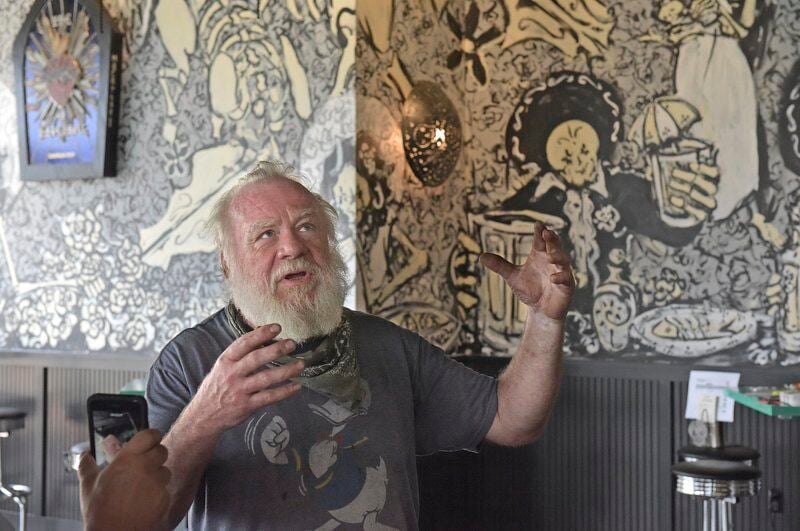 TIM JEAN/Staff photoArtist Michael "Mac'' McNamara of Cleveland talks about the Barrio Tacos restaurant's trademark "Day of the Dead" theme he painted on the walls.

TIM JEAN/Staff photoLooking out at the boardwalk and the Merrimack River behind Barrio Tacos restaurant at Harbor Place in Haverhill.

TIM JEAN/Staff photoHand-crafted steel around the bar with "Day of the Dead" decor is part of the look at the new Barrio Tacos restaurant at Harbor Place in Haverhill.

TIM JEAN/Staff photoTorch-cut steel cooking woks are coupled with bicycle wheels to create lamps that hang from the ceiling, while painted walls feature the restaurant's trademark "Day of the Dead" decor at Barrio Tacos restaurant at Harbor Place in Haverhill.

TIM JEAN/Staff photoArtist Michael "Mac'' McNamara of Cleveland talks about the Barrio Tacos restaurant's trademark "Day of the Dead" theme he painted on the walls.

HAVERHILL — It has mesmerizing wall-to-wall murals, hand-made recycled metal sculptures and a menu packed with offerings that are unique in Haverhill.

Barrio Tacos is not your ordinary taqueria — that's Spanish for a restaurant that features tacos.

And its location is anything but ordinary — along the boardwalk overlooking the Merrimack River.

The long-anticipated first restaurant in the Harbor Place complex at the eastern entrance to downtown, Barrio Tacos was set to open Tuesday with a ribbon-cutting ceremony at 4 p.m. The doors were scheduled to open to the public two hours later.

"We feel they are going to activate this plaza," said Sally O'Rorke, a member of the Greater Haverhill Foundation business group that partnered with the Archdiocese of Boston's nonprofit Planning Office for Urban Affairs to create Harbor Place. "We have a letter of intent for another space in the plaza, and we're working on two other concepts that are unique to the Merrimack Valley.

"Everybody keeps saying, 'It's taken you a long time (to find a restaurant to open at Harbor Place)' and my answer is we only have one bite at this apple, so let's get it right," she said, adding she expects Barrio Tacos to draw customers from across the Merrimack Valley.

Harbor Place overlooks the river in the spot where the old Woolworth building sat empty and decaying for decades. Harbor Place has a mix of commercial and residential units, including a UMass Lowell satellite campus.

Indoor seating at Barrio Tacos is currently at half capacity due to COVID-19, while ample outdoor seating stretches from the restaurant's patio to the boardwalk overlooking the river. All seating is arranged in a way to ensure social distancing, while other health precautions are in place.

A friends-and-family event at the restaurant Sunday drew a big crowd, and an industry trade night was held on Monday.

"The service was super fast and the food was great," local food blogger Gerald Schiavoni said about Sunday's event. "Barrio Tacos is not your typical taqueria as it's also very art centered ... putting more of a focal point on the eastern end of downtown."

Owners Dan and Maggie Osborn of Atkinson wanted to bring the same type of distinctive atmosphere to Haverhill that they brought to downtown Portsmouth, New Hampshire, when they opened a Barrio Tacos there.

"The positive thing about Haverhill is the crowd is already here as the population is much bigger than Portsmouth," Maggie Osborn said, adding there is an even greater population in Haverhill's surrounding communities, which she hopes to draw customers from.

The name Barrio was chosen because it means "neighborhood'' or "community'' in Spanish, Dan Osborn said.

Award-winning muralist Michael McNamara of Cleveland spent hundreds of hours creating the wall-to-wall Day of the Dead-themed black, white and bone colored mural that tells the story of a couple from their first meeting to a celebratory wedding to the creation of a family.

The expansive conversation piece — based on a Mexican holiday that encourages people to pray for and remember friends and relatives who have died — is accentuated with images of well-dressed Day of the Dead skeletal characters engaged in conversation as they eat and drink and dance to music from a band.

"It starts with a man on a motorcycle who meets a young lady who introduces him to the celebration of life," McNamara said of the story. "Throughout their celebration, they meet with friends and relatives and eventually they start their own family. The intent is for the customers to become part of the celebration."

An old conveyor belt system was transformed into a fixture at the center of the restaurant's horseshoe shaped bar.

Hackley scoured a local junkyard to find rusted metal parts that went into creating several sculptures, including one featuring musicians in a band.

"We do all of the Barrio restaurants, including in Cleveland and in Portsmouth," Hackley said about the artwork that he and McNamara create.

As for the restaurant's menu, there's plenty to choose from. You can have a hard or soft shell taco stuffed with braised short rib, thick-cut bacon, jalapeno lime shrimp or any of the other 15 proteins on the "build your tacos" menu, and then top it off with some smoked cheddar, chihuahua or queso fresco cheese.

Add toppings such as cilantro and onions, pico de gallo or poblano chile and choose from four types of salsa, along with any of the nine available sauces including chipotle crema or the exceptionally hot Carolina reaper.

You can also choose from a list of chef recommendations, such as this month's lobster taco.