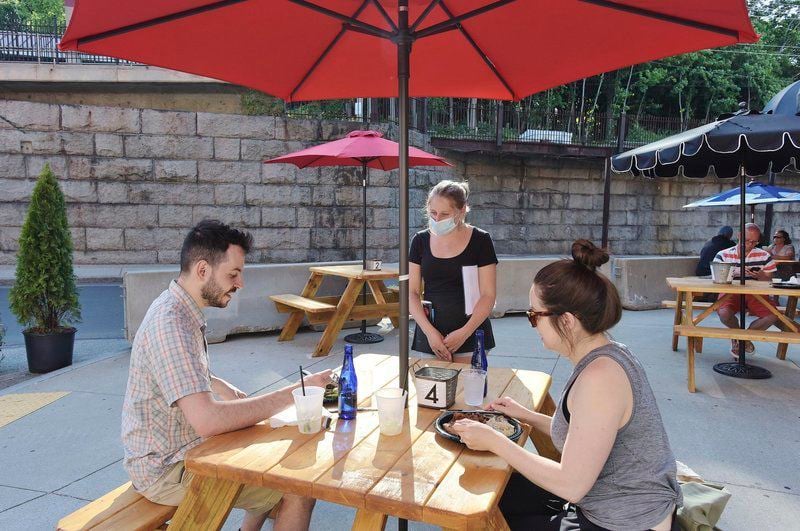 TIM JEAN/Staff photoServer Olivia Stolworthy, center, checks in on Ryan Lambert and his wife, Rachel, of Haverhill as the couple enjoys dinner outside at Krueger Flatbread and Olivia's restaurants in downtown Haverhill. 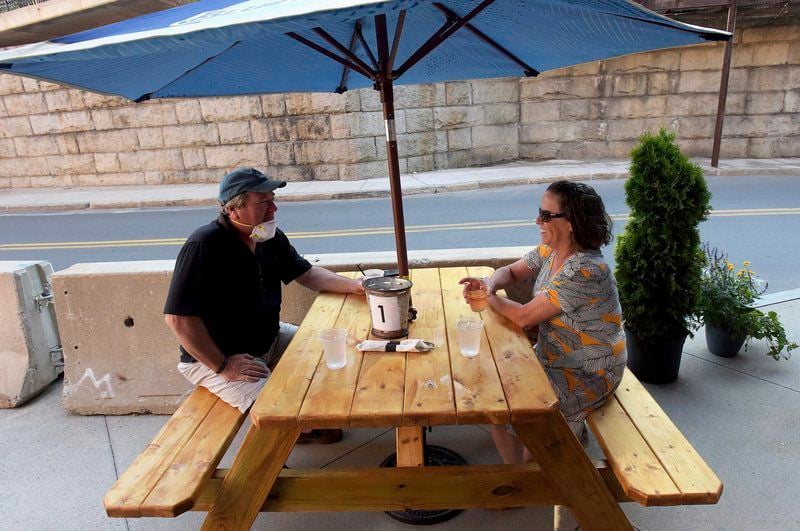 TIM JEAN/Staff photoJohn and Lisa Sweeney of Haverhill enjoy dinner outside at Krueger Flatbread and Olivia's restaurants in downtown Haverhill.

TIM JEAN/Staff photoServer Olivia Stolworthy, center, checks in on Ryan Lambert and his wife, Rachel, of Haverhill as the couple enjoys dinner outside at Krueger Flatbread and Olivia's restaurants in downtown Haverhill.

TIM JEAN/Staff photoJohn and Lisa Sweeney of Haverhill enjoy dinner outside at Krueger Flatbread and Olivia's restaurants in downtown Haverhill.

HAVERHILL — One week into outdoor dining during the COVID-19 crisis, Haverhill restaurant owners say customers are slowly but steadily returning — and the summer forecast is looking bright.

While the state continues with phase two of Gov. Charlie Baker’s reopening plan, Mayor James Fiorentini is offering a program to help the city's restaurants bounce back from the pandemic by expanding their outdoor seating options. Through the program, restaurants are able to apply for grants to add outdoor seating and enhance dining options for patrons.

“The city has moved very quickly to streamline a process that is clear and simple and allows restaurants to change their exterior footprint to serve more customers,” said Dougan Sherwood, president of the Greater Haverhill Chamber of Commerce.

Thirty-four permits were issued after the city's Inspectional Services Department reviewed applications for safety and compliance with the Americans with Disabilities Act in time for the first day of outdoor dining on June 8.

Mike Difeo, owner of Mr. Mike’s restaurant on Route 125 near the Plaistow line, erected a large tent in the parking lot of his business to allow as many as 170 diners to get their favorite “dinner for 2” specials nightly and play Keno seven days a week. Diners can also sit on one of two patios at the restaurant, Difeo said.

“We just took everything outside,” he said. “You’d be surprised how much you feel like you’re at a wedding or a function under the tent. I was scared you’d feel like you were sitting in a parking lot. That was my biggest concern.’’

The city’s grant program allows Haverhill restaurants to get up to $5,000 to purchase outdoor dining supplies, personal protective equipment and other necessary items. So far, 10 restaurants have applied for a grant, said the mayor’s spokesman Shawn Regan.

To block off outdoor areas around restaurants and keep diners safe, the city is leasing jersey barriers that will be provided to restaurants free of charge for five months, Regan said. Since the barriers are leased, restaurants cannot paint or alter them, though the city is exploring other ways to decorate them.

Krueger Flatbread and Olivia’s restaurants, which share a building in the downtown district, purchased 14 picnic tables that can seat up to 60 people in total.

“For us it’s been great. There are a lot of logistical challenges but things are getting smoother each day,” Petrou said. “Customers seem really happy to be outside and, for the most part, have been understanding and patient.”

Difeo said he too has seen a change in customer dining habits since his Mr. Mike's restaurant reopened. Open each night until midnight before the COVID-19 crisis, Mr. Mike’s had to curb weeknight hours because Difeo had trouble filling seats during those hours, he said.

“I’ve noticed since this whole thing started, people are eating earlier,” said Difeo, who now closes his restaurant at 8 p.m. “Since there’s no bar to sit at beforehand, people tend to ... eat much earlier.”

Still, he said he doesn’t impose a time limit on customers or require reservations.

“We tried to do reservations the first few days but were overwhelmed,” he said. “We didn’t want people standing in line. We didn’t want a time limit, because we’re a local place and we have so many loyal customers that I can’t imagine having to ask them to leave. That wouldn’t be fair.”

Matt Gaiero, who owns G’s restaurant on Washington Street with his wife, Denise, said each day of serving patrons outdoors is a “new experience.”

The year-old eatery is normally permitted for 96 guests between its indoor and outdoor space, but has been limited to 10 tables outdoors to serve 30 diners because of COVID-19 restrictions, Gaiero said. In addition to using his restaurant’s front patio, Gaiero also asked the city’s permission to set up customer tables in the alleyway next to the restaurant and was allowed to do so, he said.

Business has been slow but steady, he said.

“After New Hampshire opened up (to indoor dining at its restaurants), the takeout business went right down the tubes,’’ he said, “so outdoor dining in Haverhill came at the right time.’’