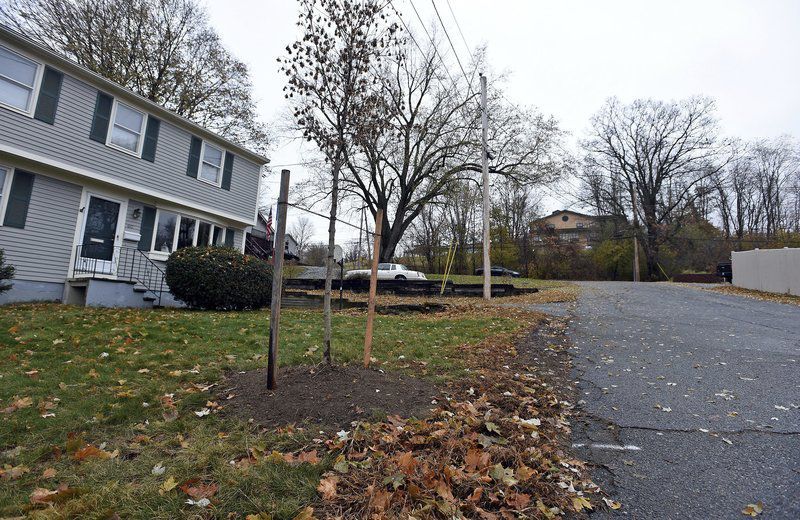 RYAN HUTTON/Staff photoOne of the trees recently planted in a Haverhill neighborhood is supported by stakes. 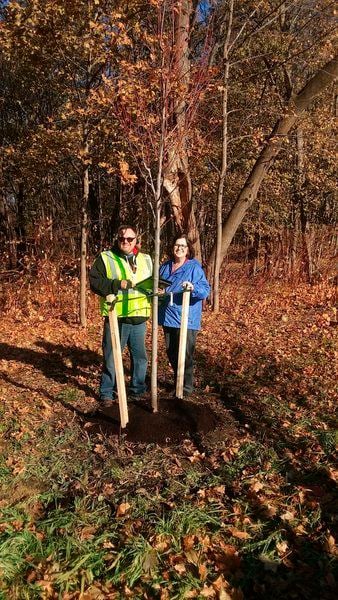 Courtesy photoRalph Basiliere of Haverhill’s Vietnam Memorial Commission and City Councilor Melinda Barrett at the site of a newly planted maple tree, one of 17 trees Groundwork Lawrence planted in and around Mill Brook Park, where the Vietnam Memorial is located.

RYAN HUTTON/Staff photoOne of the trees recently planted in a Haverhill neighborhood is supported by stakes.

Courtesy photoRalph Basiliere of Haverhill’s Vietnam Memorial Commission and City Councilor Melinda Barrett at the site of a newly planted maple tree, one of 17 trees Groundwork Lawrence planted in and around Mill Brook Park, where the Vietnam Memorial is located.

HAVERHILL — Did you arrive home recently to find a tree had been planted in your yard?

The city’s efforts to inject green into neighborhoods by planting hundreds of trees has hit a few snags, with some residents complaining they weren’t aware trees were being planted in their yards.

City officials said Haverhill is nearly done planting 500 trees, mainly along streets and in some parks, as well as in some yards.

If a resident has a problem with a tree that was planted, they are asked to call the city’s constituent services line at 311 and arrangements will be made to remove the tree, said Shawn Regan, aide to Mayor James Fiorentini.

Workers will landscape the area where the tree is taken out, Regan said.

Regan said the trees were placed on the ground next to the street a day or two before planting, and that workers marked the spot where the tree was to go. The resident could see details of the plan and call to cancel if they decided they didn’t want the tree.

About 500 informational flyers were left at the homes of residents where trees were to be planted, Regan said.

Still, some residents have complained about the trees.

The city contracted with Groundwork Lawrence’s “Street Trees” program to manage the project.

At the same time, the state Department of Conservation and Recreation is in its third year of its Greening the Gateway Cities program and recently completed planting about 335 trees in Haverhill, primarily on private property,

This brings the total number of trees the state planted in Haverhill since 2017 to nearly 2,400.

According to the Greening the Gateway Cities website, the program was created with a goal of increasing the number of trees planted in urban residential areas of Massachusetts Gateway Cities. It’s also designed to reduce household heating and cooling energy use by increasing tree canopy cover in urban residential areas, while improving the aesthetic appearance of neighborhoods.

A company called MON planted another 90 trees for the city, but on public property only.

Regan noted that any tree planted under utility wires are a species that will not grow tall enough to impact the wires.

“Only small trees are being planted under utility lines,” he said.

“At Groundwork, we manage a number of tree programs in Lawrence and Haverhill, and also help with outreach for the state program, Greening the Gateway Cities, where we canvas door to door, dropping off literature, and talking to residents, as the majority are planted on private property,” he said.

Ralph Basiliere, chairman of the city’s Vietnam Veterans Memorial Commission, is very happy with the 17 trees which Groundwork Lawrence recently planted in and around Mill Brook Park, where the Vietnam Memorial is located. Ten trees were also planted in White’s Park, which is on the west side of Mill Street in the historic Highlands neighborhood. White’s Park is across the street from the Vietman Veterans Memorial.

If Basiliere purchased the trees at retail cost and had them professionally planted, it would have cost about $700 per tree, he said.

“This helps us take a big step forward in our landscape architectural plans,” Basiliere said. “Groundwork Lawrence was fantastic in meeting our needs for indigenous trees that will provide ample shading and complement the nearby wetland resources.”

He said members of the Historic Highlands Neighborhood Association also like the new trees.

“Through our work, we were able to wrap them in as well,” Basiliere said. “We got them six honeylocust, a cherry tree and three patriot elms, while we got seven Freeman maples, two cherry trees, four Princeton elms, and four October glory red maples.”

Groundwork Lawrence has just a few more trees to plant, after the Dig Safe organization declares the selected areas safe for planting.

“It’s important for people to know that whenever we plant under or near wire, we source out trees from an approved list from National Grid and Eversource,” Lilly said. “Trees that are recommend for planting under or near a power line include hedge maple and service berry, which are small stature trees.”

The state plants a  wide variety of trees through its Greening the Gateway Cities Program. Some of the trees most frequently planted in Haverhill include maple, oak, hornbeam, tulip tree, elm, service berry, ginkgo, zelkova, fir and redbud.

Learn more about the state’s program by visiting online at Massurbancanopy.