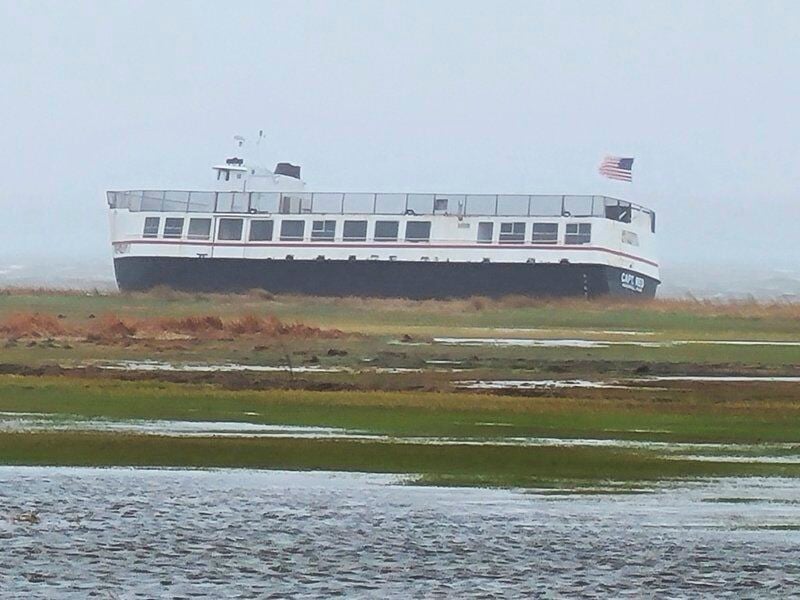 File photoTim Slavit's 400-passenger tour boat broke loose from its moorings near the Salisbury Reservation last Friday and was pushed by high winds until it ran aground at low tide on the Joppa Flats salt marsh across from the Plum Island Turnpike. The boat was freed at the next high tide and was driven to the public docks at Newburyport's central waterfront. 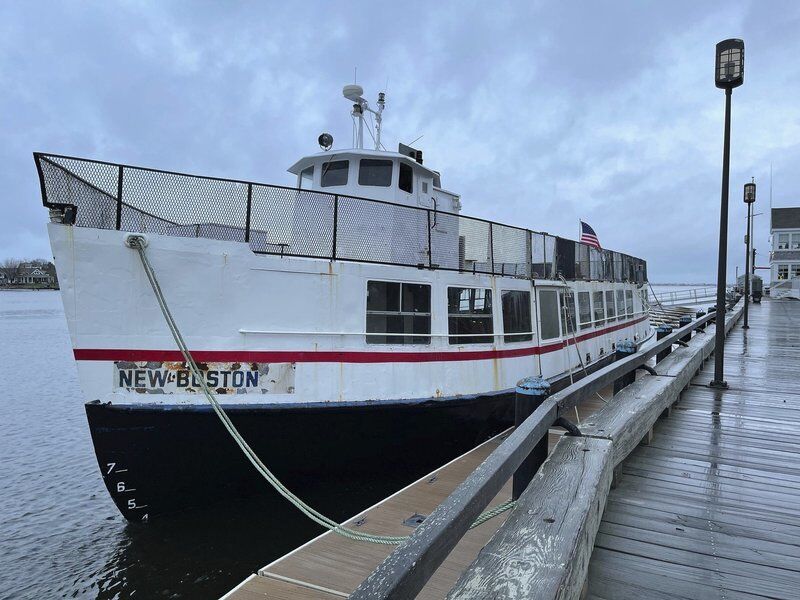 File photoTim Slavit's 400-passenger tour boat broke loose from its moorings near the Salisbury Reservation last Friday and was pushed by high winds until it ran aground at low tide on the Joppa Flats salt marsh across from the Plum Island Turnpike. The boat was freed at the next high tide and was driven to the public docks at Newburyport's central waterfront.

HAVERHILL — As former Haverhill Harbormaster Tim Slavit's 400-passenger tour boat is tied up at the public docks on the Newburyport waterfront, the fate of his plan to launch a river tour business in Haverhill remains undecided.

The good news is his boat escaped being damaged after it broke loose from its mooring offshore near the Salisbury Reservation during last Friday's storm. The boat ran aground on Newburyport's Joppa Flats.

The bad news is Slavit continues having problems with obtaining permission to place a mooring for the boat in the river in Haverhill.

On March 11, under orders of the Haverhill harbormaster, Slavit removed two concrete moorings he had placed in the Merrimack River near the Water Street fire station. City officials said Slavit installed the moorings without the harbormaster's permission, which is is required by state law.

Last Thursday, Slavit made another attempt to place a mooring in the river in Haverhill, this time offshore from the public boat ramp next to Crescent Yacht Club. He was stopped by fire Chief Robert O'Brien, who told Slavit he had not obtained permission for the mooring from Haverhill Harbormaster Michael Vets, and so was installing it illegally.

Slavit said Mayor James Fiorentini and other city officials have been playing games with him for months, and that he applied for a permit before trying to place the mooring in the river.

"We've asked the harbormaster numerous times to inspect the mooring gear," Slavit said. "We finally received a notice on Monday that he would meet us on April 24 to help place our mooring. I don't know why it's taking so long."

"He paid for a permit and although they were good to go, he knew he had to see me first," Vets said. "He jumped the gun by trying to place his mooring in the river."

Slavit said the mayor has been a supporter of Slavit's plan to bring a tour boat business to Haverhill, but that now Fiorentini is turning his back on him. The mayor has issued a request for proposals for a "Seasonal Riverboat Touring Service," Slavit said, opening the door to businesses that could compete with him.

"They don't own the river and I'm sick of begging to put a mooring in the river," Slavit said. "We have insurance, we have a master's license and we're coming to the city."

O'Brien said that last Thursday afternoon just before 1 p.m., he and Vets received complaints that Slavit was placing a mooring in the river near the public boat ramp at the yacht club.

O'Brien said he and one of his Fire Department deputies met Slavit at the boat ramp and saw that one of his sons was using heavy equipment to remove a concrete mooring from a trailer, in preparation for taking it to the water's edge.

"I responded as Harbormaster Vets was unavailable ... His job here is part time," O'Brien said. "Given the history with Mr. Slavit, I requested police presence to keep everything above board.

"I walked up to him and told him to stop what he was doing as he was placing it illegally without permits, and they stopped what they were doing," O'Brien said. "As I was leaving, I explained the situation to police and they also explained to Slavit that he must discontinue what he was doing."

O'Brien said there is a difference between private and commercial moorings and that "size matters as to where you can place them."

Slavit's 105-foot-long boat named the Capt. Red after his father — the late William "Red'' Slavit, longtime Haverhill harbormaster — had been moored offshore from the Salisbury Reservation for the last few weeks. On Friday, the boat went adrift during a storm.

Salisbury Harbormaster Willem Van de Stadt said the boat broke free from its mooring on the Salisbury side of the Merrimack River during a period of high tide and that strong winds pushed it across the river to the Newburyport side, where it ran aground on the Joppa Flats.

The boat was lifted by the next high tide and Slavit drove it to Newburyport's public docks, where it was still tied up late Monday afternoon.

Newburyport Harbormaster Paul Hogg said Slavit's boat showed up at Newburyport's public docks on Saturday morning unannounced. He said he spoke to Slavit on Monday and was told he hopes to move the boat on Thursday.

In the meantime, Hogg said that as of Monday, Slavit owes Newburyport $1,890 for three days of tying up to the city's docks and that he will be charged a fee every day until he moves the boat. Hogg said Newburyport charges a weekday fee of $5 per foot for boats over 101 feet long and $6 per foot on weekends and holidays. It's not about the money as there are circumstances where we will make judgement calls ... We are not in the business of putting anyone in danger,'' Hogg said, "but this is a totally different situation.''