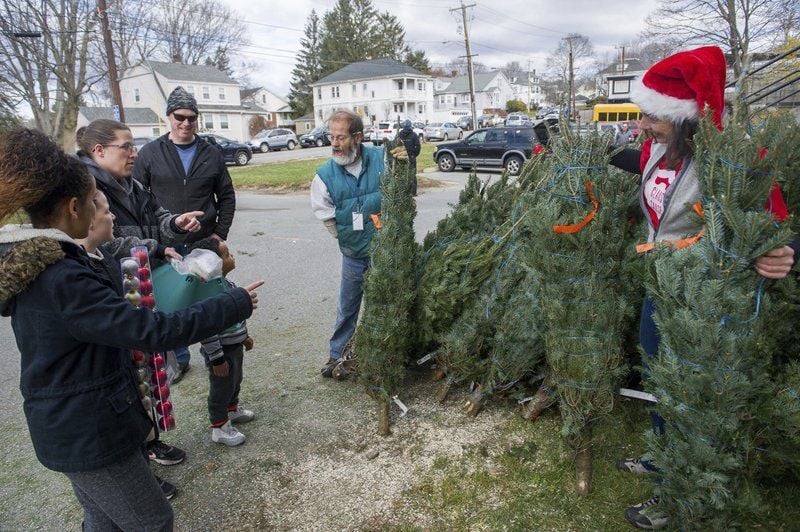 AMANDA SABGA/Staff photo A family along with volunteers pick the perfect tree from the Christmas Tree Santas, a non-profit organization based in Newburyport, who distributed 200 trees to local families in Haverhill on Saturday morning. 12/3/16 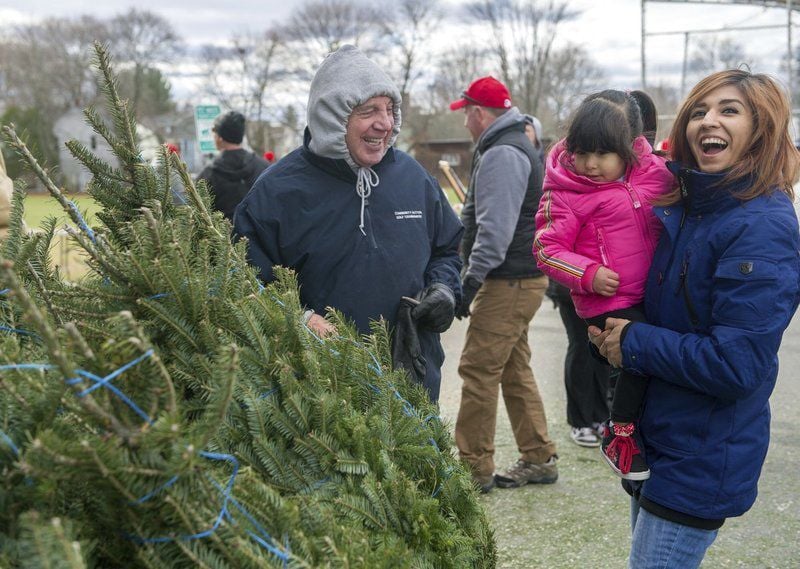 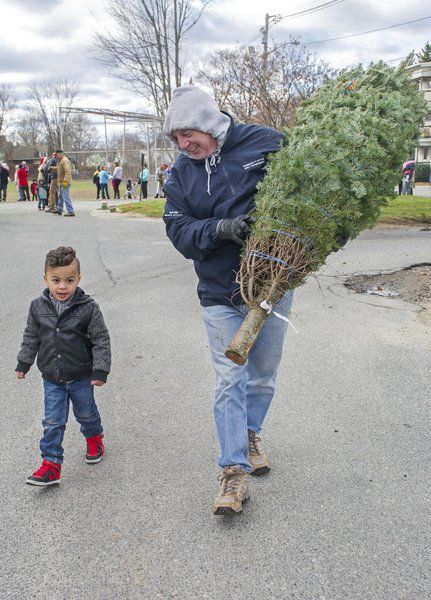 AMANDA SABGA/Staff photo Jordan Veloz, 3, of Haverhill walks with Patrick Conway after selecting his tree from the Christmas Tree Santas, a non-profit organization based in Newburyport, that distributed 200 trees to local families in Haverhill Saturday morning. 12/3/16 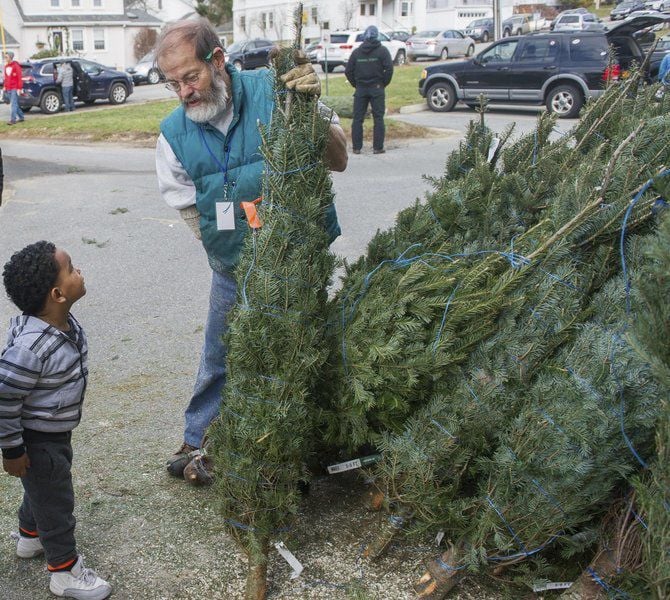 AMANDA SABGA/Staff photo A family along with volunteers pick the perfect tree from the Christmas Tree Santas, a non-profit organization based in Newburyport, who distributed 200 trees to local families in Haverhill on Saturday morning. 12/3/16

AMANDA SABGA/Staff photo Jordan Veloz, 3, of Haverhill walks with Patrick Conway after selecting his tree from the Christmas Tree Santas, a non-profit organization based in Newburyport, that distributed 200 trees to local families in Haverhill Saturday morning. 12/3/16

Staff at the Fox Center, located on Elm Street, made it into a fun event for families who showed up for free, natural trees.

Children were treated to a visit from Santa, whom they got to share their Christmas wish lists with. Families enjoyed chili, cornbread and hot apple cider, and brownies, which were donated by Dianne's Fine Desserts of Newburyport.

"It was mobbed," said Deborah Linett, director of Head Start. "We must have had 500 or more people including parents, children, grandparents and other family members who wanted to be part of this winter wonderland event. We were prepared with three huge pots of chili."

Alex Gramling, president of the nonprofit Christmas Tree Santas based in Newburyport said his organization had been looking to expand outside of the seacoast area where it has operated for five years and found the Head Start program to be a good fit.

Linett called Gramling "an angel" for making trees available to families who might not be able to afford one.

"It's a great gift for me and our volunteers to be able to do this for families," Gramling said. "It meets a financial need and a deeper emotional need around the holidays, which can be a stressful time for some families. And to know a tree is taken care of and they can gather around, is a great gift and joy for me."

Gramling's organization was created in 2011 after a woman and her children stopped by his house to pick up an old aluminum Christmas tree he was giving a way. The woman told him she could not afford to buy a tree.

"I thought about them and other families in our community who were just like them, who could not afford a Christmas tree for Christmas," Gramling said. "I decided to help by creating Christmas Tree Santas and began raising money from family, friends and local businesses. And that first year we gave away 200 trees on the North Shore, and another 100 in Atlanta, where I grew up. And I have business partners as I'm in marketing."

His organization donated more than 3.500 trees since its founding and recently brought 200 to Haverhill to distribute to Head Start families at the Fox Center.

"We've always wanted to expand locally and it was a good fit with our connections to Community Action's services office in Amesbury," he said.

Linett said all of the parents in Community Action's Early Childhood programs along with its community partners, International Child Care Center and Froggy's Play School in Bradford, who signed up for a tree, received one.

A flatbed truck from Canada delivered the trees the morning before.

"Any extra expenses like a Christmas tree, during the holiday season, is a burden for low-income working families," Linett said. "I'm just so touched by this."

Linett said there were enough volunteers on hand to ensure there was very little waiting. Families got a choice of trees in a size they felt would fit best in their homes. Each family also each received a box of ornaments and a string of 100 miniature lights.

"One little boy was helping carry his family's tree to their car with one of our tree runners, then gave the runner his candy cane as thanks," Linett said. "The parents were touched and our volunteers were as well."

"One young woman said it was her first Christmas tree," Linett said. "People were just ecstatic. And it wasn't just the people who were receiving the trees. The people who were distributing them, including Alex Gramling, were ecstatic too."

Community Action Director John Cuneo brought his chainsaw, which he used to trim the trunks of the trees.

"We're hoping this will be an annual event," Linett said. "This could really become a tradition in Haverhill."

This year Gramling's organization will distribute a total of about 1,200 trees at 10 locations throughout the country, including greater Newburyport, Haverhill, and Malden.

"I have a volunteer coordinator in Charlotte who will be giving away 150 trees. We also have a site in Detroit where volunteers will give away 53 trees. Our sponsor there is Kyle Van Noy (No. 53) newly of the New England Patriots."