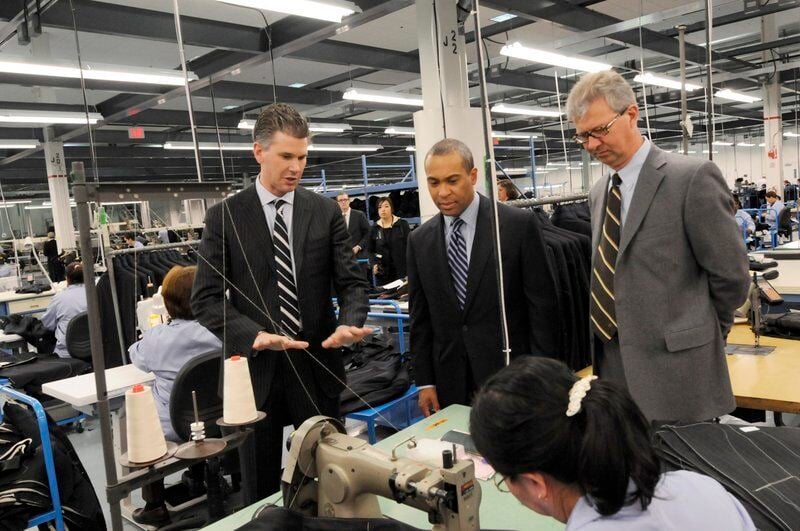 TIM JEAN/File photoDuring a 2009 tour of the Southwick factory in Haverhill, Andre D'Elia, left, of Brooks Brothers talks with then-Gov. Deval Patrick, center, and Claudio Del Vecchio, chairman and CEO of Brooks Brothers, which owns Southwick. The union representing Southwick workers is criticizing Del Vecchio for the company's failure to compensate employees as it declares bankruptcy. 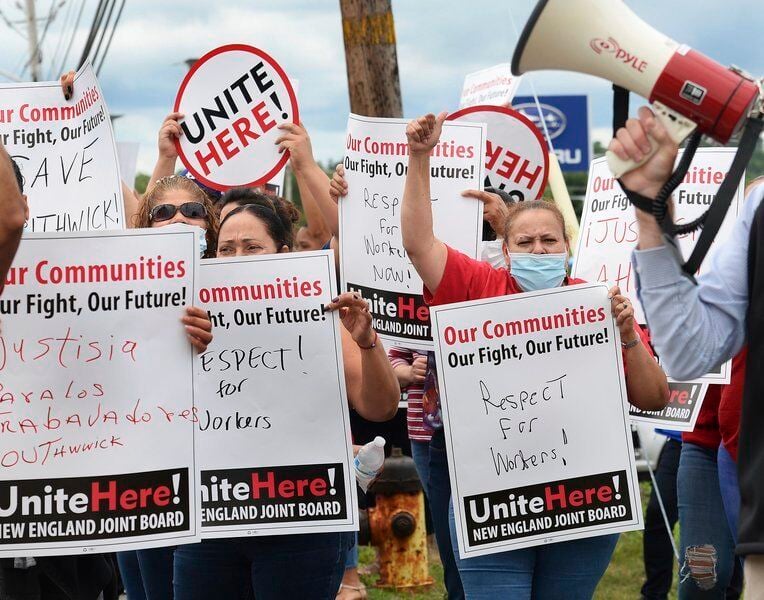 CARL RUSSO/staff photoSouthwick factory workers march with signs and chant outside the company in Haverhill last week, protesting the parent company Brooks Brothers for failing to give them severance pay after Brooks Brothers filed for bankruptcy.

TIM JEAN/File photoDuring a 2009 tour of the Southwick factory in Haverhill, Andre D'Elia, left, of Brooks Brothers talks with then-Gov. Deval Patrick, center, and Claudio Del Vecchio, chairman and CEO of Brooks Brothers, which owns Southwick. The union representing Southwick workers is criticizing Del Vecchio for the company's failure to compensate employees as it declares bankruptcy.

CARL RUSSO/staff photoSouthwick factory workers march with signs and chant outside the company in Haverhill last week, protesting the parent company Brooks Brothers for failing to give them severance pay after Brooks Brothers filed for bankruptcy.

HAVERHILL — Local officials and the union representing Southwick factory's 413 workers are calling the state's investigation of Brooks Brothers tax credits a step in the right direction, but there's a bigger fight ahead, they say.

A battle must be waged to pry the $2.1 million in tax credits away from the company, as it declares bankruptcy.

There is also the looming fight by local elected officials and the union to get severance pay and extended health care benefits for workers who are losing their jobs.

Then there is the city's desire to help the jobless workers find employment, and the fear that a buyer of the Brooks Brothers company might move jobs overseas.

But local leaders and the workers' union are applauding the fight over the tax credits, which the state began last week.

On Thursday, the state Office of Housing and Economic Development sent a letter to Brooks Brothers informing the company that the Economic Assistance Coordinating Council intends to revoke certification related to the tax break agreement made on Dec. 17, 2014.

The company is losing its certification, the letter said, because it failed to create and retain jobs as promised in the contract between Golden Fleece Manufacturing Group, LLC, Brooks Brothers Group Inc., and the state. In addition, the state will also "claw back" all of the $2.1 million in tax credits, or tax breaks, received when Southwick moved to Haverhill, the letter said. Brooks Brothers, a longtime maker of high-quality men's clothing, is declaring bankruptcy. It is the parent company of Southwick.

"The EACC will aggressively pursue every legal remedy to ensure the prompt repayment of all tax credits paid to or claimed by the company," the letter said of the state Office of Housing and Economic Development.

The $2.1 million in tax credits was approved in 2014, with credits issued over several years in exchange for the company's promise to create 70 new jobs between 2016 and 2018. The company was also expected to retain 468 jobs as part of the agreement.

According to the state, Southwick has the right to request a hearing on the matter and must make that request within five business days of the date of the letter.

"This is an important step and I'm grateful that the Office of Housing and Economic Development is standing with workers and Massachusetts taxpayers," Vargas said. "Corporations shouldn't get to reap the benefits of tax breaks and then turn around and deny workers fair treatment. This is a small win, while we focus on doing our best to find a new and upstanding manufacturer to keep these jobs here in Haverhill."

Fiorentini said he remains in contact with Brooks Brothers representatives in New York and intends to file a claim on behalf of the city. He said that claim will investigate the possible repayment of tax breaks granted to the company by Haverhill that were in addition to the state tax credits.

"It's going to be a long process, but we're very glad to see this (state action)," Fiorentini said. "They're in Chapter 11 and with reorganization, (getting repayment of the tax credits) is easier said than done. The best thing that could happen to those workers is that we can find a buyer and keep their jobs. We're hopeful they'll keep some jobs, but whether there will be jobs for these folks and whether it's two jobs or 200 jobs remains to be seen."

When Brooks Brothers filed for bankruptcy on July 7, the bulk of Southwick's 413 employees were left jobless. A "handful" still remain at the factory in the Broadway Business Park, finishing up odd jobs before the plant closes on July 20, according to Ethan Snow, chief of staff for New England Joint Board of the UNITE HERE union, which represents the workers.

According to Snow, July 7 was the same day that Brooks Brothers rejected the union's proposals for severance and a request to extend health care benefits beyond July 31. The union would like to see employee health benefits extended through July 20, 2021, Snow said.

Additional negotiations have stalled, Snow said, and the last correspondence the union had with the company was an email conversation with the human resources department on Wednesday of last week.

"Employees are incensed that their years of service to the company building the brand are not being respected,'' Snow said. "We're pursuing every avenue we can to get the attention of this company and we're really heartened that a state is standing up to a company doing this to workers and residents. These companies have set up shop, taken tax credits and pulled out overnight under the cover of darkness. It's way past time that we figure out how to punish companies that do this and leave communities holding the bag."

Like Fiorentini and Vargas, the union is hopeful another buyer can save Southwick and keep jobs in Haverhill.

"These workers have clothed presidents, military servicemen —  there's really no end to what they can make,'' Snow said. "Southwick is a diamond in the rough because these people have these skills and they're important.

"The question is will Brooks Brothers consider offers to buy this factory and keep the tradition of garment-making alive in this country and in Massachusetts, or will they just subject the factory and workers to a rummage sale and try to get the best deal that they can?''  he said. "We're working tirelessly to try to find those interested buyers."