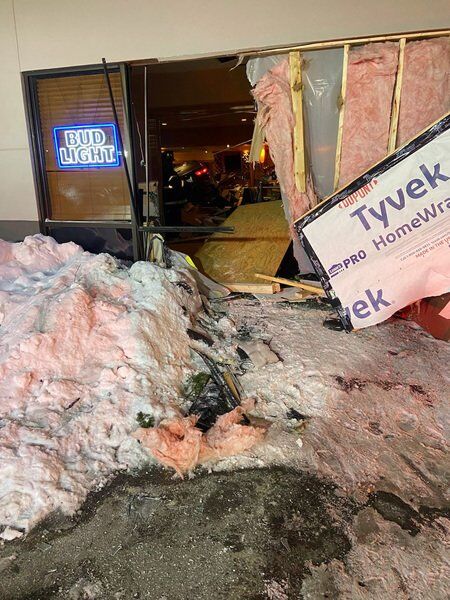 Photo courtesy of Stephen Hart of HaverhillA car crashed through the front of Li’s Fine Asian Cuisine & Sushi Bar at 1186 Main St. and drove through the dining area and into the bar. 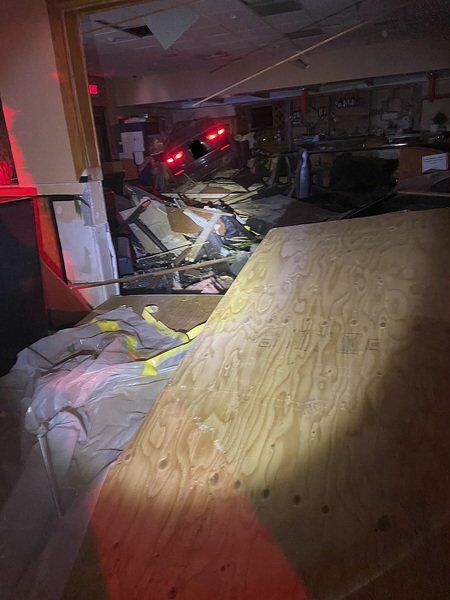 Photo courtesy of Stephen Hart of HaverhillA car crashed through the front of Li's Fine Asian Cuisine & Sushi Bar at 1186 Main St., Haverhill, and traveled through the dining area and into the bar. The car's tail lights can be seen inside the restaurant.

Photo courtesy of Stephen Hart of HaverhillA car crashed through the front of Li’s Fine Asian Cuisine & Sushi Bar at 1186 Main St. and drove through the dining area and into the bar.

Photo courtesy of Stephen Hart of HaverhillA car crashed through the front of Li's Fine Asian Cuisine & Sushi Bar at 1186 Main St., Haverhill, and traveled through the dining area and into the bar. The car's tail lights can be seen inside the restaurant.

HAVERHILL — Li’s Fine Asian Cuisine & Sushi Bar at 1186 Main St. is closed while the owners prepare to rebuild after a vehicle drove through the front windows last weekend, crashing into dining room tables and ending up on the bar.

No one was in the building when the crash happened, the restaurant owner said.

Two other vehicles that crashed into the restaurant over the past week or so also caused damage, but not extensive enough to interrupt restaurant operations.

The latest crash, which happened Saturday morning just after midnight, was caused by an Attleboro woman who was charged with operating under the influence of alcohol and speeding, police said.

The restaurant owners have boarded up the front of the building and said they anticipate it could be several months before they reopen.

Police said the Feb. 4 crash involved a Lowell man who was driving south on Plaistow Road in a 2006 Acura. The man said he hit a patch of black ice and skidded into the restaurant, according to police. Investigators said they determined the driver was speeding and that he struck a sidewalk in front of Li’s that caused his car to go airborne before it crashed into the front of the building.

A police report on the Feb. 8 crash was unavailable in time for this story.

John Li of Haverhill, whose family owns the restaurant, said there is slight incline at the entrance of the restaurant’s parking lot and if a vehicle is traveling fast enough, it can go airborne.

He said the first two crashes caused some damage to the restaurant, but that the latest crash caused such extensive damage that the business had to close.

He said a car drove though the front windows and into the dining area, destroying a dozen or more tables and booths and a separating wall before crashing into the bar, which he said was destroyed.

“The car was literally up in the air,” Li said. “The drink bar is gone and some of the bar’s piping was damaged too. We’re working with our insurance company and we hope to reopen in a few months, but at this point we’re not quite sure.”

He said his restaurant normally closes at 10:30 p.m. and that no one was in the building when the crashes happened.

“This is pretty bad for us, but we’re trying our best to reopen as soon as possible,” he said about the latest crash.

In connection to the latest crash, police charged Olivia Reyes, 22, of Attleboro with operating under the influence of liquor, speeding and negligent operation of a motor vehicle.

Reyes was arraigned on the charges Feb. 16 in Haverhill District Court, where her defense lawyer, Robert Lewin, waived a reading of the police report.

Judge Cesar Archilla entered a not guilty plea on behalf of Reyes and scheduled a pretrial hearing for March 16 via Zoom. He also issued Reyes a 90-day warning, meaning if she is charged with another offense while her case is pending she can be ordered held without bail for up to 90 days.

According to a police report on file in Haverhill District Court, on Feb. 13 at 12:06 a.m. police were sent to Li’s for a report of a single car accident. A witness told police he saw a man running from the scene while a woman was still inside the car.

Police said they found Reyes walking out of the rear of the restaurant. She told police that she was speeding down the hill and lost control, according to the report.

Li’s is located at the bottom of an incline, where Plaistow Road meets Main Street.

Olivia Reyes told police that was alone in the car, but when officers told her that a witness saw a man running from the scene, she admitted she was with her boyfriend, Cody Lewis, 21, of Plaistow, according to investigators.

Police said they found Lewis at the American Legion, 176 Main St., Plaistow. He told police he ran from the scene of the crash because he has anxiety and was scared. Both Reyes and Lewis refused medical treatment, police noted in their report.

During questioning, Reyes told police she had been at a bar in Plaistow and that she only had two drinks, the report said.

Police said Reyes’ eyes were glassy and bloodshot and that they could smell an odor of alcohol. She told them, “I only had two” and “I know I’m not drunk,” according to a police report.

After failing a field sobriety test, Reyes was arrested and charged with operating under the influence of liquor, according to the report. She was also charged with negligent operation and speeding.

Police said they searched the Kia and found a backpack in the rear seat containing multiple bottles of alcohol.

According to the police report, while being booked at the Haverhill Police station, Reyes submitted to a breathalyzer test, which showed a blood alcohol level of .14%. The legal limit is .08%.