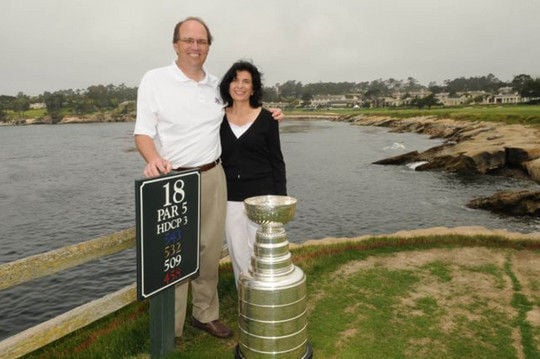 Pebble Beach CEO Bill Perocchi with his wife, Nanci, both Merrimack Valley natives, pose with the Stanley Cup on the 18th green at the famed Pebble Beach golf course back in 2011. 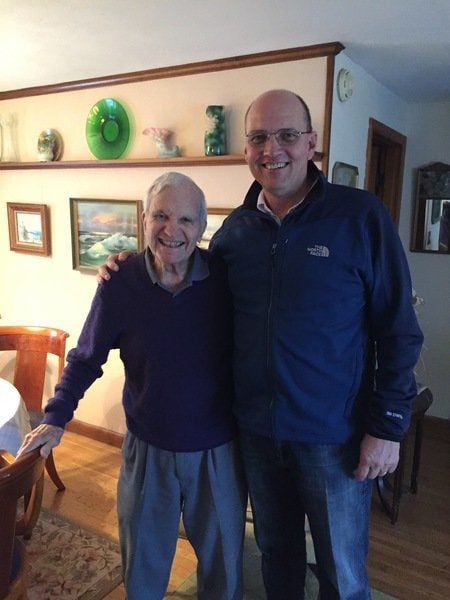 Long-time area coach Stephen Perocchi, on left, poses with his nephew and Pebble Beach CEO Bill Perocchi in January of this year. Stephen passed away on Saturday after an illness. He coached football and taught in the area, including Lawrence High. for nearly four decades.

Pebble Beach CEO Bill Perocchi with his wife, Nanci, both Merrimack Valley natives, pose with the Stanley Cup on the 18th green at the famed Pebble Beach golf course back in 2011.

Long-time area coach Stephen Perocchi, on left, poses with his nephew and Pebble Beach CEO Bill Perocchi in January of this year. Stephen passed away on Saturday after an illness. He coached football and taught in the area, including Lawrence High. for nearly four decades.

There is not a better rags-to-riches story in the Merrimack Valley than Bill Perocchi's life story.

He grew up in the Lawrence projects. He received some help and encouragement from his uncles. Then he became a star student-athlete at Brooks School. And when a possible college football career ended early his freshman year, due to injury, he became a full-fledged student at the University of New Hampshire.

Perocchi, noted for his tireless work ethic, became a star in business at G.E. Capital, Doubletree Hotels and for the last 22 years as CEO of Pebble Beach Company, including five golf courses and three hotels, managing the entire property.

"It was the right time," said Perocchi, who will maintain the family residence on Pebble Beach with his wife, Nanci (Shaheen) Percocchi, a native of Methuen.

"The plan was to be here for a years," said Perocchi, who had built a home in Seabrook, N.H. early in the 2000s with the expectation of retiring there. "But it was tough place to place to leave ... for so many reasons."

Perocchi had retired in the late 1990s with his family while living in Scottsdale, Az., but was part of a group formed by U.S. Olympic executive director and Major League Baseball commissioner Peter Ueberroth with the hopes of purchasing Pebble Beach Company.

After the purchase was complete Perocchi was offered the CEO position, which he agreed to accept for a "short" period.

The plan was for his children to attend Brooks School, like he did. That plan had one issue -- his family adored Pebble Beach.

"It has been one of the great pleasures of my life and my family," said Perocchi.

During his 22 years as CEO, Perocchi has led Pebble Beach Company through many great celebrations and some unprecedented challenges. Since 1999, it hosted three U.S. Opens (2000, 2010 and 2019), two U.S. Amateurs (1999 and 2018), and its Centennial Celebration. Under Perocchi’s leadership, investing over $500M on resort improvements.

Perocchi also guided Pebble Beach through major challenges after 9/11, the 2008-09 Great Recession, and most recently, the COVID pandemic.

“Bill was instrumental in helping us purchase Pebble Beach 22 years ago, and has had tremendous success as CEO since then. He is widely respected by our ownership group, community and employees,” said the two founding partners, Ueberroth and Richard Ferri. “Possibly his greatest accomplishment has been navigating the company through some extremely difficult challenges and having our resort emerge even stronger each time. We are grateful for Bill’s leadership, determination, and vision during his tenure.”

One thing Perocchi didn't do upon leaving the Merrimack Valley move two decades ago was the fact he never forgot where he came from.

He donated $1 million in helping start the fund to build a new facility for the Boys & Girls Club of Lawrence on Water Street, a favorite hangout of his growing up in the city.

"Bill Perocchi is a special, special person. In fact, you have to include his wife, Nanci, too," said former club director Steve Kelley. "What they did for our club and the kids of Lawrence could never be repaid. He helped take our club to another level."

Perocchi and his wife also continued to make donations to other Lawrence-based causes, including Lazarus House.

Perocchi will remain involved with Pebble Beach as a Co-Chairman of the board of directors with Brian Ferris and Heidi Ueberroth.

His replacement as CEO will be David Stivers, presently the President of Pebble Beach. Perocchi and Stivers have been working together since before Pebble Beach.

“David has played an important role in many areas of our business over the past 21 years,” Perocchi said. “He has been my partner throughout this journey, and I know the company will be in very good hands under his leadership.”

In retirement, Perocchi is planning to spend nearly half of the year in Rye. N.H.