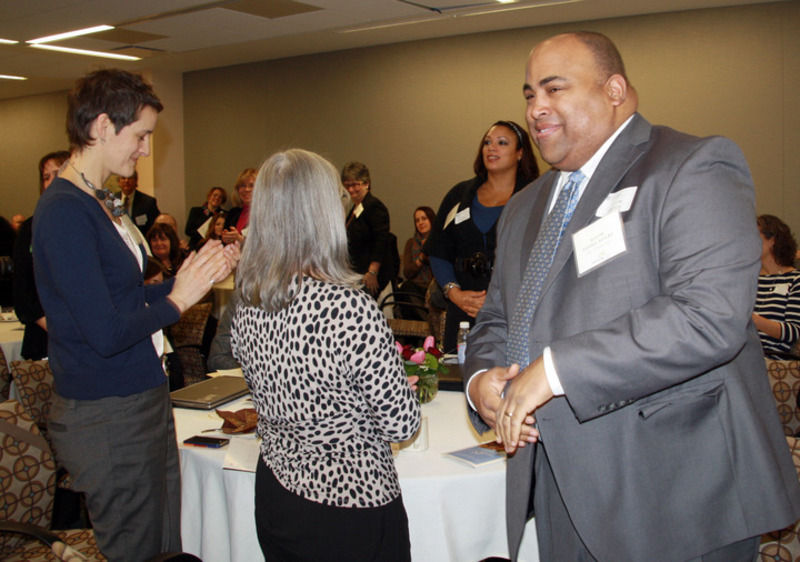 Mayor Daniel Rivera stands after Lawrence receives a $700,000 award from Working Cities Challenge. Lawrence received the most money out of the six cities who won the competition at the Federal Reserve Bank of Boston. 1/15/14 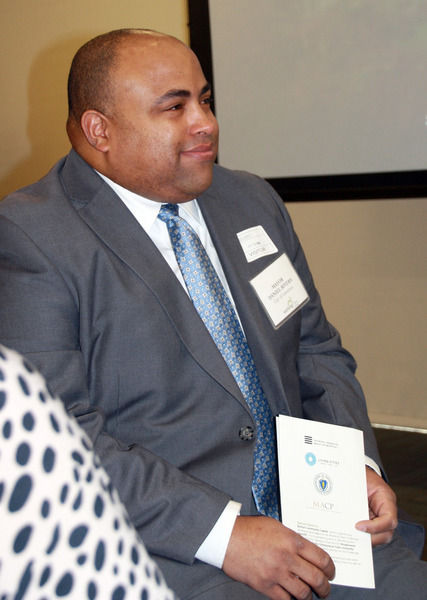 YADIRA BETANCES/Staff photo. Mayor Daniel Rivera smiles after Lawrence receives a $700,000 award from Working Cities Challenge. Lawrence received the most money out of the six cities who won the competition at the Federal Reserve Bank of Boston. 1/15/14 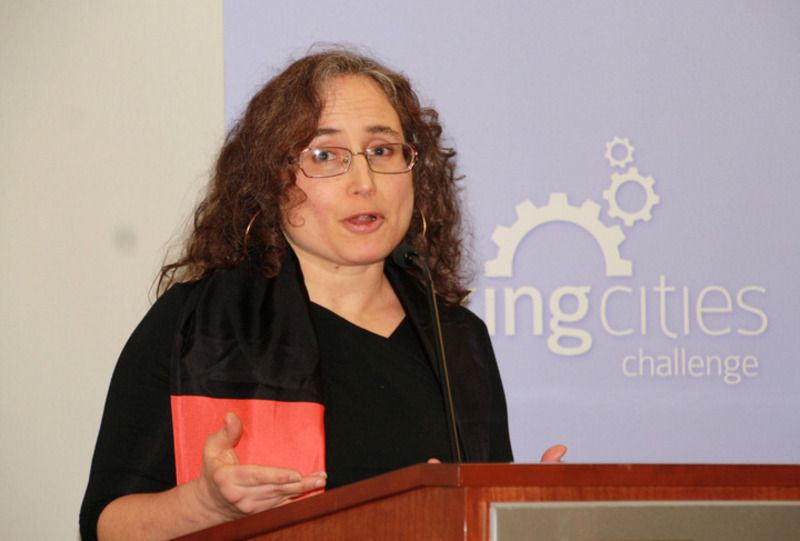 YADIRA BETANCES/Staff photo. Jessica Andors of Lawrence Community Works speaks at the Federal Reserve Bank of Boston about how the $700,000 award from Working Cities Challenge will help the City of Lawrence. 1/15/14

Mayor Daniel Rivera stands after Lawrence receives a $700,000 award from Working Cities Challenge. Lawrence received the most money out of the six cities who won the competition at the Federal Reserve Bank of Boston. 1/15/14

YADIRA BETANCES/Staff photo. Mayor Daniel Rivera smiles after Lawrence receives a $700,000 award from Working Cities Challenge. Lawrence received the most money out of the six cities who won the competition at the Federal Reserve Bank of Boston. 1/15/14

YADIRA BETANCES/Staff photo. Jessica Andors of Lawrence Community Works speaks at the Federal Reserve Bank of Boston about how the $700,000 award from Working Cities Challenge will help the City of Lawrence. 1/15/14

LAWRENCE — As Lawrence CommunityWorks staff members helped families recover from foreclosures, they saw the emotional toll it took on them. They noticed the same stress level with families struggling economically because of low-paying jobs.

“It not only creates stress, but it leads to poor nutrition, school performance and the parents taking any job and not spending a lot of time with their children,” said Jessica Andors, executive director of Lawrence CommunityWorks, a nonprofit community development corporation.

Yesterday, Lawrence received a $700,000 award from Working Cities Challenge — the lion’s share of the $1.8 million given to six Massachusetts cities. The money will be used to launch the Lawrence Working Families Initiative, helping parents get job training.

“Education is our calling card like oil is to Texas and corn is to Iowa,” said Gov. Deval Patrick during the award ceremony.

Lawrence was one of 20 cities vying for the Working Cities Challenge, a competition led by the Federal Reserve Bank of Boston, along with public, private and nonprofit agencies, the Living Cities collaborative, the Mass Competitive Partnership and the Commonwealth of Massachusetts.

Haverhill submitted a proposal to create the Second Chance Vocational Academy Initiative, aimed at training young adults and help them get jobs, but it was not chosen.

The Boston Federal Reserve Bank is one of 12 institutions across the country, along with the Board of Governors in Washington, D.C., that make up the nation’s central bank. In addition to Massachusetts, the Boston branch serves the First Federal Reserve District which includes New Hampshire, Maine, Rhode Island, Vermont and Connecticut (except Fairfield County).

In Lawrence, the initiative will have its headquarters in the Lawrence Public Schools’ Family Resource Center and will be managed by Lawrence CommunityWorks. In addition to city and school officials, the initiative brings together 30 businesses, public and nonprofit agencies, to help in the school’s turnaround plan and address the connection between families’ economic challenges and student’s success.

“I’m walking on air,” said Andors. “There’s a part of me that’s not surprised, because this is a recognition of what is going on in the city already, but another part of me that’s blown away because we had some stiff competition.”

Andors said the Lawrence Family Initiative was originally mapped out by Lawrence Public School Receiver Jeff Riley as part of his turnaround plan.

“We made a commitment to working together to offer a better chance for kids and adults,” Riley said. “I think we’ve seen over the last two years that Lawrence students shouldn’t have their expectations defined by financial or social obstacles. But we also realize that the more secure, healthy and economically stable things are at home, the easier it is to come to school ready to learn and excel.

“Engaging and supporting the entire family is the best thing for the student,” Riley said. “This is the first step in the process and, with the job training and work placement, its a win for everyone.”

“If the parent is working, they are in a good economic situation and have stable life, it helps them concentrate on their studies,” Rivera said.

“But if they’re worried about their parents’ status, they’re stressed out which does not help them to focus on becoming better students,” Rivera said. “I lived that. When my mom working, I felt safer and more in tune with school.”

In a statement, U.S. Rep. Niki Tsongas lauded the city for getting the award.

“These top prizes shine a spotlight on the exceptional work each city is doing to improve the lives of its citizens,” she said. “It also grants Lawrence and Fitchburg the financial support to continue cultivating positive change within their neighborhoods.”

Among the 30 agencies that will be part of the initiative, is COMPASS for Kids. The group works with homeless families that need everything from job training, health care, housing, food and transportation.

“The families we work with are at the extreme end,” said Jodi Willinsky Hill, executive director of COMPASS for Kids. “What they need is hope. This is a terrific opportunity to support families and move the economy forward.”