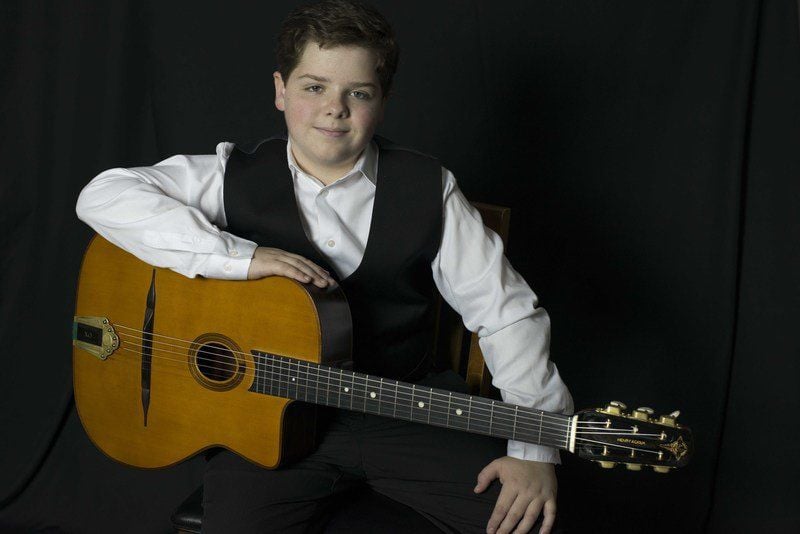 Courtesy photoHenry Acker, a natural at guitar, joins his father and uncle for a night of gypsy jazz on Tuesday, April 17 at Jocko's Jazz at the Sahara Club and Restaurant in Methuen. 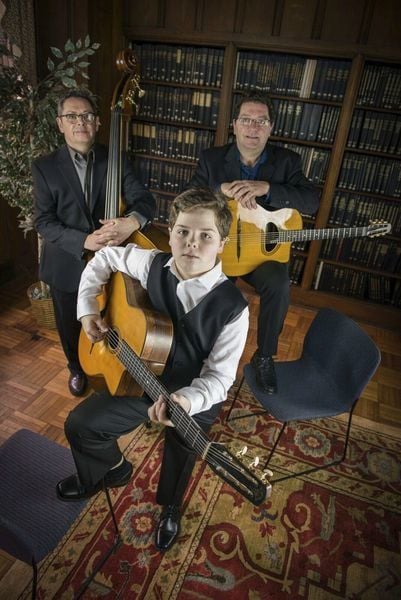 Courtesy photoThe Henry Acker Trio, led by teen guitarist Henry Acker, will perform Tuesday, April 17 at Jocko's Jazz at the Sahara Club and Restaurant in Methuen.In front is Henry Acker, 13, and from left are Dana and Victor Acker.

Courtesy photoHenry Acker, a natural at guitar, joins his father and uncle for a night of gypsy jazz on Tuesday, April 17 at Jocko's Jazz at the Sahara Club and Restaurant in Methuen.

Courtesy photoThe Henry Acker Trio, led by teen guitarist Henry Acker, will perform Tuesday, April 17 at Jocko's Jazz at the Sahara Club and Restaurant in Methuen.In front is Henry Acker, 13, and from left are Dana and Victor Acker.

The emcee's eyebrows lifted when he learned a 13-year-old was sitting in on guitar with the Jason Anick Quartet last fall.

But after the last note in the first set, emcee and Jocko's Jazz night founder Bob "Jocko" Arcidiacono beat feet to catch young Henry Acker before he bounded out the door with his mom.

"Where you going?" Arcidiacono said, catching his breath. "His mother said, 'He's got school in the morning.'"

This time, Arcidiacono has hired the teen to play The Sahara Club and Restaurant, in Methuen, during school vacation.

One Tuesday, April 17, he will headline the show, The Henry Acker Trio. That's Henry and his father, Victor, and his Uncle Dana, who will play their signature gypsy jazz on the cabaret stage.

"We’ll play a combination of Django Reinhardt tunes like 'Minor Swing,' 'Belleville,' 'Nuages' and some recognizable jazz standards like 'Caravan,' 'Night and Day' and 'After You’ve Gone,' Henry said. "We do some really quick barn burners like 'Cherokee' and 'Dark Eyes.' We’ll even play a couple of my own compositions."

Henry is enamored of Reinhardt, the 20th century's most complete and expressive guitarist in the estimation of many.

Reinhardt was self-taught. He played on the streets of Paris as a child. At 18, he was badly burned in a caravan fire and learned to play guitar with two fingers and his thumb, forging a style in which every note, no matter how fast, had personality.

"The music is beautiful, familiar songs and we are very proud of the arrangements," said Victor Acker, looking ahead to the concert. "There are many spots in the show that will blow your hat right off. It will definitely put a smile on your face."

Victor Acker has played guitar for 48 years, but he said his son surpassed him, musically, by the age of 12.

As a young child, Henry loved to listen to and watch his father rehearse his traditional jazz band at home. One time, when Henry was about 8, he walked over to a stand where the second guitarist had placed his instrument. The boy picked it up and played a mature, sophisticated and fast run.

"Completely out of nowhere," Victor Acker said. "Like a light switch just went on. Everyone in the room gasped. Soon after, I got him his own guitar."

The father and son are consumed by music. They always talk about guitar licks, show each other new exotic chords, and listen to and play music.

Arcidiacono, a lifelong jazz aficionado dedicated to keeping the music alive, was worried that night last fall when he found out the teen on stage was with the band. Then he heard him play.

"The kid blew everybody away," Arcidiacono said.

Where do you and your Uncle Dana live?

I live in Duxbury. Uncle Dana lives in Boston

How many times do you play a month?

During the school year, I have to keep the gigging to about once or twice a month. We spend a lot of that time rehearsing the show for the next year. During the summer, we play three or four times a week all over New England and beyond. We are in Seattle in September.

The Sahara is such a cool venue. It’s a serious jazz club with a lot of serious jazz artists on the bill. The audience is so attentive and happy to be there. They are the type of audience that every musician wants to perform for.

What is gypsy jazz?

The gypsy jazz that I play is the musical style that Django Reinhardt started in the 1930s in Paris. He not only did his own compositions, but he interpreted American jazz in his own unique style. The bands are usually made up of a couple of acoustic guitars, a violin and a double bass. No drummers. The groove is called La Pompe. The rhythm guitar player becomes the drummer with his strum. It is very close to the right-hand cymbal playing of a jazz drummer. It is so amazing when everyone gets locked into it. I just want to take off and fly when it really gets going.

What's it like playing with your dad and uncle?

It’s fantastic! We have a much tighter bond than we would have if we weren’t related. My favorite part is when the music is swinging really hard and I look up to see the other guys smiling.

What are some of your other interests?

I like traveling to new places, especially to jazz festivals that I am invited to play in. I love going to the beach and looking for wildlife in the ocean.

What do you want to do as an adult?

I want to be a musician and tour the world. Some people in the jazz community don’t want me to wait that long.

What do your friends think of your music?

All of my friends are musicians and most are in the gypsy jazz community. They are all really supportive and very excited that I have some really great gigs, Jocko’s Jazz included.

Who are some of your favorite musicians?

Bireli Lagrene, Olivier Kikteff, Benoit Convert, Julian Lage. Most of the musicians I like are European guys that not a lot of people know here in the U.S. They are really some of the greatest guitar players in the world. People should really check them out.

What do you think about the trio's name? The Henry Acker Trio?

It was my dad’s idea. I like it! It seems so weird to see it on marquees. We shortened it from The Henry Acker Gypsy Jazz Trio, which was a mouthful.

What: The Henry Acker Trio

ABOUT CHECK THIS OUT

Check This Out is a weekly feature where we highlight places in our region to go for art, dance, history, music, poetry or other cultural entertainment. Got an idea for a Check This Out? Email Terry Date at tdate@northofboston.com.