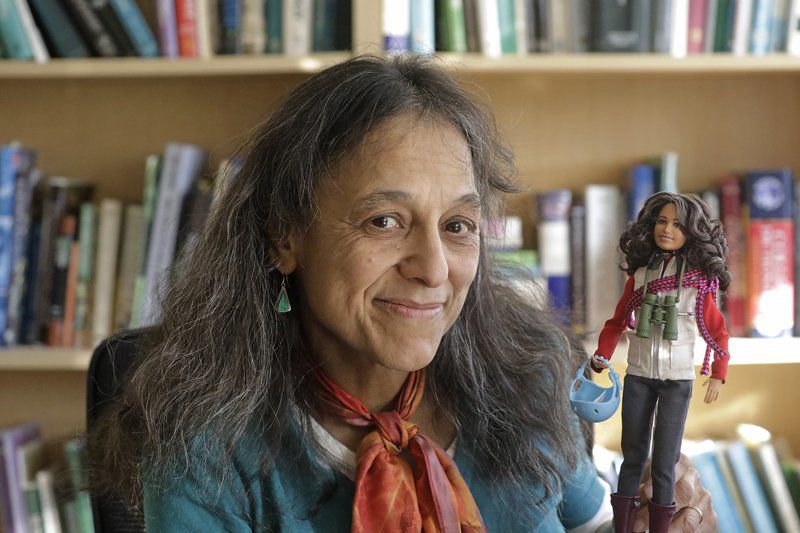 Associated PressEcologist Nalini Nadkarni holds a Barbie doll that Mattel created to look like her when she’s climbing into the treetops to study the rainforest canopy. Nadkarni has long created her own “Treetop Barbies” and has now helped Mattel and National Geographic create a line of dolls with careers in science and conservation. 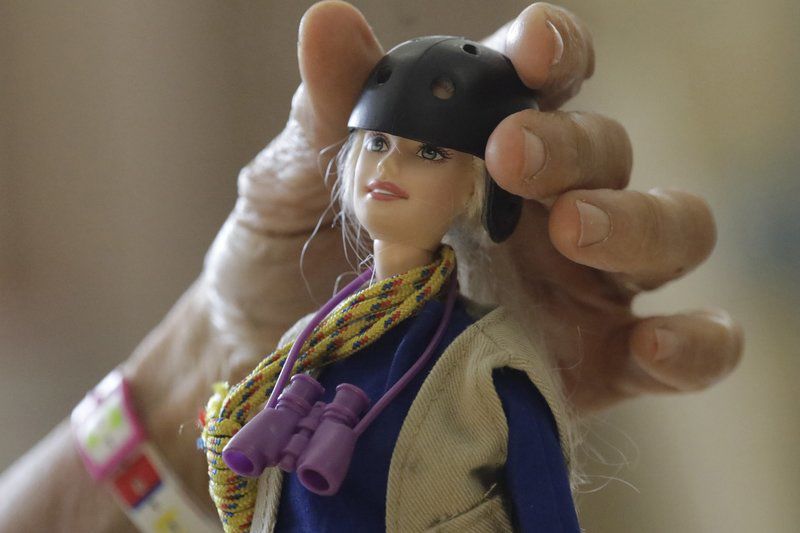 Ecologist Nalini Nadkarni’s “Treetop Barbies” are outfitted with miniature versions of her own gear.Associated Press 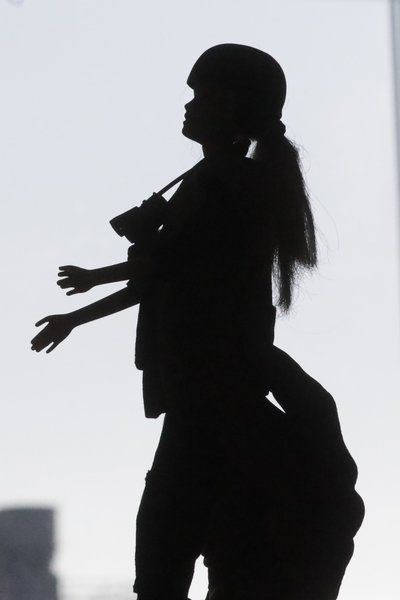 Associated PressOne of Nalini Nadkarni's "Treetop Barbies" is silhouetted on the University of Utah campus in Salt Lake City.

Associated PressEcologist Nalini Nadkarni holds a Barbie doll that Mattel created to look like her when she’s climbing into the treetops to study the rainforest canopy. Nadkarni has long created her own “Treetop Barbies” and has now helped Mattel and National Geographic create a line of dolls with careers in science and conservation.

Ecologist Nalini Nadkarni’s “Treetop Barbies” are outfitted with miniature versions of her own gear.Associated Press

Associated PressOne of Nalini Nadkarni's "Treetop Barbies" is silhouetted on the University of Utah campus in Salt Lake City.

When Nalini Nadkarni was a kid, she’d run home from school, climb into one of the eight maple trees in her parents’ backyard, and spend an afternoon there with an apple and a book.

That time in the treetops set the tone for the rest of her life: She’s now a forest ecologist at the University of Utah who’s dedicated her career to studying rainforest canopies.

She’s also always looking for new ways to get people interested in science, from fashion made with nature imagery to science lectures at the state prison.

“I’ve tried for years and years to bring the science I do and understand to people outside of academia,” she said.

Her childhood memories made her particularly interested in reaching children. After her own 6-year-old daughter asked for a Barbie, Nadkarni decided to refashion the iconic doll as a scientist-explorer in rubber boots rather than high heels.

“Lots of girls, and some little boys, love Barbie,” Nadkarni said. “It’s almost aspirational, they want to be Barbie.”

That was about 15 years ago. Nadkarni said that Barbie maker Mattel wasn’t interested in the idea then, so she decided to redo dolls herself, using gear she collected.

She scoured thrift stores and eBay for Barbie dolls and enlisted help from volunteer seamstresses. She called the creation “Treetop Barbie” and began selling them at cost on her website.

Nadkarni joined a team of female scientists advising Mattel as it made the line of dolls that includes a marine biologist, astrophysicist, photojournalist, conservationist and entomologist.

Sales began in the summer. As a thank-you, Mattel sent Nadkarni a one-of-a-kind doll with tree-climbing gear and full dark hair woven with strands of white that made the doll resemble the scientist.

For Nadkarni, the company’s investment in the dolls reflects a broader cultural shift toward recognizing women in science, math and technology that could spark an appreciation for science even among kids who don’t end up entering the field.

Mattel said in a statement that the purpose of Barbie dolls for the last 60 years has been to “inspire the limitless potential in every girl,” pointing out that Barbie was portrayed in other science- and math-based careers long before the new line, including as an astronaut in 1965.

“Barbie allows girls to try on new roles through storytelling by showing them they can be anything and, through our partnership with National Geographic, girls can now imagine themselves as an astrophysicist, polar marine biologist and more,” said Lisa McKnight, general manger of Barbie Dolls for Mattel.

It’s not known, though, how career Barbies might affect kids’ aspirations. A 2014 study by Oregon State University found that girls who played with the dolls told researchers they could do fewer jobs than boys — even if they played with a doctor Barbie.

The study didn’t examine the girls’ reasoning, but researchers speculated that Barbie might be an inherently sexualized doll, said associate professor Aurora Sherman, who worked on the paper.

Putting the same doll in a professional outfit likely won’t do much to change perceptions about what women can do, she said. But it might help to use it as a starting point for conversations about women in science and math.

“Its really going to depend on how that doll is experienced, and what adults are doing to drive home that message,” she said.

Barbie’s icon status gives the doll cultural sway, and the new dolls have the potential to normalize the idea of women in science and engineering, said Kris Macomber, a sociology professor at Meredith College in Raleigh, North Carolina.

Barbie sales have been increasing as the becomes available in different body shapes and careers, but there’s only so much a toy can do to change broader attitudes about what professions chosen by girls as they grow up, she said.

“Barbie does not hold all the power to change culture,” Macomber said. “But it does contribute.”