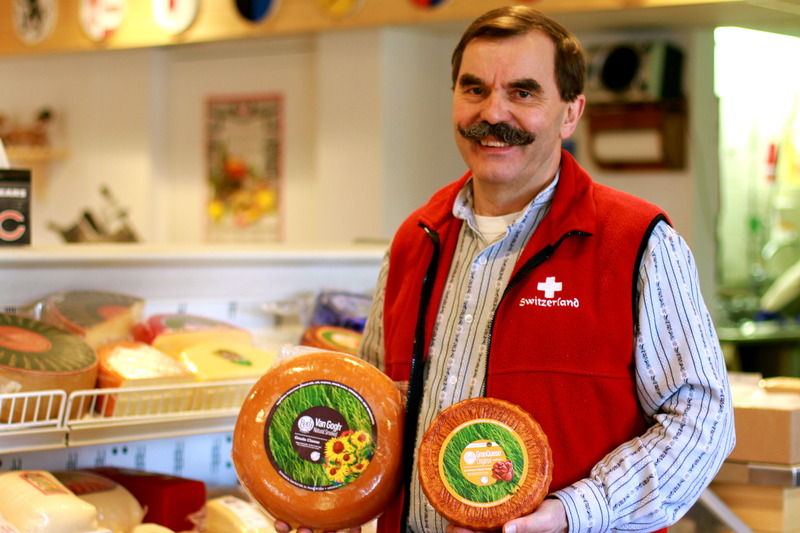 Owner Tony Zgraggen at the Alp and Dell artisanal cheese store in Monroe, Wis. The store is one of the few places in the area where Limburger cheese, famous for its smell, can be bought. AP photo 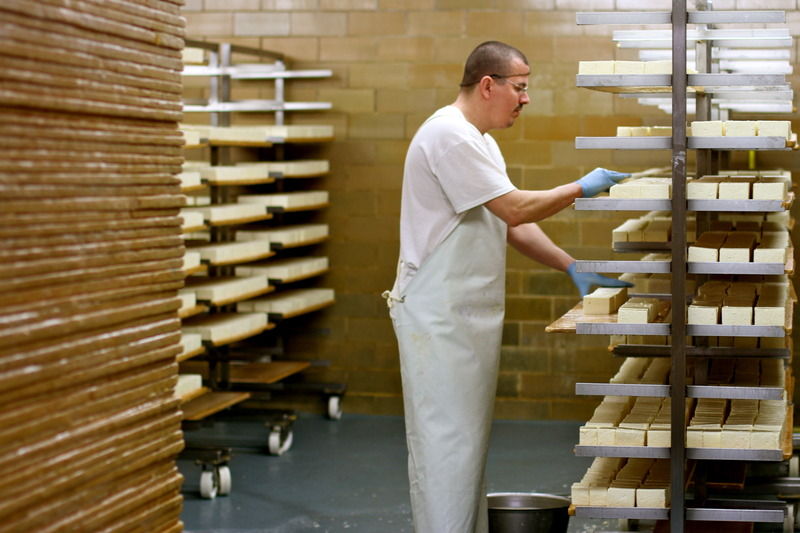 Cheesemaker Brian Engesser smears bricks of Limburger cheese with a 100-year-old bacteria that makes the cheese mature, and produces the famed smell at The Chalet Cheese Cooperative. 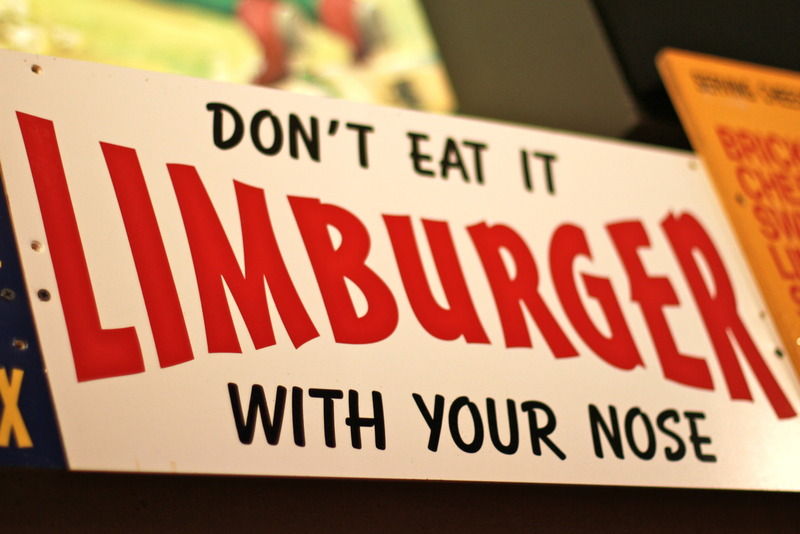 A sign above the bar in Baumgartner's Cheese Store and Tavern in Monroe, Wis. The sign warns diners about the famed "stinky cheese."

Owner Tony Zgraggen at the Alp and Dell artisanal cheese store in Monroe, Wis. The store is one of the few places in the area where Limburger cheese, famous for its smell, can be bought. AP photo

Cheesemaker Brian Engesser smears bricks of Limburger cheese with a 100-year-old bacteria that makes the cheese mature, and produces the famed smell at The Chalet Cheese Cooperative.

A sign above the bar in Baumgartner's Cheese Store and Tavern in Monroe, Wis. The sign warns diners about the famed "stinky cheese."

The sign above the bar in Baumgartner’s Cheese Store and Tavern warns visitors about the perils of sampling the $3.25 house specialty — a slab of Limburger cheese on rye bread slathered with onions and mustard.

“Limburger: Don’t eat it with your nose.”

The sign might well add: Don’t eat it in close proximity to anyone you wish to remain friends with.

Monroe is a tranquil town of 10,000 nestled in the rolling hills of southern Wisconsin, where pale brown cows gaze soulfully from fields and silos dot the landscape. Settled by Swiss and German immigrants, it boasts a brewery, a cheesemaking museum, and a historic town square dominated by a 1891 Romanesque-style courthouse with a clock tower and bell that chimes on the hour.

This charming place is also home to the stinkiest cheese in the world.

In 1880, Limburger, which is smeared with a foul-smelling bacteria to make it age quickly, was described by local author John Luchsinger as “a premeditated outrage on the organs of smell.” Mark Twain wrote about “a most evil and searching odor” in his 1882 tale, “The Invalid’s Story.” In the 1918 silent movie “Shoulder Arms,” Charlie Chaplin played a soldier at the front who, after opening a package of Limburger, flings it into enemy lines, forcing the Germans to surrender.

And in 2011, comedian Daniel Lawrence Whitney — also known as “Larry the Cable Guy” — spit out a Limburger sandwich at Baumgartner’s while filming for the History Channel, declaring — with a string of colorful expletives — that it tasted like a dead possum.

But here in Monroe people love it. They take enormous pride in the fact that their town is the only place in the country where Limburger is still produced. It’s also the only place to have its own master Limburger cheesemaker — Myron Olson, 60, who started working in the Chalet Cheese Cooperative at age 17 and has managed the plant for more than two decades.

“It takes time, but it grows on you,” Olson says wryly, of the pungent, ammonia-like stench wafting through the plant, where huge vats of steaming curds eventually become blocks of Limburger. Employees then rub the fresh blocks by hand on aged pine boards coated in the prized 100-year-old bacteria that is recycled daily to ensure the flavor stays true. Visitors can’t tour the plant but there is a small store.

The washed-rind cheese, made from cow’s milk, was first concocted by 19th century monks in the Duchy of Limburg, an area now divided among Belgium, Germany and the Netherlands. Later in New York, Limburger sandwiches became a favorite working man’s lunch, cheap and nutritious and usually washed down with a glass of beer. Prohibition hurt sales of the smelly cheese as much as sales of beer and production of Limburger dwindled. The Monroe cooperative now makes about 700,000 pounds (317,514 kilograms) a year.

Olson, the master cheesemaker, introduces a visitor to the cheese gently. He offers a small piece of week-old Limburger on a cracker with strawberry jam. It’s mild and crumbly, the texture of feta. At two months, it’s rich and creamy, resembling brie. At six months, after fermentation has kicked in, it assaults the senses with an odor so overpowering that to compare it to smelly feet seems too kind. (In 2006 a study showing that the malaria mosquito is attracted equally to the smell of Limburger and to the smell of human feet won a prize called the Ig Nobel, a parody of the Nobel prize, awarded for humor as much as science.)

“Limburger is a cheese lover’s cheese,” says Tony Zgraggen, who sells 8-ounce (227 grams) blocks of the stuff for $4.99 at the Alp and Dell, a wonderful artisanal cheese store in Monroe next to the Emmi Roth Kase cheese plant, which produces 38,000 pounds (17,236 kilograms) of cheese — Gruyere, baby Swiss, blue and havarti — a day.

Here visitors can watch various stages of cheesemaking from a viewing room above the factory floor (the plant doesn’t make Limburger, so it’s easy on the nose). If they are lucky, they might also be treated to a tour— and perhaps some yodeling — from Zgraggen, who is as passionate about his native Switzerland as he is about cheese.

“Cheese is a living thing,” he cries, caressing a foil-wrapped block of Limburger. “It doesn’t have a soul, but other than that, it’s alive.”

A bit too alive for many folks outside Monroe.

In 1935 a mail carrier in Independence, Iowa, became so overcome by the odor emanating from a package of Limburger (prescribed by a doctor for a patient with dyspepsia) that the local postmaster banned it from being delivered. That so infuriated the postmaster from Monroe that he challenged his counterpart to a “sniffing duel” in Dubuque — one vigilantly covered by the newspapers of the day. “Limburger: Fragrant in Monroe; Putrid in Iowa” ran a headline in the March 6, 1935, issue of the Milwaukee Journal. A week later a column in the Independence Conservative poked fun at the good people of Monroe “who think that the world is just a glib, flat Limburger cheese surrounded by an ocean of lager beer... Bankers line their pockets with it, strong men swear by it and babies smell like it.”

The “Duel of Dubuque” was settled amicably when the Independence postmaster admitted that he didn’t possess a sense of smell.

Still, Limburger continued to be maligned in movie, comic strip and song. It has featured in comedy sketches by the Three Stooges, Daffy Duck and Abbott and Costello — all involving characters collapsing whenever they came into contact with the Limburger fumes.

At Baumgartner’s Tavern, where Limburger sandwiches are served with a mint on top (for others at the table, staff say), some newcomers still nearly collapse when they get their first whiff. On a recent Saturday, Eric Englund, a 30-year-old traffic maintenance worker from Dixon, Ill., ordered the house specialty, boasting that his stomach could handle anything. Tactfully, the waiter brought a tiny sample on a toothpick with lots of mustard and a batch of mints. And still Englund grimaced, clutching his stomach and pretending to throw up as he howled, “It tastes like catfish bait.”

“And it smells like your rotten black socks,” said his wife, Amber.

At the bar, Bob Sadterlee, a 70-year-old welding equipment salesman from Rockford, Ill., nodded philosophically about such reactions, which are fairly common in Baumgartner’s.

“Limburger is like a martini,” said Sadterlee, who loves the stinky cheese but treats himself only when he’s not meeting with clients.

“It takes time to acquire the taste.”