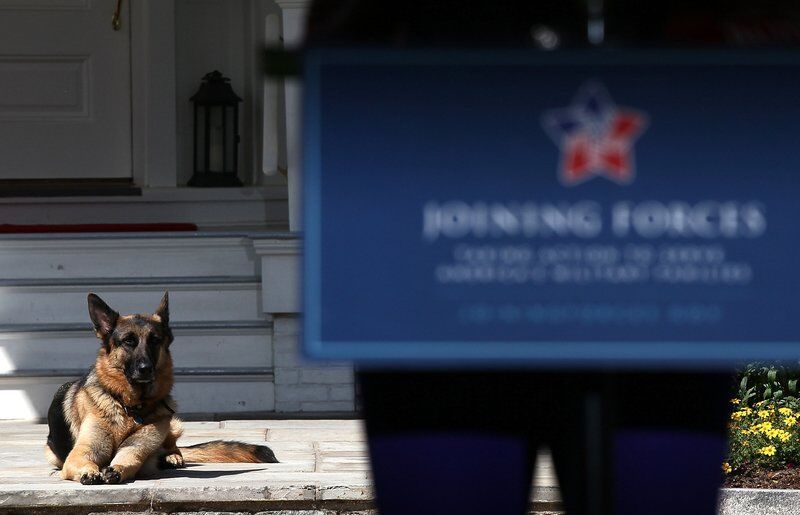 Joe Biden's dog, Champ, lies down during a Joining Forces service event on May 10, 2012, at the then-vice president's residence at the Naval Observatory in Washington, D.C. (Win McNamee/Getty Images/Tribune News Service) 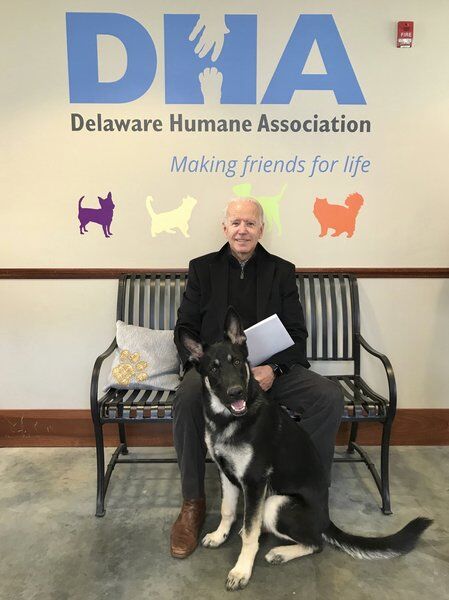 Joe Biden's dog, Champ, lies down during a Joining Forces service event on May 10, 2012, at the then-vice president's residence at the Naval Observatory in Washington, D.C. (Win McNamee/Getty Images/Tribune News Service)

Of the more than 500 million Americans who've ever lived, fewer than four dozen have ascended to the presidency.

It's hard to relate to a group that exclusive. But pets that dig up the Rose Garden, chew tassled loafers in the West Wing and have accidents under the Resolute Desk are the great equalizer: There are more Americans who live with animal friends — around 66%, studies show — than those who don't.

"Pets humanize presidential figures who seem remote," said Andrew Hager, historian-in-residence at the Presidential Pet Museum, formerly in Williamsburg, Virginia, now awaiting a new home. "Seeing the most powerful person in the free world romping on the floor with a dog looks so much more like you or I — a very different image than a person in a suit behind a podium."

When he moves into the White House in January, the already avuncular President-elect Joe Biden will morph into Romper-in-Chief, cavorting with two German shepherds, 12-year-old Champ and nearly 3-year-old Major, who will become the first shelter animal to live at 1600 Pennsylvania Avenue. Biden and his grandchildren picked out Major at the no-kill Delaware Humane Association in Wilmington in 2018.

For the last four years, the White House has been a kibble-free zone.

"Donald was not a dog fan," wrote the outgoing president's first wife, Ivana, in her memoir, "Raising Trump." "And Chappy (her poodle) had an equal dislike of Donald."

Donald Trump is believed to be the only president other than James Polk (in office from 1845 to 1849) not to have a pet, Hager said, adding, "Even the impeached, sad, racist, drunk Andrew Johnson fed flour to mice friends he kept."

In February 2019, the famously germaphobic president said his getting a pet "feels a little phony."

For Biden, a longtime pet lover, it seems natural.

Major was one of six puppies brought to the Delaware shelter after being exposed to "something toxic," said Cory Topel, the facility's marketing manager, who did not specify the substance.

"We worked with a local veterinarian emergency center for life-giving medical care," she said.

That story was shared on social media, where Biden's daughter, Ashley, read it and alerted the family.

After Biden and the grandchildren made their choice, Biden ventured in "alone on a random Sunday, like anyone else," to adopt the dog, Topel said. "He ended up staying an hour talking to everyone about dogs he had growing up."

Biden also spoke about Champ, purchased from a Pennsylvania breeder.

Champ was a nickname Biden's father had conferred on him growing up. Major could well be named after Biden's late son, Beau, a major in the Delaware National Guard, Topel speculated.

"We can't wait to see photos of Major when he's in the White House," Topel said.

The animal already starred in Instagram videos during the presidential campaign, assuring us that Biden had "no ruff days on the trail."

Drunkard and other pets

The fascination Americans will have with the Biden dogs is easy to predict. We've long obsessed on animals close to our presidents.

George Washington, who had a dog named Drunkard, hankered for better fox hounds to aid his hunts, so he crossed French fox hounds gifted to him by his Revolutionary War ally the Marquis de Lafayette and created the breed of American fox hounds we know today, Hager said.

Abraham Lincoln enjoyed the first presidential cats. John F. Kennedy kept one, but his severe allergies forced him to give the animal away. Bill Clinton owned the famous domestic shorthair Socks and a chocolate Lab named Buddy.

Teddy Roosevelt, who collected maybe two dozen animals on the White House grounds, had a horse that someone helped ride an elevator up to the residence's second floor.

During World War I, Woodrow Wilson dispatched his gardening staff to the European battlefront and replaced them with a flock of sheep to trim the White House lawn. He also owned a ram that ate reporters' cigar butts and became addicted to chewing tobacco.

Though first lady Eleanor Roosevelt had a horror of animals in the White House, President Franklin D. Roosevelt nevertheless pampered his Scottish terrier Fala, formally named Murray the Outlaw at Falahill. Nearly as famous as FDR himself, Fala slept in the president's bed and could not be fed by anyone but him. A bronze sculpture of the Scottie — the only presidential pet honored with a statue — sits in the FDR Memorial in Washington.

Lyndon Johnson kept a terrier mix named Yuki that his daughter found at a gas station. Richard Nixon clung to his poodle Vicky the night before he resigned. Barack Obama played often with his Portuguese water dogs, including Bo, known for making appearances on TV shows such as "Late Night With Jimmy Fallon" and "The Ellen DeGeneres Show."

One can already imagine the future children's books "written" by the Bidens' barking duo in the tradition of past White House pet authors and essayists such as Millie, Barbara Bush's English springer spaniel. Beyond that, there will doubtless be endless Instagram pooch posts and photo ops with German Chancellor Angela Merkel picking canine hair off her skirt.

In fact, a picture book about Champ and Major is set to publish on Jan. 19. It was written by National Book Award longlist nominee Joy McCullough and illustrated by Sheyda Abvabi Best.

“I learned to love dogs during an extremely difficult time, and have had one in my life ever since,” McCullough said in a statement. “Their boundless devotion, affection, and unconditional love is essential to my mental health. My pets have always been (and always will be!) rescues, and I was delighted to learn that with President Biden’s election, there will finally be a rescue dog living in the White House. I celebrated by writing this story!”

Ultimately, dogs allow any human to seem more likable, said Mary Rautkis, a social work professor at the University of Pittsburgh and an expert on how pets make people healthier. "A person who owns dogs is connectable. Dogs give people social capital, and a trustworthiness."

Along with making presidents seem compassionate, playful and understanding, pets can serve the very practical purpose of reducing stress, said Aubrey Fine, a Claremont, California, psychologist who has conducted 47 years of research on human-animal interactions.

"When people turn to animals, cortisol levels reduce," Fine said. "When you pet an animal, you just relax."

And, he said, the president-elect's psyche will be further assuaged by animal lovers who'll adore him for choosing a shelter animal.

"Dogs in shelter are lives worth saving," Fine said. "That's a great commentary on Mr. Biden."

Though the president-elect has overcome tragedy and travail to reach his lofty post, Topel of the Delaware Humane Association reminds us of the true star of this Wilmington-to-White House tale.

"Major's is a truly rags-to-riches story from the perspective of a shelter dog," she said. "I hope this will inspire people to do shelter adoption."

Fine agreed: "Like shelter dogs, we all need a second chance. And for all of us, presidents or not, animals are good for our souls."