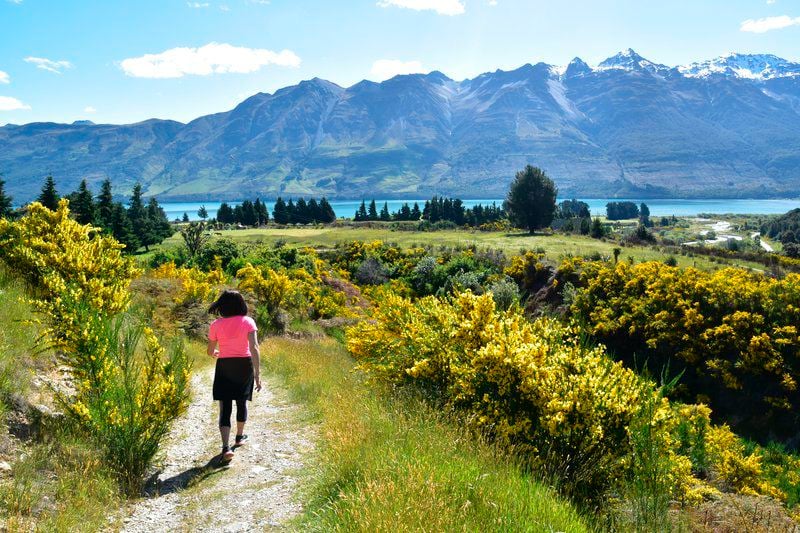 Associated PressA hiker descends from Mount Judah on a trail lined with wildflowers near the town of Glenorchy, New Zealand. 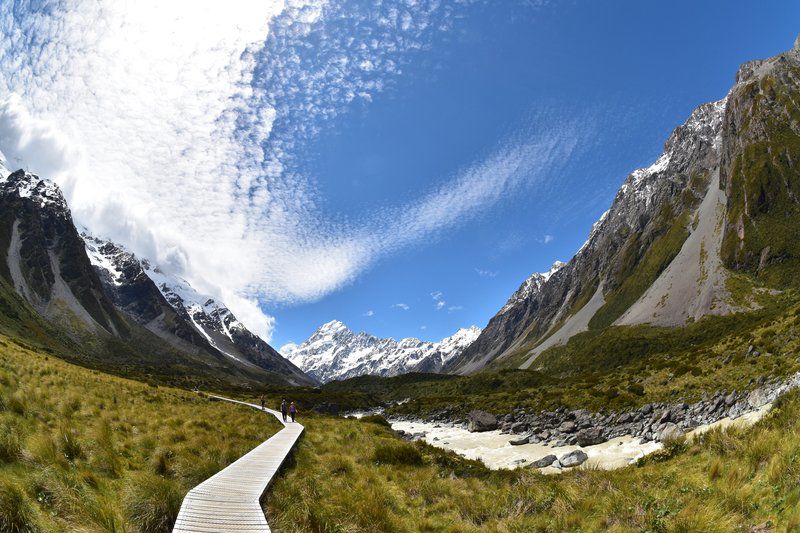 Associated PressThis photo taken with a fisheye lens shows Mount Cook and a boardwalk section of the Hooker Valley Track that leads to Hooker Glacier on the South Island of New Zealand. 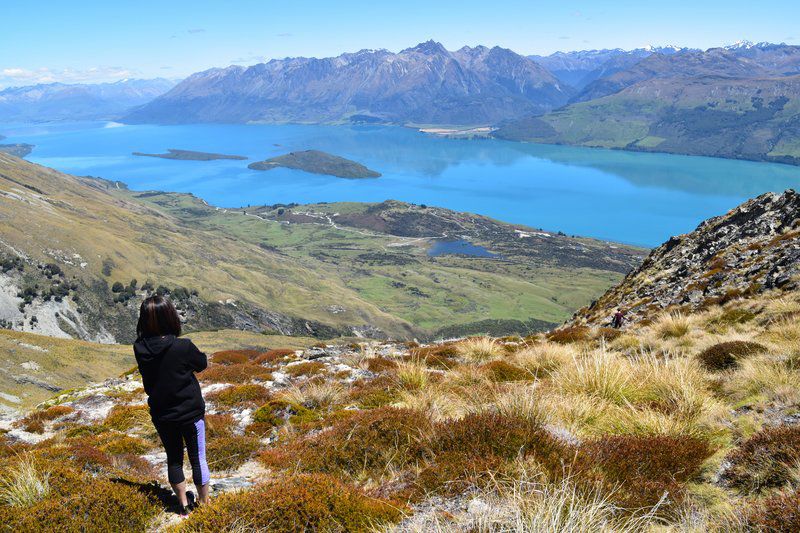 Associated PressLake Wakatipu is viewed from the top of Mount Judah, a small mountain near Glenorchy, New Zealand. 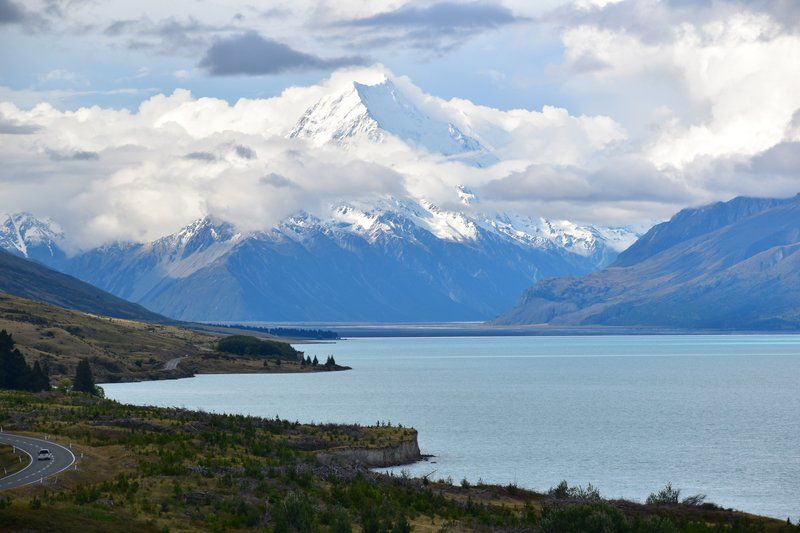 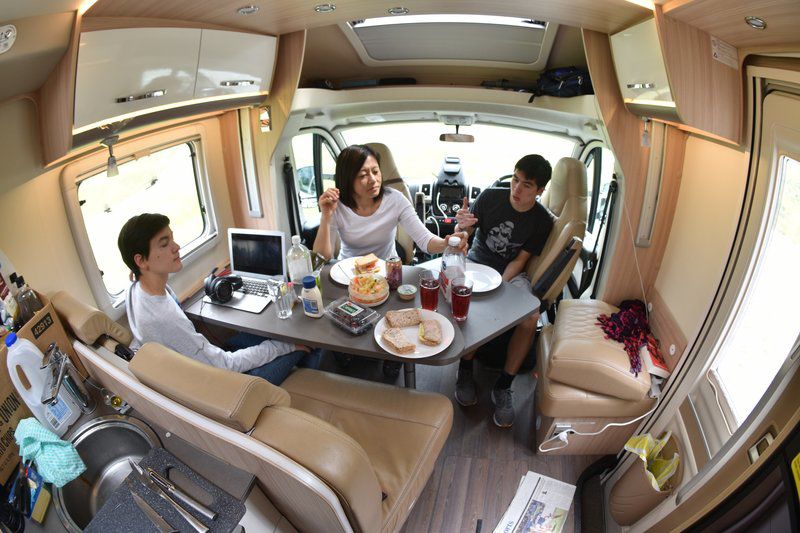 Associated PressThe Foster family eats lunch in their rented camper van at a roadside stop on the South Island of New Zealand. Touring in a camper van is a popular way for tourists to see the country. 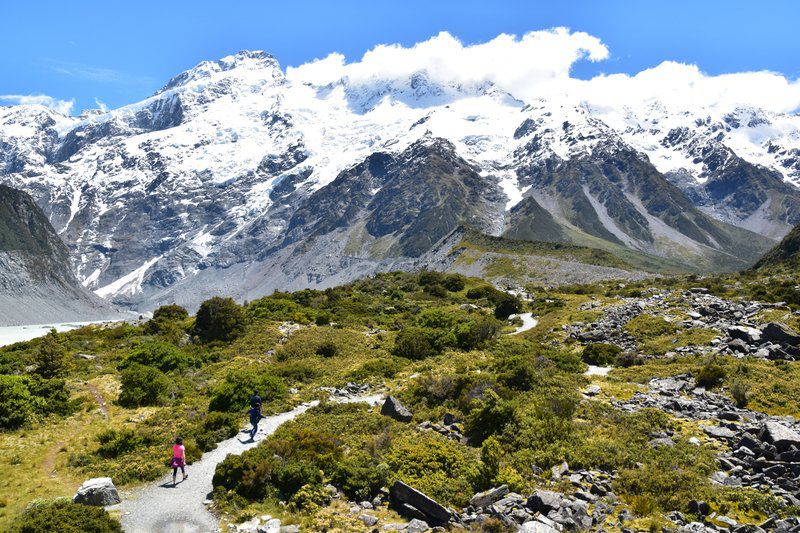 Associated PressThe Hooker Valley Track leads to the base of the Hooker Glacier at the bottom of Mount Cook, New Zealand’s tallest mountain, also known as “Cloud Piercer."

Associated PressA hiker descends from Mount Judah on a trail lined with wildflowers near the town of Glenorchy, New Zealand.

Associated PressThis photo taken with a fisheye lens shows Mount Cook and a boardwalk section of the Hooker Valley Track that leads to Hooker Glacier on the South Island of New Zealand.

Associated PressLake Wakatipu is viewed from the top of Mount Judah, a small mountain near Glenorchy, New Zealand.

Associated PressThe Foster family eats lunch in their rented camper van at a roadside stop on the South Island of New Zealand. Touring in a camper van is a popular way for tourists to see the country.

Associated PressThe Hooker Valley Track leads to the base of the Hooker Glacier at the bottom of Mount Cook, New Zealand’s tallest mountain, also known as “Cloud Piercer."

We crested a hill on the winding lakeside road, and there it was: Middle-earth.

Rugged, snow-capped mountains glowed in the setting sun, and dappled green pastures tumbled down to the water’s edge. White peaks soared in the distance. The Misty Mountains, perhaps?

It was past 8 p.m. in late December — summer in New Zealand — and our family was on day four of an eight-day camper van adventure around the South Island. We were headed to a campground in Glenorchy, a village at the northern tip of Lake Wakatipu, where several scenes from “The Lord of the Rings” movies were filmed. It is one of the most unspoiled, magically beautiful places I’ve ever been.

We had just left the picturesque, if touristy, extreme-sports mecca of Queenstown, where commercial bungee jumping started (no, we didn’t try that).

A New Zealander friend had recommended we stay in the quieter, more pastoral Glenorchy, and I’m glad we did. We spent two nights at a charming campground with hot showers and a pleasant communal kitchen. It ended up being the highlight of a trip filled with breathtaking beauty and memorable experiences.

Our 800-mile loop south from Christchurch, the South Island’s biggest city, took us through countryside that at turns reminded me of Scotland, Switzerland, northern Japan and the U.S. Southwest. We drove past craggy mountains, lush forests, huge barren hills dotted with scrub brush, and green pastures with lots and lots of sheep. We stopped at milky blue lakes whose hue comes from “glacial flour,” rock sediment ground up by glaciers. We hiked through meadows, past rushing streams and huge bushes of yellow wildflowers. The sun set around 9 p.m., giving us gloriously long days to explore. We didn’t want to leave.

Touring in a camper van gave us flexibility to go at our own pace and stop where we wanted. It’s a popular way for both Kiwis (as New Zealanders call themselves) and international tourists to see the country.

New Zealand has a well-organized network of campsites. Some are spartan, with just public toilets and access to water, while others have hot showers, washing machines, shared kitchens and barbecue grills.

Campsites are largely divided between “powered sites,” where you can hook up your van to an electrical outlet, and those without power.

Renting a camper van isn’t cheap, but you save on lodging and dining since you’re in a home on wheels. You’re also paying for the freedom of movement. The most basic campsites are free, and many others cost between 10 and 25 New Zealand dollars (U.S. $7-$17) per person per night. Apps such as Campable and CamperMate provide helpful information.

Traveling in a camper van was something our two teenage sons had wanted to try since watching the “Ben 10” cartoon show, in which the hero’s grandfather drove around in his RV, “Rust Bucket.”

Our 29-foot-long vehicle — a Fiat truck refitted by Germany’s Burstner — was no rust bucket; it was clean, convenient and operated smoothly, although space was tight. It had two double beds, one in a back room that included a toilet and shower, and another that descended from the ceiling of the front cabin with the push of a button.

It also had a tiny kitchen with three gas burners, a sink and a small refrigerator. The front two seats swiveled around to face a table behind which the other two members of our family sat while driving and for meals. We also ate at picnic tables or communal dining areas, where we heard French, German, Hebrew and other languages.

Every other day, we dropped by a “dump site” to dispose of toilet waste and “gray water” (sink waste water). Our boys helped with the dumping duties, and the experience taught us all to be more aware of our daily water, energy and waste needs — things we take for granted at home.

I found the vehicle easy to drive, although extra caution was needed going around corners. Driving on the left may be challenging for some, as well as using the roundabouts, or traffic circles, that are common in New Zealand.

It quickly became clear that my initial route, which included a run out to Milford Sound, was overly ambitious, so we scaled back. Instead of covering a lot of ground, we spent more time savoring fewer locations, and that proved to be the right call.

After a long international flight and connection in Auckland, we picked up the camper van near Christchurch airport in the afternoon and got a helpful explanation about how everything worked. (There are many rental companies, including Maui, Jucy and Wilderness Motorhomes, which we used and liked.)

After stocking up on groceries, we drove a couple of hours inland before weariness prompted me to pull into a simple roadside campsite just as it began to rain. We paid the on-site manager, cooked a simple dinner in our vehicle and soon fell asleep in our beds as the wind whistled outside.

As we approached Mount Cook, its huge white peak suddenly emerged from a break in the clouds, rising starkly from the flat land. We spent two nights at Glentanner Park Centre, a powered campsite with nice facilities and views of Mount Cook and surrounding peaks.

We had glorious weather the next day for an easy hike along a popular trail beneath snow-capped ridges to near the bottom of the shrinking Hooker Glacier, at the foot of Mount Cook.

How many days a week do you get clear skies like this? I asked a park official. Maybe one, he said.

We hiked beyond the end of the trail, clambering over rocks toward the glacier — which appeared gray, like dirty ice at the end of winter — and stopped at a little hill where my son built a cairn and my wife sunbathed on a boulder.

I thought that experience would be hard to beat, but Glenorchy topped it.

As we drove south past river valleys and vineyards to Queenstown, set on a tiny inlet of Lake Wakatipu, the late afternoon sun cast an enchanting light on the rugged mountains across shimmering water.

After driving through town, filled with tourists and chic apartments, we stopped at a little beach where our boys skipped rocks and played with driftwood.

Hopping back in the camper van and driving to Glenorchy on a road hugging the lake, we crested a hill about a half-hour later for a breathtaking view that made me smile: We’re spending the night in Middle-earth.

Actually, we stayed at Mrs. Woolly’s Campground in the middle of the little town. It had a clean communal kitchen and pleasant indoor/outdoor eating area. A seven-minute hot shower cost NZ $2, and there was a cute gift shop next door.

We traveled at Christmastime, when lots of other camper vans are on the road, so I reserved a couple of campsites online ahead of time, including this one. Otherwise, we found space at sites along the way.

Lake Wakatipu is too cold for swimming, but you can rent kayaks and bikes, go parasailing or hire a helicopter to fly you over the peaks and lake. Or just go for one of the area’s many scenic walks. Some outfits offer tours of locations where scenes from “The Lord of the Rings” and “The Hobbit” movies were filmed.

Our family took a memorable hike up nearby Mount Judah. Under cloudless skies, we walked up a trail lined with yellow wildflowers. This expedition turned into our own mini “Lord of the Rings” adventure when the trail led away from the summit, prompting us to bushwhack the final third, up a steep slope of grassy underbrush to the top. (New Zealand has no snakes or large wild mammals, although we did encounter some goats.)

From the summit, we were rewarded with stunning views of Lake Wakatipu and craggy, snowcapped peaks in every direction.

After a picnic, we bushwhacked back down to the trail and descended to our camper van in the afternoon sun. During the entire hike, we met six people.

Our travels would go on to include stops at Wanaka, on another lovely lake, and Oamaru, on the east coast, where we encountered small penguins that came ashore at night to sleep. We could hear them squawk from inside our van.

After a fulfilling eight days, we returned the camper van without any mishaps, having gained a new love for this beautiful country and its friendly people — and a renewed appreciation for hot showers, sewage systems and our larger kitchen at home. It was a great way to experience New Zealand and build family memories, and I’m already envisioning my next camper van adventure.