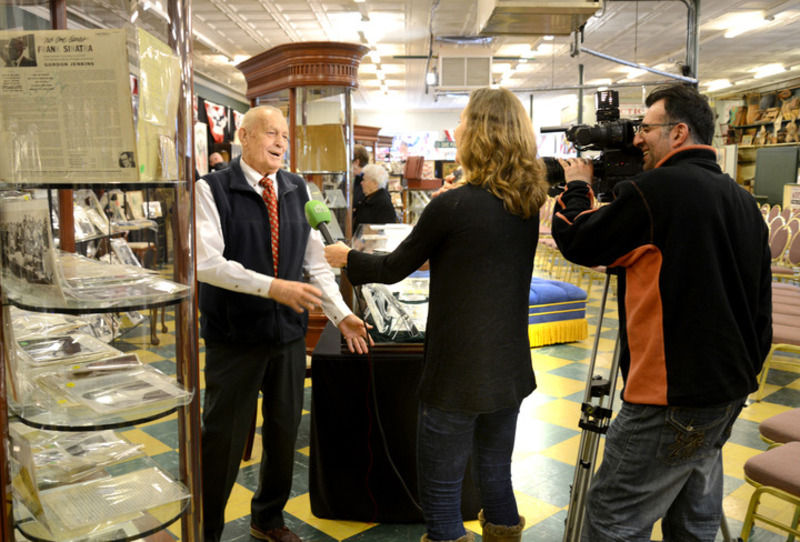 Julia Vassey of Russian Television interviews Charlie Hamilton at a preview of the JFK auction at McInnis Auctioneer in Amesbury yesterday. The auction has gained international attention. 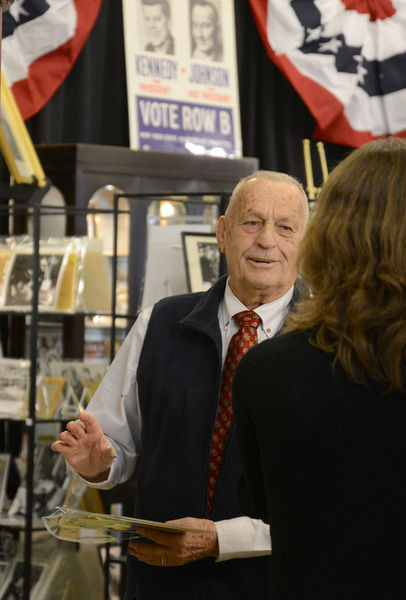 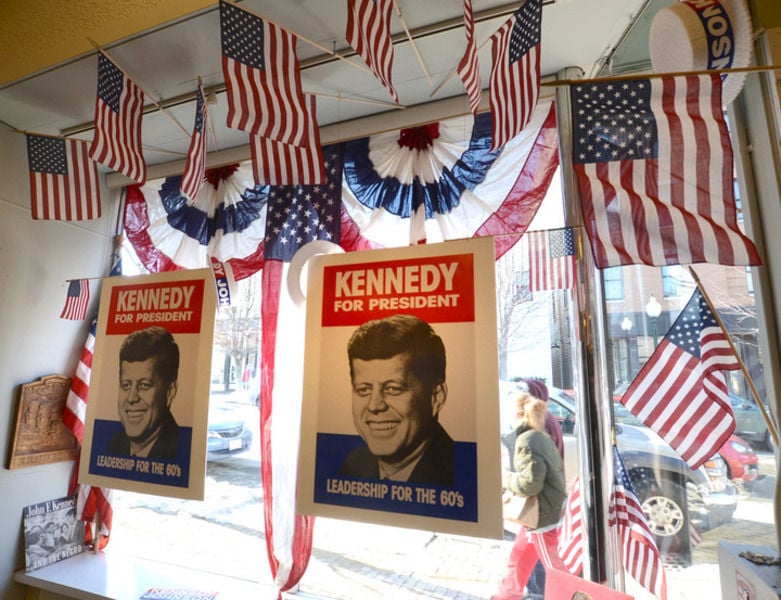 Julia Vassey of Russian Television interviews Charlie Hamilton at a preview of the JFK auction at McInnis Auctioneer in Amesbury yesterday. The auction has gained international attention.

AMESBURY — An extensive collection of John F. Kennedy memorabilia up for bid in Amesbury has garnered international attention, and this week’s preview exhibit has drawn hundreds of people from across the country to John McInnis Auctioneers.

Unlike past Kennedy auctions, this collection gives the public a unique glimpse into the intimate personal life of President Kennedy and his family through the eyes of David Powers, Kennedy’s personal adviser and best friend.

“You can see that this is a real person,” said Dan Meader, an appraiser for McInnis Auctioneers. “It’s not just the legend, the hero, the president, it is a real person, and that’s what shows here.”

Powers, who died at 85 in 1998, was by the former president’s side literally every day of his political career, and after his 1963 assassination he was instrumental in the creation of the John F. Kennedy Library in Boston. He donated thousands of items to the library upon its opening, but kept some of the most personal things to himself.

Those things remained at his home until his family began to clean out the house to sell it, and when it became clear how extraordinary the collection was, the family decided to put most of it up for bid. The auction is scheduled for this Sunday at 11 a.m.

McInnis Auctioneers secured the opportunity to conduct the sale for a variety of reasons, but owner John McInnis said geography was his biggest selling point.

“I said it would be a crime to take this estate from Massachusetts and sell it out of state,” McInnis said. “People are going to want to see this in Massachusetts.”

McInnis and his staff have spent nearly a year since then preparing for the auction, and when word of the sale first broke last month in The Daily News of Newburyport, the media response was overwhelming.

“Since the news broke it’s been rather chaotic,” Meader said. “We’ve had all the major morning talk shows, the ‘Today Show,’ ‘Good Morning America,’ ‘CBS This Morning,’ ‘Fox,’ all wanting exclusives. It tells you the level of this stuff and to have it in Amesbury locally, it’s really a special thing.”

People Magazine also just put out a four-page story about the collection, and word of the auction has even spread overseas. Yesterday a television crew from Russia came to Amesbury to interview McInnis and Meader about the auction.

“We’ve got a tiger by the tail here,” McInnis said. “We never realized that this would get this kind of attention.”

There are over 2,000 photographs, documents, gifts and other items divided into 723 lots up for bid, and each tells its own unique story about the life of the former president, from his early years in politics all the way up to his death, and beyond.

For instance, an early photo from 1938 shows Kennedy with the Harvard Sailing team, while another from 1954 shows Ethel, Jackie and John Kennedy taking a picture of themselves in a mirror — perhaps the original “selfie.” There’s even one of John and Jackie riding on camels in Egypt with the Great Pyramids of Giza rising up in the background.

“Nobody has ever seen that photo before,” McInnis said.

Being elected president didn’t change the human side of Kennedy either. A series of photos from 1962 show the president relaxing in a pool with singer Bing Crosby, and another taken on Halloween night in 1963 shows Kennedy sitting at his desk in the Oval Office with his two children on his lap, one dressed up as a witch and the other as a skeleton.

“That was a month before he was killed,” Meader said. “That puts things into perspective.”

The collection has been on exhibit to the public since the beginning of the week, and so far hundreds of people from all over the country have come to see the memorabilia for themselves. The preview will be running all week from 1 to 7 p.m. and on Sunday from 8 to 11 a.m. before the auction begins.

McInnis said the seating for Sunday’s auction is nearly sold out and hundreds of bids have already been placed on the auction house’s website. McInnis said anyone is welcome to place a bid, whether it’s $50 or $50,000.

As for how much the collection could fetch as a whole on Sunday? McInnis didn’t even want to speculate.

RAYMOND - William Sarofian, of Raymond, N.H., passed away peacefully at the age of 56, May 14, 2020, from heart disease. Bill was born in Haverhill, Mass., and raised In Plaistow, N.H. He worked for many years for his father at Plaistow Drywall. Bill loved fishing especially the Kangamangus …