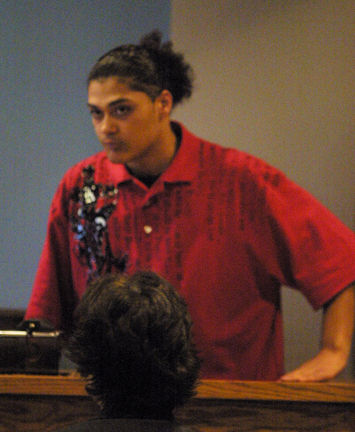 Christopher Mendes, 16, takes the witness stand in Lawrence Superior Court yesterday during the murder trial of Levi Alcantara, 33, of Methuen, who is accused of bludgeoning to death Mendes’ mother, Maria Sastre, in their Washington Street apartment in Lawrence on April 22, 2006. 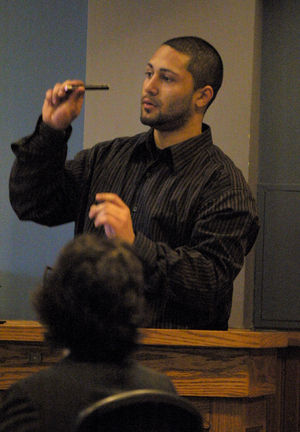 Jim Patten/Staff photo Jesus Mendes, 18, son of Maria Sastre, uses a laser pointer to highlight areas of his home for jurors in the murder trial of Levi Alcantara, 33, of Methuen, who is accused of bludgeoning Sastre to death on April 22, 2006. He is being tried in Lawrence Superior Court.

Christopher Mendes, 16, takes the witness stand in Lawrence Superior Court yesterday during the murder trial of Levi Alcantara, 33, of Methuen, who is accused of bludgeoning to death Mendes’ mother, Maria Sastre, in their Washington Street apartment in Lawrence on April 22, 2006.

Jim Patten/Staff photo Jesus Mendes, 18, son of Maria Sastre, uses a laser pointer to highlight areas of his home for jurors in the murder trial of Levi Alcantara, 33, of Methuen, who is accused of bludgeoning Sastre to death on April 22, 2006. He is being tried in Lawrence Superior Court.

LAWRENCE — Jesus Mendes woke up to his mother's screams early on the morning of April 22, 2006, but thought nothing of it because she often screamed when she saw bugs.

Mendes, now 18, and his brother Christopher, 16, offered powerful testimony yesterday in the Lawrence Superior Court trial of Levi Alcantara, 33, of Methuen, who is accused of murdering their mother, Maria Sastre, in her first-floor bedroom while they slept on the second floor of their home at 55 Washington St.

"I heard her scream the first time and went back to sleep," Jesus Mendes said.

But a few minutes later he woke up again as his red-nosed pit bull, Princess, was licking his face.

"I heard her scream one more time and I went downstairs to her bedroom and I went in the door," Mendes said. "I saw the defendant hitting her with a hammer. It was my hammer. I used to work on bicycles with it."

Mendes told the court he saw Alcantara hit his mother once or twice in the head.

"I saw him between the television and the bed. My mother was on the bed," he testified, adding that he was standing in the doorway when Alcantara turned the hammer on him.

"The first time he hit me with the hammer I felt my head to see if I was bleeding. The second time I saw blood," Mendes said.

He said he then tripped over something, hit the wall and fell backward onto the floor and Alcantara was on top of him hitting him with the hammer and then he picked up a bottle and hit Mendes.

Mendes suffered a depressed skull fracture in the attack that required more than 100 stitches, in addition to a broken pinky finger.

He said Alcantara got up and ran out the back door, jumped over a porch railing and over a fence in the backyard, and fled down an alley.

"I ran out the door and went down the stairs to the parking lot and out the back gate," Mendes said. "I was screaming for my little sister who was staying overnight in my neighbor's house."

He said he was looking back to make sure his attacker was not coming after him.

He testified that his sister, Chebely, came out of the neighbor's house and wrapped a sweater around his bleeding head.

He was taken to Lawrence General Hospital, where police later showed him a photo array from which he picked out Alcantara.

He testified that Alcantara is the cousin of his mother's ex-boyfriend, Ysidro Santos, who also is known as Luis.

"I recognized the person when I looked at the picture and I circled it and put in initials on it," he said.

On cross-examination, Ronald Ranta, the lawyer for Alcantara, got Jesus Mendes to agree that he didn't hear any "loud commotion" as he walked down the stairs, and that when he saw his mother being hit with the hammer he was in shock.

Ranta also was able to highlight inconsistencies in Mendes' statements to police that when he opened the bedroom door he didn't know what hit him.

"I don't know how I expressed it," Mendes replied. "When he hit me I knew what hit me."

Christopher Mendes testified he had asked his mother if he could spend the night at a friend's house, but she refused and he stayed home.

He testified he had initially gone to sleep in his mother's room, but she woke up at some point during the night and turned on the television, waking him up, so he went upstairs to sleep in his sister's room.

Christopher Mendes testified he woke up hearing his brother yelling and he heard another voice he did not recognize.

"I went downstairs and saw the guy, Luis' cousin, on top of my brotherâä who was on his back on the floor trying to cover his face," Christopher testified. "Luis' cousin was hitting him with the hammer, but he lost control of the hammer and grabbed a bottle and hit my brother with it."

Christopher testified he ran to his mother's room to try to get her attention by moving her leg and shaking her leg, but she did not respond.

He said that Alcantara then threw the bottle toward their dog.

"My brother was still under the guy. The guy started running. He went out the back door and jumped over the porch railing and the back fence."

Christopher Mendes said his brother had gone across the street so he went back inside to his mother's room and tried to get her attention again.

He testified he touched her head and shoulder and then realized she was injured.

He told the court he went upstairs and grabbed a baseball bat, went back downstairs and out the front door.

Sgt. Sandy Picard, the first officer to arrive, testified she saw Christopher Mendes coming toward her with the baseball bat.

Picard testified they attempted to enter the back door of the house and encountered Princess, and she told Christopher to lock the dog in the bathroom.

"He took us to his mother's bedroom, where I saw a woman on the bed facedown he said was his mom. She was lying across the bed with her head hanging over the edge and her arms were hanging over her head," Picard said.

Picard said when she checked, Sastre had a faint pulse and noticed a large, open head wound with hair matted around it and brain matter showing, and brain matter on the floor on the other side of the bed.

She said paramedics and EMTs arrived and she stepped out of the way.

Accused claims he was kidnapped

While this was going on, she said dispatch called her to tell her a man had called 911 saying he had been at the house and was at the Hess gas station at 615 Broadway claiming he had been kidnapped and robbed.

Picard testified that she sent Officer Carmen Purpora to check the man out and bring him to the police station.

The man, later identified as Alcantara, told police four men entered the house, struck Sastre with the hammer, and then kidnapped him and put him in a car, where they began to rob him of his clothes, wallet and cell phone.

He was clad in a blue shirt and boxer shorts when Purpora found him.

Christopher Mendes was brought to the police station and placed in an interview room, where he was when an officer walked Alcantara by the door to the room.

Christopher Mendes told police that Alcantara was the man he had seen attacking his older brother.

On cross-examination, Ranta got the brothers to admit that their mother had broken up with Santos, her boyfriend of five months, a day or two before the slaying.

The brothers testified that Santos was a frequent visitor to their home and Alcantara would, from time to time, show up with him, and they introduced themselves as cousins.

The trial is set to resume today.